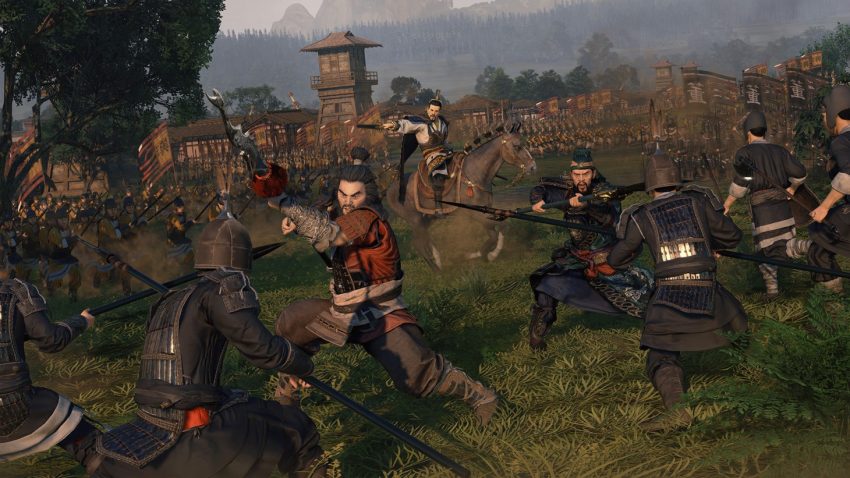 This is a beginners guide for Total War Three Kingdoms. Tailored more towards players that have some common knowledge of Total War games.

First of all. This is not Warhammer. Its not Rome. Its not Shogun. Three Kingdoms brings lots of new elements to the table and the overall playstyle is different from previous titles.

Why? Lets break down the big game mechanics.

Its the core of the game. Turn 1 for many factions you can enter trade agreements, get payments for food, sell off unneeded items and give yourself a better position. Its now all done with literal numbers dictating the deals. These numbers are altered by how much they like you as a faction/character, how well the war is going against you (if at war), how strong you are as a faction and more. On harder difficulties the other factions will get more units which can easily lead you into tons of wars unless you keep your forces strong/join a coalition/play it safe.

Yuan Shao starts coalitions very early in the game, but usually ask for tons of resources to join and then may pull you into too many wars. At the same time having him as a buddy can easily solidify your position. The same can be said for the Bandit Queen whom you can pay Tribute for peace at any time – giving her 35% of your income (from your building/pop only) is barely anything early on. The same can be said for being a vassal.

The Dong faction (hah) usually sues for peace in exchange for your arms, legs and vassalage – anything else thats left you can play with. Not worth it especially since you will no longer be able to eat up the Han Empire cities.

Forming your own will likely just require some bribing/good relations/or a mixture. Note you can’t actually do this until you reach a certain rank or play Yuan Shao. 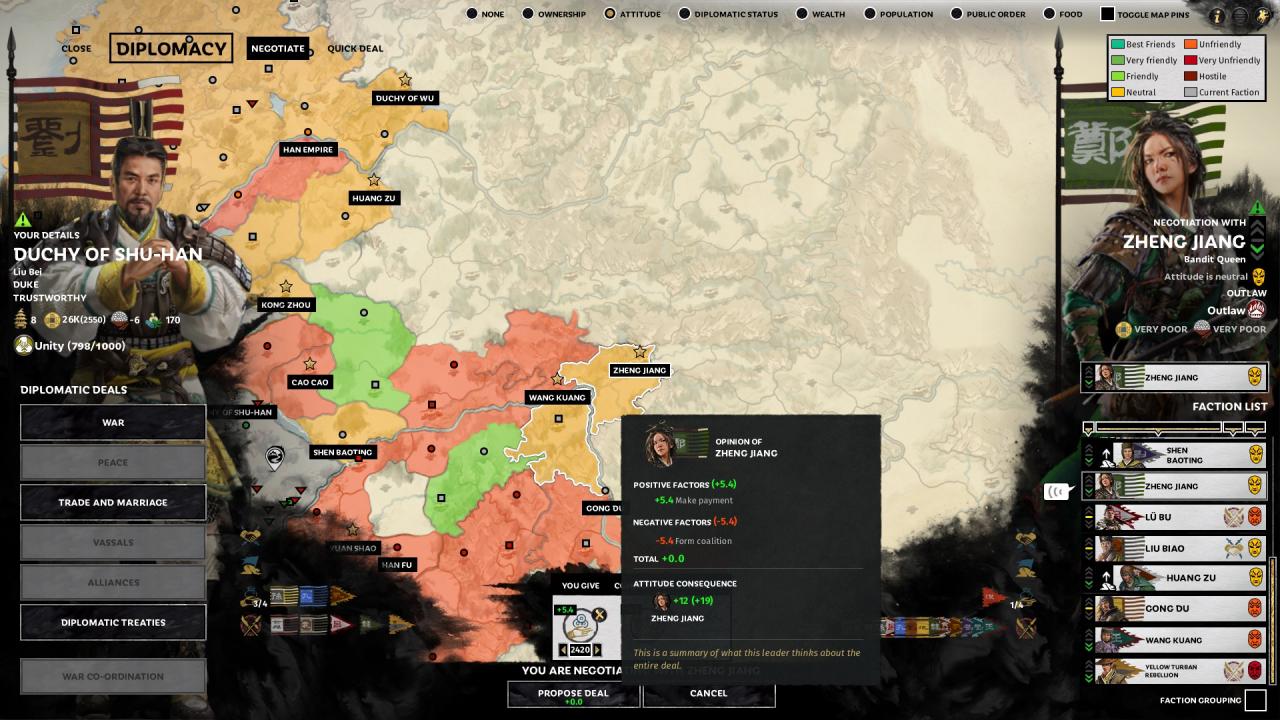 One faction pulling others into a Coalition or making a vassal can easily lead into a snowball effect. They suddenly get very powerful and will start war decing anyone not in their group. This has been one of the more challenging aspects of the game as it can start very early. It can easily become a musical chairs game of joining alliances/coalitions to survive. Or forming a defensive powerbase to ride out the storm. As Liu Bei I found myself with no allies and went to war with several factions 2-3 times while fighting them out of my territory.

And yes. Its okay to become a vassal. You might have to give up a bunch of resources for the deal, but you can declare independence later or just get released for being a good vassal/someone war decs you and your master doesn’t want to get pulled into the war. Becoming a vassal pulls you out of all of your wars instantly so it can save your territory big time. Although they may just war dec you the next turn.

As mentioned above you might want to survive in your “powerbase”. What the heck does that mean? All the cities pretty much show crap income at the start. Resource nodes (anything not listed as city/town) can have decent income, but its still not a ton.
READ:  Total War: THREE KINGDOMS - 100% Achievements

Well. That will start to change after a set amount of turns (probably 10-25) and starts to change quickly as more and more reforms are made. With reforms/buildings/administrators/assignments/etc, your population can grow at explosive rates. We’re talking 20-50k a turn. Who cares about population? Hah. You should. At high populations cities will start generating ludicrously higher amounts of income from peasantry. Adding in bonuses from buildings/assignments/administrators can easily lead to cities giving you 1k+ income each. 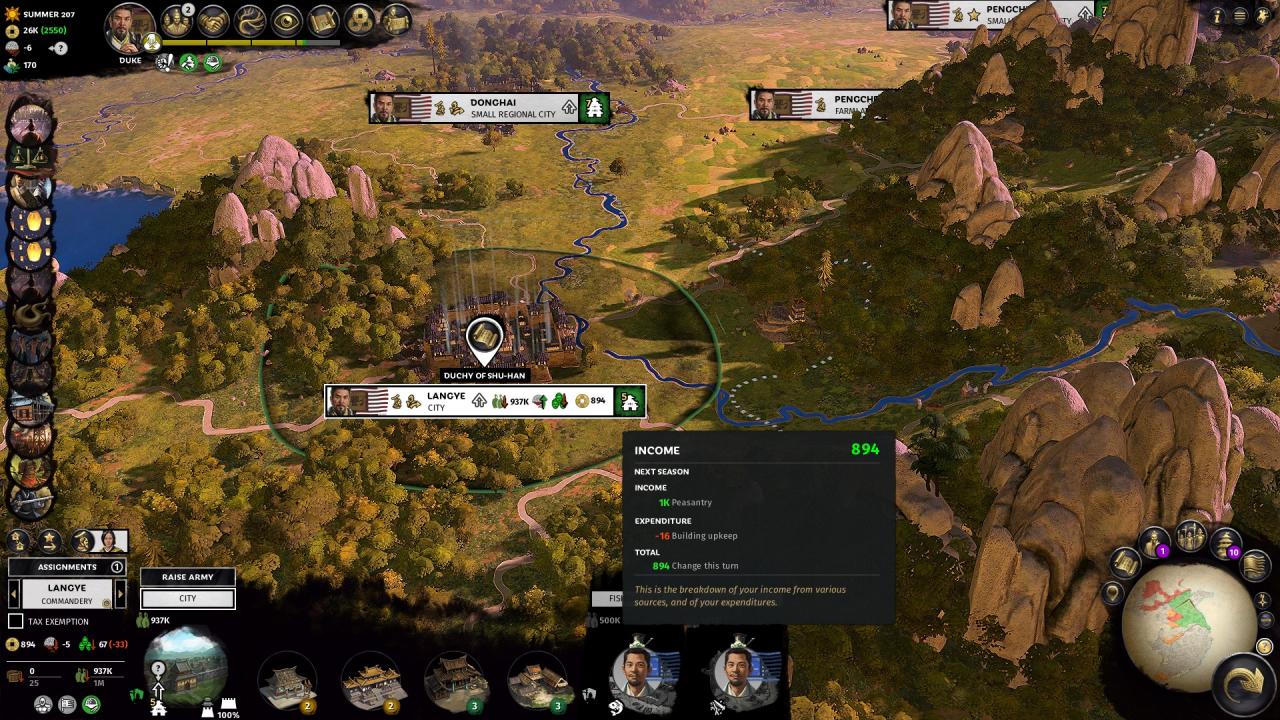 Did I mention your really bad replenishment rates will get much much higher as well? Did I also mention that your garrison will get larger? Bigger settlements make all the difference. Resource nodes get much larger garrisons very early in the game which can really help with surviving. Once cities hit large/regional they get 4-5 buildings so you should easily be able to add a garrison structure on top of whatever you want giving them a pretty powerful defense as well.

The reason I use the word powerbase is because losing a city means by the time you take it back its lost 20% or more of its population. Twice. You want to defend these cities like your life depends on it. Because it does.

China features many areas (even in the middle of the map) where you can build along rivers/mountains/etc. to help you survive with natural barriers. Its also good to make non-aggression agreements with sides you don’t plan/need to war with anytime soon. However, these can and will be betrayed. Coalitions/Alliances are much more solid.

Also note cities/nodes that are tied together do share public order and buffs. You don’t really need to take over a full set (commandery i think is the term) like Warhammer/Rome. Its fine to simply own part of it. Do note administrators can only be garrisoned in cities and you will likely want the full commandery in places they are stationed as they buff the city and all of the nodes in the same commandery.

Lets talk about your characters/officers in your faction which is probably one of the more overwhelming things upon starting the game for the first time.

First of all. Whats a Retinue? Instead of armies being tied together by their general – they are now linked to characters. Up to six units each. Up to three characters per army. Total army count is 21 units if you include characters (some of which can kill hundreds of soldiers each battle). Characters keep their retinues when switching factions/being reinstated/whatever. Its extremely relevant because some characters have access to some truly powerful units or skills that buff certain types of units. Make sure to utilize your characters to their fullest! Also note upon a unit being killed it will replenish in 2 turns free of charge! However, if the entire army is wiped out/you disband your character it will require you to buy back the character and all of their units which can be insanely expensive. 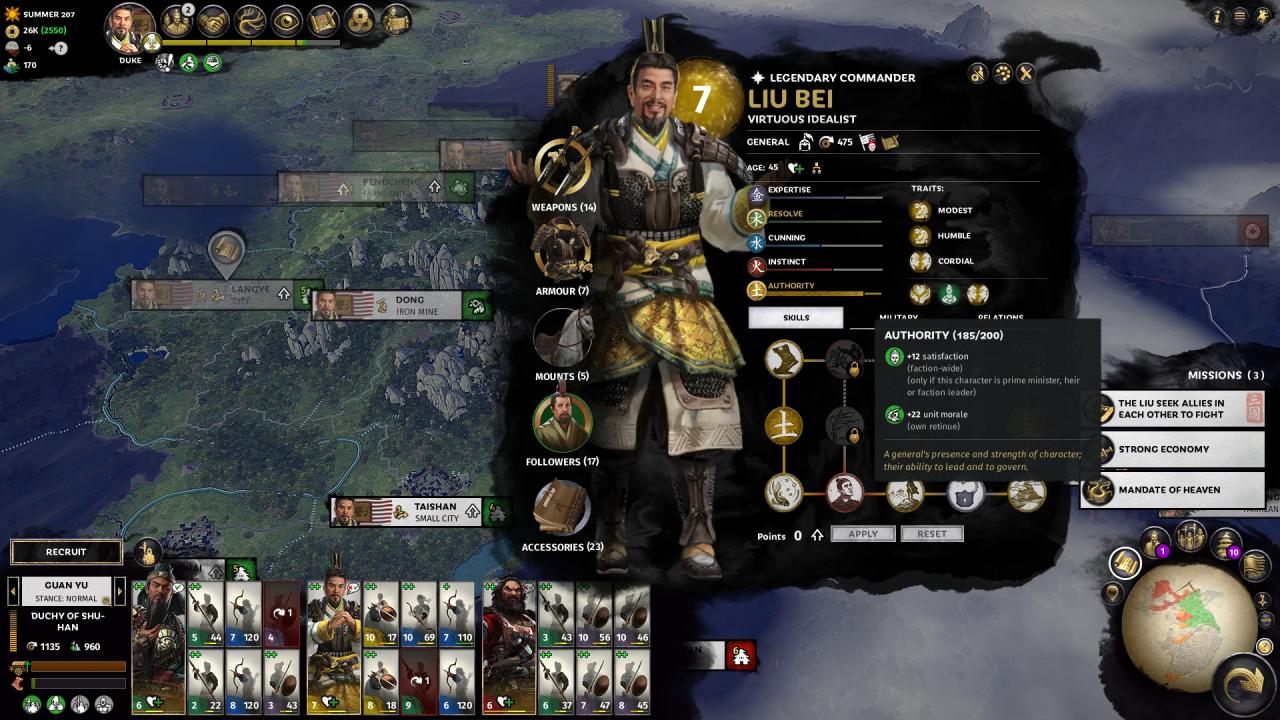 Warlords: Faction leaders with high authority means you get a passive satisfaction bonus which is extremely helpful. For leaders such as Liu Bei you barely need to even look at satisfaction because its almost never an issue. You can increase authority with skills/items a an extent, but most is from the character’s class which you can’t change. 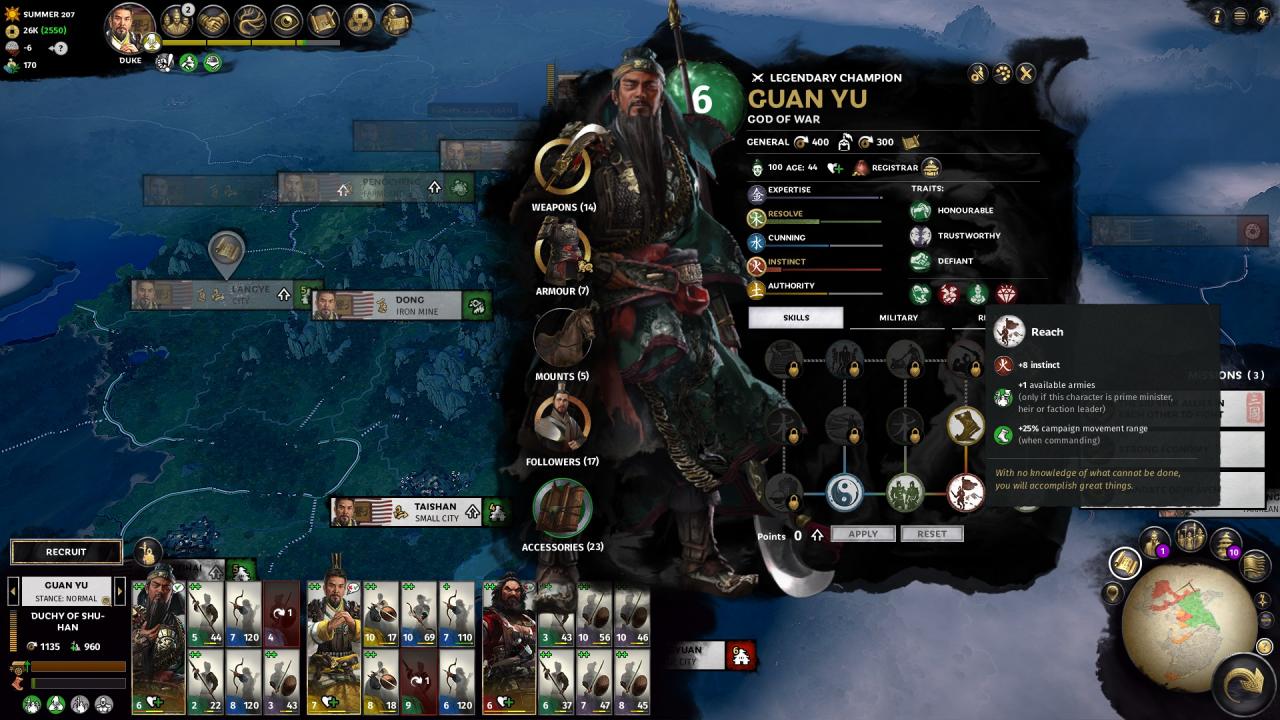 Commanding Officer (general): Having a commanding officer in an army with the right skills is CRUCIAL at the start of the game. Some officers don’t get anything to buff their army. Others start with replenishment.increased campaign movement speed/etc. Having the right skills on your commanding general makes all the difference. At any time you can switch generals. So if you have one general good at campaign movement you can move around with him. If another has good battle skills you can switch after they have moved. It makes sense to let your officers do what they are good at when they are good at it.

Free Officers: Have 10 Officers sitting around doing nothing? Thats not good. You are paying them. Even if they have no assignment and have only been recruited into your faction. No matter what they are doing – you are paying those wages.

Assignments: At the start of the game you can send any officers sitting around on assignments (done at the assignments tab on the bottom left while a city is selected). Depending on their skills they can do different things such as increase income, reduce build cost, give public order and more. Theres no reason not to utilize this as its completely free. You just need an officer sitting around not doing anything. As your rank increases/faction leader gets skills/etc. you can have more assignments going at the same time. Income from peasantry +50% sounds terrible at the start….but not so much when a city is giving 1k+ income from peasantry.

Administrators: This is one of the really confusing things that isn’t explained overly well. You will see an administrator button of a face wearing one of their scholarly hats on the bottom left (its small). You can’t actually use this until an administrator position is available. Once your rank increases/you get a position open – you can assign a free officer to be an administrator at a city of your choosing. They will provide buffs for everything in that area. NOTE: They will take their entire retinue as a garrison for the chosen settlement FREE OF UPKEEP. It does cost a little more wages to put an officer as an administrator, but its extremely worth it when considering they are a free garrison. These guys give really good buffs and depending on skills/stats they are improved further. You should put them in your most developed settlements or ones you want defended with their retinue. 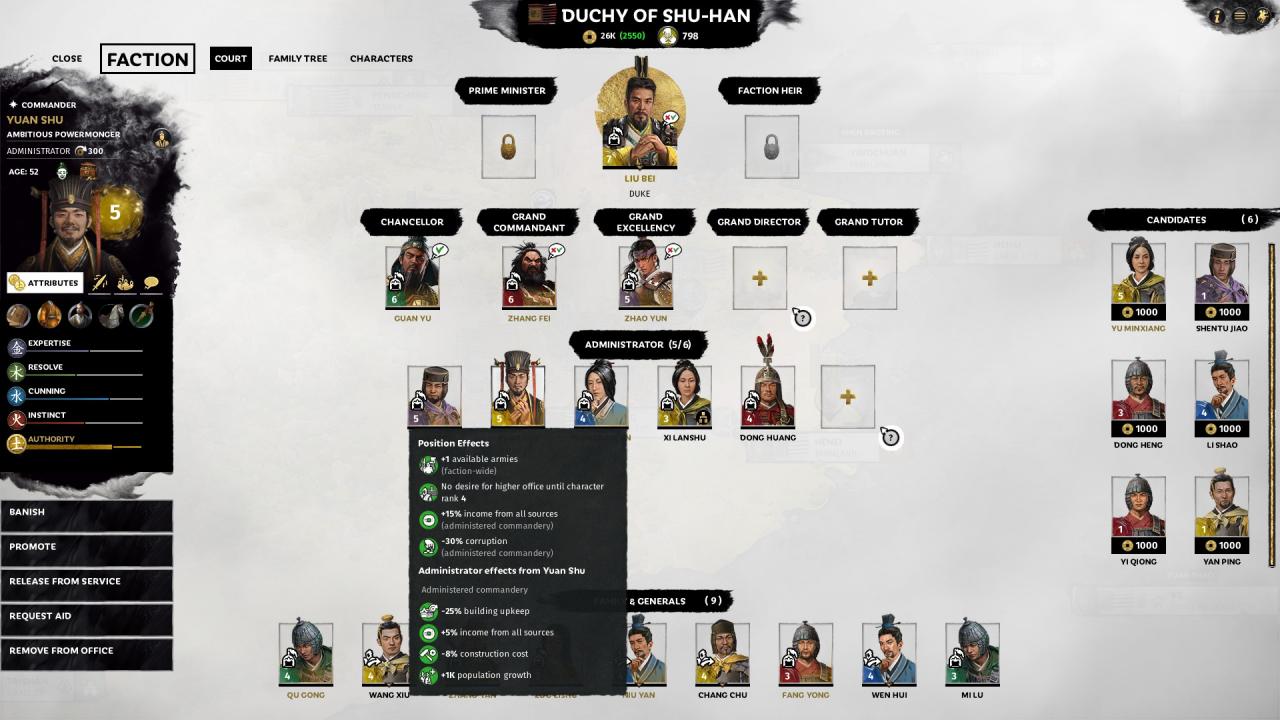 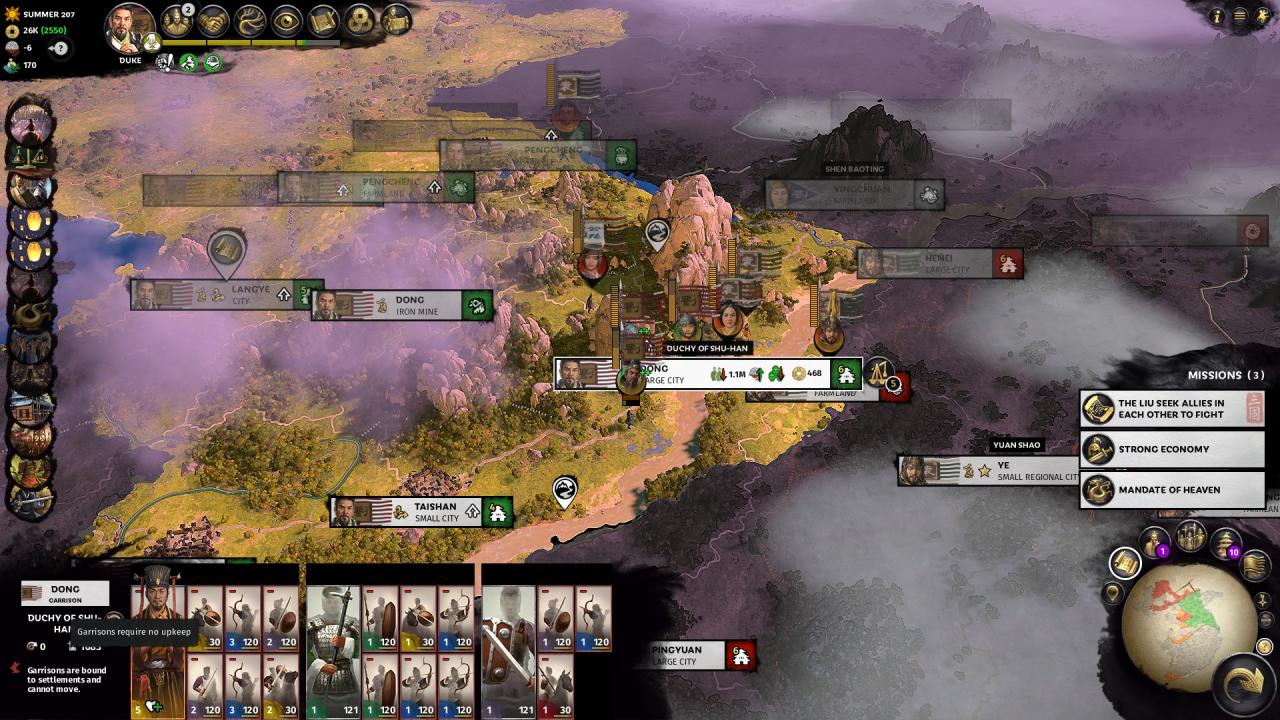 Court Positions: One of the coolest aspects of the game is adding officers to your court/council. Your council will literally give you missions as requested which are usually fairly easy and give good buffs for your entire faction (all the ones I saw lasted five turns). There is a cooldown between being able to request missions, but its quite short. 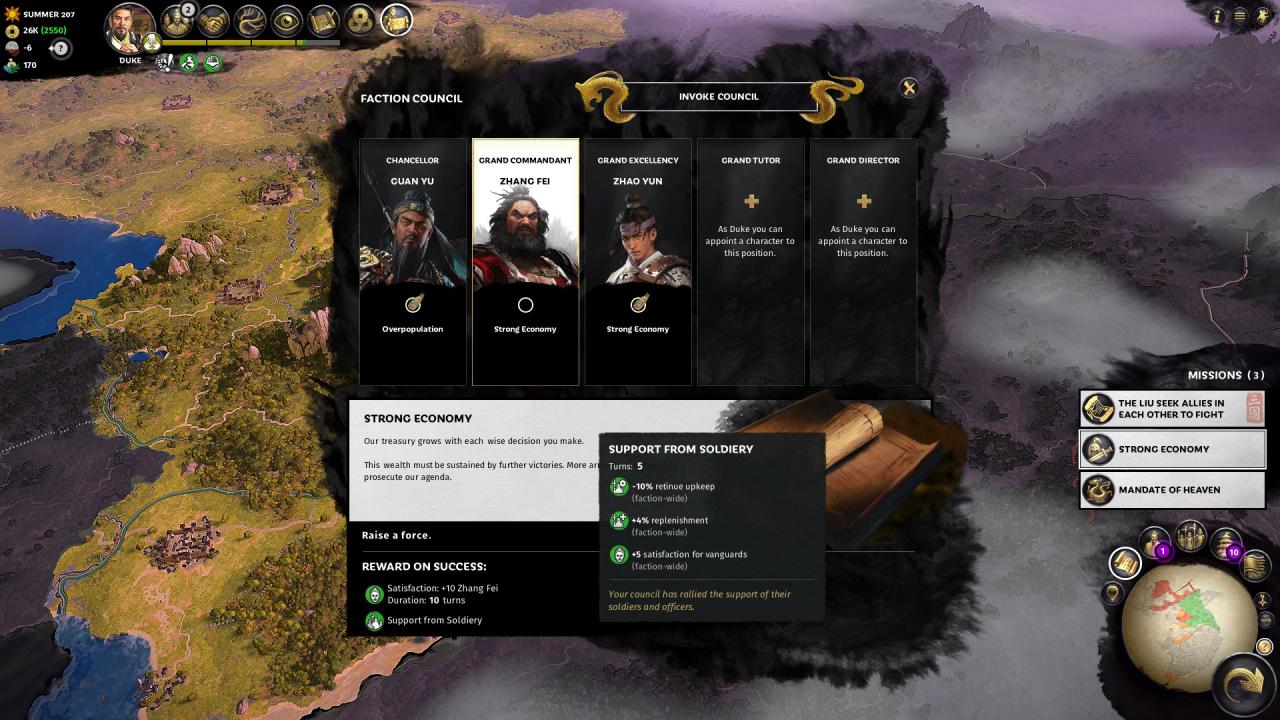 Satisfaction: Some people are just never happy. You’ll have plenty of officers that are just a complete pain to keep happy. Free officers that remain unhappy have a chance to leave your faction. Administrators/Councilors can straight up cause a Civil War. Its important to keep them busy, give them items, appoint them to positions, promote them, keep people who like each other in the same army, build satisfaction buildings (when available), get satisfaction reforms and whatever else to keep these people happy. You can’t pair up every officer because they will believe in different things due to their traits. All characters have 3 traits, but can get more from how they act/by events/randomly.

Those are (in my opinion) the three biggest features you need to know about for three kingdoms. Other features such as the choices you’ll make in each campaign I feel are best left out of a guide like this.

There definitely more and if requested I can finish up the guide with several other important mechanics such as campaign map movement/stances/classes/etc.

Hopefully these basics will help someone out there – I’m a TW vet and it felt like a lot of changes for me. For instance public order isn’t really an issue in this game while it was one of the most difficult aspects of Warhammer.

Overall I’m loving the game. You’ll find yourself at war one day and allies the next. Enemies closing in from all sides one moment and the next you have the power to decide who lives and dies. So far the factions that do well seems to change quite drastically so you never really know what will happen next.

Best advice I can give: Don’t just fight your battles with troops. Fight them with diplomacy too.

Good luck and have fun!