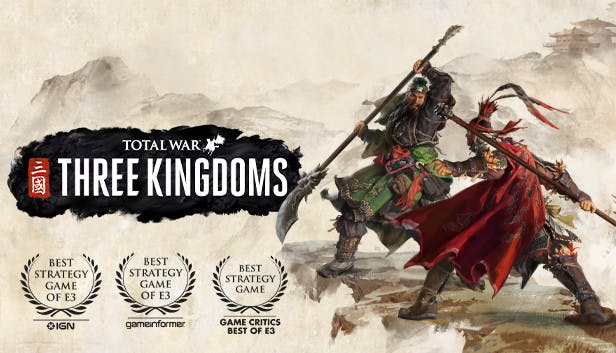 The trade port and Jiang ling are to be utilized as choke points. Liu Biao and Cai Mao will attack Jiang ling. Huang Zu or whatever Liu Biao’s other vassal is called will usually attack the trade port.

We will have Sun Jian ambush stance by Jiang Ling while the trade port’s units and towers can fend off Huang Zu early game.

This guide is done with no other items equipped besides the imperial seal and the starting items.
This is to say that you can have better results by equipping your characters with items.

You should probably not agree to support Yuan Shu’s legitimacy, as he gives you too much vision. 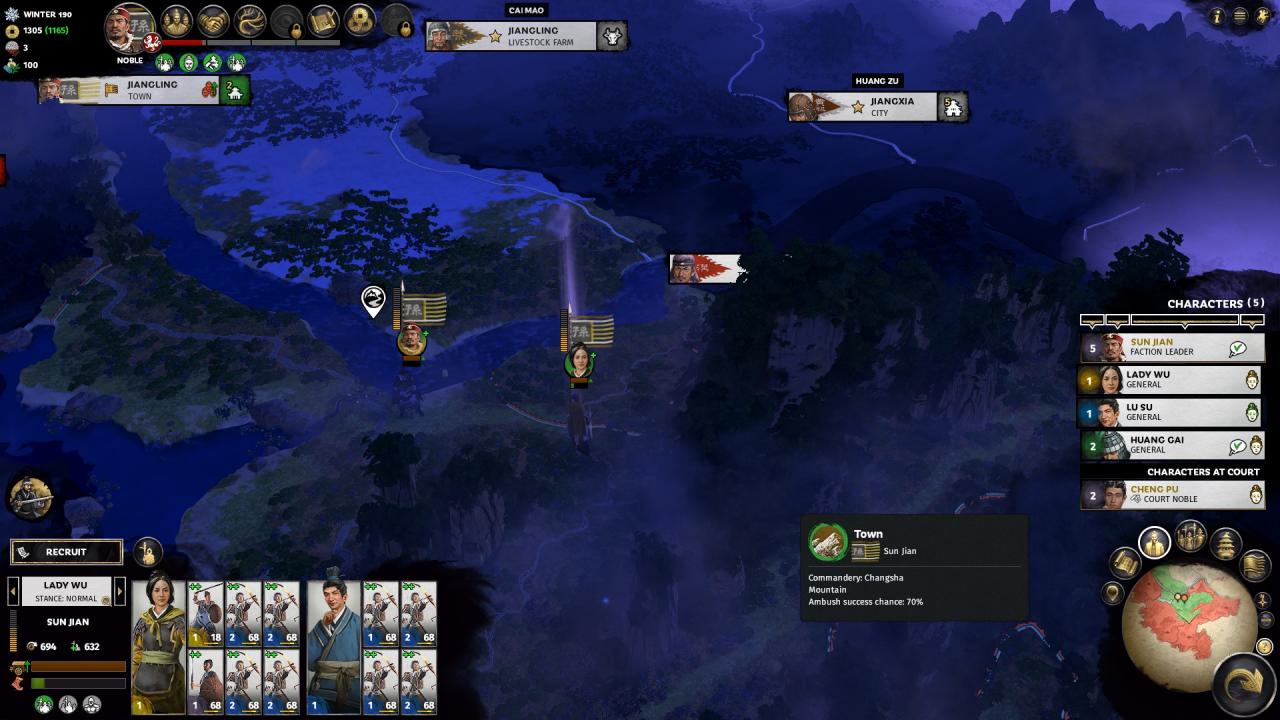 If Lu Fan shows up, hire him for Sun Jian and give him archers. If not, hire archer militia for Huang Gai. Save enough money for Lu Fan.

Turn 4
Have Lady Wu attack the trade port and starve out.
Then move Sun Jian behind her, should be close enough to reinforce.
Then delegate the battle.
If you have Lu fan hire him and recruit archers for him, otherwise, just leave it. 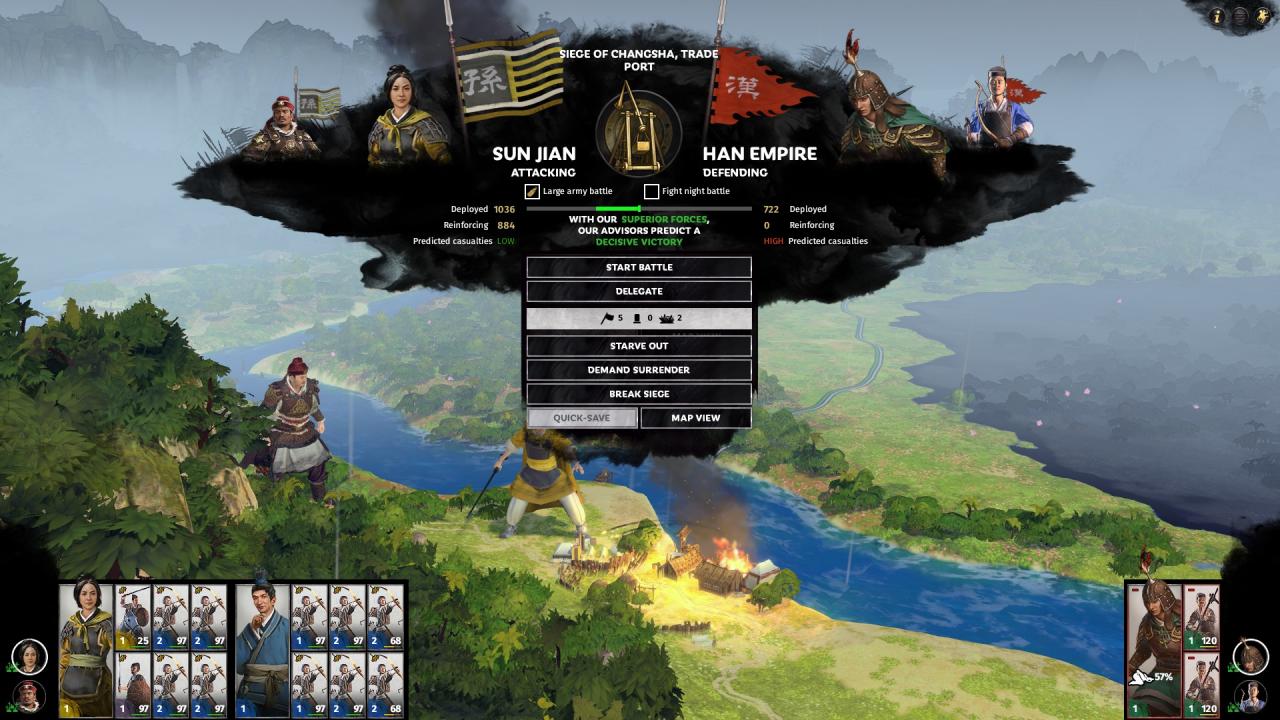 Turn 5
The imperial seal dilemma should trigger on this turn. Decline him and go to war. This guide is based on keeping the imperial seal. Although giving him the seal and signing for non-aggression, etc, would lead to an even easier campaign.
Move Sun Jian towards Jiang Ling and Lady Wu towards armorsmith.
Hire Lu Fan if you haven’t already. If he didn’t show up, hire any random strategist.
Recall Cheng Pu from assignment. 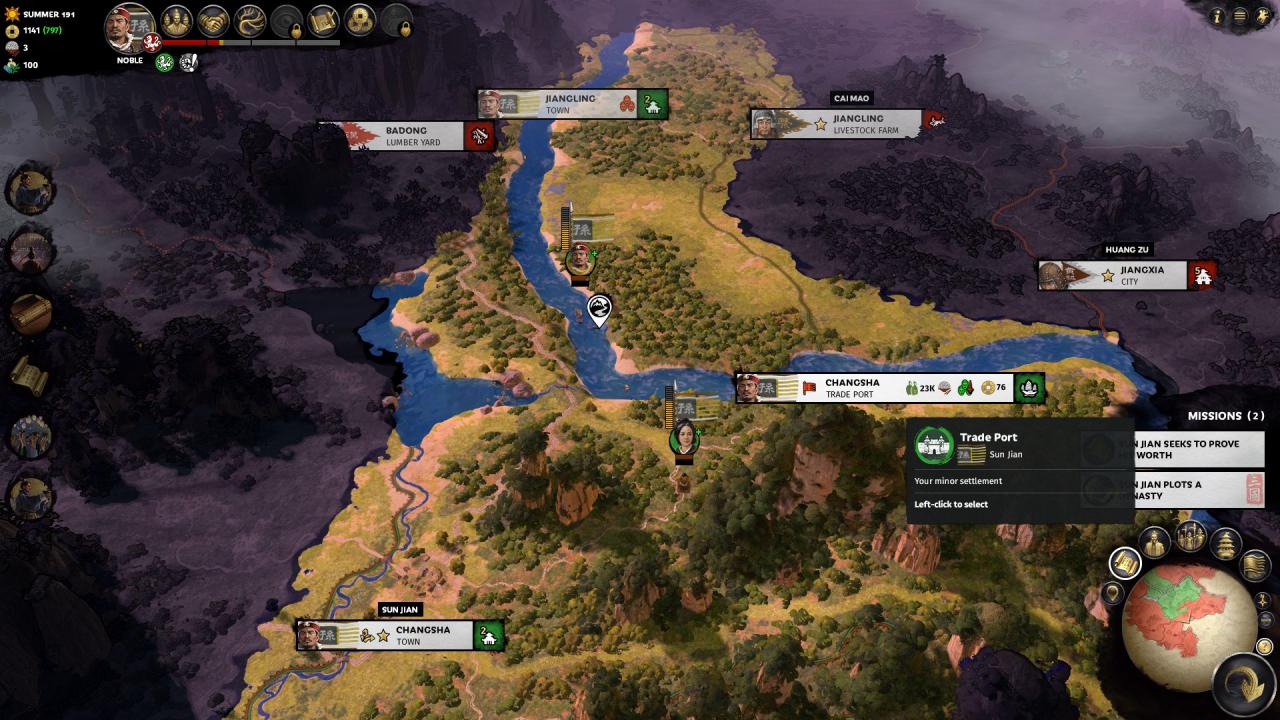 Turn 6
Move Sun Jian to Jiang Ling and recruit a strategist. Load up Sun Jian’s entire army with archer militia.
Move Lady Wu towards armorsmith again.
Have Cheng Pu go back on assignment at Chang Sha, we will be upgrading the trade port shortly.

Turn 7
Have Sun Jian in ambush stance and Lady Wu head towards armorsmith.
If you can afford to upgrade the trade port, do so. If you are rich enough to instant construct, you can do that too. 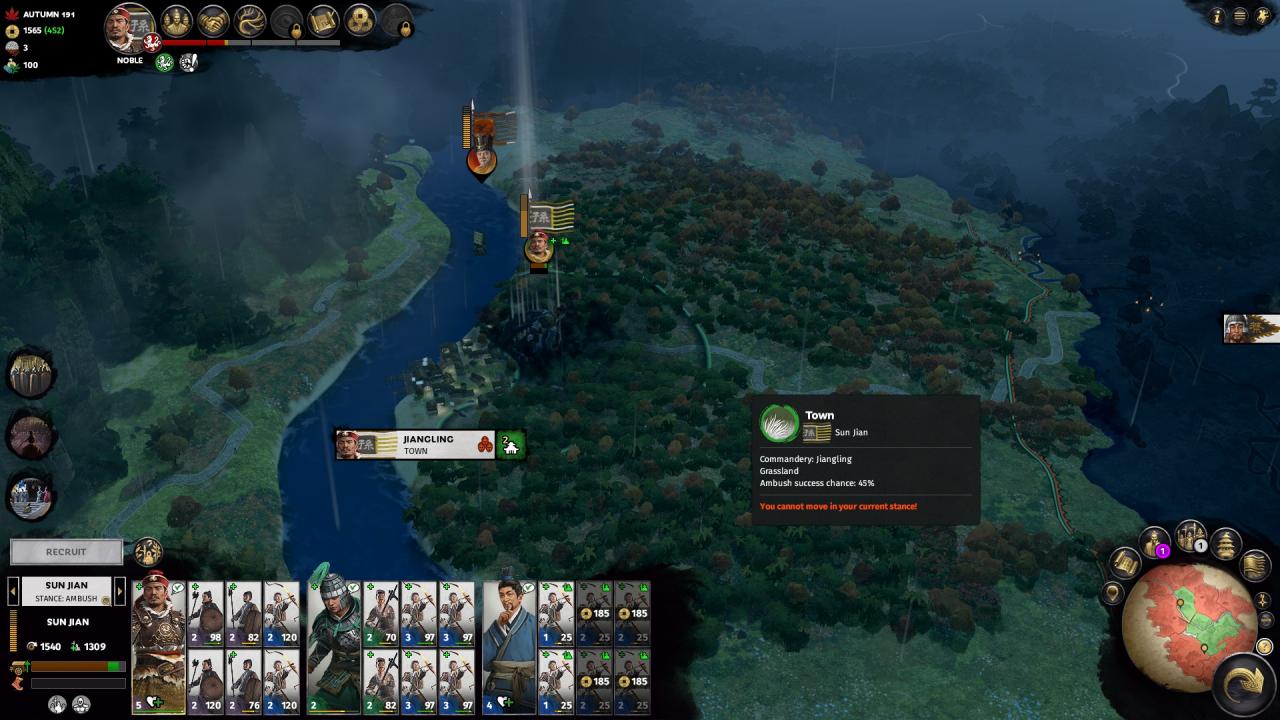 This will be Sun Jian’s permanent location for a large portion of the game. 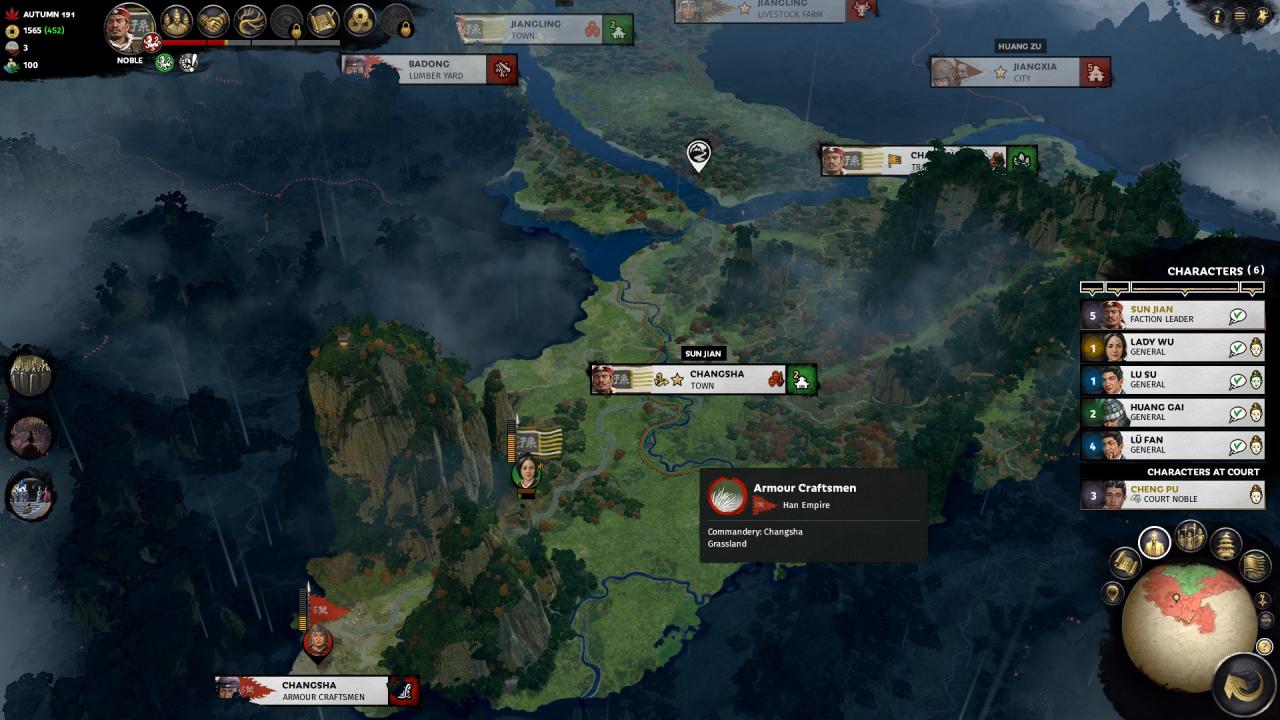 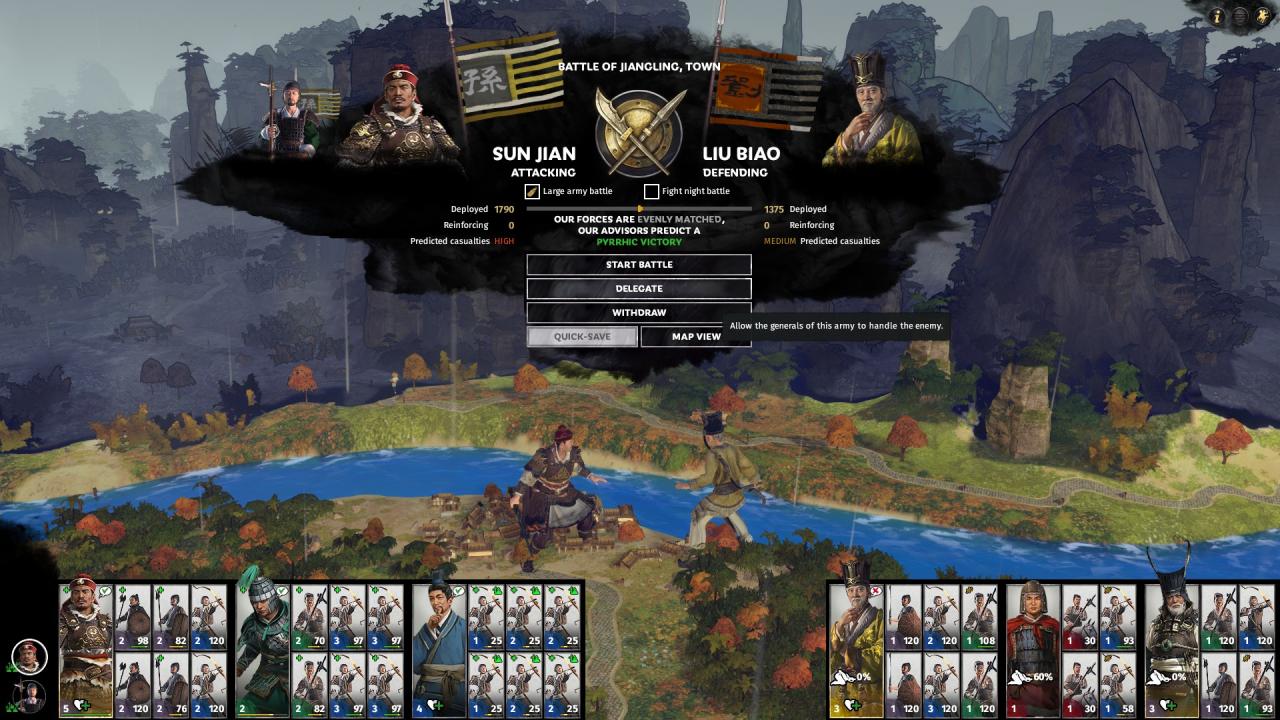 If you want to fight this battle, be careful of Liu Biao’s bow, it hits like a truck and the target is usually Sun Jian. You can dodge it pretty easily by moving your unit back and forth. 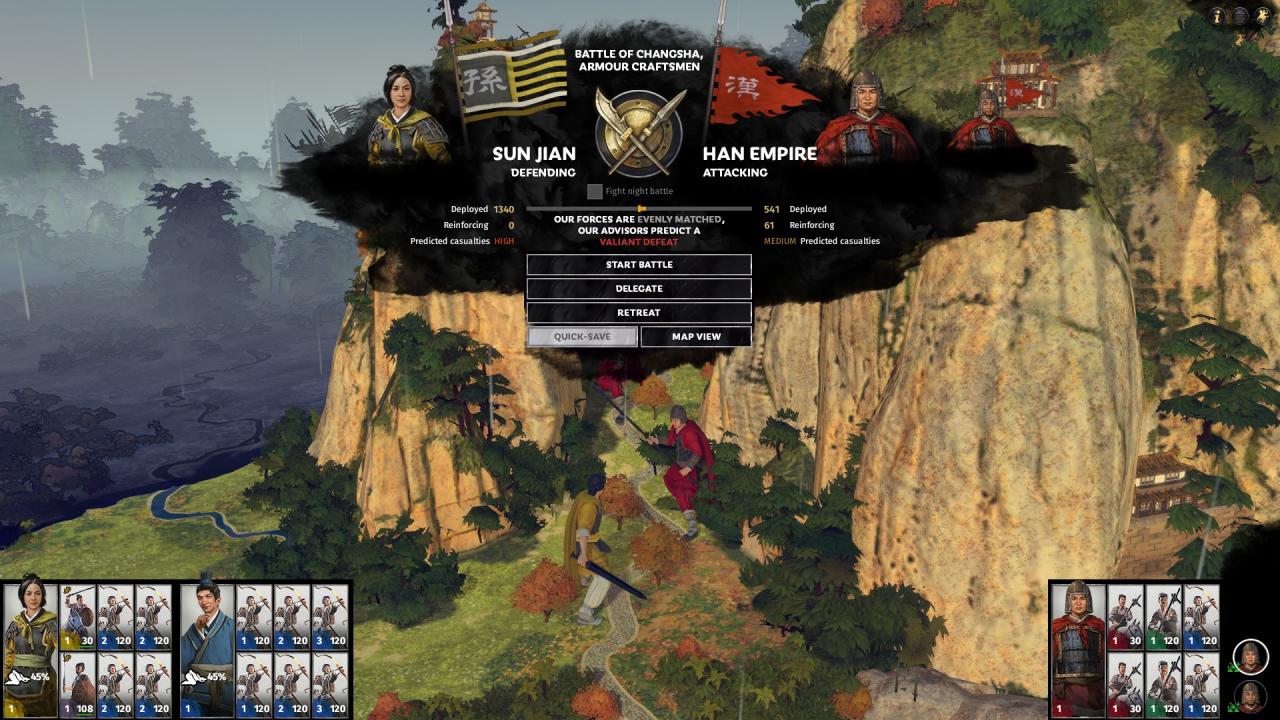 You have to fight the Lady Wu battle, it’s pretty simple with all the militia archers you have, his units should be dead before they do much of anything.

Turn 8
Have Sun Jian go into ambush stance by Liang Jiang again. You won’t be able to reach Liu Biao through the woods. If you can, it should be a simple auto battle.

Have Lady Wu take over the armor smith.
Upgrade Trade port if you haven’t already.

Turn 9
If Liu Biao is still around and you can reach him, kill him, otherwise Liu Biao should be fleeing home to recuperate.
Have Sun Jian ambush camp by Jiang Ling
Have Lady Wu heads towards the tea garden.
Upgrade trade port if you haven’t.

Don’t take any vassals unless you’re strong enough to fight the world. (I mean it, having a vassal means the whole world will soon declare war on your vassal, and hence, you.)

Don’t execute anyone unless you are getting something extremely valuable. You can hire them and release if the option is available.

If your commanderies is about to rebel, you can turn of taxes for one turn to gain +25 public order. (you will probably have to do this for Chang Sha soon)

Sign peace with Liu Biao when you can. Our focus is conquering the south. The south has a lot of fertile lands, Chang Sha can be upgraded to give 3k income easy and can reach 6k.

Don’t wipe out any factions early game if you can help it. Eliminating factions off the map actually gives a lot of negative diplomatic repercussions.

The less vision you have of the enemy, the better. If factions don’t know you, they can’t hate you or declare war on you. You should never take Yuan Shu’s bribe for legitimacy early game, as it will reveal new factions.

Most early game income actually comes from battles, so be aggressive against the Han. Your goal is to conquer as much of the Han’s territory before someone else takes over the emperor. Then you can decide on whether to go to war against the Han’s new owner or you can trade for the han’s territory.

While conquering the han is fun, you should leave some of the han alive as buffer between yourself and powerful factions such as Cao Cao. When you aren’t bordering other factions, they seem to have less reasons to declare war on you.

It is recommended to conquer southwest instead of to the east. Heading east opens up more locations where you can be invaded. Xindu’s fishing port and Poyang Iron mines are two more spots. The reason we keep Jiang Ling city is because if we don’t, enemies that sail down the river will usually head towards Chang Sha city instead of the trade port. We can move Sun Jian to Chang Sha in ambush to counteract this if you lose Jiang Ling. It is recommended to upgrade Chang Sha trade port for better garrison as soon as possible, and later on, you can station an army there as well.

You can either build commerce or industry. It is recommended to build commerce, as industry requires you to take Poyang and the right side of the map. Chang Sha is commerce and there is another rich commerce spot near Shi Xie. Building commerce can also branch into spice when you are near Shi Xie.

When you have surplus income, you can hire a cheap unit to take over the Poyang weaponsmith.
When you are at peace with Liu Biao or can move Sun Jian or another unit, take over the Shang Yong Weaponsmith.

Ancillaries are best utilized for diplomacy, you can use them to sign agreements or to trade territory.

Shi Xie and the rest of the minor factions in that region are great for being vassals if you can take them. They are cut off from the rest of China and won’t hurt you as bad as other vassals.

Play the diplomacy game as best you can. Try to bribe the factions closer to you and make them happy first.

There’s no reason to be the first to become emperor. You should bide your time until you are ready to either snipe all three thrones at once or are strong enough to fight them.

It is recommended to have generals who have counteract corruption assignment. It is -50% and it is worth a lot when you use it on high income commanderies such as Chang Sha.
Commanders(gold), Champions(green) and Strategist (blue) have a skill that grants them the assignment option.

Don’t be a warmonger. There is no reason to declare war just to have a chance of capturing zhao yun or something. Don’t go to war just because someone beat you to a settlement, you can trade for the territory instead. You should only do retaliatory wars. Beat them back and sue for peace. Later in the game when diplomacy doesn’t really matter an you are super rich, you can declare all the wars you want.

You should upgrade Sun Jian’s army to better units later on, there is chance that Lu Bu might show up if you are unlucky. You can also upgrade Jiang Ling’s garrison. When you get a chance, you can also build a mercenary outpost at Jiang Ling for better replenishment.

I finished my campaign at 215 AD. You can take as long as you need to or be as fast as you want to be. This is just a simple guide on how to get started.

Your first goal for research is to get the 10% replenishment reform. 10% let’s you play a lot more aggressively.

Afterwards, you can get the trade route reforms and income boosting reforms. (commerce, spice, industry)

Later on, you can get the reforms that let’s you build the building that grants the resource to upgrade your weapon and armor smiths.

You can also get the copper mine rank 5 anti corruption bonus and the public order/corruption chain.

Early game, the bests units are archer militia.
They are cheap, everyone can hire them, and they are far more cost effective than any unit in game. (except spear guards with turtle formation, those things are overpowered)

Your leaders should be strategist , vanguard/champion (Reach and flexibility: campaign movement range and replenishment bonus when commanding), flex.

Your army should consist of archers, 2 trebuchet, spear guards if champion / mercenary infantry if not, and whatever else you like.

There’s not really any reason to hire expensive units in this game, they are usually only a little bit better than the previous tier and are probably not worth the price. Heavy spear guards are marginally better than spear guards and cost much more.

The best example would be Kong Rong’s special unit. Thunderer’s of jian an are only slightly better but are almost double the cost of Fury of Bei Hai.