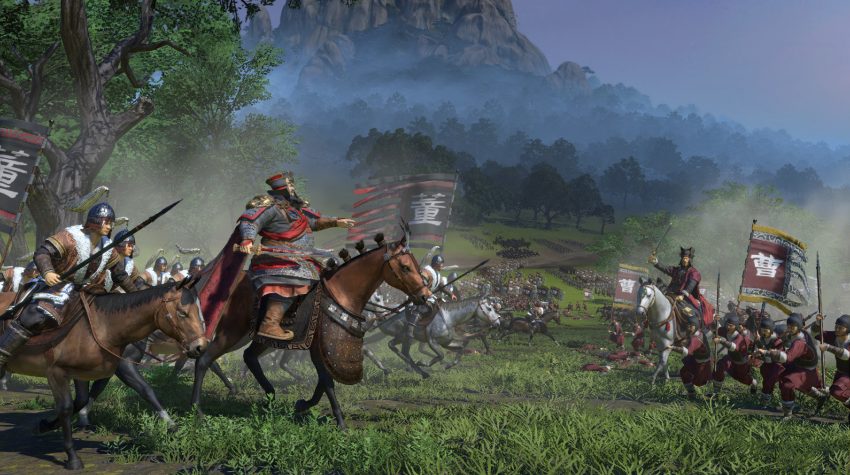 Guide for the first few turns of the big dongs campaign.

Check and see what ancillary’s you, and Zhang Lu, Liu Biao and his vassal Cai Mao and the han., have, if they have decent items then save and now we get into the dirty work….

Trade with the han, use intimidation, grab all his gold aka 2k and an ancillary if he has one that wont cause you to go over negative factors in the trade, once that is done trade with cai mai and liu biao, use gold per turn and get all their gold, then individually grab each ancillary they have by doing gold per turn, why not in bulk? cause you give 1+ factor from each trade, which in turn means buying ancillarys 1 at a time is cheaper.

Now you should be set up with decent income and such right? Nope we not done yet… your son is useless as an heir, so we gonna make him useful… go to Ze Rong and request a marriage agreement to Dong Min, pay him in some of the useless ancillary’s you got, for me i only had to give 3 browns, and a lil gold per turn.

Now we are done with trade for now, send your 2 legendary generals to attack the toolmaker but don’t fight yet, this is just so you can get a save, split the 3 generals that is next to Chang’an, send Ni Fue to the river in normal stance and then once hes in the river put him in forced march so he can cross to the han’s capital this turn. Move Guo Si and Li Jue a little bit closer to Chang’an right next to the tiny river there, disband guo si’s units and click swap him with Dong Min, split Li Jue from Dong Min and put him in forced stance and move him to the trade port, you should be very close to it.

DISBAND ONLY DONG MIN’S INFANTRY, move him to your capital and make sure he can head to the silk trader of yours this turn. Make ZE YUE THE HEIR BEFORE PROCEEDING!!!

As the heir she gives you -2 construction times… a godsend considering what we will be doing in the next few turns XP.

Now trade with Zhang Lu and give him the silk trader in exchange for his ancillary’s {may have to give him a little cash to get a 2ed ancillary} or grab cash from him. Once that is done declare war on him and send Dong Min at the silk trader, seige and EXECUTE Dong Min, putting Dong Zhuo as the leader of his retinue, basicly saving you 7k in deployment costs, now funny enough even though Ze Yue is your heir she is somehow not related to you… which means you can’t use her to ♥♥♥♥♥ herself away to other factions generals…. yet. Just take back the silk trader or raze it if you want, personally to me the silk trader is useless except for some reason the AI loves to attack that place even if they are coming from the river. Now disband EVERYONE’s retinue, disband Dong Zhuo and finally attack the toolmaker, make Zhang Liao the commanding general so he gets more exp, you will automatically get a heroic victory, if you didn’t then toggle night battle and you should. Once that is done swap Lu Ru and Dong Peishan. Put all your ancillarys on your guys, ideally you want highest possible purple on Peishan and Zhang, make them administrators, then disband Zhang, then Peishan’s retinue and 1 archer from Li Ru. Forced march Ru to the livestock and Peishan to the salt mine. 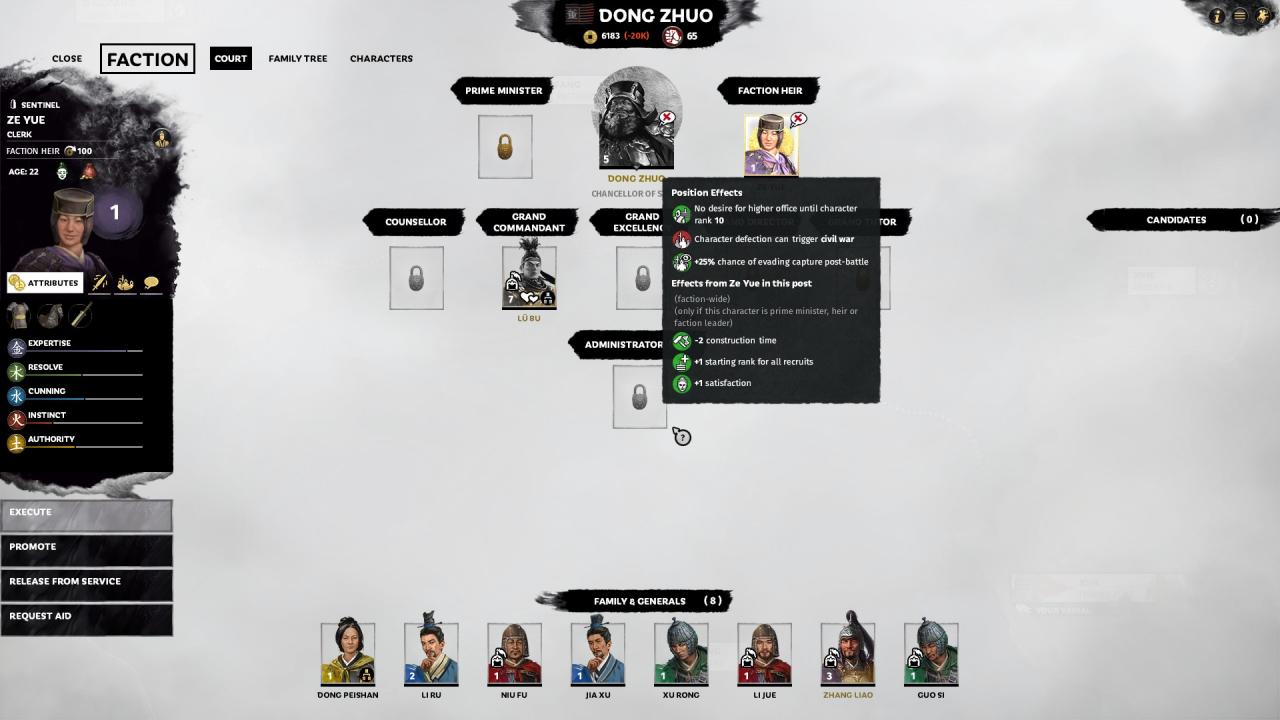 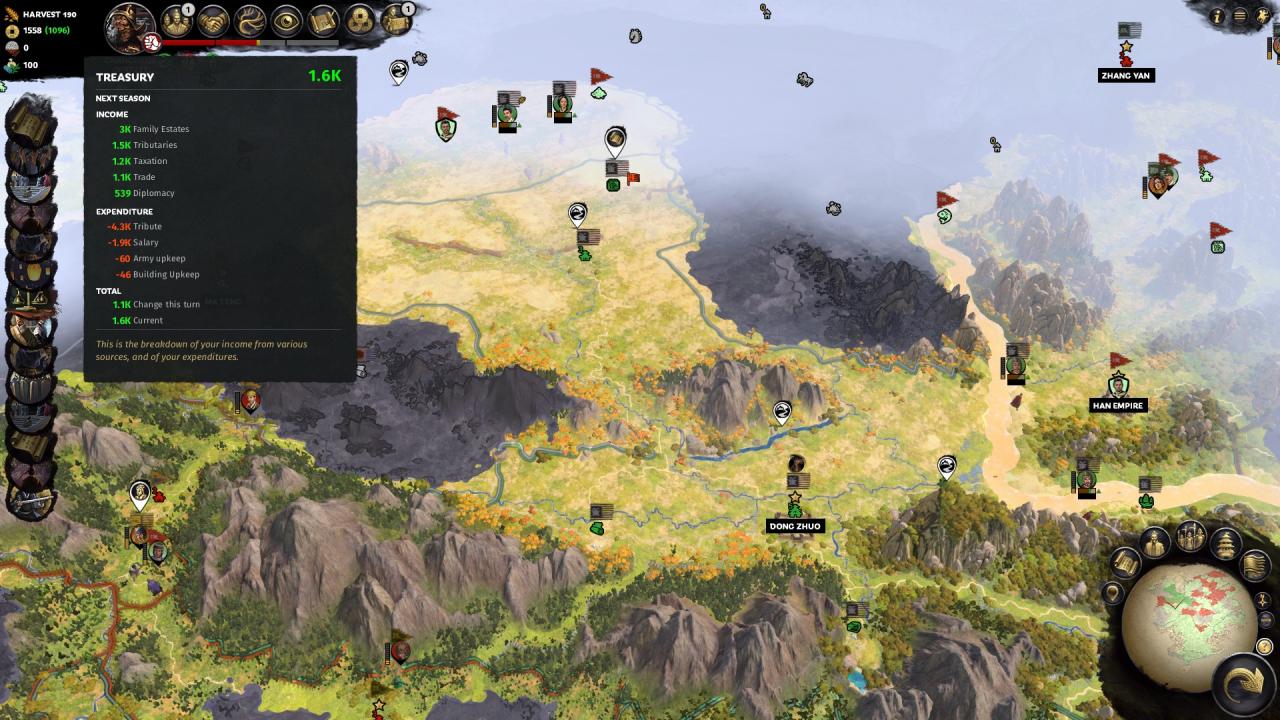 Check what you have for candidates, you will either get 0-3, a high chance of obtaining Yan Xing from Han Sui’s faction.

First things first…. Spend your intimidation for cash from the Han, you will get around 4.6k. DO NOT SPEND YOUR USELESS ANCILLARY’S YET.

With the cash you obtained trade Cao Mao/Liu biao all their cash for cash per turn, make sure you are gaining more cash then you paying them per turn, after that you will have around 15k for only losing 1.2k per turn, don’t worry, i have no intention of making you pay that off… end turn and reload the save so that you have a save at this point in time.

Move Lu Bu to Grand Excellency, Li Ru to consellor Invoke the council and send Li Ru to annex the livestock, Peishan to annex the saltmine and Niu Fu to annex Hedong’s city. request aid from Li Ru then execute Li Ru and put Yan Xing or anyone else that has a retinue in his place. Disband Peishan and whoever took Li Ru’s place/their retinue.

anyway, use your intimidation to get cash from han, execute Ni Fue, move Zhang/Lu forced march into Henei city area of protection, so that Yuan Shao will attack you, make Zhang commanding general. Get cash from Liu Biao/Cai Mao by using cash per turn, next turn you gonna get rid of thoses deals so dont worry so much.

Move Guo Si to Taiyuan toolmaker, recruit dong in his army, split dong from him and move Dong to the boundary line between toolmaker and Zheng Jiang, then add Peishan/ any other general if you have one and split peishan from dong, make an encampment at the boundary line in your land and move dong/co there. upgrade your buildings if you want. Make sure you have enough cash to cover your per turn expensives.

Yuan shao should have attacked you, manual battle, the battle isn’t hard but do try to not kill wen, you do have to kill Shao since hes unbreakable.. once the battle is over hopefully you caught someone. If not oh well but pause the game and make a manual save file by editing your save file in your folders… then resume the game and Zheng Jiang will battle you, send your generals into the forest so that they can hide and move Dong around your encampment, the towers will demonlish your enemy’s retinue/themselves, personally i killed all the generals first with towers and then use the hidden generals to take the routing units since dong will die if you follow the story.

Once that is over pray to rngjesus you got Zheng captured, why? Cause her weapon is a godsend… fatique immunity on a general with tenacy of steel for example or Zhang means he will lock down and always kill generals in duels. likewise you can put her weapon on a generic general that has tenacy and they will rock, if you didnt capture her i would honestly reload that manual save before the battle and try again.

Got cash from Han once again using intimidation, get cash from Liu Biao and Cai Mao, giving them cash per turn in exchange, raise Cai Mai with just repeatedly giving him gold per turn then give him gold per turn/ancillary and that will instantly raise your relations with him, take back the ancillary and repeat until he’s blue faced, DO NOT do any agreements that raise your relation with Liu Biao, i put a general [non-strategist] at Luoyang tradeport, moved the general outside of the tradeport and gave Liu Biao the tradeport.
READ:  Total War: THREE KINGDOMS - Generals Guide

Move Li Jue forced march right inside Yingchuan’s area of control,Zhang’s army to Ye’s farmland…move lu bu outside of Zhang’s army,Dong’s army to Taiyuan. now you gonna get at least 20+ intimidation, make sure you wont be wasting intimidation by going to your limit this turn, once that is done take all the places i said. Disband all generals at Taiyuan.

Adopt Ze Yue, then marry CaI Mao all 3 generals, gold per turn of course, marry divorce, marry divorce and then marry, notice that the other 2 of your ex husbands is a distant relative now? Thats due to marrying the 1 of Cai Mao’s generals… it also works with Liu Biao’s but his generals are useless. Add a archer to Guo Si and then execute him, replace him with Cai zhong and disband the retinue and then move Cai Zhong forced march to Taiyuan iron mine.

Deploy Cai He to Lu Bu and split, siege Ye’s town with Cai He and forced march Lu Bu to him., if you cant reach it with Cai he disband his retinue. Declare war on Huang Zu therefore voiding all deals with Liu Biao and Cai Mao with no repercussions. Siege Luoyang tradeport and before capturing the tradeport make sure you won’t fill up your intimidation past 100 therefore wasting some.

battle and upgrade buildings as you see fit, check global pool and don’t forget your bases, recall back the general at the tradeport, for reforms i go down the green tree, trying to get azure dragons as soon as possible.

Onwards
since Rng and the AI will surely change for everyone ill just post hows it going in my campaign to thoses that are interested.