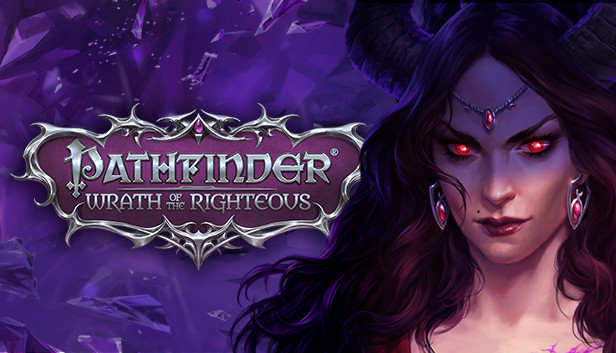 For Pathfinder: Wrath of the Righteousplayers, this guide is about the Secret Ending which includes also the Ascension Achievement, let’s check it out.

I will break this guide into acts.

I will add pictures as I do my second run through. However, if you are willing to send me pictures to place in, please leave a comment. I’ll add you to the contributors/give you credits at the end.

Five things that must be addressed.
1. Those Mythic Paths are not eligible for Ascension ending:
Legend
Swarm-That-Walks

2. Do not enable Auto-Crusade mod. It disables Command Table within Drezen, through which you complete important projects for this achievement.

3. You must enter act 6, named as Threshold location on the map, not sooner or later then Third Week of Gozran, 4717 year. It is in between 16 and 21 dates of this month.

Pathfinder months are as follows; Abadius, Calistril, Pharast, Gozran, Desnus, Sarenith, Erastus, Arodus, Rova, Lamashan, Neth, Kuthona.
The game gives you a decent amount of time to complete before locking off the ending, however there is a 6 month time skip while in act 4. Be wary of this while calculating the time you have left. I will leave this time tracking up to the player as it varies on how much you rest, how much you explore, etc.

4. For that ending, you must have at least one Fresh Nahyndrian Crystal, that you obtain from the defeated Demon Lords. You get your first crystal during Chapter 4. You can get 4-5 more crystals through defeating other Demon Lords during act 5 and 6. Those will be used to make your companions ascend with you. Only Trickster and Demon mythics can defeat Nocticula and get her crystal.

5. The last note is that while the storyteller notes are important to him, they are not required for this ending. Completing his quest simply provides you with a reward, that will help you fix Lexicon of Paradox without Knowledge Skill Checks. If you do not believe you will be able to past multiple 40+ History, Arcana, Perception skill checks; make sure you obtain all the storyteller notes. Guide to his quest is not included in this thread.

Act 1: Welcome To The Party

Step 1:
In the Prologue, after Deskari reveals himself, you are given the option to fight or use a protective spell. Choose to fight. (this occurs within the first ten or so minutes of the game)Step 2:
In the Market Square, during Act 1 where you’ve started your game, there is an interactable knife. Pick it up/keep it. You won’t miss it. You will see a blue cosmic sparklings.

Step 3:
When deciding about the wardstone, at the end of Act 1, choose any options other than the Aeon and Lawful Angel. Only pick the Aeon one if you desire to continue doing the Aeon Mythic, otherwise you will be locked out of this path. Otherwise you can cheat in another dagger via toybox and it is called “crystaldagger”. If you’re using toybox make sure to check “allow achievements”.

Step 4: (Steps 4-6 are not necessarily required given you get the required research one way or the other, but is required for a much later decision to save a group of people and killed a named character while getting a required item)
When you finish fighting a boss at Leper’s Smile, go to Nurah’s tent and pass a difficult Perception check.Step 5:
When you get ambushed by flying Gargoyles, go out your main tent and go left where the queen normally stays if you convinced her to stay. Nurah is there and pass yet another perception check.
READ:  Pathfinder: Wrath of the Righteous Basic Crusade Strategies Guide

Step 6:
After Lost Chapel confront her. Make her your Ally.

Step 7:
There is a certain named crusader you rescue in the Battle of Drezen. Free them. You can’t miss her. They will then show you a secret path and pose you a question. Respond with either the evil or neutral answer.

Step 8:
At the end of act 2, you can pick any mythic you unlocked except for Aeon. Afterwards, when the game transits to Act 3, you will be able to finish the Sword of Valor research, through a Command Table. You are in no hurry, but it is recommended to do though early in the game. There are three other projects that must be finished but are not able to be researched until Act 5.Step 9:
When you go into the Areelu’s Lab, at the end of the Dungeon you will find an artifact called Lexicon of Paradox. Keep it for yourself, do not refuse it’s power, do not give it to Suture. And DO NOT kill the Suture, too. You need him. Be kind.

Act 4: Welcome To The Land Of Wonder.

Step 11:
There is a certain named character that you met in Areelu’s lab in the slave market. Free him by fighting his slave owner. This is a rather difficult fight in my experience but is possible.
There is a second option, however according to a Discord user, it may be bugged. As it did not work for him, as the person he saved did not come up in conversation in step 13.
If you wish to avoid this, you can simply talk to the slave master in front of him and choose to buy him. Apologize, then offer money.

Step 11b: (optional)
This step is optional, and is rather difficult. Talk to Shamir in the Den of Ardent Dreams . You’ll obtain a Crystal through this that is simply the blood of demon lords. Do not give this to her, and keep it for yourself. This is simply optional, as you only need 1 crystal for the ending and you will get one by the end of act 4 if you kept your midnight bolts. Otherwise, here is your way of getting one.
Step 12:
Obtain the second part of the lexicon in Noc’s palace once you have been allowed passage in. It is the first passage on the left into a room with a projector. It is hidden behind a difficult perception check (dc 40 I believe). There’s another bolt here in case you need one. Once you have both halves, use them. Simply right click in your inv. This is followed by some *very* difficult checks, they must all be passed.

Step 13:
When talking to Areelu, reveal that you saved the person from step 11 and ask about him. When she wants to give you power, ask the questions first, do not accept the power right away. It is important you do this first.

Step 14:
When fighting the boss in the mines, who is not the first person you fight but rather the second who rips someone’s heart out, use the midnight bolt on him. When talking about the crystal to somebody after this fight, take it. Even if they threaten you. No harm will befall you. This is the second out of the six crystals you can get.

IF YOU ARE LOOKING FOR THE SECRET ENDING ON YOUR FIRST RUN, THINK ABOUT WAITING UNTIL DOING ACT 5. ITS CURRENTLY VERY JANKY FOR MANY FOLKS. IT WILL BE FIXED SO DO NOT DESPAIR

If you picked Demon or Trickster, you will fight another demonlord during your mythic quest. Use a Midnight bolt on them to collect another crystal.

Step 15:
Go to Plura’s falls, somebody you know sent a ton of demons at them which is mentioned in act 4. When prompted between killing the man there, or saving the hostages. Kill him if you did not ally with Nurah all the way back in act 2, it is required to make sure he does not escape. This gives you another researchable. Research it.

Step 15:
Make sure the cape that you got in Areelu’s lab is repaired before you go to Iz. Once there you will encounter Areelu. Bring up the cape you repaired earlier. (honestly it’s pretty baller at least for me anyways and I kept using it) Also, make sure to research the Crystal you obtained at the end of act 4 after using the midnight bolt.

Step 16:
Immediately go to the ruins to the right in Iz. It’s a passage way down. There you will encounter Anemoa, make sure she is dead once you fight here. To the left of the room is a crystal key, pick it up. In the same basement, to the right of where you came down, there is a hidden passage way behind a perception check. The unlock chest contains another “glass key” take it.

Step 17:
When fighting the big bad in Iz, you can use a midnight bolt on him if you want as well to get a crystal.. However, it must be picked up before the boss is defeated. Return to Areelu’s lab. The project where you picked up the Lexicon needs to be interacted with. 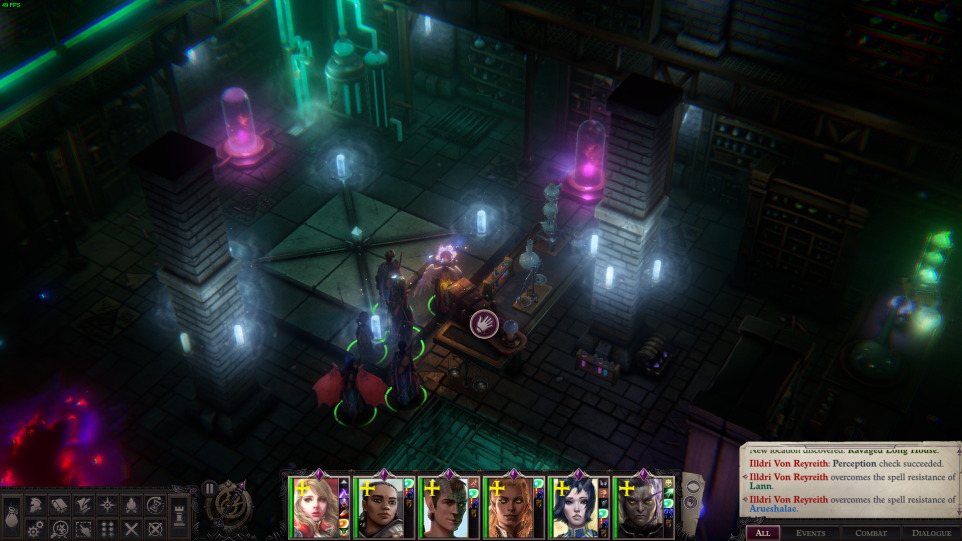 Step 18:
When you see somebody summon a Balor, explore the woods to the right of the house. There should be a window in the middle of nowhere, use the key. There’s Areelu’s notes on the second “story” right hand book shelf.. Once you get out, make sure to research Areelu’s notes. Quick save before continuing. Location of the window is below. 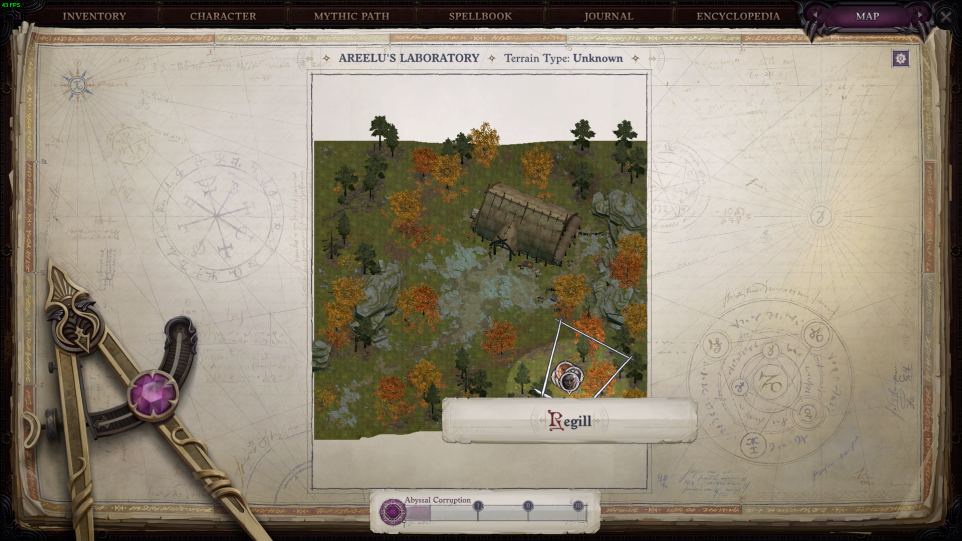 Step 19:
You encounter Areelu one more time in this area. The previous two choices with the ghosts change what you must select. The first one is always the same. Play the game of asking questions. Being Golden Dragon isn’t required. Don’t smash the projector then leave.

If you forgive Both the correct answers are;
1. Sadness or Anger
2. His guilt is indisputable, but he had already suffered enough. (if forgiven)
3. He deserved death.

If you refuse both it is
1. Sadness/Anger
2. For the sake of Justice
3. Betrayal deserves punishment

Step 20:
You must free the person teleported away by the second boss you fought at the end of act 4. Once you do so, there is a hidden passage way the leads outside of the labyrinth (yet still in the map). this is once again, hidden by a high d/c perception check. Go straight once you exit and pass two athletic checks. This will lead you to a pile of gems in the middle. This leads to a boss fight with worms, beat them.

Step 21:
When you exited the hidden passage, instead of going straight, immediately go right. There is another athletic check. Here is somebody you fought previously, exhaust all dialogue. Lich mythic information is not required.

Step 22.
When entering the Threshold, make sure the date third of Gozran, 4717. If it is not you have failed this requirement and are permanently locked out of the ending. Save editing can potentially fix this, if it is I will add it in.
At the Threshold, when the game makes you set up camp, there is a small Desna-like shrine near the entrance the building you’re about to go in. Activate it, and green lights should show up around you.

Step 23:
Clear through the dungeon as normal. When you speak to Areelu after beat the Echo of Discari, do not fight her right away. Exhaust all the dialogue, then fight her.

Step 24:
Exhaust all the dialogue relating to changing her mind about her experiment. If everything in this guide was done properly, you will have 5/7 required choices to convince her. Then choice the option to work with her.

That’s all we are sharing today in Pathfinder: Wrath of the Righteous Secret Ending (Ascension Achievement Guide), if you have anything to add, please feel free to leave a comment below, you can also read the original article here,  all the credits goes to the original author =EXO=CPL.Rin.I and Рий