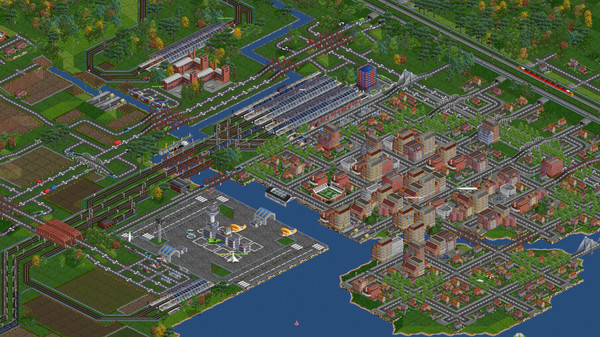 For OpenTTD players, this is a guide on how to, quite literally, wreck the competition in OpenTTD – a selection of dirty and underhanded tactics that I’ve been using since the vanilla Transport Tycoon Deluxe days to gain an unfair advantage over other transport companies.

Hello and welcome to my guide on how to, quite literally, wreck the competition in OpenTTD. Featuring a selection of dirty and underhanded tactics that I’ve been using since the vanilla Transport Tycoon Deluxe days to gain an unfair advantage over other transport companies. Over the course of OpenTTD’s development, several tactics have been patched out, but I’ll still discuss these where relevant to the other options that are available (outdated screenshots will also be displayed in greyscale).

I would strongly recommend that you do not use this level of dirty play in open multiplayer games. It could be funny in games with friends but I would suggest that it’s restricted to single player games only. Taking single player games into account, this guide has been written from the perspective of using the SimpleAI downloadable AI script, as it closely resembles the AI from Transport Tycoon Deluxe, and is therefore considered a starting point for new players. However, I don’t see any reason why this guide wouldn’t work with any of the other downloadable AI scripts.

The SimpleAI script will usually start laying railway track shortly after it establishes its first road vehicles – trains have a much higher profit margin than road vehicles, as they can transport cargo much faster, so it’s a good idea to slow down the AI if they start placing stations in and around towns and cities that you operate.

It used to be possible to connect your railway track to a competitor’s station – you couldn’t actually move your own trains on someone else’s track but any trains that tried would be subjected to an ownership check on the first pixel of the first station tile. If a rival train was in the station at the same time, the trains would collide and both trains would be destroyed (killing all passengers in the process) and that line of the station would be unusable for around six months as the cleanup operation was talking place. For the cost of a train depot, the cheapest engine, and a ratings penalty you could easily destroy a £30k+ train and all of the cargo, close down a major station for six months, and have your competitor take a large ratings penalty.

READ:  OpenTTD A Treatsie on OpenTTD Mods and DLC 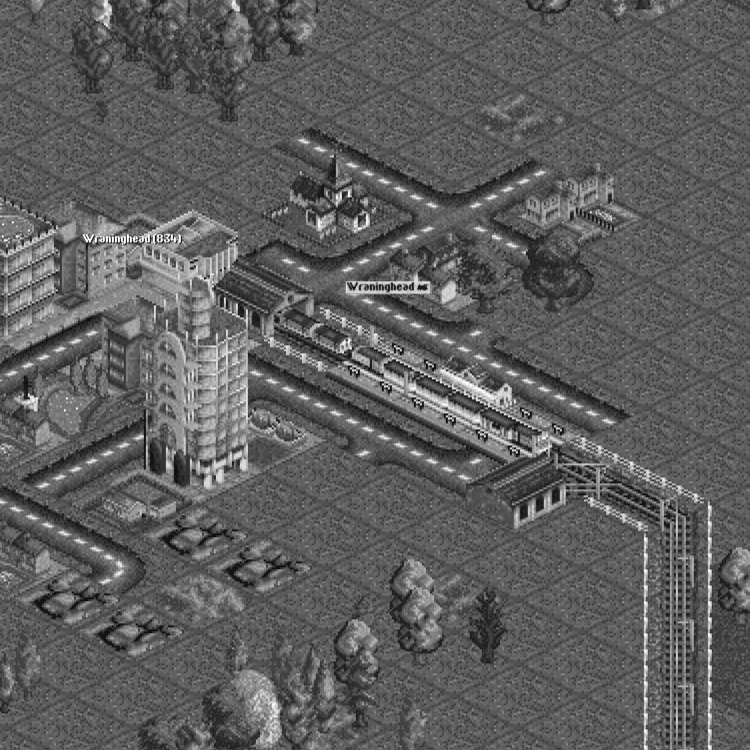 This was the most catastrophic and, probably, most well-known tactic in Transport Tycoon Deluxe so was removed very early on in the development of OpenTTD. With this removed, I am not aware of any methods to destroy rival trains; you are not able to manipulate any railway stations or track belonging to a competitor and cannot create crossings with your own track – you can create a crossing with road but all that will happen will be the destruction of your own road vehicles with no damage to rival trains. In order to ruin a competitor’s railway network, we will require a little forward planning…

The SimpleAI script has a very deliberate order of placing elements when it comes to trains; first the stations (2 lines, 4 length), then the junctions, then the track joining the first station to the junctions (in order) and to the second station. Track is placed slowly, one tile at a time, without a huge degree of planning – SimpleAI tends to meander track around obstacles rather than over or through them. Because of this methodical approach, you’ll often find stations that are disconnected from the railway network. 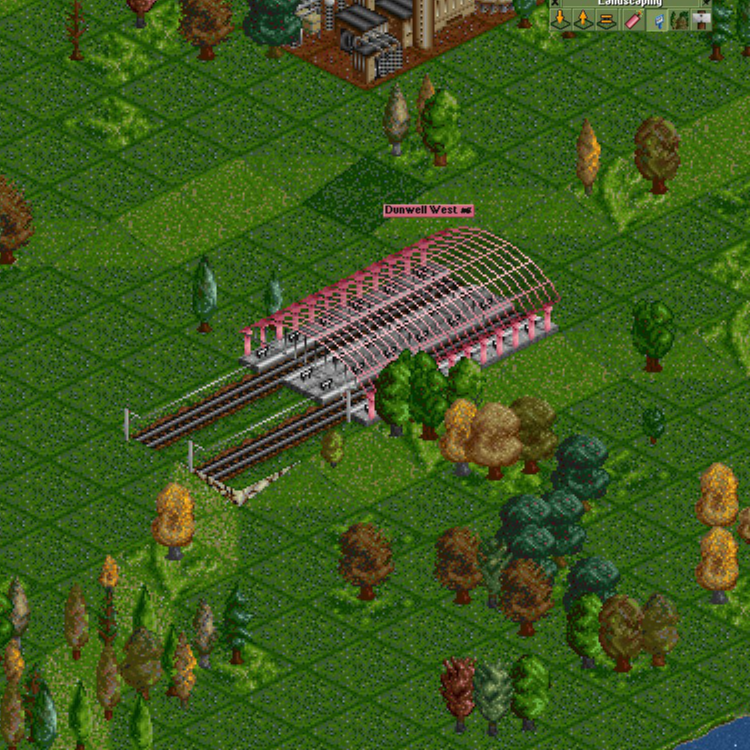 These stations are the perfect opportunity to interfere with a competitor’s operations – using the landscaping menu, it is possible to buy land for future use and buying the land around a disconnected station will prevent the transport company from being able connect it to their network. 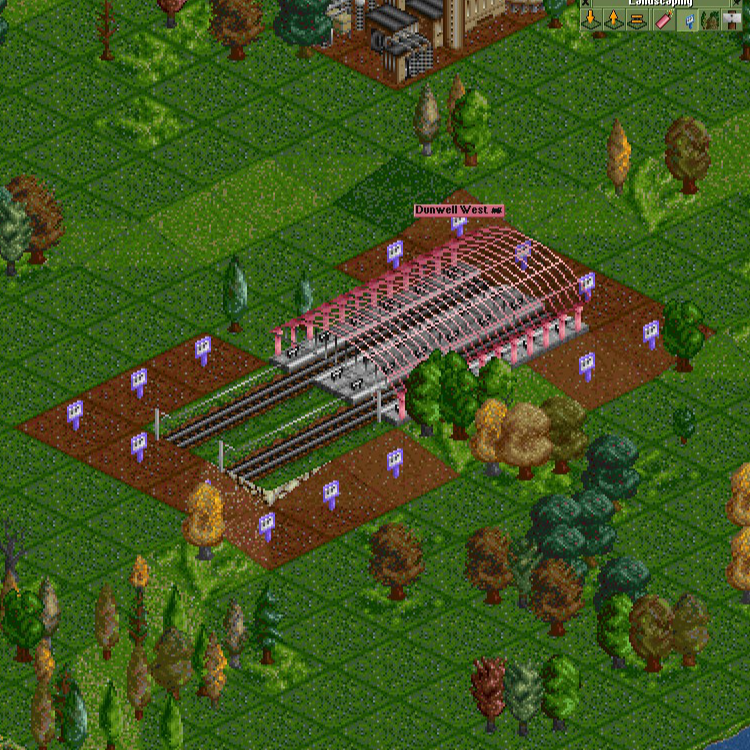 The typical response from SimpleAI is to delete the station, after a few weeks, and place a new one in a more open location. However, they’ll eventually take the hint and abandon the route altogether.

This will waste the competitor’s resources as well as having them incur ratings penalties for having an unused station.

The SimpleAI script tends to favour a large quantity of road vehicles; after all, they’re cheap, can use the existing road networks, and can get into the centre of large towns and cities more easily than trains can. SimpleAI’s reliance on road vehicles is rather convenient as they are, by far, the easiest vehicle type to cause problems for. 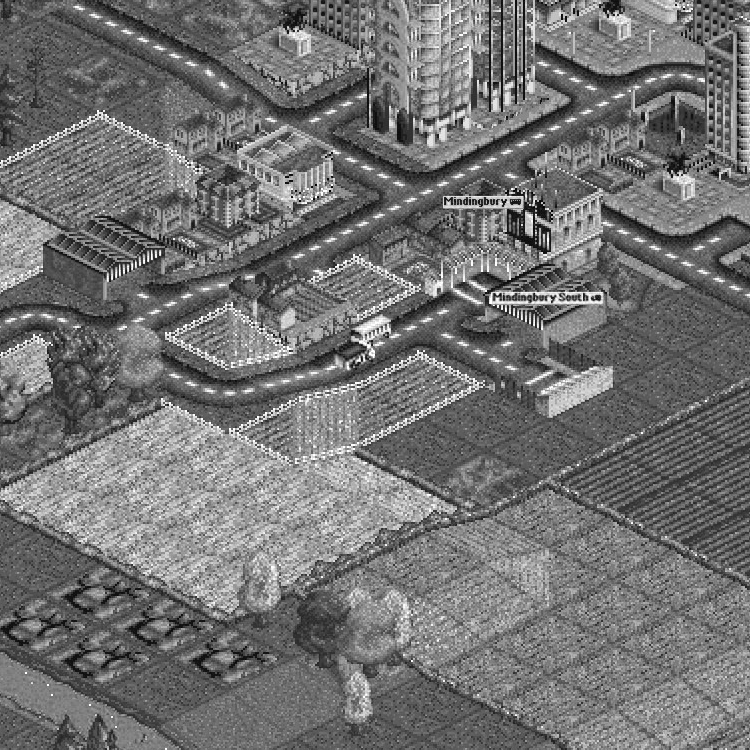 ⠀
It used to be possible to move a livestock van (being the cheapest road vehicle available) onto a road used by a competitor and simply ordering it to stop in the middle of the road – which would cause a giant traffic jam as opposing buses and trucks get stuck behind your livestock van. However, this has been patched out as road vehicles can now overtake stopped vehicles and, as such, we have to get a bit more creative…
⠀

Road vehicles might be able to overtake a parked van, but they can’t overtake a stopped train on a level crossing. 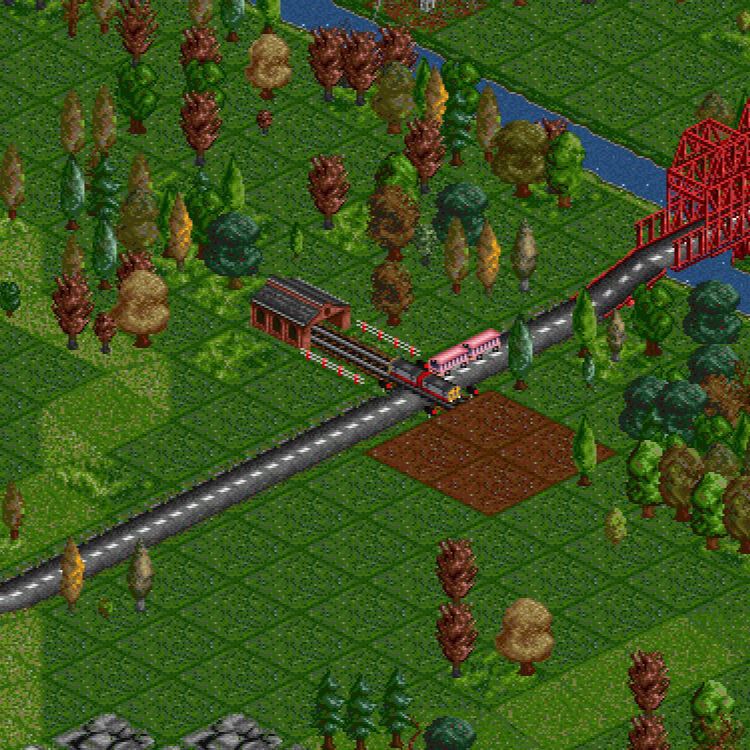 ⠀
Whilst more expensive than the outdated van tactic, parking a train achieves the same effect and still works to this day – in fact, I don’t see how this will ever be removed from the game.
⠀

More nefarious players can also use a second train to *cough* retire competing vehicles. Your train will escape completely unscathed and the opposing transport company will incur large penalties to their rating with the local authority due to having multiple accidents. 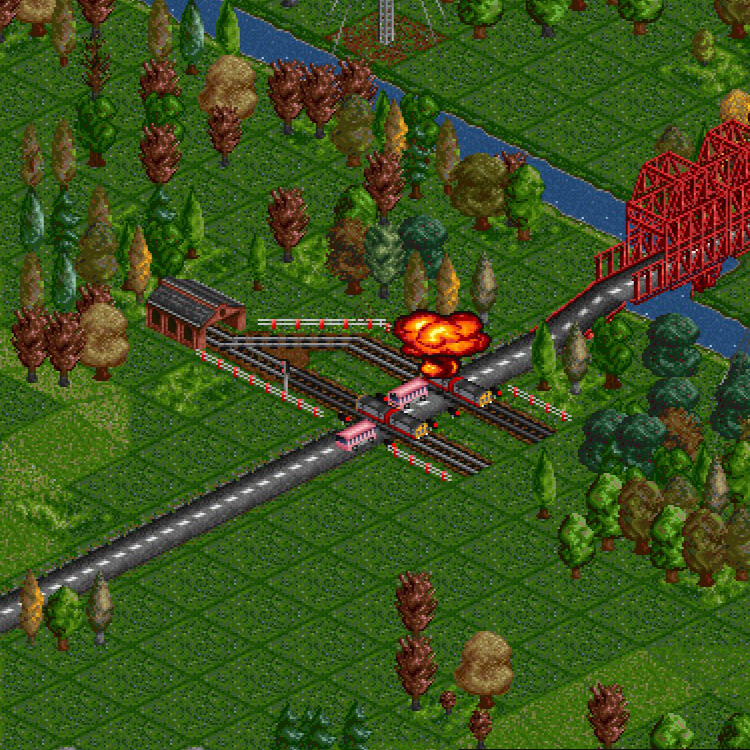 ⠀
You might also consider streamlining your pain train for maximum efficiency. Without a depot, the train will occasionally break down, but there’s a 50% chance that the train will block the road anyway.
⠀ 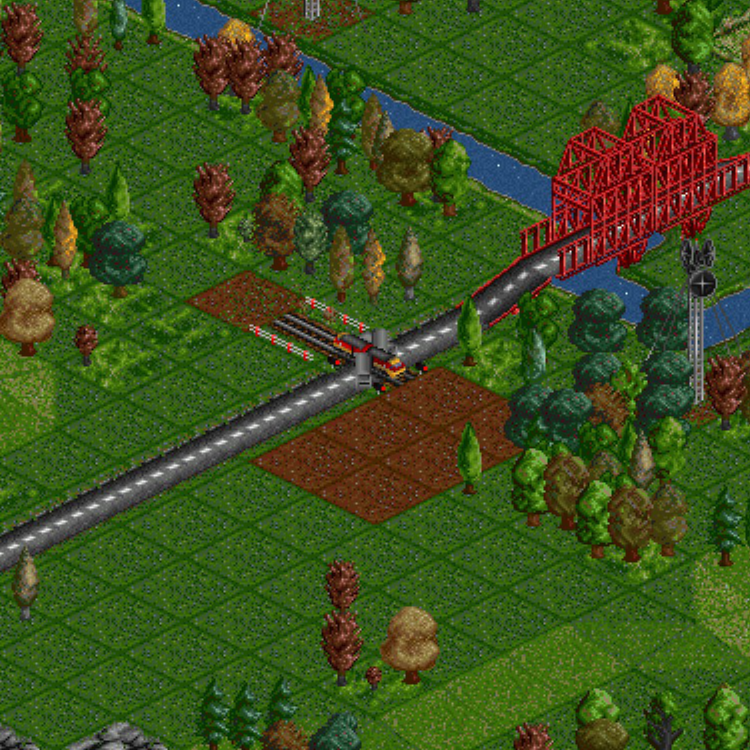 The SimpleAI script doesn’t use ships (the AI in the original game didn’t either) but I felt it necessary to include this chapter for the sake of completion. To me, ships have always felt like something of an afterthought as they aren’t well implemented and there are very limited options available. The oil tankers are incredibly slow but can move huge amounts of oil – on this basis, some players might use them to create goods at an oil refinery and move them via high speed train to a distant city for a huge profit.

For whatever reason, ships cannot have accidents – they will never collide with each other, even when they occupy the same space (I would imagine this is to do with pathfinding and a lack of defined routes) and cannot run out of fuel and wreck when all of the depots and stations are removed (like aircraft can).

Since wrecking the competition’s ships isn’t possible, the best option you have available is to obstruct them and prevent them from reaching their destination – which means that you’re going to need to do a lot of expensive landscaping. Using the raise tool in the landscaping menu, it is possible to create a landmass that completely blocks rivers and estuaries – however, this costs around £10k-£15k per tile and, as such, blocking dock access in open water or large lakes can be prohibitively expensive and could cancel out any financial advantage that you gain. The reputation penalties that you incur from the local authority due to extensive landscaping could also eclipse those incurred by your competition for not transferring cargo from stations (but you can get back in their good books by planting a lot of trees). 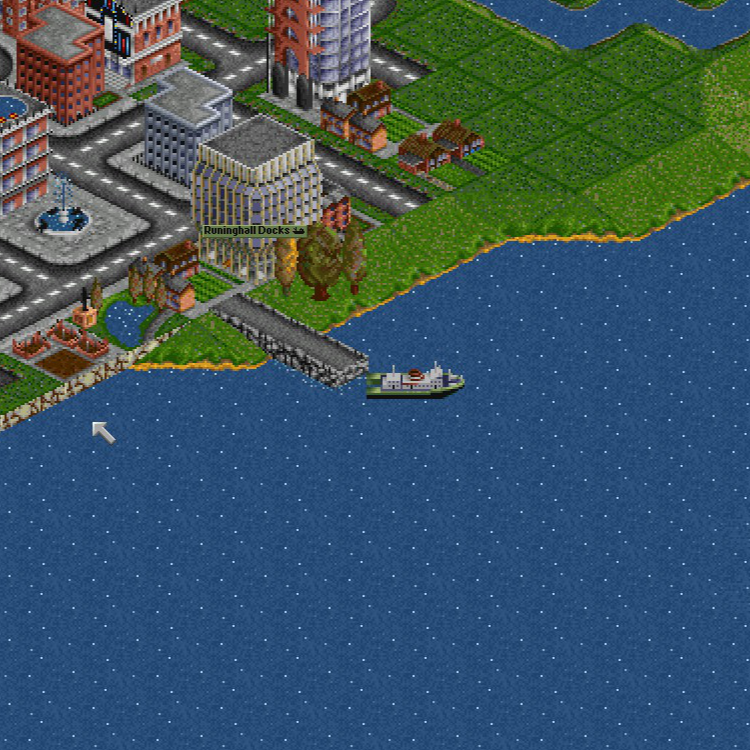 …it would be a shame if someone built a land bridge. 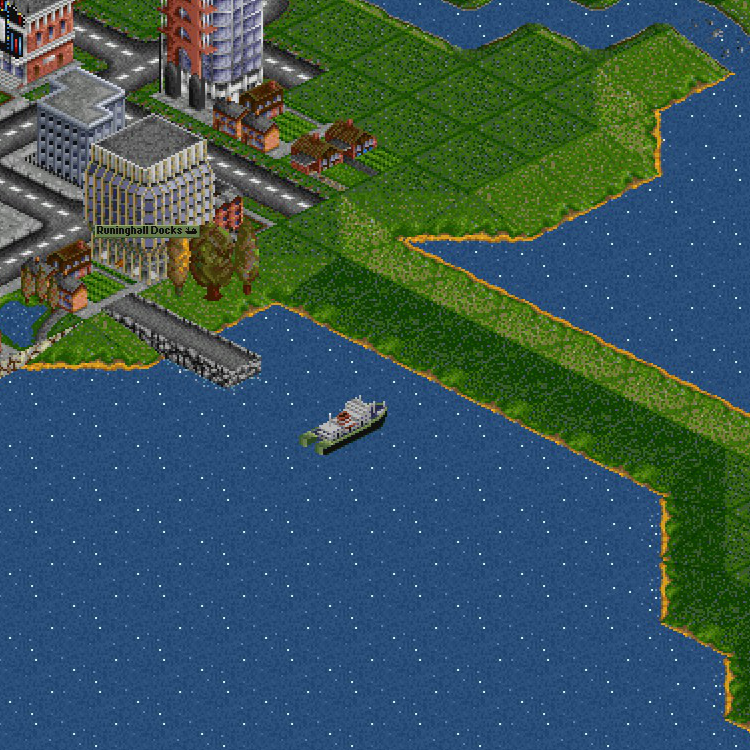 The SimpleAI script will typically start using aircraft when it has a somewhat decent road vehicle and train network. Aircraft can pull in huge amounts of profit, if used to the best of their ability, but are the most expensive to set up.

All aircraft have a 0.07% chance of crashing when attempting to land at an airport – this chance increases to 5% if you attempt to land a large plane at a small airport but this isn’t a mistake that the SimpleAI script makes. Aircraft will also run out of fuel and crash if they are airborne and all airports are removed. It would be incredibly difficult to do this to an AI player but could feasibly be achieved if cargo was fed into an airport using trains and road vehicles and you managed to cut off that supply – this, however, isn’t something that I’ve ever been able to achieve.

I don’t actually believe that this works and any crashes are purely coincidental, but I typically line competitor’s airports with large trees in the hope that one clips the canopy – I’ve seen it happen, but I’ve always chalked it up to the 0.07% chance of crashing. 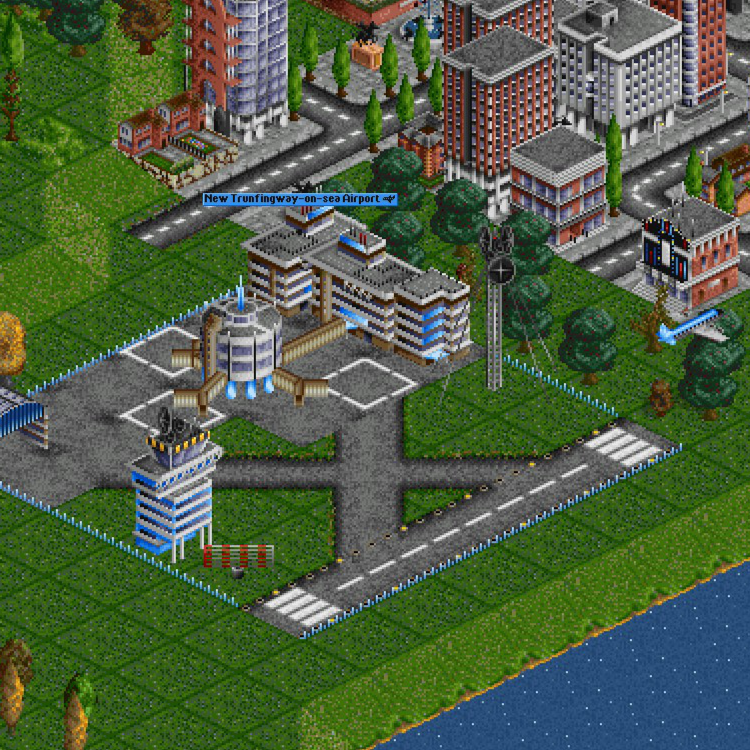 The very idea of this actually working still makes me laugh though, even if it does nothing more than improve you rating with the local authority for planting lots of trees.

That’s all we are sharing today in OpenTTD How To Wreck The Competition, if you have anything to add, please feel free to leave a comment below, and we’ll see you soon.
Credit to Super Sharpy 64′