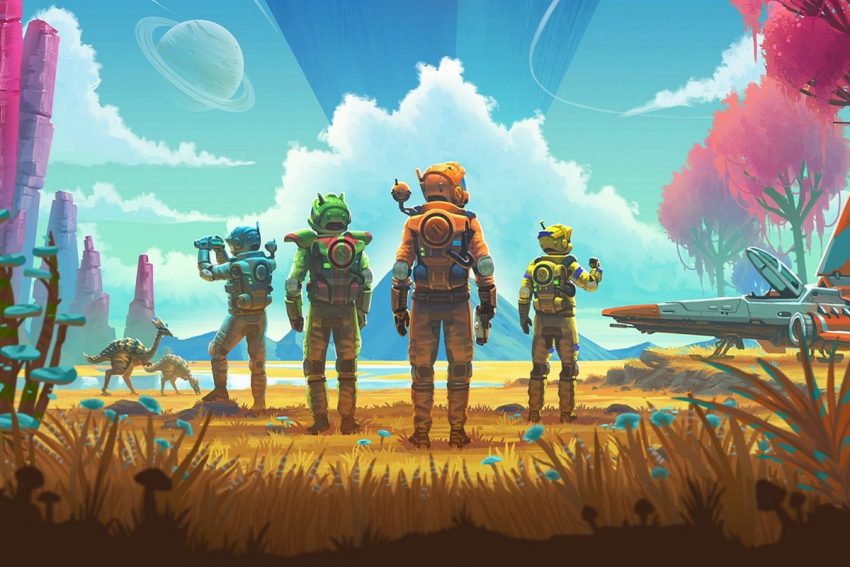 Here are some common questions on how to play in VR.

This is the initial version of the VR gameplay guide. I decided to put this here as the forum thread it was based on keeps disappearing down the list and I keep seeing the same questions come up.

initially, this is just a cut and paste of the top post. As I have time, I’ll go back through and reformat parts of it.

1. How to Swim: Use your jumpjets and point where you want to go with your right hand. Once you’re at the depth you want, move normally. (Rift-S)

2. How to use the Exocraft mining beam/cannon: On the Rift-S, there does not appear to be a controller binding to activate this. Press G on your physical keyboard and then “A” on your controller. Beam will fire wherever you are looking (Rift-S)

*note: pressing a key on the keyboard steals the focus from your controller. The headset will then track location of the controllers but, pretty much nothing else and you won’t be able to control your craft. To fix this, bring up the game menu (Y on Rift-S), right trigger somewhere on the menu to refocus your game on the controller and dismiss the menu. It should work normally at that point. As far as I can see, any keyboard key press will do this.

Power has contributed the following for the Rift CV-1. I can confirm this does NOT work on my Rift-S:

“on the Rift, not risf s, you push a direction on the left thumbstick, up or down or left or right (not on my vr right now and found it a bit by accident) to change firing modes. works for selecting the mining laser and weapons in the exos and the ship.”

3. Survey tool: once the module is installed in your multi tool, activate scan mode. Once there, use “A” on the controller to switch between scan and survey (Rift-S). An additional note: The survey tool only detects a nearby resource. You cannot “change modes” to try and detect a specific resource. If you’re not finding the resource you’re looking for, move away from it until it detects something else.

4. How to steer while using jump jets: Direction is controlled by where your right hand is pointing. (Rift-S)

5. Recharging Modules with the quick menu: on the Rift, there is no function to scroll right or left to get to the items on the quick menu. However, clicking on an item on the edge of them menu will select it, left trigger will back out to the menu and recenter it so that you can get to items that are initially not visible. (Rift-S)

6. How to reset your POV: Press both thumb sticks and hold for a moment. This is handy if you like to alternate sitting and standing and if you happen to get your view stuck in an odd spot (like sideways in a vehicle cockpit). This is for the Rift only.. don’t know about any other system.
As a side note, this will also activate a scan. Kind of silly, but no harm done.

8. How to climb a ladder: This is rather buggy at the moment. If it’s working correctly, utilize the pull gesture to use the ladder. I don’t believe this is a powered/unpowered issue as I’ve seen it glitch under either condition. Also, be forewarned, if you have a multi-segment ladder inside an underwater vertical tube, using the pull gesture will bring you up one segment of your ladder and trap you behind the ladder and the glass tube. Deleting the ladder is the only way out of this.

9. How do I chat in VR?: This probably isn’t for everyone but the keyboard does work. At least it does on the Rift. I just put the keyboard in my lap, press enter and type away. Of course, if you prefer to stand while playing, this won’t be workable. It probably also helps that I know how to type without looking at the keyboard. It does work though.

10. How do I rename things in VR?: it doesn’t appear that you can do this at this time. “Rename & Upload” doesn’t appear to do anything. No text box or way to edit current text. Additionally, there does not appear to even be an option to rename your base.

TommyFresh advised he was able to rename his base. I’m unable to duplicate but maybe others will have better luck:

The name was on the top left of the screen when you open it, click Rtrigger (or A can’t remember) on it and it should empty the text box. I then just typed on the keyboard and it was entered. Like I said it was glitchy and I had to do it a couple of times. My friend also had the same issue and managed to rename his base after trying again.”

11. How to use HOTAS: There does not appear to be HOTAS support at this time. If someone has gotten this to work, please share.

12. How to rebind keys: This is another thing that, apparently, can’t be done at this time. The rebind keys menu doesn’t work in flat or VR. If someone finds a workaround, please share.

(Dr Reed has a work-around for this, I’ve copied his method below)

13. My screen darkens around the edges when I move: This is the VR motion vignette. It’s setting is not obvious. Go to the menu and select “Control Options”. Turn off the VR Vignette and the darkening will go away.

14. How to use the analysis visor: Place your left hand near the left side of your headset and grip (on Rift). You are now in analysis mode and your multi tool will automatically deploy in your right hand. Point and “shoot” to scan flora, fauna and minerals. Also, to highlight an object in standard view (in order to navigate to it) point at it and hold the trigger. The menu tip states to press “X” to drop a custom marker but this doesn’t seem to work at this time. While in analysis mode, if you have the survey module installed, you can press “A” (Rift) to enter survey mode and search for hotspots. They surveyed will tell you what the nearest hotspot is and give you distance and some wi-fi looking, flashing bars for direction. Follow this and, when you arrive at the hot spot, it will scan it and give you details. Once that is accomplished, the hotspot will appear as a POI whenever you have your survey mode active. I haven’t tried it, but I believe you can select it and highlight like any other POI so you don’t have to travel with survey mode activated.

READ:  No Man's Sky: How to Get Rich (A Large Number of Units)

15. How to use photo mode in VR: This doesn’t appear to be functional at this time. At least I can’t find a way. If someone knows, speak up and I’ll add it here.

BiGEdge contributed this tip. Not photo mode but it does give a screenshot capability:

“Take a Steam Screenshot in VR…

*note, this is the actual menu button on the controller, not the “open main menu” button (which is “Y”on the Rift)

16. Perform a quick scan without having to use the analysis visor: Click the left thumb stick (Rift-S)

Some further additions: thanks Ryuujin

* You don’t actually need your left hand on the throttle to engage your afterburners or pulse drive if you want to rest your arm once you have set your throttle.

Touch controls can be rebound by editing the TOUCH.JSON file with Notepad++

Example: I changed the Fire button from the Right hand Trigger to the Left hand X button.