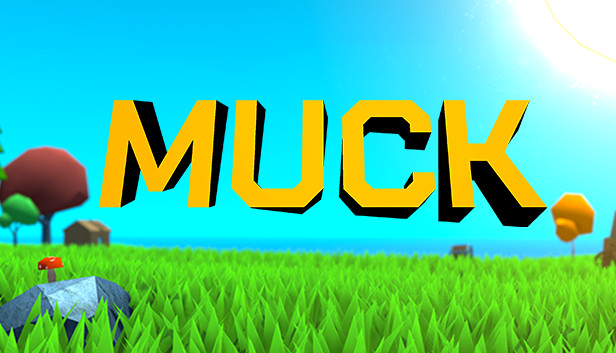 For Muck players, have you ever wanted to get a Chunky Hammer before your first naturally spawning boss? it works Surprisingly Often, let’s check it out.

Fighting bosses on Day 0 may seem like a god awful idea, and trust me, I thought so too. But, they’re actually surprisingly easy after you learn their moveset, and how to work around them. Add on to that the abundance of naturally spawning summoning statues, and you’ve got a recipe for some very VERY early Chunky Hammers/Gronk Swords.

This is literally doable with a rock, and damage-less, just going to take some time to learn how to evade the move-sets, and get used to it. Congratulations! You are now playing a souls-like. But, to ease the growing pains, there are a few things you can do before hunting down a boss statue.
1. Find the Free Chests/Structures and chop a few trees. This can easily be done while searching for a boss statue at the same time. If you don’t see any boss statues, huts, or free chests in your seed when you get in, it might be faster to just start over again, and hope for a better seed.
2. Chop some trees, get some weapons. If you don’t feel confident going in against a boss guns-a-blazin’ without any weapons, a wooden pickaxe will serve you much better than a rock, especially for Big Chunky.
3. Just do it! Chunky is by far easier than Gronk, and actually drops more gold, and more valuable stuff in my experience, so, Big Chunky is the preferred target for this strategy. Activate the boss Statue, and get focused.
4. Profit. The game becomes so easy after dropping a few bosses on day 0. You can even do some battle pillars if you want, but they tend to be less profitable, and therefore, more of a waste of precious time before those chest prices go up.

It’s probably better to just experience these on your own, as you’ll learn them pretty fast, not much to them as they have very few moves to begin with. For the purposes of telling you how to avoid these attacks, I will assume you have absolutely 0 Upgrades, are fighting with a Rock, and have full Hunger.

READ:  Muck How to Deal with Rock Giants Solo

Big Chunky:
As mentioned Earlier, this is the easier of the two bosses currently in the game, by a pretty significant margin. It only has a few things to look out for, and a little bit of baiting.
1. Trample Damage: I’ll address this one first, Big Chunky has a few hitboxes on it’s feet while it is walking around, these will damage you, and do some damage, but it is pretty minimal, so you shouldn’t worry too much about this unless you are < 20 health or so. You can avoid this by just staying away from the feet while they’re in the air, and only hitting them when they’re grounded.
2. Jump: This is by far the most common move Big Chunky will use while you are in close combat with it. It has a long wind up, telegraphed by Big Chunky bending it’s knees, it’s very obvious, and gives you plenty of time to maybe sneak in 1 more hit and then bail. It will then leap into the air and crash down, sending 3 rocks in your direction. There are quite a few things to look out for, and this is Big Chunky’s most dangerous move by far. Firstly, before it jumps, get a good distance between it and you. It has a hitbox on the way up, and more importantly, on the way down. The landing hitbox is absolutely massive around itself, and if you aren’t in the air, there’s an even larger hitbox with your name on it, though it doesn’t do that much damage. The main thing to look out for after Chunky lands, is the rocks. These will do a significant amount of damage, and will 1-shot you on Gamer Difficulty. Despite how large they look, they can actually be avoided with a well timed jump even without any upgrades. This is also how I advise you dodge them unless you’ve managed to somehow make a huge distance between the two of you. Once you are clear of the rocks, it is safe to re-engage.
3. Slam: All of Big Chunky’s moveset is highly telegraphed, so it should be easy to tell when he’s doing this instead of a jump. Chunky will raise it’s hand high in the air, and then slam it down onto the ground, sending a rock towards you when it lands. This is a pretty safe move if you know what to do. It has no hitboxes near Big Chunky, so if you close the distance, and just start hitting it’s leg, there’s not much it can do to stop you from getting free hits. The one thing to look out for is the rock that gets sent towards you after the hand slams down. But this too can be easily avoided by just switching between the two legs you are hitting when you see the hand collide with the ground. This should cause it to miss you by a very safe margin.
4. Sweep: This is the best move for you, that Big Chunky can throw out. It extends it’s arm to the side, before making a wide sweep in front of it. This move, can also be easily addressed by standing under Chunky and hitting it. There’s really nothing dangerous about this move unless you’re in front of Chunky when it’s sweeping.

As a final note for Big Chunky, it’s worth noting that I believe you may be able to bait the two melee attacks by being in front of it while it’s deciding what attack to do next. I have no hard evidence that this helps, but it certainly seems that when I’m behind or under it, 90% of the time, it will do the Jump, which is the worst move for you that it can preform.

READ:  Muck All the Powerups Guide

Gronk:
I mean, I honestly wouldn’t bother until you have a Chunky Hammer, but if you really can’t find a Chunky Statue, or just want to test your skill, here’s what I have for dealing with this bugger.
1. Melee Combo: Gronk will raise one sword above their head before slashing down multiple times in quick succession, and leave themself open after the combo is finished. This is the most common in melee combat with Gronk, and actually, the easiest to avoid if you see it coming. The key is to start running behind Gronk as soon as you see the one sword raised above their head. If you recognize it early enough, Gronk will be open for the whole combo and the pause after as you get in some free hits. If you’re late on seeing this combo, back up and to either side of gronk while sprinting and pray, then you can circle around to Gronk’s back for just 1 or 2 hits before you have to be on guard again.
2. Sword Beams: Gronk will raise both hands up and gather blue energy with a very indicative sound effect (trust me, you’ll know). Gronk will then proceed to slam both swords down and 5 beams of blue light will shoot out, originating from the swords and aimed towards you. GTFO when you hear that sound. The beams can be jumped pretty easily, but there is a nasty hitbox in front of Gronk that doesn’t care if you’re in the air or not, and if you get hit by it, it’s pretty much game over. After jumping the blue beams, Gronk will be open for a few hits before they start the next move.
3. Sword Throw: By far the worst. If you see those swords getting drawn back, bail as fast as you can, and preferably behind something. If you’re lucky enough to have an obstacle like a tree to hide behind, you’re safe, but do mind, that if you aren’t far enough away from the tree, the hitbox will extend through it and hit you before disappearing. If you aren’t so lucky, sprint circles to their right (your left) and get as much space between you as you can. And then you pray. This move is the only reason I regard Gronk as much harder than Big Chunky as I have only found a few inconsistent methods of avoiding this massive damage. If anybody knows a better way to dodge this with 0 upgrades, please let me know.

READ:  Muck Survival Book for Comsumables, Chests, Workstation, Tools and Weapons
That’s all we are sharing today in Muck The Boss Rush Strategy Guide, if you have anything to add, please feel free to leave a comment below, and we’ll see you soon.
Credit to awmac3