Here is the boss 5 – Hive Mind Core Guide, hope this guide will help you gothrough the boss.

Note: Because the mobs and the boss does not move, I won’t list where the enemies must be standing to use attacks.

Spider Web Shield – Target: Any Ally – Pick another ally, when they would take damage, you take the damage instead. Lasts 3 Turns

Predatory Behavior – Target: Any Party Member – Deals 180% Damage and has a chance to kidnap them

Set Target – Target: Any Party Member – Deals 180% Damage and Brands them for 3 Turns

Max Firing – Target: Any Row – Inflicts Instakill on all targets in a row 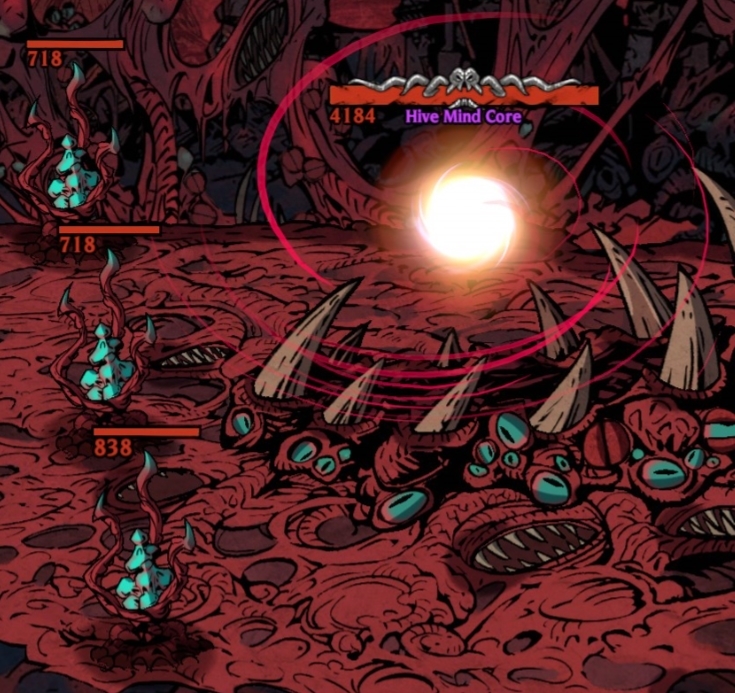 There is no back column for the boss, the Cells will always occupy the front column whereas the boss takes up the entirety of the middle column.

The Hive Mind Cell’s kidnap skill is not guaranteed to kidnap you if you are hit (in my experience). If you are kidnapped, the Hive Mind Cell becomes a Hive Mind Egg with the same HP as it had as a cell (in other words, it won’t heal if it successfully kidnaps). I only ever got kidnapped once and I freed that member on the same turn and they returned without taking damage, so I can only assume your kidnapped member takes damage every turn inside the egg.

The Hive Mind Cell’s Protection skill never targeted anyone but the boss during my fight. It may be smart enough to target Eggs so be careful. Cutting through 700-800 HP to free a party member is possible if your main damage member(s) aren’t kidnapped, but double that could be problematic.

Based on how the Replication skill is worded, the boss probably can’t use the skill if two Cells are alive, though with my recommendation this won’t matter.

The Instakill mechanic works as such for the boss. The boss will use High Energy Reaction first, granting itself the 30% ATK Buff. The next turn, the boss with use Set Target on a party member. This party member is the one who will get targeted by Max Firing, along with all allies in that row. This gives you an entire rotation to either move that target into an empty row or to move your other allies out of that row. This means this rotation takes the boss a total of 3 Turns.

Protective Mode ON gives the boss a 1.6-1.8k HP shield along with reduced damage with the GRD buff. During this turn, you don’t want to refresh buffs since Protective Mode OFF usually follows immediately after. This means this turn is usually spent on doing damage to Cells, guarding to regain MP, or healing with your Sister. Because ON/OFF are two turns of no damage, you can actually have turns where using potions won’t be a waste.

Focus on killing the Cells and keeping them dead. Protection Mode ON means there will be turns where, if your SP isn’t low, you might as well damage the cells. Also, because of how kidnapping removes party members, losing two members at once due to RNG might as well be a party wipe.

Because most of the Boss’ damage skills take multiple turns to deal heavy damage, the AoE Stun attack isn’t as dangerous as usual, assuming you can keep the cells dead. You can counter the -EVD debuff with something like Smoke Bomb from the Thief, or just take the damage and heal it up as usual. This boss’ damage output is manageable, as this is arguably the easiest insta-kill mechanic to deal with, plus if you have a Paladin stand by herself in a solo row with Provoke, you can make it so you don’t have to spend any turns re-positioning. As the Paladin will likely be your highest HP party member, using Provoke will also make it so if someone gets kidnapped, it won’t be your damage dealer most likely, and Paladin can be healed back to full much more quickly with Holy Hands and Sister.

Row Attack skills will allow you to damage the Cells and the Boss at the same time, letting you be more efficient with your damage.

The Cells don’t have INF resistances (~109 Stun RES), and since they are always in the front column, Paladin’s Shield Shock will always have a target and is much more useful than it usually is on a boss fight.

Paladin is extremely useful for this boss battle assuming you have Provoke skilled up. The Last Prayer on a Paladin in a solo row allows you to mitigate the insta-kill mechanic with just 2 skills.