Goddess of Wealth is the third boss in Mistover game. here is guide on how to beat it.

Suffocating Cloud – Targets a Cross with one of your Party Members as Center, does Damage and inflicts Bleed for 3 Turns

Unfulfilling Meal – Targets 1 Party Member, Does Damage and Heals the Boss for a portion of damage dealt. Will use this skill exclusively if HP is below a certain threshold.

Bereft Mother’s Wrath – Targets All Party Members, does Massive Damage and Bleed for 3 Turns. Will use this skill only if all three Goats are dead, and will only use this skill if they are dead. Takes priority over Unfulfilling Meal if both conditions are met. 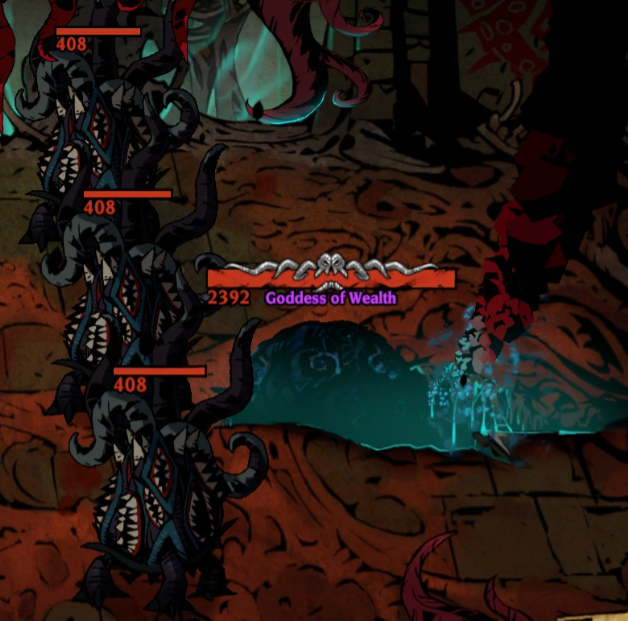 Kill 2 of the 3 Goats, do not kill the last Goat or else the boss will only use the party nuke which you cannot survive. (600+ Damage to all targets +3 Turns of Bleed)

Because the Goats have an AoE Stun attack, you want to keep the third one at low HP so it uses Cannibalise, which is a Single Target damage skill which heals the Goat. As long as its HP is low enough to trigger that attack, you won’t have to deal with moves/Stuns from the Goat. However, unlike the Great Koschei, the Goddess will NOT spawn new Goats even if you kill the first two.

Single Target Damage is much more valuable than AoE in this fight, because you don’t want to kill all the Goats. Also, when the Goddess is below a certain HP, she will only use the Unfulfilling Meal, which is relatively low damage versus her other skills. Once you reach that point the fight becomes much easier to manage.

Recommended Classes:
Brand Classes (Ronin + Werewolf to burst the first 2 Goats and Boss HP to Unfulfilling Meal)
Priest – To cure Bleeds
Onmiyouji – To deal with Stuns, if you want to try to ignore the Goats you’ll need an Onmi.