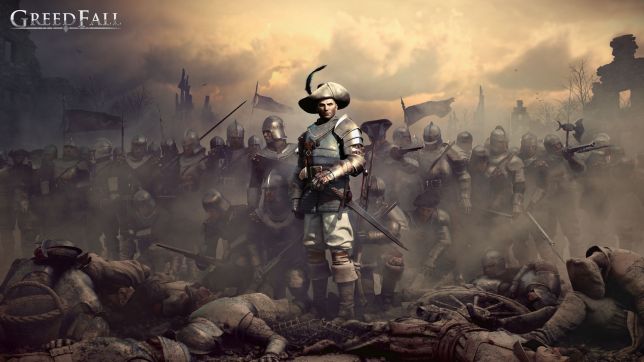 Some useful tips after a weekend exploring the world of Greedfall

Greetings, fellow island adventurers! If you’re reading this, chances are you’ve already set sail for the island of Teer Fradee! I’m pretty sure you’ve looked up Youtube Videos on the same topic, looking to the wisdom of expert role-players and what not. This is by no means an expert guide but a simple list of things that I found helpful during my weekend traversing the island. Just wanted to share this with the rest of you, who might fall under the lot of casual players who need some help getting into the game. Bear in mind that I did buy the title before its release so I do have the additional gear as bonus. So, let’s jump right into it.

Can’t decide what you’re starting class would be? That’s okay — I stared at the screen for quite sometime to figure this out as well. (Honestly it took longer for me to settle with the aesthetics rather than the skills and talents though) So anyway.

The game starts you off with the traditional trinity of archetypes in this title: Warrior, Rogue, or Magician. You’re started off with two skills from the main tree, and a single skill from the other two which you’ve not chosen. (ex. Warriors start out with Bladed Weapons, Heavy Weapons, and Fire Arms)

You are not stuck with these choices and are free to experiment with the build that might suit you best. You get a skill point every level, and find skill altars scattered in the island to improve and customize your hero as you see fit. For me I started out with Technical (Rogue) but ended up delving into the Heavy Weapons Line to mix it up with Traps, Bombs, and Firearms. This gives me a mix of crunchy crowd control melee, and a bunch of long range and control over the battle field.

I’m currently stuck with point in Blades, which could be easily remedied with a Memory Crystal when I’m finally satisfied with how my hero plays out. I could easily skip the two-handed weapons and go straight to unlocking the Bomb Fury skill or focus on one-handed weapons exclusively, so who knows. The choice is yours, have fun with it.

The selection of these part of the character sheet improves and supports the improvement of your desired archetype or hybrid class. These selections have a maximum level of five, and influence your ability to equip better gear and affect some of your characters stats. You can easily read through these when you hover on the attributes and are pretty straight forward. At level 19, I’ve already maximized Strength just so I can equip this Yellow Axe I picked up while exploring. Not quite sure how many of these attributes you can max out at end game. Again, it’s part of the discovery, and you can always rebuild when you get more Memory Crystals.

This aspect of the character-building influences how you interact with the world outside your improvements in combat effectiveness. Things like Character Dialogues, Spotting Nuances, Crafting, and accessing certain parts of the map are dependent on the level you have for each.

And here is actual Tip #1 for you: I feel that these don’t need to go past level 2 – except maybe Charisma & Intuition. (Currently don’t have points in these two.) The thing is certain equipment grant bonuses to these items. The trick is that you can have these pieces stowed away in your inventory and just put them on when you need them. Additionally having a friendly status with your party members also add a point in these. So Tip #2, do Party Side Quests as soon as they are available. Some of them progress when the main campaign progress. The game automatically informs you of these opportunities and you just have to talk to the specific party member to accept the quest. Do note, however, that only one active party member quest can be active at all times, so keep doing them as soon as they come up, as these bump up your status with them real quick.

So far I’ve unlocked Kurt and Vasco’s bonuses, which are Crafting and Intuition. With one level in Crafting and a pair of gloves, I have Crafting Level 3 already. And with a Hat and Vasco tagging along I can sneak into certain tight spaces to access parts of the map. Soon enough, I will have bonus for Vigor when Siora warms up to me. I haven’t unlocked all Party members but Petrus, my recent addition will grant a bonus to Charisma. Smooth.

This is the core mechanic of the game, and despite the simplicity of it, I have been enjoying and cursing myself at the same time. Again I play on Extreme Difficulty, and I have to be honest that it was kind of frustrating at the beginning. I got the hang of it soon enough, and the swinging a heavy weapon and popping that Dueling Pistol is so satisfying. Here are some things that helped me:

Now that we’re done with combat I think there is one final tip that I would like to encourage, and maybe it’s the most important of all — explore the game and go have fun with it! Go crazy with your build, go make your Legate the fits you! Enjoy the beautiful outdoors — both the city and wilderness. The indoor sections are god awful though. Chance upon a Guardian and get smacked a few times because outside of that you do all the smacking, and that’s with your two buddies taking a nap because you couldn’t control them and they charged into the fray with a death wish. Don’t get swayed by the mix reviews.
READ:  GreedFall: Quest, Item and Monster Guide

This one’s a gem. Straight up Pocahontas on Steroids that scratches an itch that hasn’t been scratched in quite a long time.