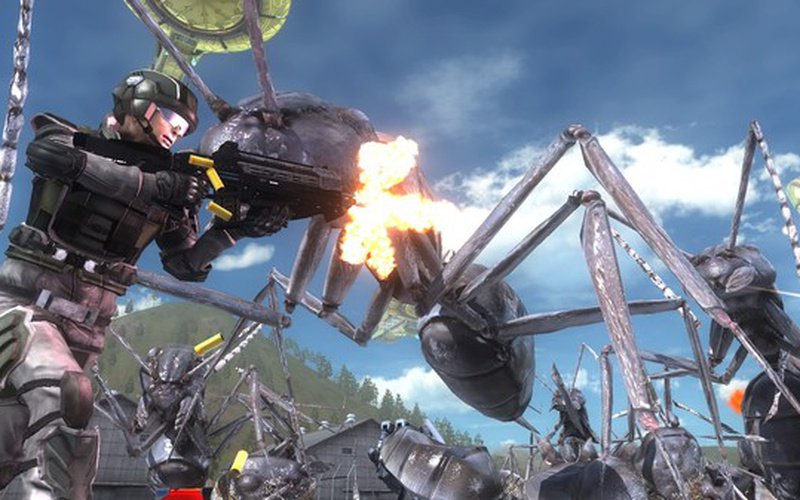 Each vehicle has different characteristics.
If you do not have vehicle knowledge, it will be difficult to use effectively.
Here we describe the abilities of the vehicles available to the player.

Equipment: Ranger(4.1 & E1 only),Air Raider(Other than 4.1)
Boarding: All classes
It is a standard tank.
The moving speed is sufficient and has a high turning speed.
The E-type is a standard howitzer that can attack multiple enemies by explosion.
Type A fires a penetrating bullet.
The SP type is a howitzer, but it has a stronger reaction than the E type and lower attack performance. Instead, the speed of the bullet is fast.

Melt Buster is a special type that fires acid.
It has practical performance if it is a proper difficulty level, but there is only one type.
The 4.1 model requires DLC and has only low levels, but fires multiple timed grenades at once.
Although the range is short, the attack performance is high, and the early stages may be useful.

Equipment: Ranger
Boarding (Driver & Gunner): All classes
It is a vehicle equipped with Railgun that excels in single-shot power.
The movement performance is low and the continuous firing power is low.
After shooting, use your own weapon until you get out of the vehicle and you can re-shoot, and you can compensate for the low firing power and turn it into a merit.
It is also effective to shoot two cars alternately.

Equipment: Air Raider
Boarding (Driver & Gunner): All classes
A large tank for up to three people.
The movement ability is very low, but it has an overwhelming destructive cannon.
Requiem Cannon may be underpowered for previous players. Instead, the bullets are faster and easier to hit moving targets.
The Machine Gun is not a turret, but is fixed at the front of the vehicle, so it can not move at all, so it can not attack up or down, and must also turn the vehicle from side to side.
Instead, the destructive power is excellent.
Gunner has different weapons depending on the model.
There are two weapons to watch out for, and you need the help of Driver to handle it effectively.
Grenade Launcher launches grenades on the side of the vehicle.
Explodes near the vehicle, so having other allies nearby can have disastrous consequences.
Missile Launcher is a missile that locks on and attacks targets in front of the vehicle.
Since the lockable targets are determined by the orientation of the vehicle, the Driver needs to turn to lock on more targets.

Equipment: Ranger
Boarding: All classes
It is a powerful vehicle equipped with the Atomic Ray Cannon.
Destructive power is high, range and bullet size are also large. Movement performance is also standard, but the movement of the turret is slow.
However, the credits for the request are very large, and it is almost impossible to request the second one.
The attack does not stop until 1000 shots are fired. However, this is also an advantage that the attack continues even if you get off the vehicle.
For example, you can have EMC attack the Teleport Anchor while you can attack other enemies with your weapon.

Equipment: Ranger
Boarding(Driver): Ranger,Air Raider
Boarding(Passenger): All classes
Need DLC
There is no attack performance. However, the moving speed is quite fast.
It is good to use for movement on a wide map.

Some are originally placed, but their moving speed is slow.

Equipment: Air Raider
Boarding(Driver): Ranger,Air Raider
Boarding(Passenger): All classes
The attack performance is lower, but the moving speed is a little faster.
The higher the level, the faster the move. It will play an active part as a vehicle for moving.
Usual type can use the howitzer. You can stop the movement of the enemy because there is an explosion, but blowing off the enemy may block the attack of allies.
The AP type is Smooth-Bore Gun, which has penetration and does not blow away enemies.
The R type is the Light Rapid-Fire Gun, which emphasizes the continuous fire power more than the Smooth-Bore Gun.
In common, weapons are poor. If you use it for an attack, you should use your weapon. Nine shots of the LV16 vehicle are the same as one shot of the LV12 Limpet Sniper D.

Equipment: Air Raider
Boarding (Driver & Passenger): All classes
It is a vehicle equipped with a treatment device.
Passenger will gradually recover while boarding.
The advantage is that you can call it as many times as you like.
Movement performance is bad at low levels. It gets faster as the level goes up.

Equipment: Air Raider
Boarding: Ranger,Air Raider
It is a vehicle equipped with a missile.
The power of one shot is weak, but you can lock on 10 targets at once.
Also, during missile launch, the attack will continue even if you get off the vehicle.
After launching the missile, you can efficiently destroy the target by getting off the vehicle and attacking until it is possible to lock on again.

Movement speed is fast, but it is easy to overturn due to the problem of center of gravity.
Even if it overturns, it is possible to return by re-boarding etc., but it should be noted that it takes a little time.

Equipment: Ranger(LV11 only)、Air Raider(All)
Boarding: Ranger,Air Raider
It is a single-seated helicopter. It has standard performance.
The Autocannon mounted on the normal type is short range, but has penetration.
The Vulture type can use a long range laser gun. You need to get used to a low firing rate, but the power is high.
Most helicopters also carry missiles, but some carry napalms. Both are high performance.

At low levels the mobility is low and unwieldy.
Another drawback is that LV38 to LV67 do not exist.

It should be noted that the number of bullets is small.
Also, at high difficulty levels, the speed of the enemy will increase, so the Auto-acquisition Autocannon will not hit unless it gets closer.

Equipment: Ranger
Boarding(Driver): Ranger,Air Raider
Boarding(Gunner): All classes
It is a helicopter equipped with a powerful cannon. The movement is slow but the behavior is straightforward.
Armor is harder than a tank and is not easily destroyed.
However, you need Gunner to use weapons, and Driver alone is not very useful.

If you use it alone, use it as a cannon instead of a helicopter.
Even in such a case, have a high power, there is a penetration force, range is long cannon is the very powerful.
It outperforms most of Ranger’s medium to long range weapons.

Heavy Flame Gun only is difficult to use and range is too short.
Only the power is high, so working together with Driver and Gunner may be effective in defeating a stationary or slow target.
But basically it is a gag.

Equipment: Air Raider
Boarding: All classes
It is a highly offensive performance vehicle. Defense performance is also excellent.
Each type has different characteristics.
Features up to 4 weapons, jumps and boosters.
Although the upper body turns are excellent, the movement performance itself is often low and it is slow to turn backwards.
Nix A/C

It is a standard type.
Many weapons are not united, and their range may fall apart. Mobility performance is standard.

It is a short range attack type equipped with the Large Grenade Launcher and Explosion.
The Large Grenade Launcher has great power, but it takes time to explode and is difficult to hit.
Explosion is a shotgun that explodes when you reach a certain distance or hit the terrain. It penetrates the enemy until the explosion.
The range is short, but it is very powerful and easy to use.

It is a high mobility type for close combat.
The hands features a Machine Gun and Combat Burner for close combat.
Machine Guns lose power depending on distance, but are very powerful at close range.
Combat Burner is a little less powerful, but penetration can effectively kill multiple enemies.
The shoulder is equipped with a penetrating mid-range shotgun.
It is effective for many enemies because it is effective and easy to hit up to a medium distance.
It can also be used for ground-to-air combat.

It has high mobility and excellent defense.
In addition, it is excellent in jumping power, and you can fly high and move forward quickly.
With the jump movement, it is also possible to immediately close to the opponent.

Overall movement is slow, including upper body turning.
Instead the attack power is high and the range is sufficient.
Armed with emphasis on attack range and power, if you hit it you will destroy all targets.
As it is difficult to handle, it is effective to consider cooperation with allies.

A model with missiles on the shoulders and Revolver Cannon on both hands.
Performance is close to the general-purpose A / C, weapons are easier to use.
The missile is slow to start guidance and travels a long distance before being guided. After the lock-on, is effective and shoot so that all of the missile to hit to a specific enemy.
Revolver Cannon is a weapon with excellent range and power. It is standard, but it has the potential to handle any situation.

Equipment: Ranger
Boarding: Ranger,Air Raider
It is a fast moving vehicle.
The powerful Light Machine Gun is mounted forward, and the attack performance is high enough. However, it is difficult to hit.
With the Small Missile version, although the attack power is reduced, it can certainly be damaged.
It is a difficult vehicle to use for attack, but there is no doubt that it is excellent if used well. Even if it is difficult to attack, it is a very good means of movement.
READ:  EARTH DEFENSE FORCE 5: How to Increase Character Limit

If you roll over, the passenger will fly but damage will only be received by the vehicle.

Equipment: Air Raider
Boarding: Ranger,Air Raider
It is a vehicle that can be used underground. It is a valuable force for Air Raider.
All FK200 Gatling Gun is loaded. By default, it will fire when you hold the L shift.
This weapon is not good at attacking upwards, but it is easy to attack downwards.
The attack power is enough and long-term continuous fire is possible.

There are various weapons on the left and right.
All weapons are powerful and can be attacked up and down, but Ammo is less.

Because it sticks to the terrain, if there is a lot of ups and downs, the view will shake and it will be difficult to aim. Also, when sticking to a wall, the viewpoint operation becomes more difficult.

There are very few credits required and you can request many.
It will be effective to prepare a lot, and to change over as the ammo of the left and right weapons run out.

Equipment: Air Raider
Boarding(Driver): Ranger,Air Raider
Boarding(Gunner): All classes
In a large vehicle, it will be boarded up to four people.
There is a lot of credit required, but defense and aggression are not appropriate. In addition, when everyone gets off the vehicle, 7 seconds of start-up motion occurs when re-boarding. For this reason, it is not suitable for single person operation.

Equipment: Air Raider
Boarding: All classes
It is a super large vehicle. There is no weapon.
You have to smash the enemy in a fighting attack using Barga’s arms and legs.
Instead, the power of fighting attacks is very high. There are various techniques.