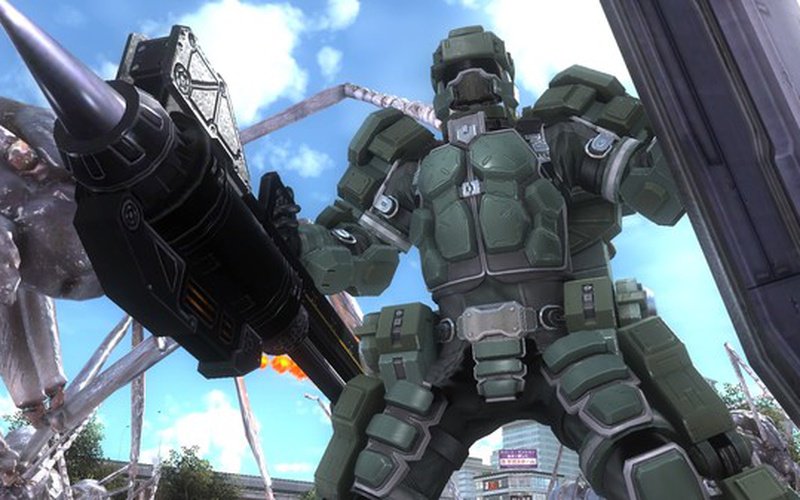 Many Air Raider weapons are unique.
Therefore you do not know the ability and you will often be confused.
This guide will give you an overview of the types and capabilities of weapons.

This category sets the target point in the same way as throwing a grenade. Therefore, fine adjustment becomes more difficult as the distance increases.
The attack lands 10 seconds after the point setting. Slow to attack the start, to use in combat will require cooperation and point prediction of ally.
It is difficult to use, but the excitement of when you hit as expected is the best.
It is all reload by credit.
Cannon Gun

Cannon Gun has different characteristics from others.
Bullets are large and can hit enemies in the air.
On the other hand, targets on the ground are somewhat less likely to hit.
In addition, damage is very large and has penetration performance.
Objects such as the Teleportation Ship will not block the attack.

In common, the size of the bullet is small and it is hard to hit targets in the air.
But the attack range of the earth’s surface is wide, there is also a possibility that a plurality of attack is to hit.
The low accuracy in the air can be said to be easy to cooperate with the Wing Diver, so it can not be said to be a disadvantage in general.

This category is one of Air Raider’s main weapons. It is easy to use because it is all auto reloading.
Autocannon

Autocannon is a devastating weapon.
It is effective against durable targets and has excellent reloading speed.
On the other hand, there are situations where it is difficult to use effectively for swarms. By asking the ground to attack, you may be able to effectively destroy the swarm.
It has penetration performance and can penetrate enemy ships etc.

105mm Rapid-fire Cannon is a weapon that combines damage and attack range.
The size of the bullet is larger than Autocannon, and the possibility of a single bullet hitting multiple targets is increasing.
On the other hand, the reloading time is a little longer and the attack is scattered, so the effect on single targets will drop.
It is more effective than Autocannon when attacking a flock, and DPS is a powerful weapon after Autocannon.
It has penetration performance and can penetrate enemy ships etc.You can also destroy the building.

120 Neutralize Cannon is the shotgun, which is fired from the sky.
Excellent balance of attack power, hit rate, reload time, magazine size, etc., easy to use.
The only drawback is the lack of penetration. You can not penetrate enemy ships, etc., and depending on the situation, you will be helpless.

The 150mm Single-barreled Cannon is also well balanced.
It is short from request to firing and high in hit rate.
Bullet size is slightly larger, you may be able to attack multiple enemies.
It has penetration performance and can penetrate enemy ships etc.You can also destroy the building.
Because of this, it is unlikely that the attack will be blocked.

This category has only two weapons.
Compared to 150mm Single-barreled Cannon, firing is slower and reloading is longer. On the other hand, bullets are larger and may involve more enemies.
It has penetration performance and can penetrate enemy ships etc.You can also destroy the building.

It is a weapon to fire rockets from the sky.
It takes time from firing to landing and often does not hit the target you want.
Also, explosions may cause the swarm to be inadvertently scattered or cause damage to allies.
The reload is fast but the damage is low and the magazine size is small.
There is also a weak point that the enemy ships etc. can block the attack, so the usability is not good.

Use this category to switch to a view that looks down from above. The attack range can be specified arbitrarily. Also, by releasing the attack button immediately, you can make a quick request instead of making adjustments.
It is all reload by credit.
Combat Bomber KM6

It is an attack by a bomber’s machine gun.
From request to attack is relatively quick, and it works for targets in the air.
The bigger the opponent, the more explosively the hit count increases and the higher the damage.
It also has penetration performance, making it difficult for the attack to be blocked.
On the other hand, I am not good at compact and highly durable targets.
The time to attack is faster as the number of aircraft is smaller, so high level weapons are not always effective.

It is characterized in that it can start attack earlier than Combat Bomber.
The credits required for reloading are also small, but the attack range is narrow and lacking in firepower and destruction power.

It is a feature that it is a little early from request to the attack start. Easy to handle, with enough power and ease of reloading.
Since the request point extends from ahead of you, even if you request it immediately, you will not self-destruct.

Drop the napalm bullets. The indicated damage is the damage when one flame hits all, not very strong.
It can not be used only to the extent to stop the ants march. The damage can be understood by burning yourself.