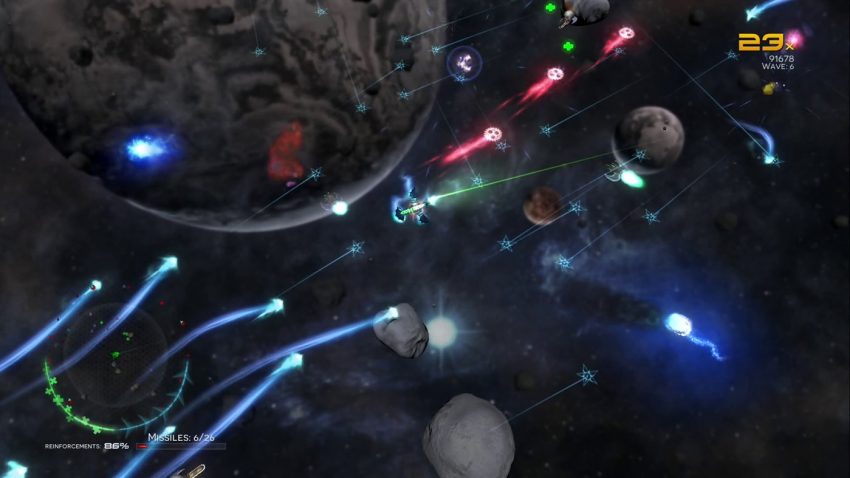 Are you quite new to bullet hell shooter games? Are you tired of dying to often? Does phobos already give you some trouble? Well then, in this guide i want to show you how you survive in Xenoraptor! From simple dodging basics up to advanced gameplay i want to share my tactics with you and your friends.

Alright, if you are new to such games you quickly realize you need to be quick, you have to pay attention everywhere to any time and you have to dodge for your life. For the most this seems impossible and they quit quickly. And yeah, i know these fast paced games aren’t really the easiest ones… Survival is way easier in a game where you have time to think. I suppose you already played minecraft once. You started a new game, you didn’t know what to do but there is one thing you always knew: At night time survival begins, at the daytime you usually have enough time for thinking, building, crafting etcetera. This however isn’t the case in Xenoraptor. You have to think fast, nearly immediately. A thing that looks hard is actually quite easy if you get used to it!

Why dodging is so important!
In the most bullet hell games you continuously receive damage, there is no way you do not take any damage the entire game long. Dodging is one major part of bullet hell games. You avoid damage and make it harder for enemies to hit you. Remember: You always have the space ability in Xenoraptor! And it’s not limited, it recharges – so you don’t have to save it up.

I don’t know how you play but i think i can predict your tactic: You only dodge then when you are nearly dying. This is way to late and you really should begin dodging at the beginning and to the end. You only play then correctly if your dodge ability always reaches 0 power. This is the key for survival! You should not wait for enemies to nearly touch you. A question: When a man attacks you with a knife, when do you start running? I think the most of you already picked immediately, and this is how it works in Xenoraptor… don’t wait for the danger to come to you, avoid the danger before you even know it’s there.

READ:  XenoRaptor: How to Beat the Deadnought

Taking cover is essential
You receive asteroids on mars. They aren’t just some stones that block your movement and endless running, but you can also use them for your advantage. They block nearly everything: Bullets, enemies, missiles, in some cases even beams. By using a dense field of asteroids you have one advantage: You only have to focus on open fields as closed fields usually kill enemies before they even come close to you. Use the environment as your advantage and not just as an annoying thing. You reduce the damage taken by a great amount by using covers – But you shouldn’t try to cover behind a barrel.

WARNING: In certain maps the asteroids have some kind of passive effect such as radioactive zone ones. They explode after certain damage. Try not to stay too close to them.

Offense is the best defense
In many maps you receive bigger enemies using flak guns, sniper guns, scattershots and more. They are a threat to you. But so far the most players i’ve seen playing xenoraptor focused on the small mobs… They are annoying but not as vicious as a flak tank. You can ‘safely’ touch a small chainsaw, touching a tesla skull however deals some deadlier damage. So why not killing THIS one instead of the small chainsaws? Focusing on big threats is important and greatly helps you surviving.

Keep an eye on the mini map
“Shoot what you see”, this is usually the thoughts of players new to such games, but often they run into a group of enemies heading towards them and possibly kill them. This happens very often as the game spawns enemies there where they would make the most sense. This means if you would always run into the same direction you will see enemies still crossing your path. A melee enemy might not be much of a threat but apparently we have many ranged attack enemies. They predict your movement and damage you. That’s why you always should keep an eye out for the mini map. It tells you where enemies are, WHICH enemies are there. If you see a few flak tanks in one direction, why flying to them?

The weapons – There is no ultimate weapon

When you have played for quite a while, you might have noticed already you get a lot of guns… energy beam, Flame thrower, flak, howitzer… you probably already got one of them. But you also might have realized not every gun is automatically better than those you got before. As example, i hear a lot that “energy beam is way better than chaingun” which is just a consideration of the player using it, but in reality the DPS of the chaingun exceeds the DPS of the energy beam and has a way lower heat… it just has a spread and travel time!
READ:  XenoRaptor: How to Beat the Deadnought

High DPS = Good?
Every weapon in Xenoraptor is unique and kind of strong. You probably use weapons like energy beam, scattergun and chaingun because they have the highest DPS, but you still can’t really survive without any low DPS sideguns. As example, you get a railgun right at the beginning. The railgun sure isn’t the “weapon of god” but heck, it serves a very good purpose! It “sucks” against tiny targets. And this is for the most already a reason to not use it. But it’s very good against big targets and bosses. Why? let me explain:

The railgun has a high impact damage. A bullet from a chaingun deals a very low damage while a railgun bullet deals above 1000. Most enemies you face have a health of 500 and below and usually aren’t much affected by the railgun. Even though the railgun has a huge damage, the most damage you deal against small targets is wasted. For small targets weapons like flak, chaingun and energy beam are way better because they cover a bigger area, have a higher fire rate and deal lower initial damage each bullet. You waste less damage against a small target with them as you would do with weapons like howitzer and railgun. However, howitzers and railguns have an excellent use of their high damage against targets with high health such as big tanks, railgunners, flak tanks and even mini bosses. You deal a high initial damage instantly, a chaingun requires a bit of time to deal this amount of damage. Big guns VS Big guys, Small guns VS small guys, remember that.

Having multiple setups is quite a good choice!
Sometimes some maps require different weapons. An open field such as earth is way better for weapons like railgun, howitzer, scattergun, hyperdisc and similar than asteroid field would be for those. (unless you use a high penetration for railgun). If you are good, you probably have reached phobos already or asteroid belt already you might have noticed already it’s way harder hitting enemies than you thought. Most enemies are sitting behind asteroids, bulldozer enemies charge at you without getting blocked, railgunners shot though everything… you aren’t able to do this. In asteroid field you are served good by using melee-based weapons such as flame thrower, disintegrator or weapons with a high penetration. Same counts for engines. Why would you use a very fast movement type in a map with tiny open space? It makes no sense. Using rocket boosters in asteroid belt is near useless while plasma thrusters are very nice for it.

READ:  XenoRaptor: How to Beat the Deadnought

This is why you have the ability to create multiple builds: It’s less annoying to change the weapons every time. What brings me to the next point!

Builds should cover multiple uses
I see quite a few videos out there with a large set of builds. I see people using 2 energy beams at once, one each of them with different ammo. This is a nice thought but less usefull than they think. Your builds should cover most uses. Long range attacks (Mortar, Railgun, Chaingun, autocannon), close range attacks (Flame thrower, Shredder, Scatter gun, energy mace) and possibly some mid-range (Infernal rune & mines) and assault attacks (missiles, magnetic bombs). You shouldn’t just focus one weapon because it seems strong, you also should try to eliminate most weakpoints of your build. Using melee-weapons only makes you quite vulnerable against warping enemies such as the warp destroyer or the singularity tank… Try to cover as much use with your build as possible.

Use your secondary
It’s not rare that i see players not using their secondary or just rarely. Yeah, the secondary somewhat is annoying to use as it is usually stronger than the enemies you are facing, they use ammo and usually you are better served with your primaries already, but using the secondary is very essential and increases the damage output greatly. Bosses die faster as example.