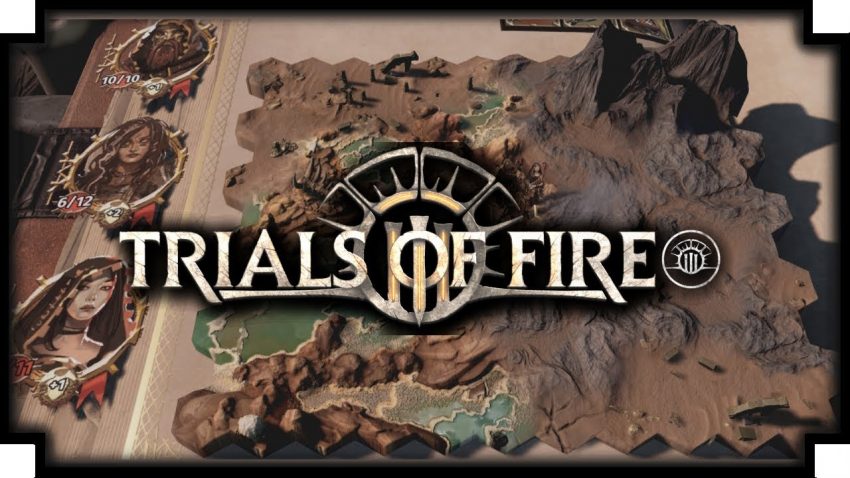 This guide aims to outline the general flow of a combat encounter and how to approach it in a competent manner. We’ll go over the different phases that tend to exist in combat as well as how to play into them appropriately. Additionally We’ll go over how some specific enemy types will circumvent these phases and how to respond to these enemies.

Before we get into what you need to know about the flow of combat it’s important that you know the types of characters available to both you and the enemy team. There are 4 major types of units that exist in the game. There will of course be some enemies, especially bosses that deviate from these standard classifications. Additionally units tend to exist on a spectrum. These 4 major types are bruisers, archers, mages, and supports.

Bruisers are your generic melee units who have strong mobility, very strong defense, and strong melee damage potential. Archers tend to have fairy poor defense, average movement and solid ranged damage potential. Mages, in terms of enemies, generally tend to be elites. They can do okay damage at long range, good damage at close range, have poor defense, and very strong disengage options in terms of mobility. As for supports there are very few enemies that can be even partially classified as supports. These enemies tend to be mages who happen to have a few support spells.

The vast majority of enemies you’ll face tend to be on a spectrum between bruisers and archers. Generally enemy bruisers will be pure bruisers that have no ranged capability. Enemy archers tend to lean more into a mix between archers and bruisers. They will generally attempt to act like pure archers but they can perform well enough in a melee brawl if they need to.

Now for playable classes the best way I can describe them is with this chart: 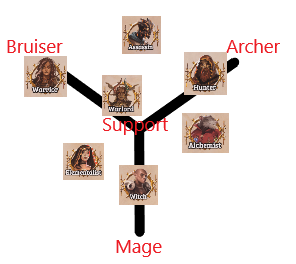 I’ll go over each classes role individually a bit here.

Alchemist: Primarily an archer however he can provide some minor support. Additionally he tends to play more like an archer mage hybrid rather than a pure archer. Due to their choose a card mechanics they can be very unpredictable and from turn to turn they can jump around the spectrum at random. Easily the most volatile class. They can random provide some support from their choose a card mechanic and some of their class cards can provide a bit of minor support.

Assassin: Pure hybrid between a bruiser and an archer. Can be played as a pure bruiser or a pure archer though they’re best played as a hybrid who utilizes both styles. Assassins tend to hang around just out of enemy reach throwing pot shots at them until they can safely rush in for a kill. They then unleash their respectable melee suite followed by a quick retreat to avoid getting punished for their pitiful defenses and then repeat the cycle. Though I have placed the assassin far away from the support center of the chart this does not mean their support cards are poor. Noth blinding flash and smoke bomb can provide exactly the kind of utility your party needs if the scenario is appropriate.

READ:  Trials of Fire Basics And Tactics For Beginners

Elementalist: A generalist class with a minor focus in aoe magic attacks and a major focus in mid range generalism. The elementalist initially seems to focus on aoe magic damage however depending on what you decide to do with her she can evolve into several roles including the aforementioned aoe mage as well as a global support using her earth spells and even a bruiser if you specialize her towards things like draining strike though her defense is not solid enough to make her a true bruiser.

Hunter: The hunter generally plays like a true archer who wants to keep a bit of distance between himself and enemies units. Some of his shots provide a little bit of utility however his primary focus is damage. He happens to be the best option for a summoner build though this is a very specific build.

Warlord: The warlords class cards are built purely towards support. Her equipment slots though push her very hard toward the bruiser role. As a result she tends to start as a pure support who slowly evolves into a hybrid support/bruiser due to her strong defensive capability combined with her easy access to heavy weapons. Generally she plays as a weak bruiser with solid support capabilities.

Warrior: The most pure bruiser. The warrior is an armored tank with very good mobility and strong melee attacks. As a trade off she has absolutely no ranged damage and very minimal support. The support she does have though is very worth while. She will pretty much always either be setting up to engage the enemy head on or taking part in a melee brawl.

Witch: The witch functions as a long range mage who transitions into a debuff based support. His early game is comparable to that of the alchemist, however as he slots in more and more of his advanced class cards he becomes better and better at supporting his allies not through direct support but rather by crippling enemies in a multitude of ways. He generally wants to spend time at mid range from enemies, just out of reach until he needs to contribute to a defensive formation. Against bosses and elites who like to bury themselves in corners where they can’t be surrounded by you’re whole party he will generally be the party member that stays out of the melee. I strongly advise against pairing him with an elementalist. Pick one or the other.

The Start of the Fight

As a general rule enemy melee attackers won’t be able to fully engage with you until their second turn. As a result this means in most encounters the entire first round will be a preparation period. Generally in the first round you will want to be taking potshots at the enemy with ranged attacks. Additionally you’ll want to be repositioning your heroes depending on their classes.
READ:  Trials of Fire Basics And Tactics For Beginners

There tend to be two options for positioning on the first round. If you’re team is dead set on kiting the enemies as long as possible to inflict maximum ranged damage you’ll want to create as much distance as possible. If you’re team is more well rounded and the enemy team is a fairly average set up with primarily melee fighters you’ll want to take the strongest defensive formation you can get early. If you’re fighting a weird boss who wants to kite your party you need to rush it down with your entire party.

The best advice I can give here is unless you’re fighting a boss who’s weak to melee combos you want to avoid a melee brawl for as long as possible. This allows you to get get a good number of ranged pot shots onto the enemies as well as enabling you to get a good number of powers online before the real fight starts. If you’re trying to get powers online and the enemy has a lot of ranged attackers the best approach is to take the best best cover you can from the ranged enemies and if it’s not enough you should block your more vulnerable classes with classes who can block the damage easily.

In general it is super important you DO NOT let one of your heroes get isolated against multiple melee attackers. Even very tanky classes like the warrior will get torn to shreds if you let them fight multiple enemies at the same time alone. Never put any of your heroes in a situation where they can get surrounded by multiple enemies with no nearby supporting heroes because the ai will immediately corner them and tear them to shreds if you give them the opportunity to do so.

On the first round you can generally sit back and set up while waiting for the enemy team to approach you. If it’s feasible take your time to set up powers and take shots with ranged attacks. Generally on normal fights you want to kite the enemy melee gang bang for as long as possible. Once You suspect a large scale melee engagement will you need to proceed to the next phase of combat which is…

How to Play the Brawl

The most important thing about large scale melees you need to understand is how combo attack work. If you don’t understand the rules behind combo attacks you are screwed from the start in both your offensive and defensive plays. Fortunately the rules are extremely simple. Units can generally only combo attack off melee attacks and they can’t ever combo attack if they’re touching more than one enemy unit. With these rules in mind let’s loom at some important configurations for all out melees.
READ:  Trials of Fire Basics And Tactics For Beginners

The most important aspect of these scenarios is ensuring that none of your heroes get surrounded. We’ll go over a few ways to achieve this goal assuming all of your heroes are in the formation.

Firstly we have the generic line formation: 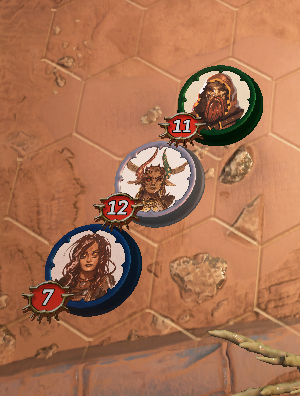 This is good strategy if either you have no terrain to work with and no other options for defending from a head on assault OR the enemy fighters have ways to get behind your formation. Generally this formation should only be used as a last resort when you’re getting overwhelmed and you need to defend the member in the middle of the lines.

Next we have the choke formation: 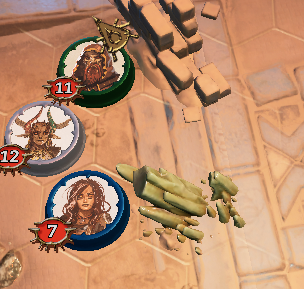 If the terrain allows for it this is a very potent formation. At first glance this seems like a good way to trick the enemy into getting killed one by one however the AI is smart enough to not fall into this trap. They will generally mirror your formation while taking ranged shots at you and attempt to send other units to flank you if their numbers are large enough. As a result this is a strong formation for postponing the inevitable brawl.

Finally we have the triangle formation: 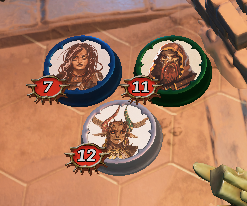 This ones kind of a last resort. If you know you’re gonna get surrounded and there’s not a whole lot you can do to prevent it without serious losses. This tends to be a temporary set up that will move back into one of the prior two formations after you know how the enemy is attempting to surround you and you can quickly take out on of the antagonists. This formation is very useful against harpies. Generally you want to do this against walls in such a way that your tankiest hero should be at the most vulnerable corner of the triangle.

This has been my basic guide to simple combat flow and formation. Please keep in mind that the techniques described here are very base line and there are a few elites and bosses that will demand other techniques and strategies. Please let this guide serve as a bare base line to build more specialized strategies off of over time. Specific enemy groups will be best combated by specific strategies.

This guide will serve you fine up to hard difficulty, however in cataclysm levels you need to start developing more complex strategies. I hope this guide can serve as a base line to develop these strategies off of.