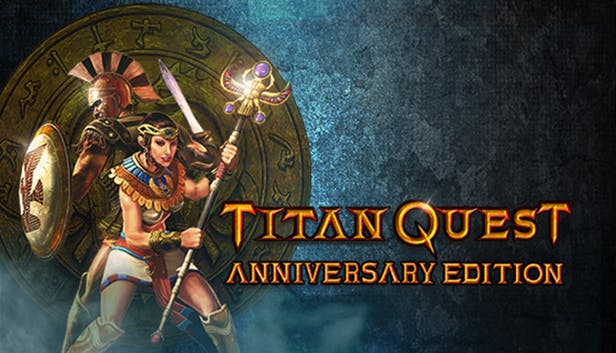 Here is a guide on how to Dual build Wield Sword Melee Single Mastery Challenge. 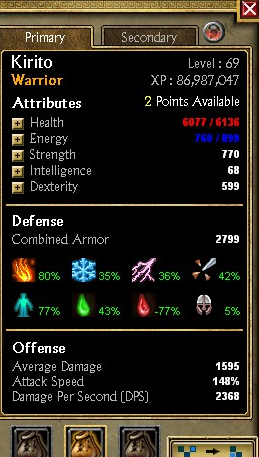 Kayaba: Much like the World of Warcraft, none of you are here by choice anymore. Unlike WOW, however, you’re being held here by me, not by your need to escape your empty f***ing lives.

Kirito finds himself trapped in another game… but this time he didn’t click the Hardcore option! Warfare mastery is an offensive melee oriented mastery themed around hitting people really hard with pure melee skills and dual wielded swords just like Kirito. And like Kirito you’re going to do what you know best – sociopathically stabbing everything without mercy.

Now you may be wondering what’s the advantage of going with a single mastery instead of two like normal. The answer is quite simple; there is no advantage. By going with a single mastery you are skipping out on the mastery points from the second mastery that grant you valuable additional health and stats. Build variety is decreased because of the lesser amount of options and you’ll eventually run out of things to invest your points in. Single mastery runs are for additional challenge and not recommended for a new player, if you are new I’d suggest reviewing a two mastery guide instead.

Atlantis is recommended for the 8 extra mastery points for more stats and the two extra 40 skills. At level 32 mastery you’ll get +64 str / dex and +1280 health, at level 40 you’ll get +80 str / dex and +1600 health for a total difference of 16 str / dex and 320 health. It’s not a huge difference honestly through if you don’t have Atlantis, however, you can expect to have a lot of unused skill points at the end.

In a single mastery run it’s less what skills to take and more what order to take them. You’ll eventually max everything possible out and won’t have anything left to invest your skill points into anymore. Some skills are priority and should be maxxed quickly, others are secondary skill which can be unlocked with a single point and then maxxed later. 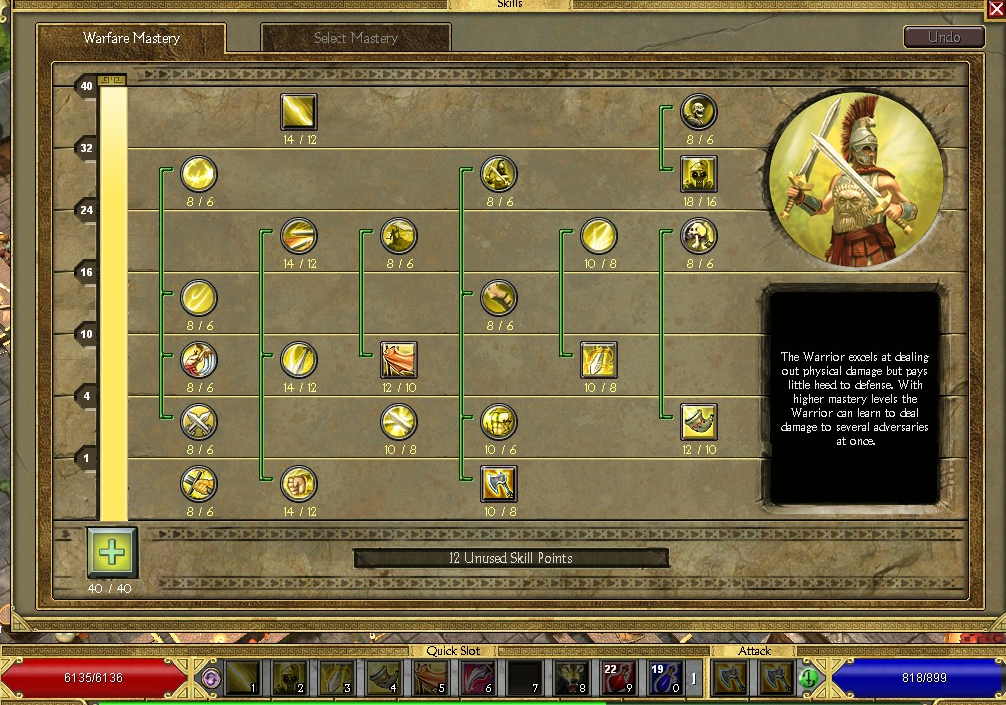 Boosts your offensive ability and attack speed. Warfare is kind of short on passives and it’s a nice one to have so make it a priority.

The Ignore Pain synergy buffs your physical and pierce resist and Ardour increases movement speed and attack speed while you have at least one stack of Onslaught active. Hamstring reduces defensive ability, armour and speed.

Consider Onslaught a priority skill for maxxing out.

Kirito: Ya know something? I really. Hate. People. They’re selfish! Ignorant! Loud, obnoxious ♥♥♥♥♥♥! With basically no redeeming qualities whatsoever! I mean really, look at all they’ve achieved! Genocide, global warming, reality TV, and just a never-ending parade of failures and ♥♥♥♥-ups! They are, without question, a complete write-off of a species, and HOW DARE YOU MAKE ME CARE ABOUT THEM!!

A point in Battle Rage is good to unlock the chance of getting a big boost to offensive ability. One of the last things you should dump your points into imo. Drop a point in each skill and boost with skill gear if you have it.

One of Warfare’s signature skills and main focus of the build. Dual wield is not an early game skill through. The skill requires heavy investment in the base skill and it’s synergy for the skill to truly shine. Before that you don’t get enough benefits from the trade off in giving up your shield.

Invest in other skills in the early going and switch points over to dual wield when you can fill up at least most of the tree.

Increases your chance to dodge melee attacks. Kind of a mid-tier skill as archers and casters are the real threat to you but any additional survivability is welcome. Not as important as priority skills but more useful to invest in than other secondary skills.

One point wonder ability. Applies a short stun to all enemies within range. Useful when you’re fighting a big group to give you time to clear some first before you get mobbed, keep ranged enemies form running away or to interrupt annoying enemies (ex: casters or big damage dealers). Further points into the skill will increase the radius and the max stun length, however, min stun length is always 1.5s so it can be inconsistent. The Doom Horn synergy skill will debuff enemies’ health and armour in addition to the base skill’s stun.

Kirito: Aw, that’s adorable, You think they’re a threat. Well, you just sit tight, the show’s about to start. Careful though, first three rows are a splash zone.

War Wind is a charge attack. It has a 360% degree arc but does terrible damage unless you drop tons of points into it. The base skill hits four targets at the beginning through and the Lacerate synergy skill will let you hit additional targets and add a bleed.

I’ve not really a huge fan of the skill but it’s your main AOE outside of dual wield procs. Should be maxxed after you get your priority skills completed.

The Triumph synergy skill should be maxxed out as well and will debuff nearby enemies’ physical damage, physical resistance and stun resistance. This will mean you’ll take even less damage from them, your attacks will do even more damage to them and your stuns (from dual wield synergy and war horn) will be resisted less.

Battle Standard has a cooldown of 60s and only lasts 36s when it’s maxxed. If you can get some recharge reduction then this will allow you to get it out more often. Also, as it’s stationary, you may need to lure enemies towards it to get full advantage. There’s a noticeable difference between it being out or not. Consider a priority.

Kirito: Fellow gamers, we have traveled far and climbed many stairs to get to this point, fighting side-by-side, noobs and l33ts alike. I’d like to take a moment to say I couldn’t have done it without the help of each and every one of you.
Tiffany: Aw, that’s a nice thing to say—
Kirito: ‘course I’m not a liar, so I’m not gonna say any of that.
Tiffany: Ohhh, ♥♥♥♥.
Kirito: I mean really, I could’ve done this whole boss fight myself. But, to be fair, I guess you did absorb a little damage for me, which was nice. You were an adequate meat shield, and no one can ever take that away from you.

Sometimes you can’t go it alone… sometimes you need an expendable pack of noobs to act as your meat shield.

Pretty effective with only a single point. Summon a trio of spectral minions to help fight for you. It has a long cooldown so will mostly be used for boss fights. The skill synergizes well with Battle Standard. Additional points will buff the minions and increase the number summoned. The synergy skill Lasting Legacy makes them despawn slower.

Something to invest in after you’ve completed your priority skills.

Fires a narrow width wave like spell that does a bit of damage and stuns. Range is decent but the narrow range makes it harder to hit targets. Makes a decent extra way to CC casters and archers through War Horn is obviously better for CC.

Drop a single point into skill to use as additional CC and invest more later.

Dexterity: Your secondary stat. You need enough to equip your gear at a min and enough so you can hit things and avoid getting crit. Try to get at least around ~450.

For reference, this is the gear I finished legendary with: 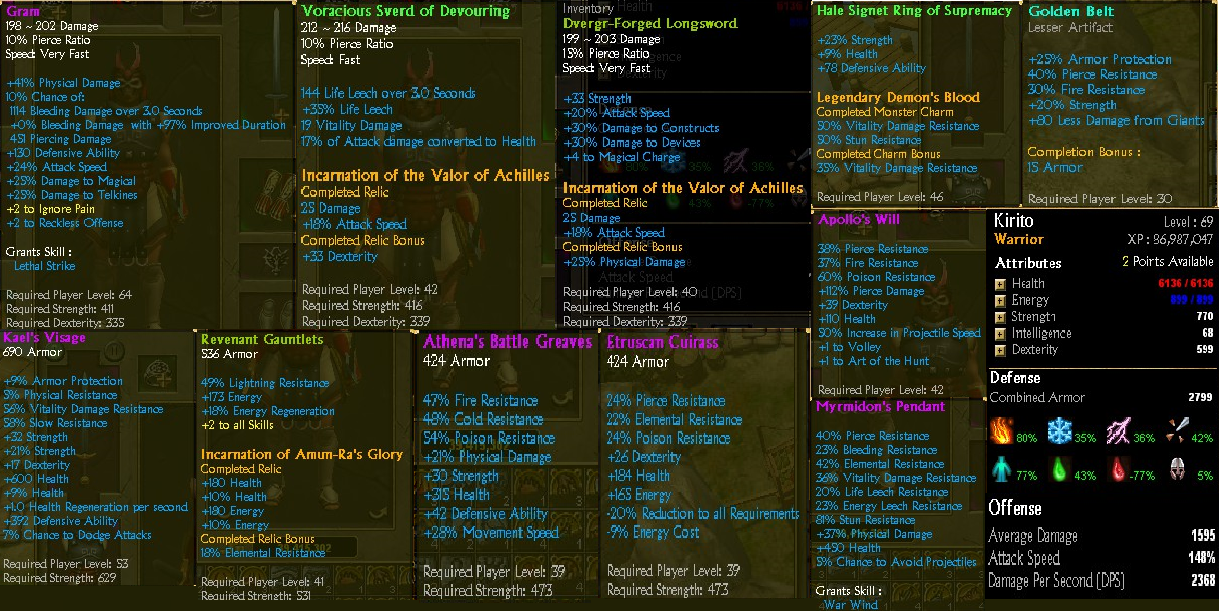 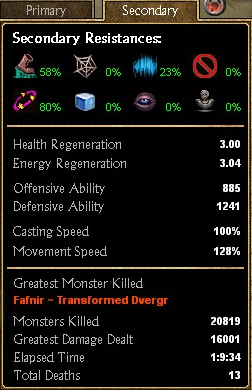 I keep a few accessories in the stash that I use on characters to min/max resistances for certain fights.

Swords used as weapons to match Kirito theme and trigger dual wield procs more often because of their superior speed.

Got a lot of boost to health, defensive ability and str / dex from gear to make up what I miss from a second mastery. Sustain from adch from sword helps with heal and did quite well against melee enemies.

Some of my resists are, uh, not so good. Pierce gets boosted at least when Onslaught is up but archers still lit me up. My bleed resistance is terrible but it’s a really niche resist, kept a piece of gear in storage for the times I would need it. The trolls were a pain to fight in act 5 legendary I can tell you (3 deaths just to them lol).

Otherwise, could have used some recharge to make Battle Standard cooldown faster as it’s so good (if only recharge was available on more non-caster gear) and skill gear to get to +4 ultimate skill.

Drop a single point into secondary skills when you unlock them. Late normal, early epic, when you have enough skill points, move them to the dual wield tree and max it out.

If you make an accomplished character (if you’re reading the guide I assume you’ve already completed the game and have twink gear) you can max Onslaught, Weapon Training and Dual Wield right away while pumping up your mastery which will speed things up. I choose to do this because early normal can be really slow and want to get into the real meat of the game faster.