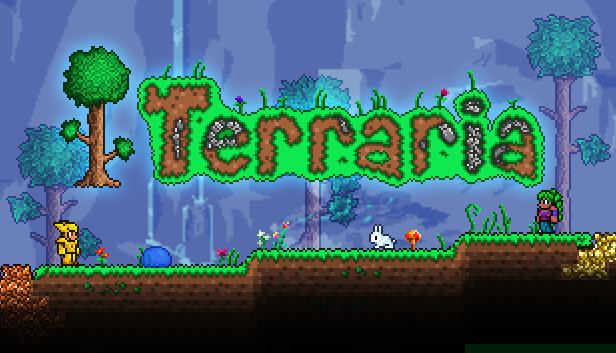 A guide to how to find all 8 new Town Slimes introduced in the Terraria 1.4.4 Labor of Love update.

Introduction
1.4.4 has a lot of new features such as weapons, blocks, and mechanics. One important new feature are town slimes, which are new types of NPCs that can be added to your villages. Town slimes function similarly to the already existing town pets, but are not able to be purchased from the Zookeeper. Instead, town slimes must be obtained through a variety of different means ranging from time consuming to very easily. There are 8 slimes in total, and all slimes can also be found in any world. They work exactly the same as normal NPCs, and can be relocated to live in any valid housing. They can not, however, be put in the same house as another town slime or town pet. 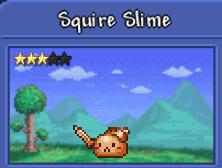 The Squire Slime is aquirred by dropping a copper helmet next to a slime, and when the slime hops onto the helmet it will transform into the Squire Slime. I’m not sure if it has to be a specific type of slime yet, but I used a blue slime.

“A hero amongst slimes, it wields the greatest arms and armor known to its kind. It doesn’t actually know how to use the, but its a start.” 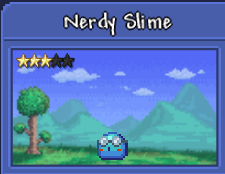 The Nerdy Slime is obtained by defeating the Slime King for the first time. The Slime King can spawn during the random daytime slime rain event, or can be summoned by combining a golden crown and slime at a demon or crimson alter.
READ:  Terraria 1.4 Optimal NPC Happiness Housing Guide

“Just a smidge cleverer than the other slimes, this slime discovered how to coexist with humans. The secret: Accessorizing!” 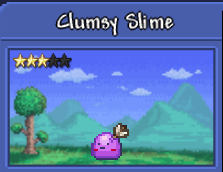 The Clumsy Slime can be obtained by hitting the balloon part of a slime that is flying using a balloon in the space layer of the world. Currently, I’m not sure if it is available pre-hardmode or not.

“This slime was a little confused when the other slimes started putting on hats and accessories. But it did its best.” 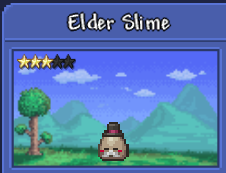 The Elder Slime is randomly found in a bouncing underground chest in the caverns layer. The chest requires a golden key to open, and I’m not sure if its available pre-hardmode. If hunting for this slime, make sure to keep a gold key on you at all times.

“Older, though not necessarily wiser, the other slimes look up to the Elder Slime. If it survived this long, it must know something!” 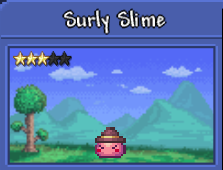 The Surly Slime can be found while fishing on a blood moon. I don’t know what stats are required to catch it or if it can be caught pre-hardmode, but I recommend using a sonar potion and a fishing potion when going after this slime.

“Irascible and insufferable, this grumpy slime is probably up to no good. Probably. It’s the thought that counts, really.” 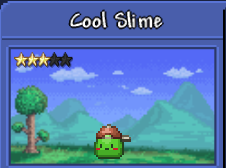 The Cool Slime can randomly come into town whenever there is a party going on. I’m not sure whether this has to be a natural party or a manually triggered one, but I got him on a natural party.

“Easily the coolest slime around, no question. You can tell from the backwards hat and indecipherable slang.” 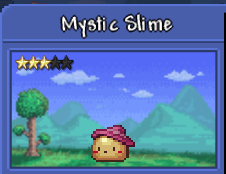 The Mystic Slime can be found by throwing purification powder onto the Mystic Frog critter that can rarely spawn in the Jungle. I don’t know if it can spawn pre-hardmode yet. The Mystic Frog will appear as a rare enemy if you have the Lifeform Analyzer, and will be immune to damage if you have the Guide to Critter Companionship equipped.
READ:  Terraria How to Fix Terraria 1.4 Not Launching (Using tModLoader)

“This slime knows that great witches wear impressive hats, but it only found a droopy one. Might explain the backfired polymorph!” 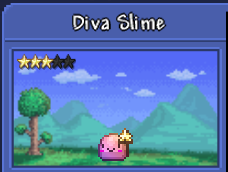 The Diva Slime can be obtained by throwing a Sparkling Water Balloon dropped by the Queen Slime into a pool of Shimmer, the new liquid added in 1.4.4 that can be obtained as an endgame item combining an Endless Water Bucket with 10 Luminite Bars, or found randomly underground in an Aether Cave.

“Born of the combined energies of Shimmer and the Queen Slime, this slime is full of boundless energy and enthusiasm!

That’s all we are sharing today in Terraria Town Slimes Guide, if you have anything to add, please feel free to leave a comment below, you can also read the original article here, all the credits go to the original author Elouda