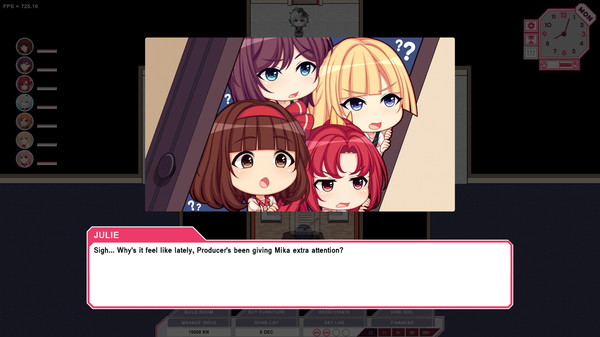 Idol Empire is a great game and an awesome way to get more of the Starnova girls, as well as some new faces! this guide is about hints and tips.

In this section I’ll give some hints and tips that I’ve discovered. Please be aware that these are just my observations and suggestions. You may find a better way to do things and that’s great. If you feel like sharing your thoughts and suggestions, leave a comment!
General Tips
Making Money

There’s several ways to make money, but the order to do things or the best times to do them might not be obvious. There’s no “best” or “easiest” way to make money, really, it’s just whatever method you prefer.

Songs and Lives are probably your best bet in the early game. Your Idols (generally) have low stats to start with and they’ll often fail jobs because of that. There’s too much risk involved in that because of high Infamy and the resulting backlash due to that (Scandals, etc.). So Songs are a safer bet by far. Plus this method doesn’t really lose its usefulness and if you do it right, Songs and Lives can carry you through the entire game without touching Jobs.

And with all that rolling, you’ve moved into the mid game…

The mid game, in my opinion, starts once you’ve got a Sales Department set up and you’re making decent KN from it. This is where Jobs can really shine as you should have trained your Idols a decent amount and thus they won’t fail Jobs as often, or at all.

And with that, we’re moving into the late game…

The late game, for me, is once I can continuously make money off the Event Room. Obviously that’s in addition to the Live/Job loop.

At this point in the game you should be easily rolling in the KN. This is also when you’ll be able to sell out the Stadium, provided your Popularity is high enough.