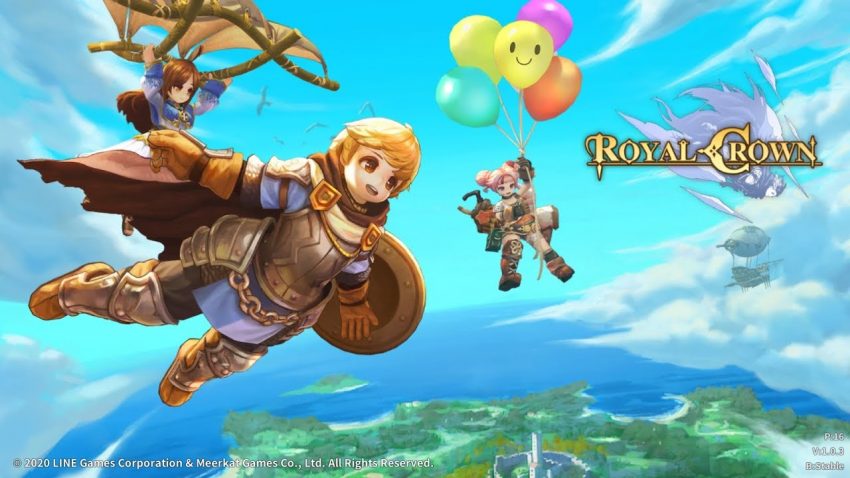 This guide also works as wiki! Press CTRL + F to open search bar! In Royal crown you need to struggle to the end to become the final survivor in this fantasy battlefield, for the beginners, it’s important to understand how this game works, and  here is a guide for beginners

Farming is a crucial part of Royal Crown, you will spend about 80% of your playtime farming and looking for mats. All of the material nodes have preset spawn location and drop 1-4 pieces of material.

While weapons and armor are found in chests around the map and from environmental mobs; runes, attribute cards, accessories, consumables, potions and food can be crafted, although you can loot them from players and find them from certain drops in small quantities as well. 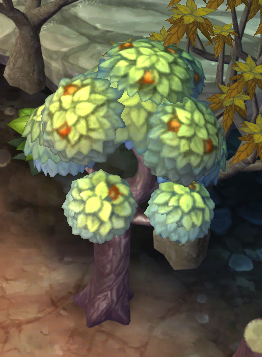 – Trees are often found in green parts of map as parts of big forests, so once you see one tree there are probably 5-10 more trees somewhere nearby. Trees drop “Tree” material and also Fruit, however amount of dropped fruit is always lower than amount of “tree” material. Once you see how they look, they are easily distinguishable from other decorative trees on map.

– Tree is an extremely important material used for crafting Accessories and strong CC / damage Consumables and it is a good idea to farm it at start of game if possible. Bonus Fruit you get from tree farming is used for making food, which is also a crucial element of the game. You would want to get at least 20 pieces of “tree” during the match, although its always good to have it. 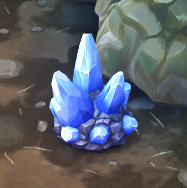 – Mana stone is easily distinguishable material whose node is located in darker places, places without any vegetation or somewhat close to water.

– Mana stones are used for crafting Runes and defensive Consumables. When farming Magic Stones you need to keep in mind that you need to have equipment pieces (armor and weapon) to put the runes into, however you can still make the runes and put them later on when you collect all the gear. Runes are very helpful, although getting all runes to final upgrade takes a lot of time, since you need 60 Mana stones for it. In the end, its not too unusual to feel restless when farming Mana stones, since you usually never have enough. 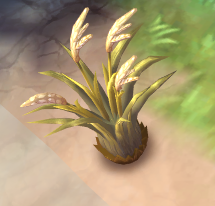 – Papyrus is always found next to water. It can be very easy to miss during first few playthroughs since it looks like hiding grass.

– It is used for crafting Attribute cards and scroll Consumables. You need 36 Papyrus to fully upgrade the cards, and Papyrus nodes are very close to each other, which results in Papyrus farming being one of fastest things to farm in game. Additionally to crafted Cards, there are Cards that can only be found in drops and they drop as fully upgraded cards and are mostly better than crafted ones.

These three materials mentioned above are crucial for gameplay and most of time will be spent farming them.

Materials below are not that crucial when it comes to stats, however they are very useful for making consumables and food

– Wheat fields are located next to villages in middle of map, they are placed outside of the village fences.

Their only use is for making food and if you land next to village its always a good idea to look out for them for few seconds. They are very fast to farm, farms have big quantities and always having food is a MUST in this game, since there is no health regeneration. 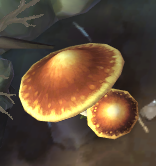 – Mushrooms are located in dark and somewhat random places, usually around Mana Stone node, although some are located in forests as well; and they usually have 1-2 more nodes nearby. 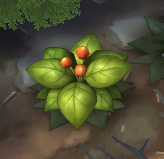 – Herbs, like mushrooms are also located in somewhat random places, but they are more often found in forests than near mana stones.

– Herbs are used for making HP and Mana potions; and a single healing consumable. They are not that crucial and i’ve often skipped them in my games, but potions can be very helpful sometimes.

– I’ve already mentioned fruit when i talked about Trees, it is a material that is also only used for crafting food, just like Wheat. Since fruits come as extra material from trees, sometimes you could get a good supply of them that lasts you for whole game, to the point where you dont need to farm Wheat at all.

– Meat drops only from meaty PvE mobs like hogs. Cactus, slime, and other mobs that arent meaty dont drop them.
– Meat is only used for crafting food. Like fruit, its meant to be an extra material gained from farming mobs and you will unlikely ever farm mobs just for meat.

Consumables in this game are split into 2 sections, first section are the consumables used during the combat – wards, teleportation, etc.. (buttons 1,2,3); and second section are healing items – potions and food (buttons 4,5,6).

– Sets a bomb that remains for 20s. The bomb triggers when hit with a basic attack, dealing 20 physical damage to all targets in the blast radius and greatly knocking them back.

– Restores 210 HP to the caster and nearby allies.

– Creates a shield that prevents 325 damage for 3s. NOTE: Game’s description has a typo, numbers for shield and length of effect are swapped.

– Dispels any debuffs on the caster as well as some negative status effects (Stun, Slow).

– Throws a spear that deals 64 (+0.8PD) physical damage. The spear decreases movement speed of hit targets by 50% for 1s.

– Summons a totem that attacks enemies from afar. Deals damage equal to 80% of casters’s attack power. Totems last for 20s. Can be destroyed

– Sets a ward that expands player’s field of vision. Lasts for 45s.

– Throws a log that deals 40 (+0.5PD) physical damage. The log decreases the movement speed of hit targets by 50% for 1s and knocks them back.

– Encases the caster within a magical barrier making them invincible but unable to perform any action for 2.5s.

– Throws a toxic bomb creating a gas field for 3s. All units hit have their movement speed decreased by 30% and recieve damage per second equal to 80% of the caster’s physical/magic attack (whichever is highest).

– Instantly makes the caster invisible for 10s. Invisibility is lost when the caster moves. 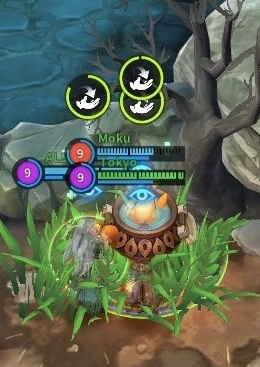 Healing consumables are pretty simple and all the food works the exact same way, there are only 2 actual different types of food. First one heals 50HP per second and replenishes full health at end.

Food is made with Wheat, Apples, Mushrooms and Meat. All of materials besides mushrooms are expendable and their only use is to make food with them. Only use Mushrooms if in really dangerous situation and you dont have any other food left, otherwise use Mushrooms to make Invisibility potions or Hypertoxic flasks.

As for the potions, they are made with herbs and their advantage is much faster healing time, at cost of lower amount of heal and hard to find material. They are used when you want to get back into fight fast instead of running away, or when you dont have any food left, although you should always try to look for more food beforehand.

– Restores 50HP every about 0.5-1s. Restores full HP after 10 seconds of eating. Eating is reset to start if you cancel it. Food disappears after around 18-20 seconds.

– Restores 90HP every about 0.5-1s. Restores full HP and full Mana after 10 seconds of eating. Eating is reset to beginning if you cancel it. Food disappears after around 18-20 seconds.

Wheat, Meat, Herbs, Fruit and Meat can also be eaten as a material to restore 30 HP per second for 15 seconds – 450 HP in total.

Just a small section to explain how to upgrade things.

Open your inventory window, and if you have enough materials to upgrade, arrow next to the item will appear. You can upgrade by right clicking, or left clicking and selecting upgrade, which will also show you how many materials are required for upgrade.

Items require 3 pieces of material for initial crafting, 4 pieces for first upgrade, and 5 pieces for second (final) upgrade. They also change color based on upgrade level from green > blue > purple.

Pretty straightforward, you have slot for one accessory and they use Wood for crafting and upgrading. 3 for crafting, 4 for first upgrade and 5 for second upgrade – 12 wood in total. They give very good stats and are cheap to make, really good items to pickup early game. They are essential items and you ALWAYS want to have them

Weapon and each piece of armor has a rune slot, making it total of 5 rune slots available if you have all the gear equipped.

Your inventory has 3 slots for attribute cards, they dont require any equipment (like runes do) to be equipped.

Attribute cards are crafted with Papyrus, it takes 3 Papyrus to craft one, 4 for first upgrade and 5 for second upgrade.

– Deals additional damage equal to 25% / 37.5% / 50% of the player’s physical attack to the target area with the next basic attack after landing 2 basic attacks. (Cooldown: 2s)

– Shoots a projectile once the caster has inflicted damage 3 times. The projectile deal area damage equal to 25% / 37.5% / 50% of either physical/magical attack (whichever is higher). (Cooldown: 4s)

On a very rare occasion, you may come across special runes that cannot be crafted, but only found in airdrops. They always spawn as purple and cannot be upgraded. I only have data about 3 of them right now.

– Decreases a successfully attacked target’s attack power by 15% and their healing and regeneration by 30% for 6s. 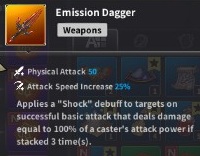 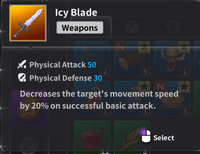 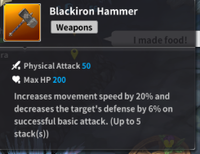 Weapons and Armor in this game also have different 3 qualities – Uncommon (green), Rare (blue) and Epic (purple), however Weapons and Armor pieces cannot be upgraded – you have to find the better ones during the match! There are also 4 unique weapons that have Legendary quality (orange), and they only drop from Dragon bosses on map.

There are also 4 Legendary weapons, you can check them out in “Legendary Items” section.

There are 7 different armor sets in this game, although there are no benefits when wearing set items together, set items share similar stats.

Items that aren’t part of a set:

That’s all for the Royal Crown Item Wiki Database Guide For beginners,and we will update as soon as new content coming out, leave a comment if you like, see you in the comment section soon.