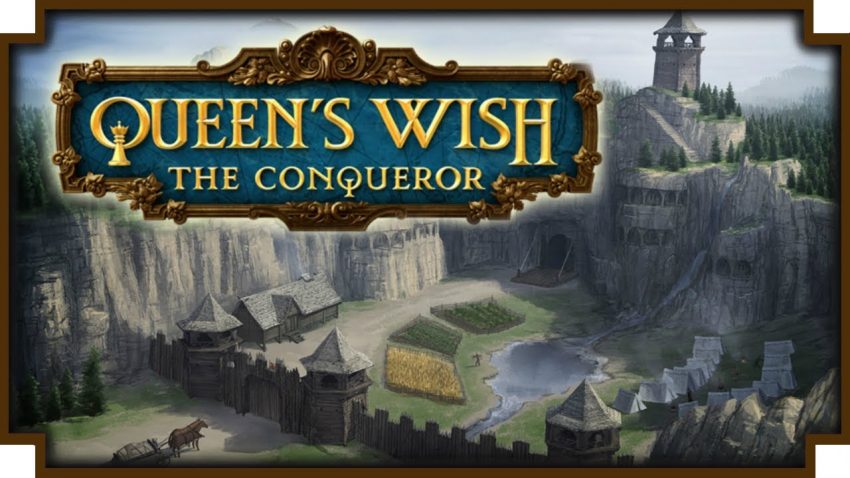 A complete list of achievements in Queen’s Wish: The Conqueror as well as some advice on how to get the more difficult ones.

Queen’s Wish: The Conqueror has 30 achievements, but every single one of them is listed as hidden. This guide aims to explain how to get each one. There will be a few spoilers, but anything major has been marked in spoiler tags.

All of these achievements are acquired automatically over the course of beating the game.
Very Funny

Survive Sutter’s prank at the very start of the game. Yes, it is actually possible to die in this fight.

Clear Grandport of bandits at the start of the game.

Complete the Mirefangs dungeon and exit on the other side.

Clear out the Vol Gates dungeon and exit on the other side.

Clear out the Ahriel Thicket dungeon and exit on the other side.

After getting all 3 vassals, the Calamity will start again. Talk to any of the leaders you have sided with (other than the Owen), and they will either give you a key, or direct you to a sage who can. Use the key to enter any of the 3 Nisse Refuges. Get to the other side of the Nisse Refuge and you will enter the Underworld

All of these achievements require making a decision, and are mutually exclusive with another achievement. You can still get both in the same save file by reloading to an earlier save, however.
Promising Upstarts/Picking the Easy Job

To get Promising Upstarts, side with the Brokk Clan in the Ukat. After clearing the Gannelspan, speak with Brackdon Cawr and complete his quests.

To get Picking the Easy Job, side with the Borgen Clan in the Ukat. Speak with King Borgen in the Home Warrens and he’ll give you a list of tasks to complete. You only need to complete 2 out of 4 of them for the Borgen Clan to accept being vassals.

To get The Established Order, side with the Mascha in the Vol lands. You can side with them even if you’ve favored the Owen in previous dialogue options, you just need to agree to help them in Thabhlen.

To get Sentimentality, side with the Owen in the Vol lands. You can side with them even if you’ve favored the Mascha in previous dialogue options, although if you’ve strongly favored the Owen, you can skip a required quest. Once their council in Madraka agrees to speak with you, complete their task and they’ll agree to be your vassal.

A Vote for Sanity/Getting the Job Done Fast

To get A Vote for Sanity, side with Istara in Sliven, and complete her somewhat lengthy quest chain. This will involve a difficult battle in the end.

To get Getting the Job Done Fast, side with the Watchers in High Elhovo. They will say you need to make them favored, but it’s actually just a bluff. This option doesn’t require any boss fights.

Base Principles/None Can Escape Justice

Keep visiting Miranda throughout the game, eventually she will ask you to judge Maximilian. You get one achievement for declaring him innocent, and the other for declaring him guilty. As far as I’m aware, this has no further affects on the game, so pick whatever you want.

These achievements all involve the fort management system.
Master of Empire

Rebuilt all of Haven’s Forts. This one is pretty simple, and should probably be completed anyway as you complete the game. Nothing special needs to be done for any of the forts, just find them and tell the builders outside to get to the work. The locations for reach fort shows up on your world map.

Build 30 buildings total. Again, this should be pretty simple and completed over the course of the game.

Place 20 decorative items across your forts. Most of these are pretty cheap, so this should be a simple achievement overall.

These achievements all involve beating the game.
The Colony Survives

You get this achievement for ensuring Haven’s survival on the colony. Specifically, you can either make a deal with the Nisse in the Tower of the Nisee or defeat them entirely. If you’re going for all achievements, you should do the latter

Utterly defeat your enemies and beat the game. Specifically don’t make any deals with the Nisse. Kill all of them in the Tower of the Nisse

Utterly defeat your enemies (as above) within 100 days (normal difficulty or higher). You can’t lower the difficulty to casual at any point in the game.

The time limit is actually fairly generous. Try to do as much in each region as you can before doubling back to another. Save you game before going to any dungeon: if it turns out to be too difficult, reload your save and try going somewhere else. Stop at forts to heal as much as possible instead of healing at inns; healing at forts is instant, while inns take up 8 hours.

A silly strategy you can employ is letting outdoor encounters kill your party to instantly travel back to Haven. This will usually save a few hours of travel time when you want to go from one area to another.

Utterly defeat your enemies without ever lowering the difficulty below Veteran.

Utterly defeat your enemies without ever lowering the difficulty below Torment. This one really requires planning out your encounters and equipment for each battle. Make sure to take advantage of speed bonuses and make liberal use of the quicksave feature.

All other achievements that don’t fit into the categories above.
Whoops

This one is easy. All you have to do is have your entire party die.

Read 15 different books. There are plenty of book in this game, especially in the forts. If you interact with each one you come across, you should easily get this achievement.

Enter all 3 Refuges. The refuges are represented by cave icons on the world map, and there is one in each major region. After entering the 3rd one you’ll get this achievement. Most of them have a mid-level fight blocking the way, so you may want to hit a decent level before trying to go to the Refuges.

Voyager of the Night

Dream 7 different times in the Nisse refuges. Dreaming costs 30 gold, and the only restriction is that you can’t dream in the same refuge twice. There’s nothing stopping you from sleeping in a refuge, taking the teleporter to another, then sleeping there back and forth 7 times.

You can no longer dream at the refuges after getting all 3 vassals, so do this before the end-game.

As Long as I Don’t Learn the Details

Buy a share of Cappia-Mascha’s operation in Vitasa.  Note that if you make the Owen your vassals, Cappia-Mascha will be murdered which obviously makes this achievement impossible to obtain after.

Complete 7 different coin puzzles. Many of these are not available until late game. Below are the solutions, using cardinal directions, if you’re having difficulty:

For the second puzzles, I only provided the solution necessary to exit the Refuge. You don’t need to open all of the doors for the puzzle to count as completed. The last 3 puzzles listed are all located In the Nisse underworld.

Here is a list of all the trophies. There are 7 total, but you can miss out on Ghorsh’s trophy if you allow him to escape.