This guide will rank the quality of different troops in Bannerlord based on their stats and equipment.

Currently, this guide only covers top tier infantry with shields. Eventually, it will cover all major categories such as cavalry, ranged, and two handed infantry.

What you need to know

Each troop type in Bannerlord has different variants (usually 3), these variants can either vary by a lot or a little, so the values such as armour are the average of all the variants. Most variants tend to have the same or similar weapons and armour. 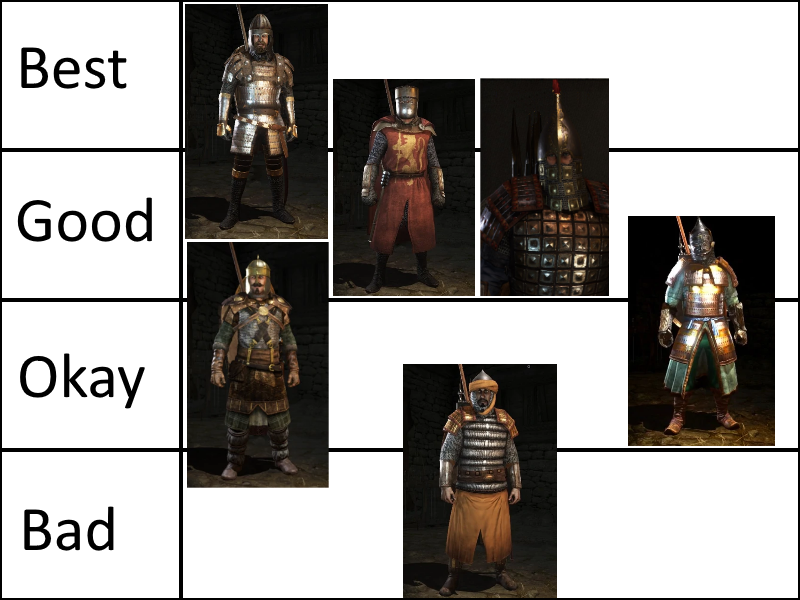 The most heavily armoured of any troop in this category. It comes equipped with a sword or a mace, along with a spear, and obviously a shield, however lacks ranged weaponry. It’s spear is quite short (114 units), but quite quick (90 speed) compared to other infantry’s spears. 2/3 of the variants spawn with a quite impressive shield with 480 hitpoints, however the other 1/3 spawn with terrible shield – only 167 hitpoints. Before they were nerfed in 1.0.10 (used to have 204 total armour), they were the undisputed best infantry, now however, both the Vlandian Sergeant and Sturgian Veteran Warrior could debatably take that spot.

Another well armoured infantry. The Vlandian Sergeant has a similar shield to the Legionary – 480 hit points – except all the variants spawn with it. It also can spawn with a sword or a mace, both of which are quite similar stat wise to the Legionary’s, except the mace is quite slower(101 vs 92). Despite having a shield, the Vlandian Sergeant can also spawn with a two handed Bill, which deals enormous amounts of damage(124), and is also reasonably long (132). All variants spawn with a spear. This spear deals less damage (32 vs 37) compared to the Pila, is slower (78 vs 90), but much longer (235 vs 114). Equipment wise, the Vlandian Sergeant is better, but has worse armour overall. Also it has a 1/3 chance of spawning without a one handed weapon (Bill), which makes its excellent shield pointless.

Unlike the Sturgian, the Khuzait Darkhan has both throwing weapons and a spear, making it more effective at dealing with cavalry. Compared to other spears, the Darkhan’s spear trades length (179) for better damage (37) and speed (84), making it an effective middle ground between the Sergeant’s and Legionary’s spears. It’s shield on average is worse than every other troop covered so far (300hp). It’s sword is better than the Legionary’s, but worse than the Sergeant’s. Despite its worse armour, it is the second heaviest troop in this category (35), only lighter than the Aserai. Overall, the Darkhan is okay, maybe even good, but its slightly low armour, bad shield, and slightly higher weight drag it down.

For being top tier infantry, the Battania Trained Spearman has quite low armour. It’s head armour is very good, body armour, okay, but its arm and leg armour is quite low. It makes up for this by having all of its variants have very good shields (480hp). It has one of the best swords also. It’s long (117), swings quickly (84), with high damage (75). It also has an axe, which is almost the same as the Sturgian’s, except less damaging (73), but longer (68). Overall, I think it is slightly worse than the Darkhan, as despite having a better shield and better weaponry, it lacks throwing weapons, and has less armour.

In most aspects, the Aserai Veteran Infantry is actually fairly good. It has the highest damage (78) one handed melee weapon of any other troop in this category, albeit the slowest (79). It comes equipped with the same spear as the Darkhan, and even has throwing weapons (5). However, what really holds it back is its awful, awful head armour (18). It doesn’t matter how well armoured everywhere else is considering it probably could be one shot to the head. Considering all its variants also have a crappy shield (280hp), it probably has the least survivability of any troop in this category. Furthermore, it is slightly heavier (36) than the Darkhan, making it possibly the slowest troop.

The Legionary and Sergeant are closely matched, and either probably could be argued to be the best. The Sturgian is a close second/third, but it has no real ability to deal with cavalry, making it somewhat situational. Although the Darkhan can deal with cavalry, it is slightly worse in every other regard than the Sturgian. The Battanian has poor armour, but good weapons and a good shield to make up for it. Finally, the Aserai would be okay or even good if it wasn’t for its terrible head armour, and poor shield holding it back. Granted, I’m not entirely sure how much shield durability matters, as I don’t often see shields break in Bannerlord.

READ:  Mount & Blade II: Bannerlord - Smithing Guide
This guide is still a work in progress, next I will add a cavalry comparison. actually i’ve noticed there are some shielded infantry i left out, i am going to add them first.
For anyone who is more curious about how the stats directly compare, you can view my spreadsheet I made here: https://docs.google.com/spreadsheets/d/12YSTM4Ap1E0ZyE9VWUcBPerdibPYOyfPnoJehtQXdMI/edit?usp=sharing
By Mmm Crits