For Loop Hero players, this guide will provide a few tips to optimize each expedition in terms of resources and space in the early game, let’s check it out.

The guide is not complete yet. It’s the first time I do this but I think these strategies can help players a lot. I’m adding content as I advance in the game, so comments that help me to build the guide are very useful.

Aspects of the initial card combinations.

This guide is mainly for people who more or less know how to play the game, I simply want to expose some stratagems to optimize the expeditions. The best way to learn how to play is to play and discover on your own 🙂

That said, let’s see what happens when we combine cards, in case one of these has been overlooked.

The first combination we will consider is the Mountain Top. If we place a 3×3 of Rocks/Mountains they will transform into a Mountain Top. This new structure gives us 120 HP and 5 for each adjacent Rock/Mountain, but in return it generates harpies every 3 days.

Another important combination is that of empty Treasuries. To empty a Treasury we must surround it completely with cards, no matter what type they are. Every time we put a card around it gives us a random resource, and once it is completely surrounded it gives us a resource bonus and empties. Keep in mind that once it is empty it generates gargoyles every 3 days. 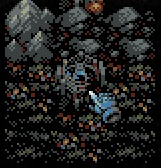 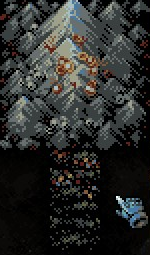 Battlefields are useful cards since they give us a very good loot per round, in exchange for the fact that the creatures within the area can transform into ghosts when they die. Well, if we add two areas of battlefields we transform the path where they converge into a Path of Blood, where the Blood Clot enemies spawn.

Other cards whose areas are added are the Beacons of light and the Beacons, although it is only a stats up of their effects, they do not produce anything extra. On the other hand, cards whose areas do not add up are the Vampire Mansion (only one vampire appears per square, it doesn’t matter if they converge) and the Bloody Groves* (they only take enemies with less than 15% HP, they don’t add up to 30%).

*Although this card is not an initial card, it appears so early in the game that it can almost be considered as such

After playing a couple of expeditions to test the game (beyond the tutorial) and unlock some cards, we can start to choose what exactly we want to do. In the deck creation menu (located at the top left of the expeditions menu) 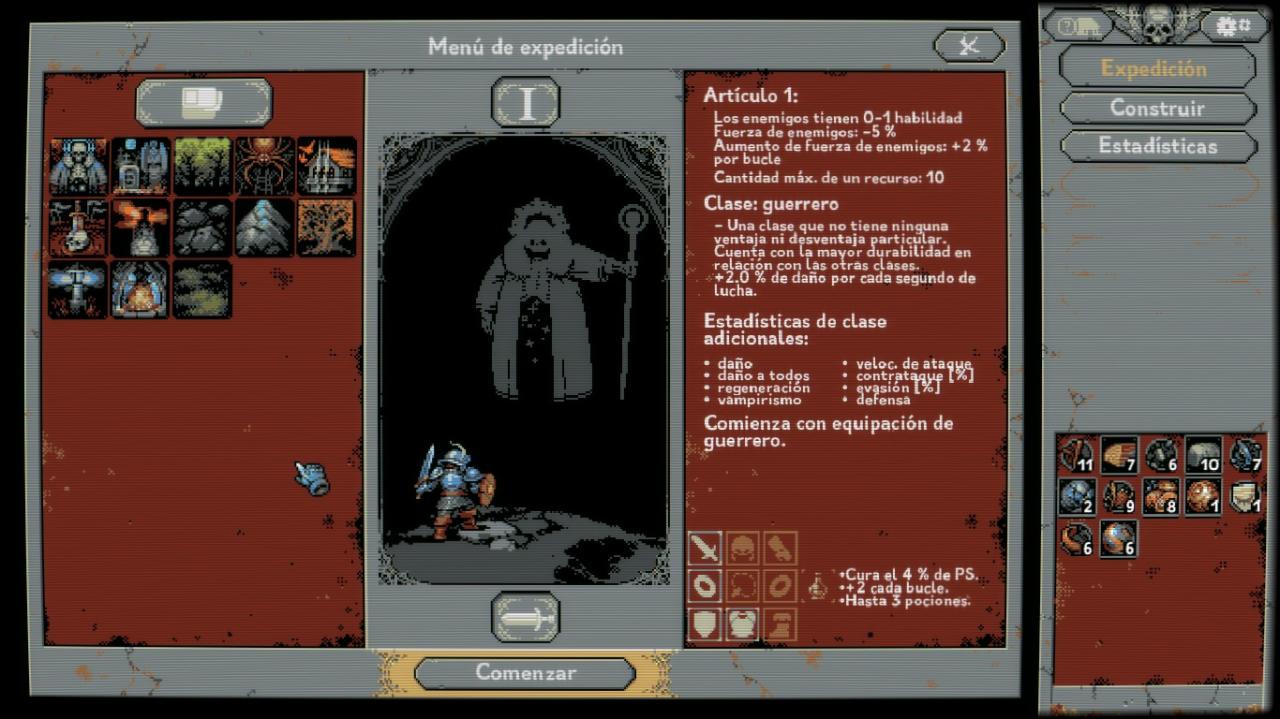 we can customize the deck we are going to play. As you can see in the central part below, the maximum number of cards that can be carried is 12 (although in reality there are 13, since the rock card and the mountain card occupy the same place. This can be seen if we put the cursor over the rock card). 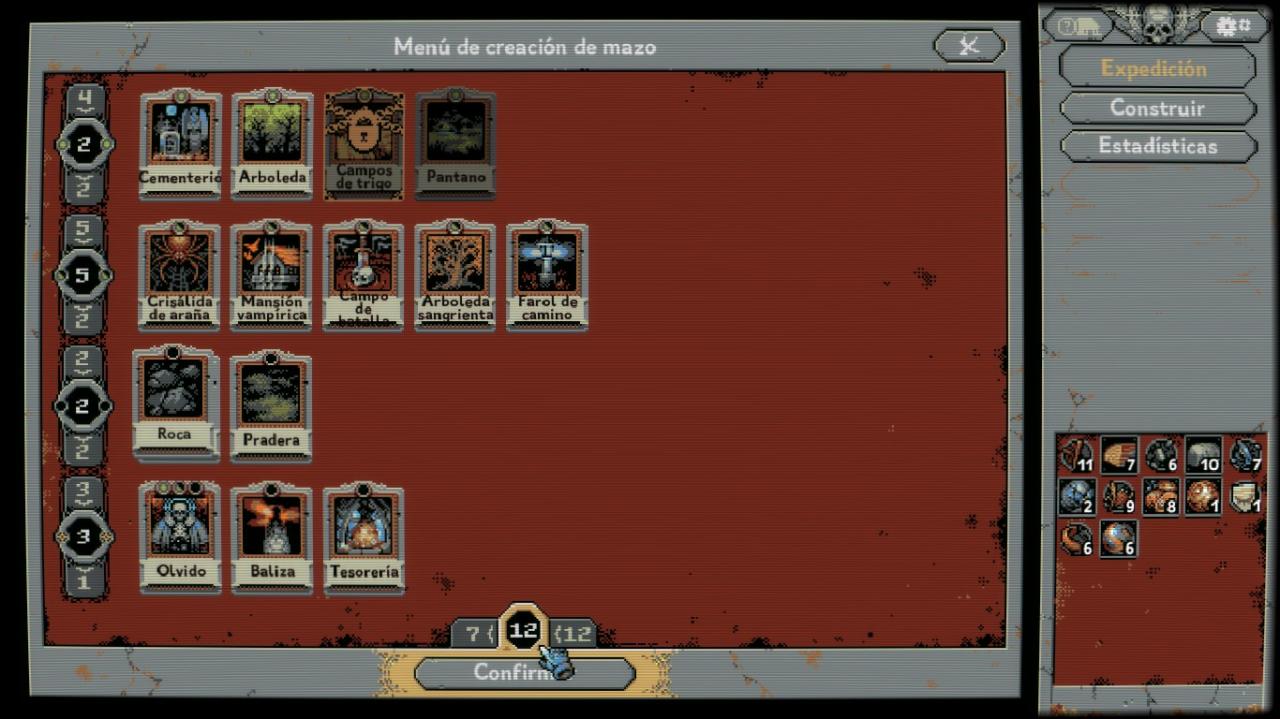 But the game doesn’t tell you that you have to carry it in 12: we can perfectly carry 10, or even 7, which is already the limit.As we have already seen, there are some cards that, either by their characteristics or by the character of the builds offered by the objects in each run, are considerably better than others, and therefore some are terribly bad (of course, this does not mean that they can be very useful on some occasions, it all depends on the stratagem we want to use). Let’s start, then, to edit our deck to ensure good “rotations”.One of the most important cards is the Treasury, as it gives us an additional material for each card we place around it, and once it is completely surrounded it gives us a bonus. The cards that we can place around it are very varied, but the best options are the Meadows because they automatically transform into Flowering Meadows and the Rocks because they also transform the adjacent meadows. We will see the best way to place them once we enter the expedition. 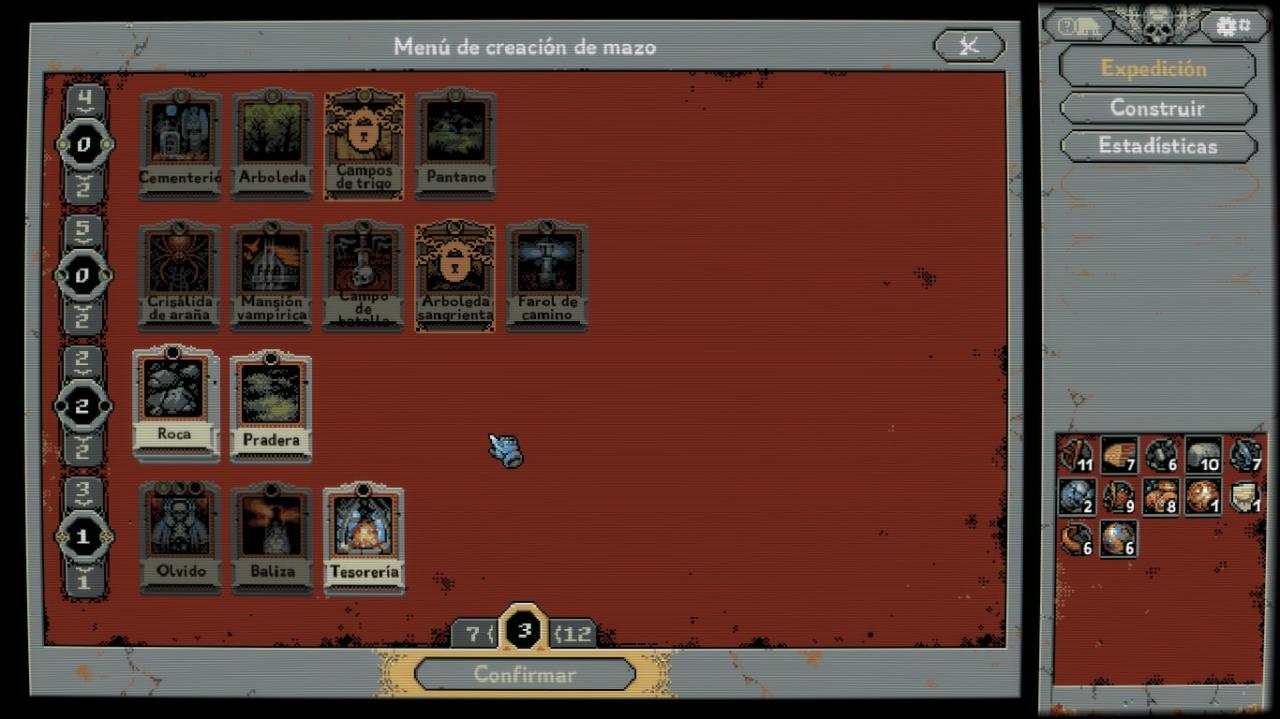 READ:  Loop Hero Maximizing Attack Speed With Thickets
The Oblivion card also plays an indispensable role in the game in relation to the Rocks/Mountains: every time we place 10 Rock/Mountain cards a Goblin Camp appears that we can eliminate with Oblivion; and a 3×3 square of Rocks/Mountains transforms into a Big Mountain that generates harpies every x time. Unfortunately, there can only be one Big Mountain at a time. Fortunately, we can forget a piece of the 3×3 and generate resources again by placing a Rock/Mountain in its place and thus re-generating the Big Mountain. 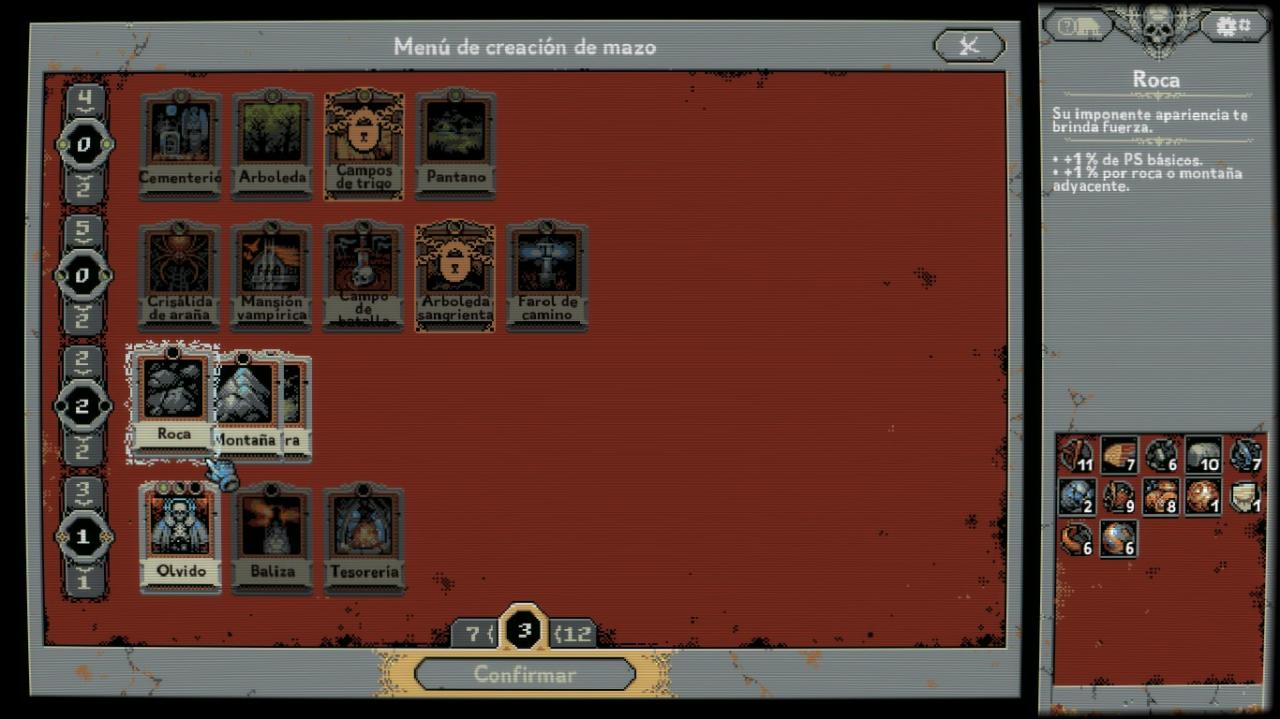 Another card that plays in your favor is the Bloody Grove, since it automatically eliminates enemy units that have less than 15% HP. But this card can only be placed next to a Grove, so we will include it in the Pull as well. 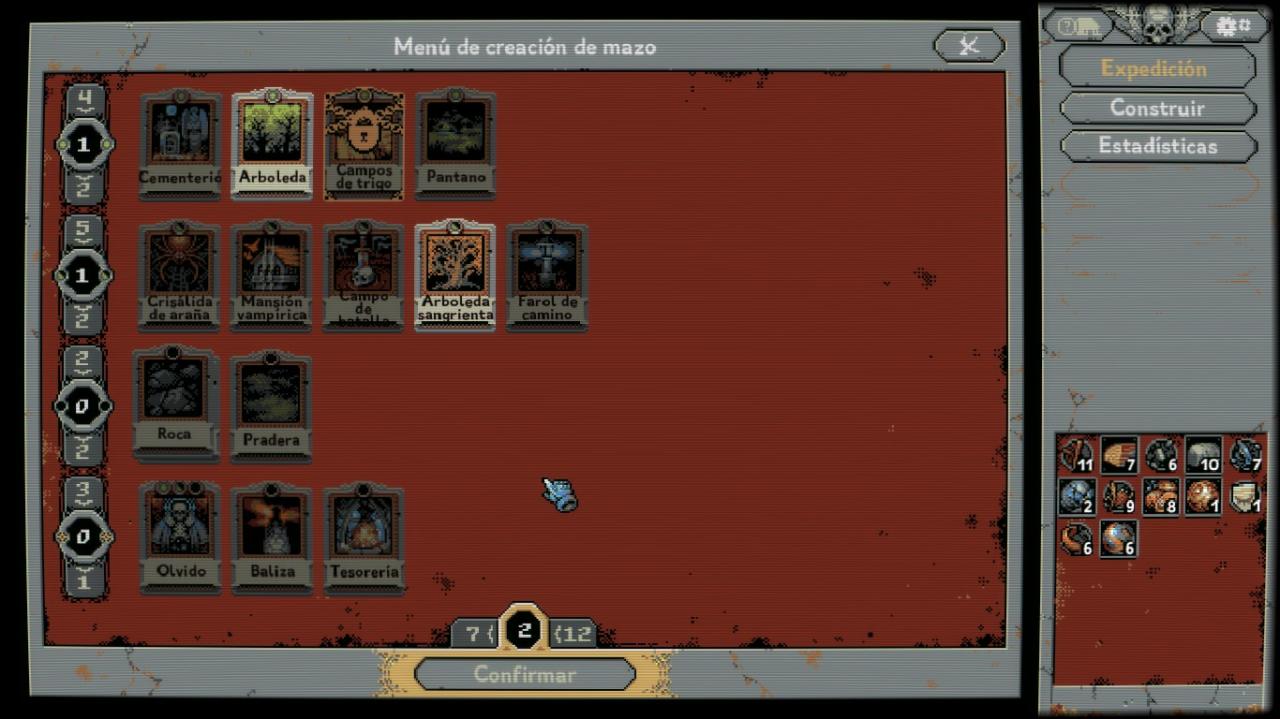 (Bloody grove is not a starting card, but it is unlocked so soon that you will probably have it in your second or third expedition).
Now that we have seen the usefulness of these combos we can create the deck based on that: 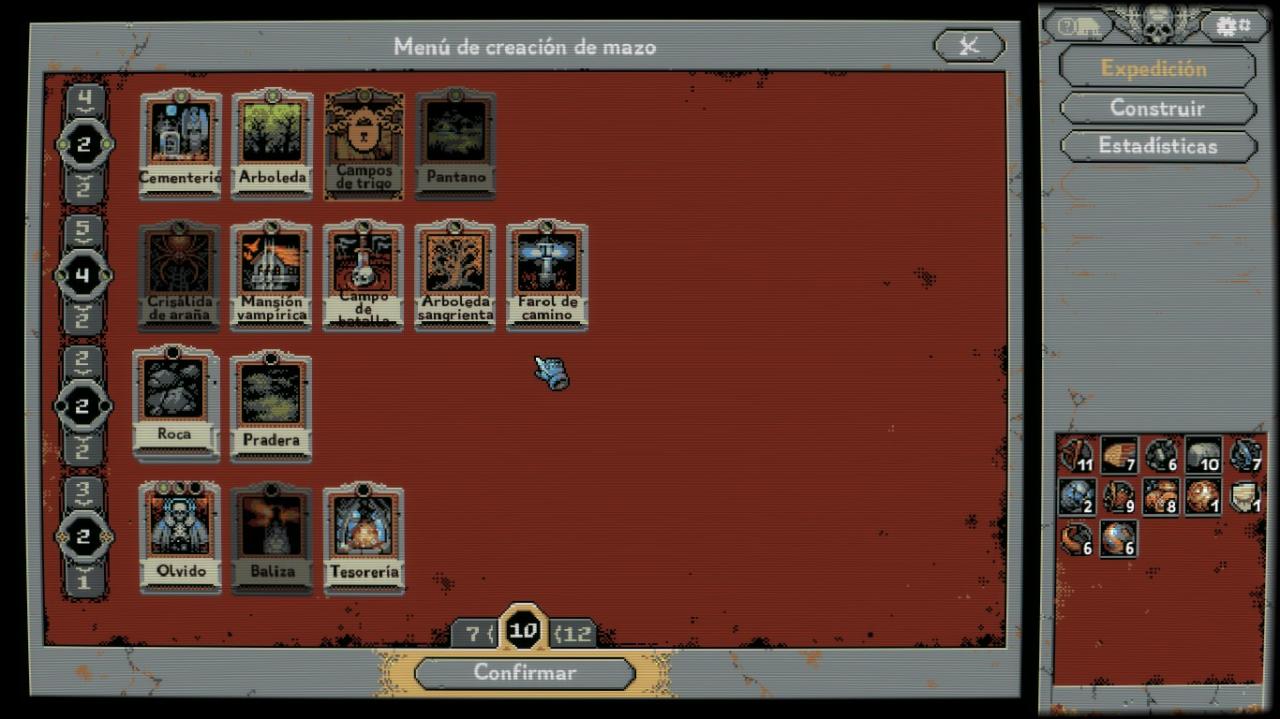 If we look from below, the Beacon card has been removed from the deck to increase the chances of getting Oblivion or Treasury. The Rock/Mountain and Meadow cards also enter the deck because of the abundance and the wide game they give. Of the cards adjacent to the path we can find almost all of them useful, I have eliminated from the deck the Spider Chrysalis because of the amount of spiders it can generate that, although they are not very strong, can be a serious problem if we are attacked by 4 spiders and a vampire or other creature that is generated on the path. The rest of the cards of this type are very useful for the correct development of equipable items. Finally, from the path cards, we select Grove to be able to place Blood Grove and Cemetery to generate skeletons, since the spawn time (3 days) means that they are not a big problem due to the amount of enemies and passing over the square gives us resources. (Like Blood Grove, the cards Wheat field and Swamp are not initial, and although they are early game I prefer to skip them for the moment to not confuse more than I have already done).
Now that we have finished, we can start a new expedition. 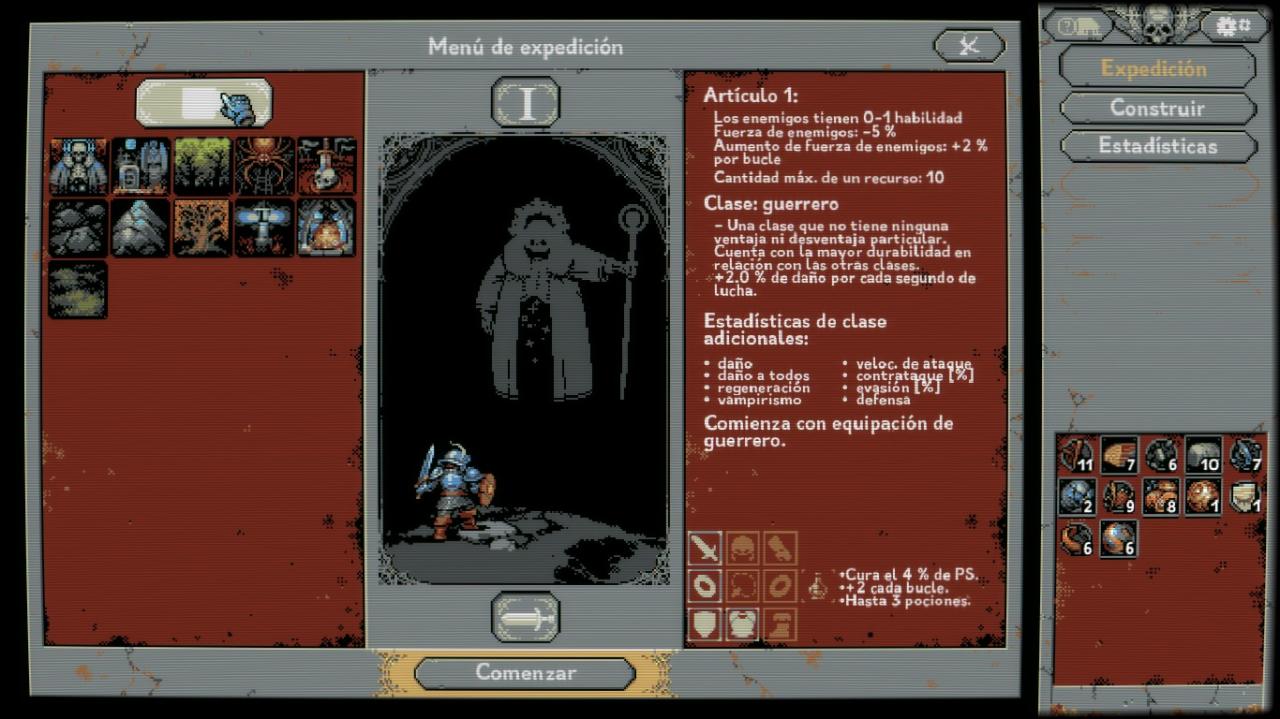 Placement of the cards.

Okay, now that we have seen what we play with, it is time to see how we play. For that we will divide the game in three different parts: Loop, Terrain and Loot. The Loop part will be more focused on the organization of the Path Cards and Adjacent Cards; the Terrain section will focus more on how to organize our passive cards to get good numbers of daily health recovery and resources in a controlled way; and the Loot will cover both the cards we can play and the organization of the objects to be destroyed (WARNING, as indicated in the title of the guide, here we see optimal strategies to get resources, we will not talk about builds in depth). Having said all this, let’s start.

The path is generated randomly in each expedition, so this can be standardized to a certain extent. The most important are the curves, as they give us a larger surface on which to put area effects.

That’s all we are sharing today in Loop Hero Expedition Optimization Guide (Early Game), if you have anything to add, please feel free to leave a comment below, and we’ll see you soon.
Credit to Sr. Sanchovsky