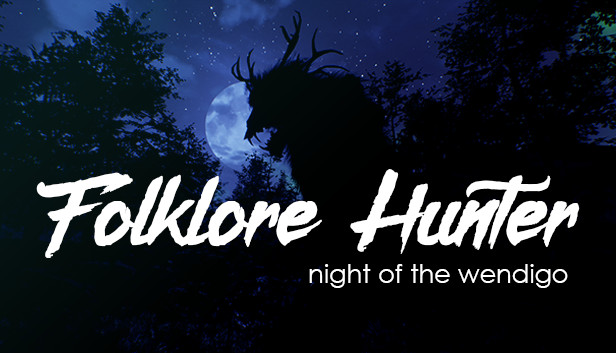 For Folklore Hunter players, this guide will help you thru the game, tell you what to do and explain all the in-game functions, and also teach you few things about the real-life folklore.

Weapons
First things first – weapons. You need something to defend yourself, because mythic beasts won’t wait. There are currently 3 weapons inside the game :

Rifle ( Working )
Rifle will be your trusty friend along the hard way in the cursed woods. It has 4-bullet magazine, and each bullet has to be reloaded separately, so keep an eye on your mag!
Appearances
Night of Wendigo – Basic Equipment
Bloodfang Forest – Basic Equipment

Shovel ( Not Yet Working )
Shovel is now used to dig graves, but more on that later. It has an animation of attack in game, so probably in future updates it will recive some kind of upgrade. Currently its non-functional in combat.
Appearances
Bloodfang Forest – Found near one of the graves, and next to dynamite in Northern Mine.

Stake ( Not Yet Working )
Its not yet confired if the stake will just be a tool to complete Bloodfang Forest’s ritual, or also a weapon, but it has an attack animation in game, so it might be a future weapon. It doesn’t yet work.
Appearances
Bloodfang Forest – Found near the hidden church, held by a skeleton next to the grave

Bandages
Bandages are used to heal your wounds. Currently, they heal 100% health, so you’ll need only one to refill your whole HP
Appearances
Night of The Wendigo – Found in crates
Bloodfang Forest – Found in crates

Meat
Meat is an excellent lure, but remember not to lay it around your hiding spot, because it will attract Wendigo to you. Meat can also be placed in traps to bait Wendigo into stepping into bear traps.
Appearances
Night of The Wendigo – Found inside the shack, can be acquired by killing deers, but remember not to hunt deers with rifle when near Wendigo’s cave, because shots will lure him out

Blank Runes
Blank runes are used with Symbol Instriptions, in order to make runestons, which are vital to completing the game, more on that in walktrough section
Appearances
Night of The Wendigo – Can be found in Shaman’s Cave and in Ruins

Rope
Rope is used to drag Strigois to the graves. You won’t be able to move Strigois if you don’t have the rope equiped.
Appearances
Bloodfang Forest – Found on a watchtower in the Abandoned Village

Stake ( Not Yet Functional )
Stake will be used to pierce the Strigoi’s heart. Its not yet functional. It will probably also work as a weapon, but its not yet confirmed
Appearances
Bloodfang Forest – Found in skeleton’s hands near the grave next to the Hidden Church (See Map)

Lighter
Lighter is used to finish the Wendigo Ritual by lighting the Chalice (?) next to the Altar in Ruins
Appearances
Night of The Wendigo – Given as basic gear at the start

Walkthrough ( Night of The Wendigo )

Here you have a list of “Quests” necessary to complete the game :

These are all the necessary steps to complete the Night of The Wendigo mission. Here is the map if you need it : 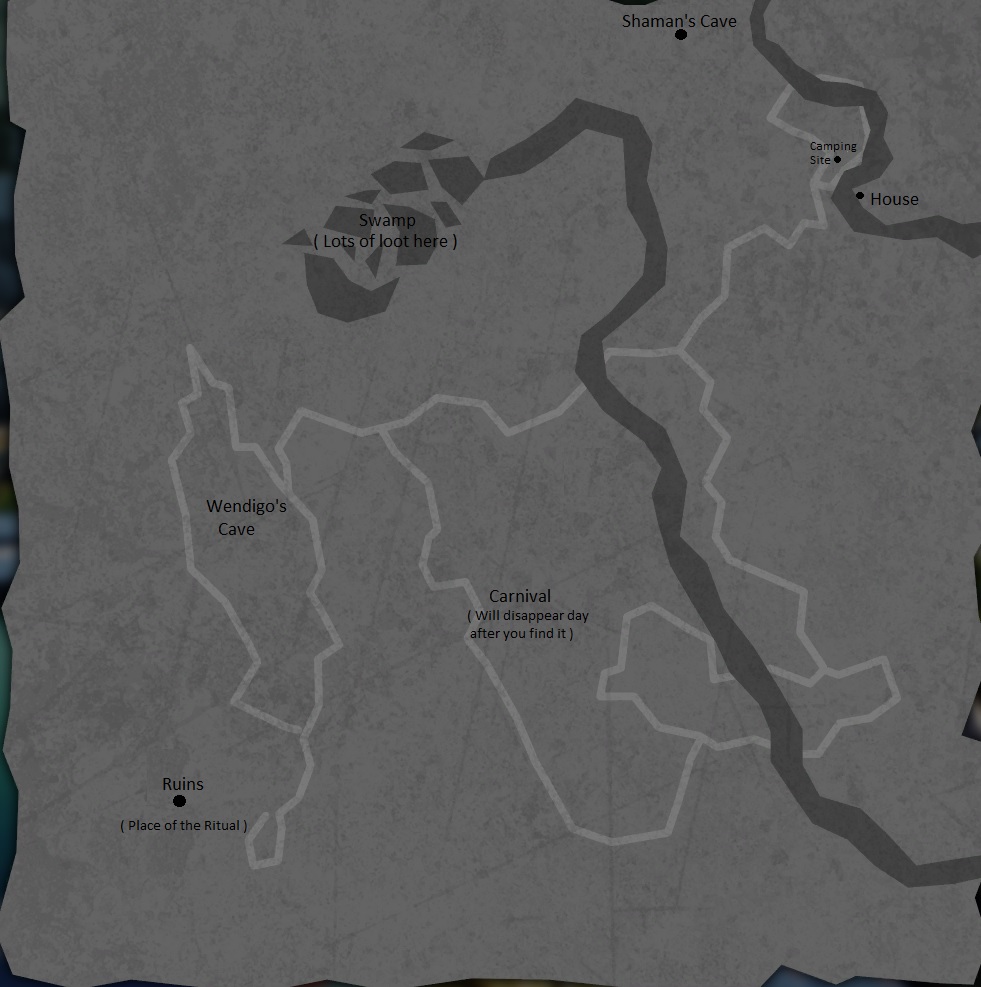 This is as far as you can go now, I will update the guide as the game development continues.

Here is the map if you need it.: 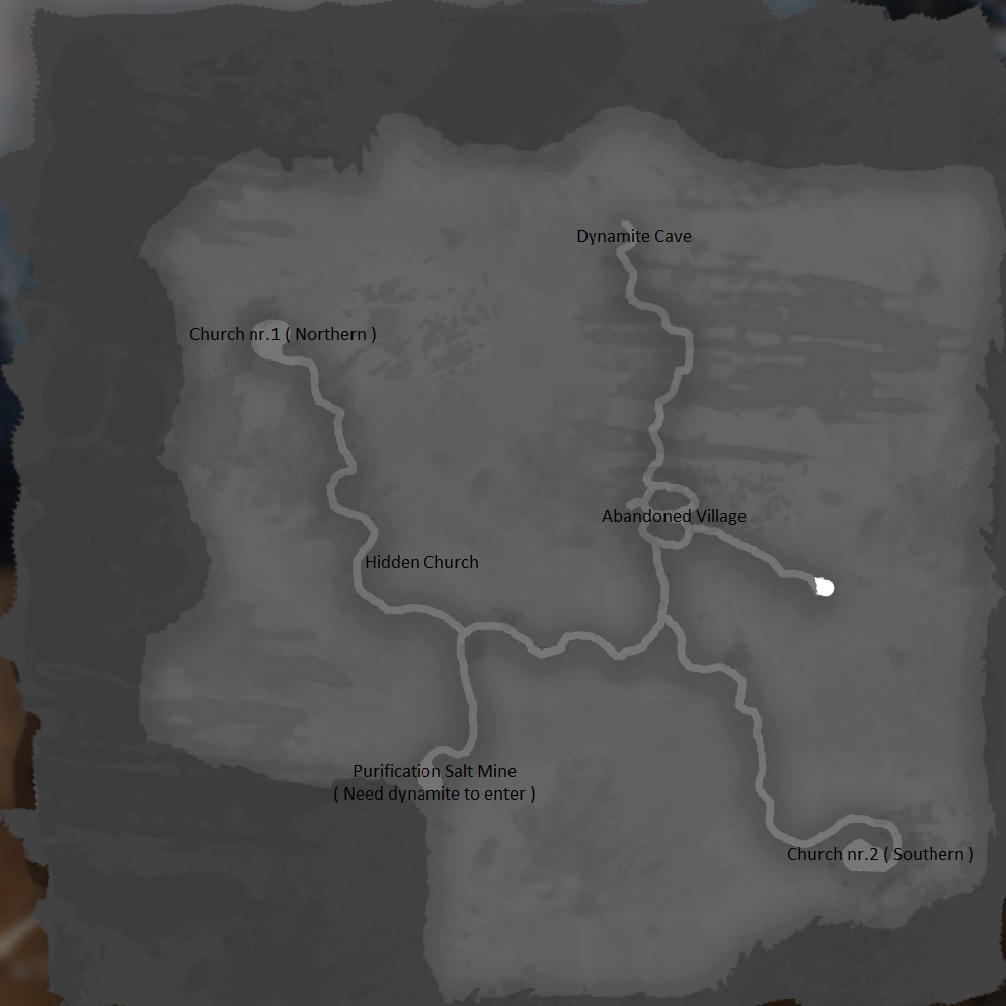 – Enemies can hear gunshots, so don’t try to hunt stags in the middle of the night, if you want to survive until dawn
– Don’t be careless. Conserve your ammunition and bear traps, because there aren’t many of those, and, trust me, you’ll need them
– Don’t stay out too long. 4 PM is an optimal hour to head back home, if you still have it. Wendigo is hard to track in the night, especially on low gamma
– Make use of the cameras. They can work as a light source, a map marker and as an enemy radar, because they register movement and warn you
– If you plan on going out at night, place some meat far away from the destination you are heading to. It will lure Wendigo away from you and keep you partially safe
– When you encounter Wolves at night, just run. If you shoot them, as I said, Wendigo will find you, and you can’t just shoot him to death.
– Use your surroundings to your advantage – hide on rocks, run where enemies can’t access you and hide out of their sight

And the most important rules of all
– Join our discord https://discord.gg/B9u6pUA
– Follow SmirkStick on Twitch https://www.twitch.tv/smirkstick
– Report the bugs on our discord or on Smirk’s streams
– Have Fun !

What is Wendigo and Strigoi

Wendigo
Legend about Wendigo has many diffrent versions, but this is the most popular one.:
Wendigo is a mythic beast, that controls the dead, and cursed the alive ones. It is a tall, humanoid-shaped creature with animal’s skull instead of a face. Most important part of his body is his frozen heart. In order to defend yourself you’ll need to melt it. Wendigo is said to appear in North America, and it originated from old native Americans’ stories. Sources say, that Wendigo is created whenever someone is rejected by his loved one. When the sun shines, he has a human form, and attacks people that have similarities to his human form, but at night it takes his monster form. Some legends say, that his body is partially made of ice, and he either has a deer skull or a deer’s head. Some of his bones are shown, and often bloody. When Wendigo chooses his victim, he makes it paranoid and drives him to insanity. When his victim is helpless, and can’t differ what is real and what isn’t, he attacks, and rips his victim’s body apart. Wendigo’s night form can be up to 13 feet in height, so trying to fight him alone is foolish.

Strigoi
Strigois originated in Romania, and they are said to be a troubled spirits that can take an animal’s form, or even turn invisible. Strigois feast upon victim’s blood. To keep yourself safe, you need to take similar steps as when encountering a vampire – pierce his heart with a stake, turn the body face down and bury it, pierce his forehead with a nail, and put a clover of garlic under his tongue. They can be extremly fast, and often attack in packs. Sun can damage their real form, so when sun shines, you are safe from them. They are demons that rise from dead’s body, so in order to get rid of them for good, you’ll need to cleanse the tomb where the Strigoi’s dead body lays.

That’s all we are sharing today in Folklore Hunter Ultimate Guide of Everything You Need to Know, if you have anything to add, please feel free to leave a comment below, and we’ll see you soon.
Credit to Kaiser Markus IV