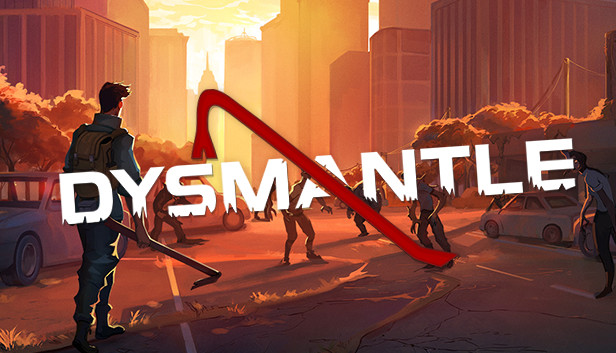 If you are collecting achievements in DYSMANTLE, this is guide of obtaining 100% achievements, let’s check them out.

Kill 100 monsters of any type.

There is currently 12 different types of monsters and ex-creatures wandering through the island. You’ll get this achievement pretty early on and without even noticing.

Gatekeeper is the first boss you will encounter in the game, it’s located in the East part of Capernaum, at The Caged Suburb and you’ll need to defeat it to be able to open the gate, granting you this achievement.

Fish You Were Here

Catch 10 fish of any rarity.

There is a total of 116 fishing spots in the game. Fishing Rod is unlocked by the quest with the same name.

After you’ve completed a fishing spot, it will longer supply you with fish.

You will find the Escape Pod by proceeding further on the main quest.

There are currently 87 item recipes in the game, including recipes of perks, features, trinkets, weapons and clothing. Some of them will be given to you from searching on containers or by completing quests, etc. 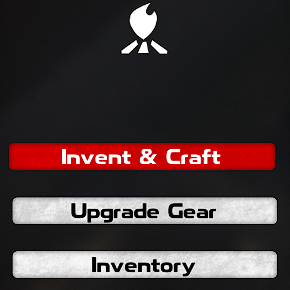 You will find farming spots in different areas of the island, or you can make your own by using a Hoe. 7 types of resources are able to be planted, by using the Bag of Seeds.

To get this achievement, you will need to fill all slots in the bottom with materials, doesn’t matter which type. This is done the easiest with Plant Matter by ripping off any vegetation you see.

Grow and harvest any 6 different types of plants.

You will need a Hoe and Bag of Seeds for this achievement. The picture below shows the 7 different types of plants you can grow and harvest, but you only need 6 for the achievement. 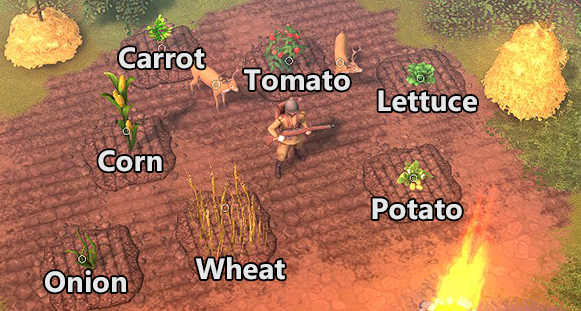 Who Wants to Leaf Forever

Fill 8 material slots with the same type of material.

This achievement is similiar to ‘Full Load’. As mentioned, you can do this very easily with the Plant Matter material.

Law is one the robot automaton bosses you will need to fight as you proceed in the main quest ‘Escape the Island’. It is located at Borealis Corrective Facility and you will need to destroy it. Before the fight can be started, you need to scan its location first by using the Canaveral Link Tower.

OPTIONAL: If you found a Shelter Loudspeaker and started the quest Shelter Defence: Law, along with all the other robot bosses can be easily defeated by building Machine Gun Turrets around it, then starting the combat. Be quick, though, as your Turrets do not have an infinite clip and need to be reloaded manually by you.

Another robot automaton boss, located at Everglade. Read about the ‘Law’ achievement for more information.

Yet another robot automaton, located at Frost Horn. Again, read about the ‘Law’ achievement for more information.

The last robot automaton, located at Solaris. Defeating this boss and inserting all of the other 3 Fuel Cells on the Escape Pod will unlock the last area of the game, Crown.

There is over 60 radios scattered through the island, you will need to interact with at least 50 of those. It is not necessary to listen to the full radio message, after interacting with a radio you can freely continue to move on and it will still count. Some of the radios are inside Shelters (check the achievement Shelter Cleaner), and some inside Undercrown. 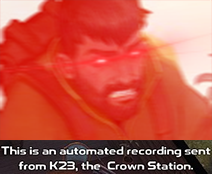 Upgrade 7 Tools to the maximum level.

There are 37 tools that can be upgraded at any campfire, assuming that you’ve got enough resources. 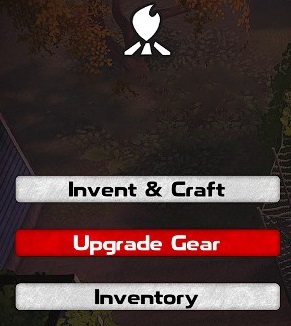 Build It And They Will Come

Build 10 structures of any type.

You will unlock your first two structures when you travel to Pike’s Steel Manufacturing (878º, 598º) in Narrows Vale, where you will find the side-quest Smelter Building Basics. And in Krebbs’ Wood & Timber (1044º, 237º) located at Hibernus for the quest Sawmill Building Basics. Both quests unlock the smelter and sawmill structures respectively.

Using the Builder’s Kit, you do not need to keep all 10 built at the same time for the achievement. With the perk Teardown Efficiency, you will be able to get all used materials back when breaking an structure you’ve built, making this achievement much easier.

Medals are in-game rewards that grant you with XP as you do relevant tasks. You can check your current progress by opening up the menu > Collection > then select Medals on the left.

Light all Campfires on the Island.

There are 103 campfires in total, 99 on the main island and 4 in Undercrown, which you will unlock by progressing on the main quest.

You will reach this area as you proceed on the quest main quest. It is located at the center of the map.

Discover and activate all Link Towers on the Island.

There are 19 Link Towers in the game, you need to activate all of them to get this achievement. When exploring a new area, it is recommended to focus on activating the Link Tower first, since it reveals the whole map of that area when you do so.

Investigate all the Myth Tablets on the Island.

There are 13 Myth Tablets on the island, but only 10 count towards the achievement. The one last of the 10 Tablets is in Crown. Myth Tablets tell the tale of the king, investigating all unlocks a new area on the island.

The Ark is located at Frore. This is not an easy achievement to obtain, due to the amount of samples each of the Ark collections require. 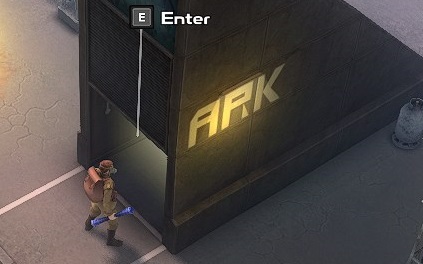 Complete all Tombs on the Island.

You need to complete 20 Tombs for this. You will be able to enter a Tomb after crafting Rope And Hook, unlocked by proceeding on the main quest to the point where you need to activate the Link Relays. The Pyramid Tomb is not needed for this achievement. 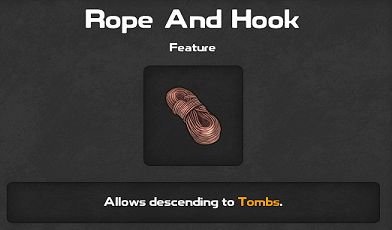 Visit all shelters on the Island.

When you approach a Shelther Loudspeaker for the first time, you will be given the quest Shelter Defence. Different Shelters have a different amount of waves. There are 8 Shelters to visit on the island, you get this achievement when you enter the your 8th Shelter. The Shelter you come out of in the beginning of the game is not included in this. Keep in mind that your Turrets do not have an infinite clip and need to be reloaded manually by you.

Use all Wishing Wells on the Island.

A total of 15 Wells need to be used for this achievement. You only need to use each Well once.

You can feed Deers and Caribous by using Animal Treats. You need to do this with 10 different animals on the island, refill your Treats by going to a campfire. 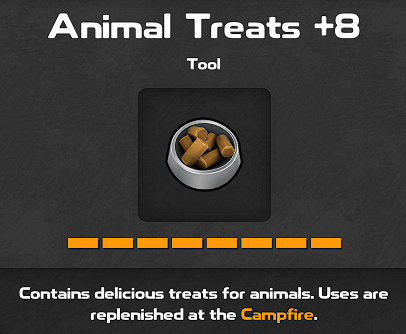 Currently, Namazu is the only legendary fish on the game. There are no ways of increasing your chances of getting a legendary fish from fishing spots, and it is entirely random.

Max out all the Obelisks on the Island.

Approaching a Obelisk for the first time will start the Mysterious Obelisk quest. You need a Blue Eye Orb to activate Obelisks, which can be obtained by completing a Tomb (check the Rude Archaeologist achievement).

To get this achievement, you need to finish all waves from the 7 total Obelisks. Activating the bonus of each Obelisk is not needed, only one for the quest.

Travel through all the Rifts on the Island.

Mana Rifts will show as a question mark on your map as you discover them. You will be able to use Mana Rifts after crafting the Rift Toolkit which is unlocked by completing the quests ‘Strange Energy’ and ‘Displaced’. Strange Energy starts once you find a Rift for the first time. There are 32 Mana Rifts on the island.

Complete all the Side Quests.

You need to complete all the 52 side quests in the game for this achievement. Some quests start automatically when visiting a new area or inspecting an object. To know your progress, open the menu > click Collection at the top > then Total Progress on the left.

If you need to find which quest you haven’t done yet, below is the list of all quests in the game:

Open all Timed Chests on the Island.

To open a Timed Chest, use the nearest campfire then make your way to the Chest as quick as possible.

If you are unable to open a certain chest: Later on in the game you will unlock tools that will allow you to take down trees, walls and any objects in your way, making it much easier to open Timed Chests. All 51 Chests need to be opened for this achievement.

Please note that several Timed Chests are located in inaccessible places require access to Mana Rifts to be completed. Check the Rifter achievement for more information.

Dig up all buried treasures on the Island.

93 specific spots need to be dug with a Shovel, in many different parts of the island and 4 in Undercrown. 97 spots in total for the achievement.

Please note that several digging spots are located in inaccessible places require access to Mana Rifts to be completed. Check the Rifter achievement for more information.

Complete all Points of Interest on all locations.

This achievement requires you to complete all POIs on the map (turn ALL icons green). Considering most quests are linked to these, it will be the last achievement you will acquire. 17 types of POIs need to be completed, in a total of 541 points of interest.

If you seriously wish to pursue this achievement, it is highly recommended to use OGMods‘ guide and their DYSMANTLE Interactive Map[ogmods.github.io].

That’s all we are sharing today in DYSMANTLE 100% Achievement Guide, if you have anything to add, please feel free to leave a comment below, you can also read the original article here, all the credits goes to the original author Archives