For CRISIS CORE –FINAL FANTASY VII– REUNION players, this guide will give you information on how to collect everything that is missable in the game.

In this game, there are a several collectibles that require you to talk to an NPC to unlock them. After the end of every chapter of the game the NPCs in all areas will change and they will have different dialogues, making some collectibles not obtainable after the end of the chapter until you unlock New Game Plus.

Missions will have a yellow marker on the map, however, if you rush through the game and did not explore the areas available before the end of these chapters, you’d likely miss them.

Each section will be available as I beat the game.

Before going to the Main Quest
Mail: Kunsel – Congrats on your first mail!

Received after completing mission M1-1-1: Shinra’s Basic Training before going on the main quest with Angeal to Wutai.

Received after completing mission M1-1-1: Shinra’s Basic Training before going on the main quest with Angeal to Wutai.

When Kunsel tells you to pick up a free item in the Supply Pod 6 after you complete mission M1-1-1: Shinra’s Basic Training, if you try again he’s going to tell you not to be greedy. However, if you insist and keep trying, you’ll receive the Cursed Ring.

Received near the Save Point on Mt Tamblin – Mountain Path near the end of the map.

Achievement: Hero of the Wutai War?

You need to defeat all enemy encounters in Fort Tumblin. Most of the encounters are triggered automatically as you walk through the map and some of them are hidden, there will be a button prompt right at the hidden ones. There are 3 rotating walls, which can only be rotated by a specific side, and 2 towers. Also, don’t forget the fountain shrine right before going inside the palace in Wutai.

Received near the Save Point on Mt Tamblin – Mountain Path.

Before going to the Main Quest
DMW Image: Tseng

Received automatically at the beginning of Chapter 2.

Mail: Kunsel – What I think about Angeal

Received automatically at the beginning of Chapter 2.

Zone: Sector 8 – Fountain
South from the fountain on Sector 8, speak to the Genesis Fan with a yellow mark to join their Fan Club.

Zone: Sector 8 – Fountain
Right next to Genesis Fan, speak to the Angeal Fan with a yellow mark to join their Fan Club.

Received right after joining the Keepers of Honor Fan Club.

This email will pop up right after entering the LOVELESS Avenue zone.

Go straight on LOVELESS Avenue and speak to the Genesis Fan with a yellow mark to join the LOVELESS Study Group.

Zone: Sector 8 – LOVELESS Avenue
Turning at the first right corner of the LOVELESS Avenue, you will find the Shinra Captain. Talk to him to unlock these missions 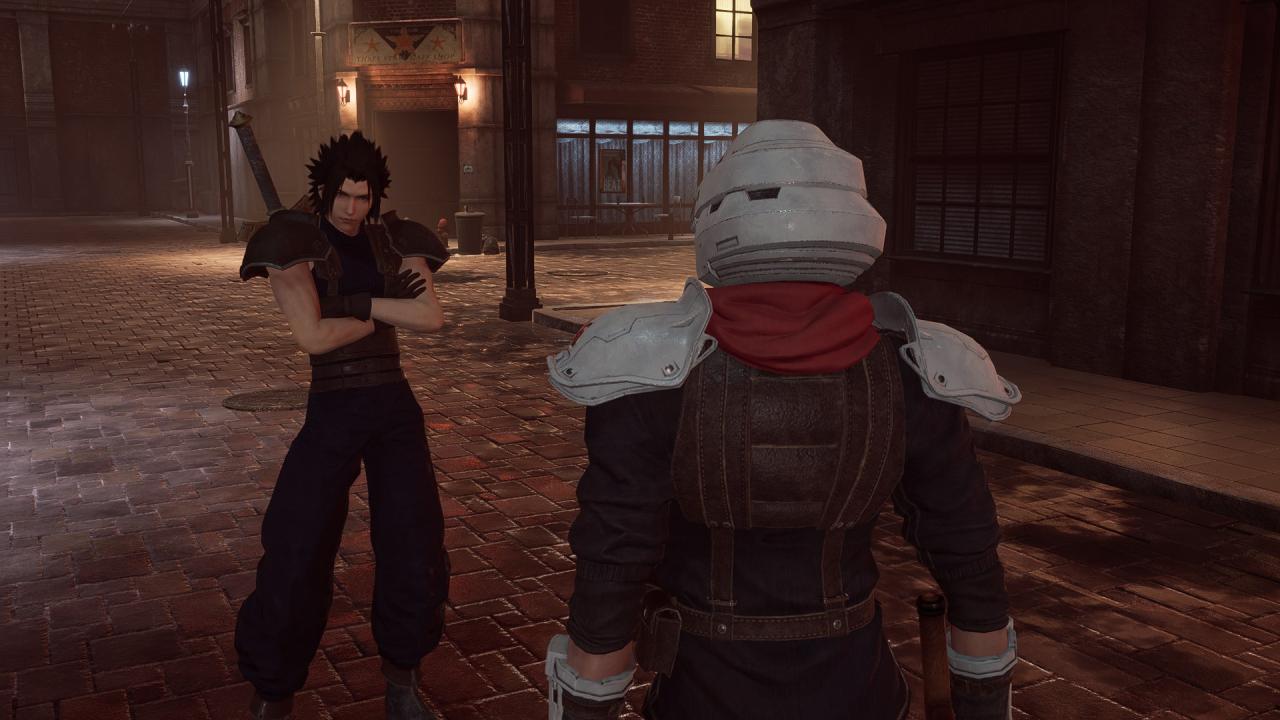 After receiving the previous mission from the Shinra Captain, you need to complete all M1-2: Peacekeeping Troops missions, from M1-2-1 to M1-2-6. The missions difficulty goes from 1 to 3 stars. After completing all of them, go talk to the Captain again to receive the Craftsman Monthly. You’ll need it for later to get the Midgar Full of Flowers achievement. 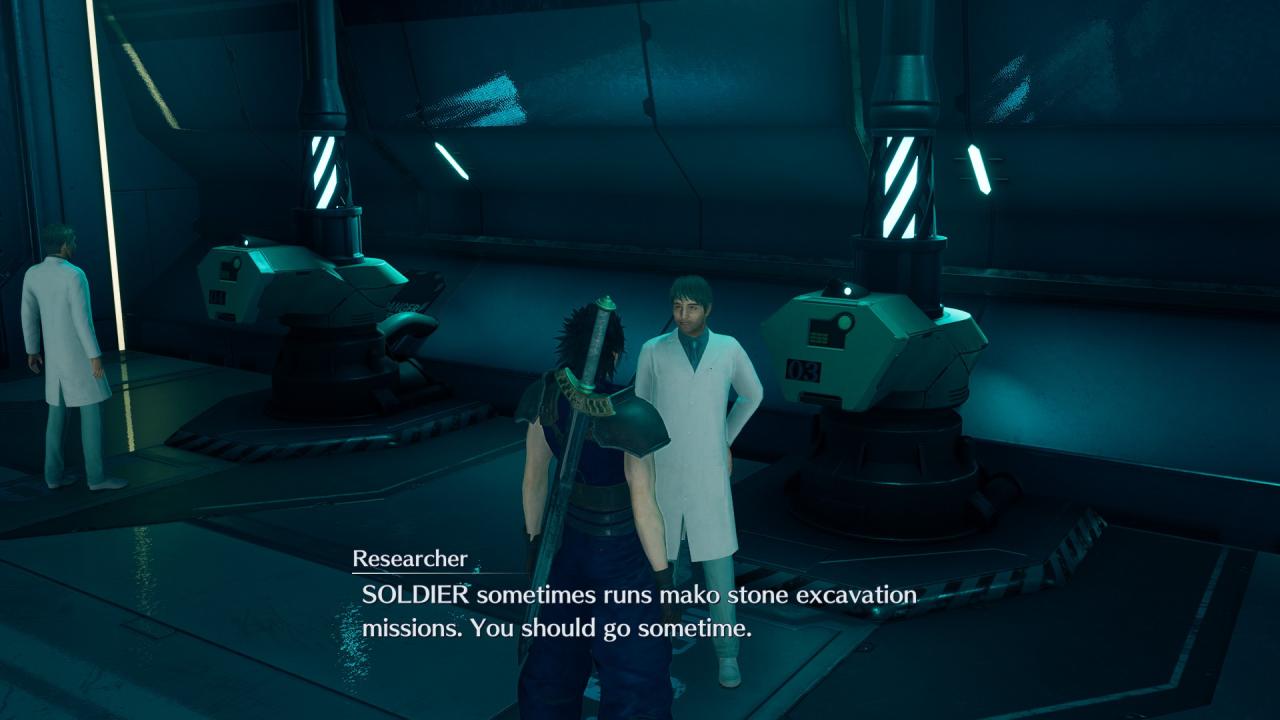 Inside the Shinra Building, in the SOLDIER Floor, speak to this Researcher at the Materia Room to unlock these missions. 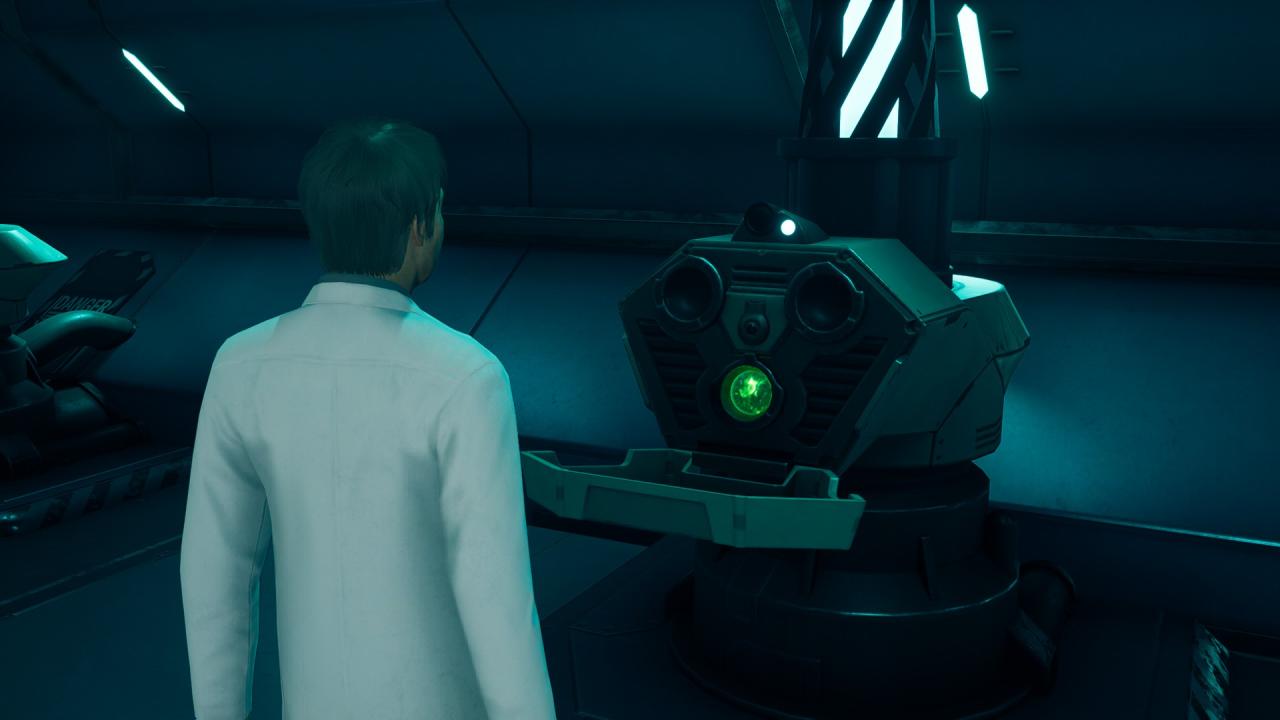 After receiving the previous mission from the Researcher, you need to complete all M8-2: Mako Stones missions, from M8-2-1 to M8-2-6. Their difficulty goes from 1 to 4 stars and are relatively easy, being able to complete all of them at a low level with no grinding. If you’re not being able to beat these missions, just buy a few Potions, Elixirs and Remedies to try again. After that, bring all the Mako Stones to the Researcher and he will give you a Materia for each one of them. When all Mako Stones are given, the Achievement will pop up. 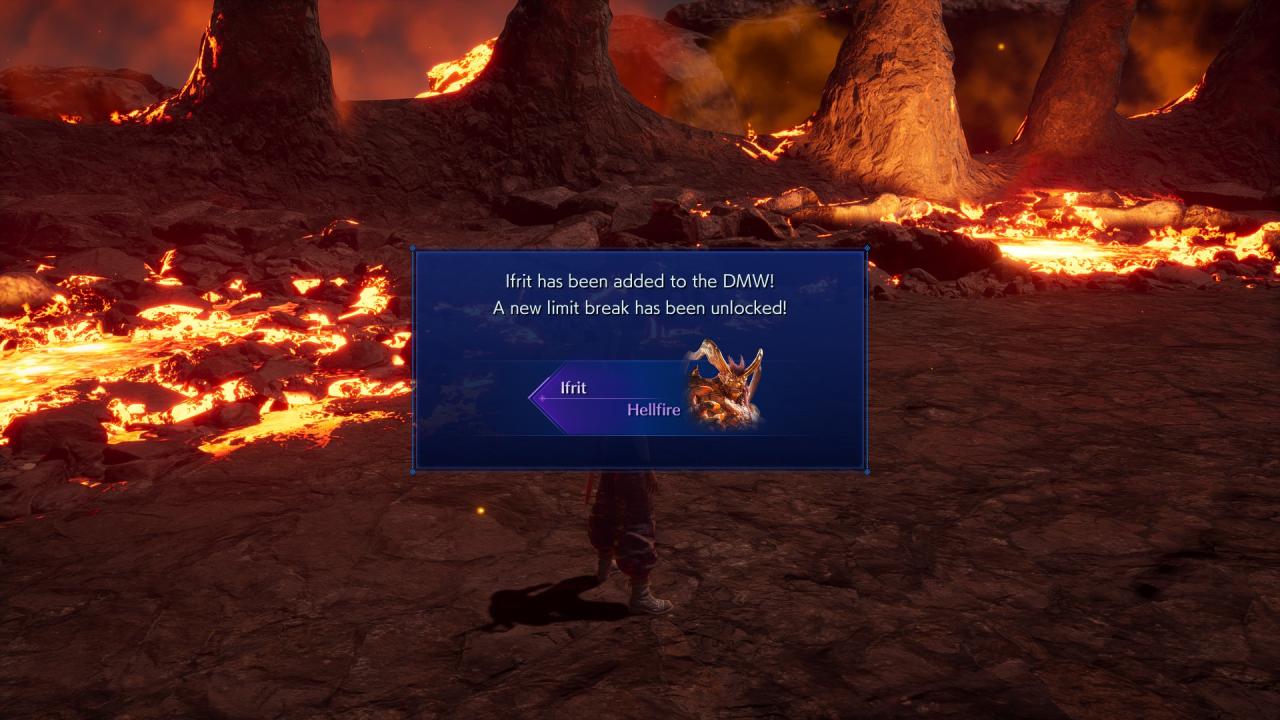 To get the Ifrit Materia, you need to complete mission M8-1-1: Rematch with Ifrit. This mission will always be available and is not missable. 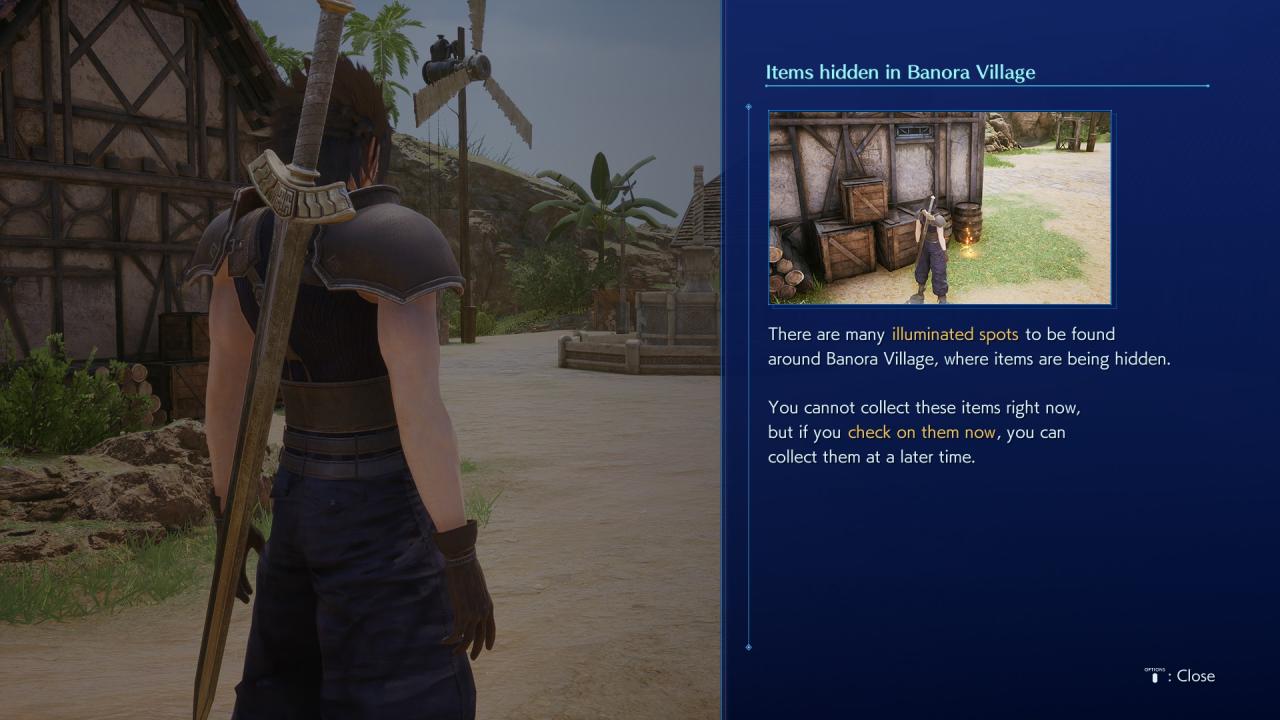 When getting near the houses in Banora, you will be prompted about hidden items. Interact with every single one of them. There are a total of 5 items, 3 near the houses, 1 before the cliff and 1 at the top of the cliff near the Factory.

Received automatically when getting near the Factory in Banora after talking with Angeal’s mother. 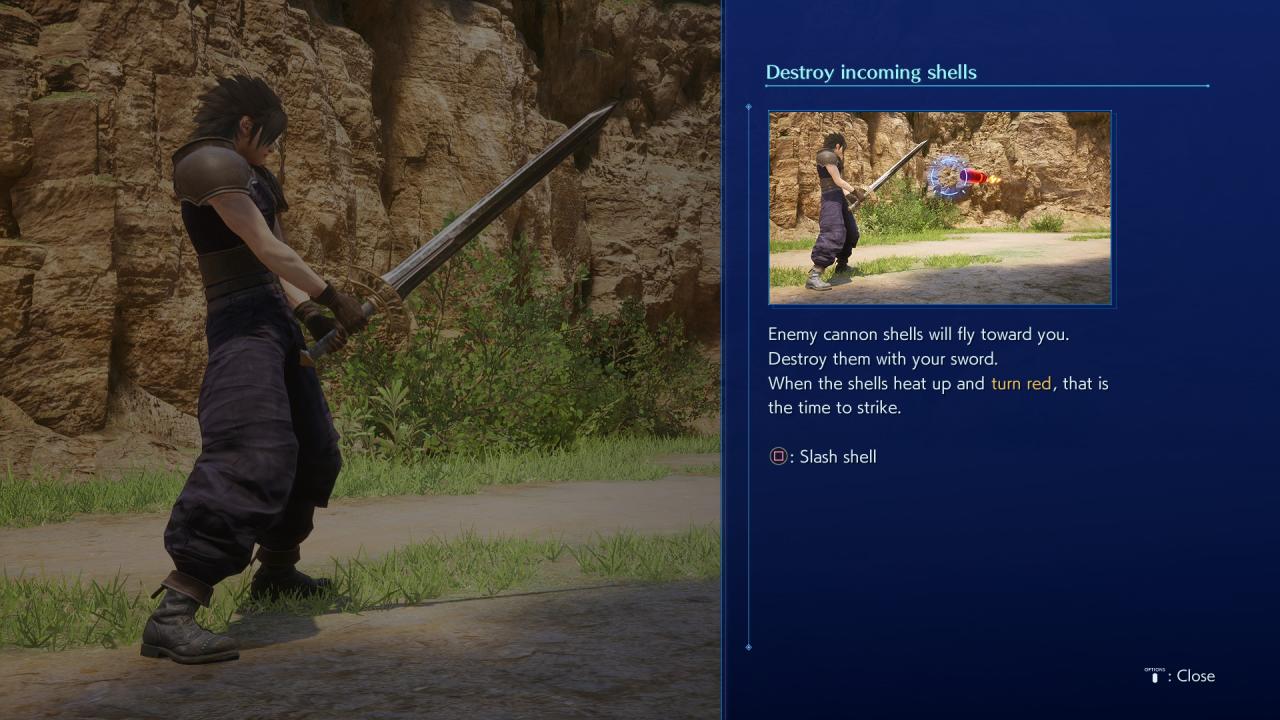 Save before leaving the Factory after Genesis. You need to be able to slice all 10 rockets in the Destroy incoming shells minigame without missing. The achievement will pop up right after you finish it. If you did not succed, reload your save and try again. 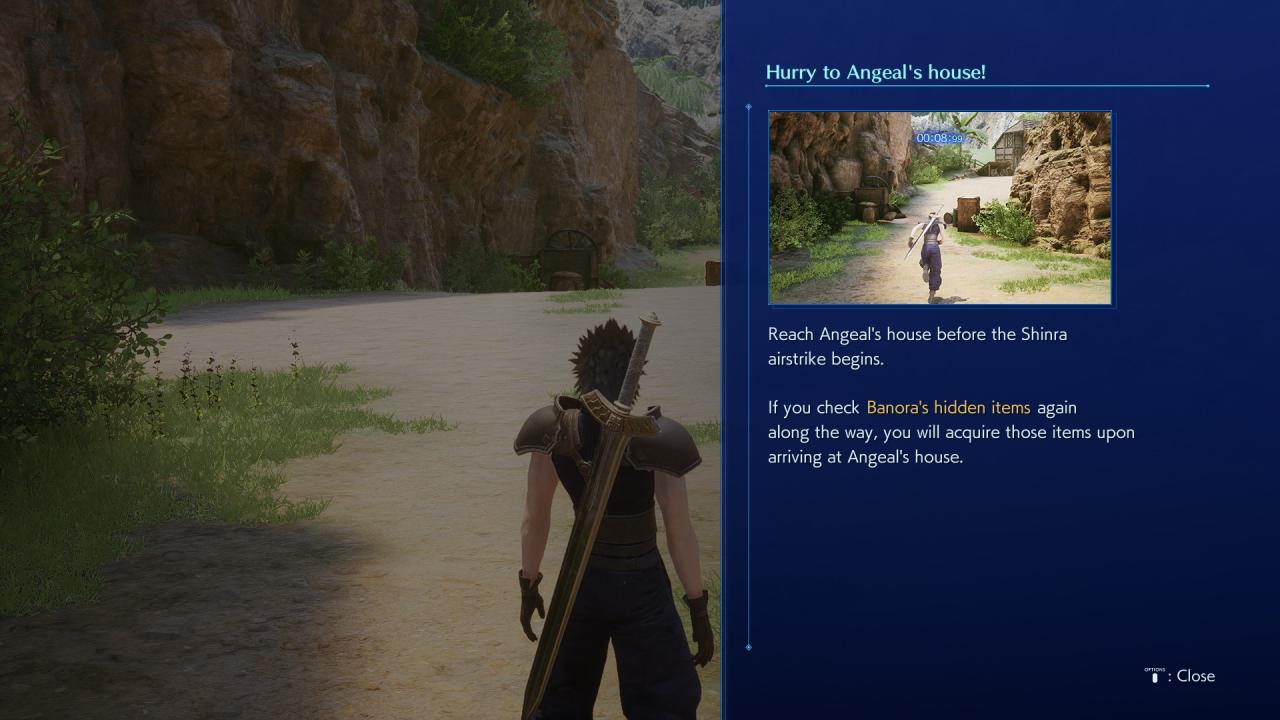 You will have a timer of 45 seconds to get all of the previous items that you’ve interacted in Banora, pretty easy. You’ll get the items and the achievement when you get to Angeal’s house.

Still under construction.
Before going to the Main Quest
Mail: Kunsel – Angel in white?

Received automatically at the beginning of Chapter 3. 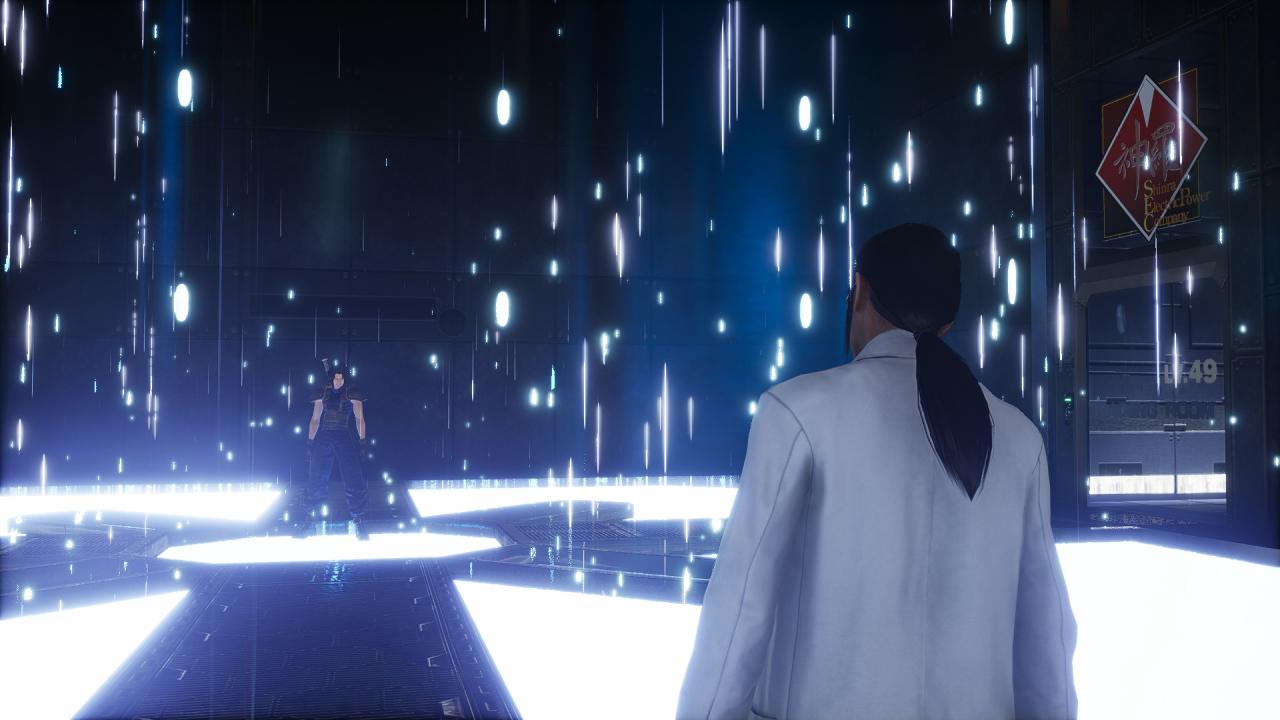 Go to the Training Room and talk to Hojo, complete all 4 of his VR combats to unlock this achievement. 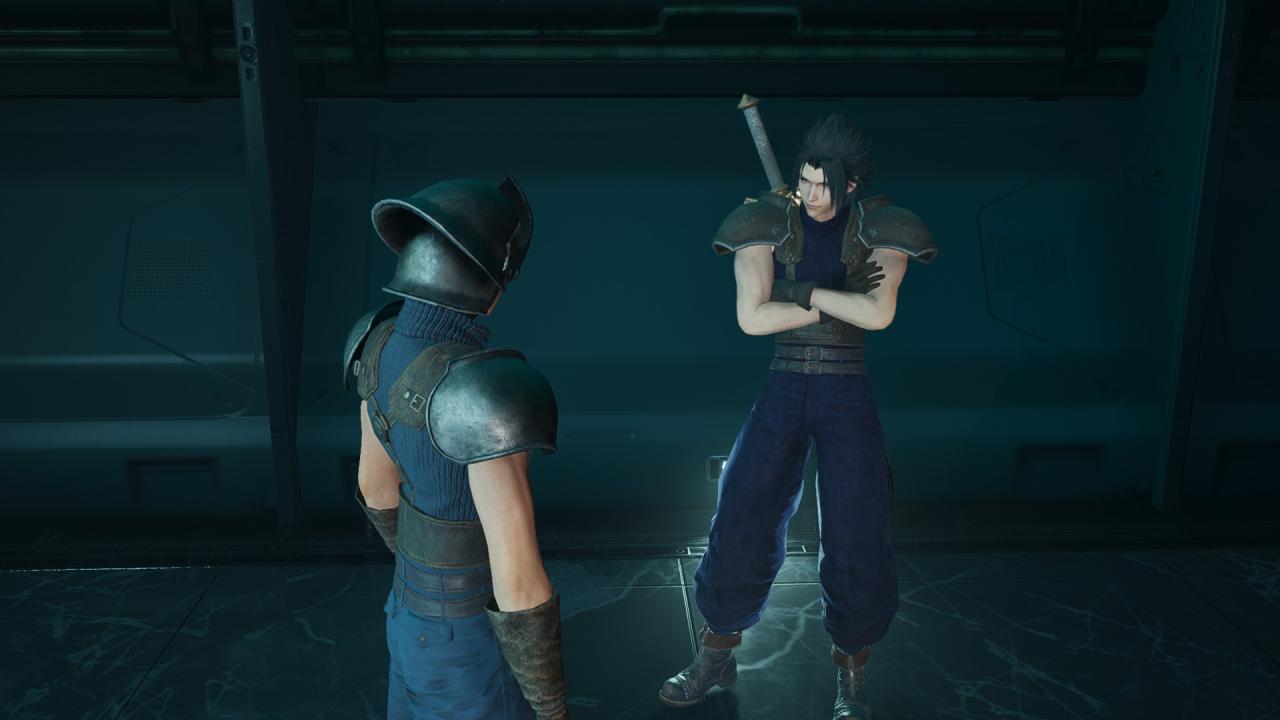 At the Briefing Room, speak to the SOLDIER 3rd Class to unlock these missions. 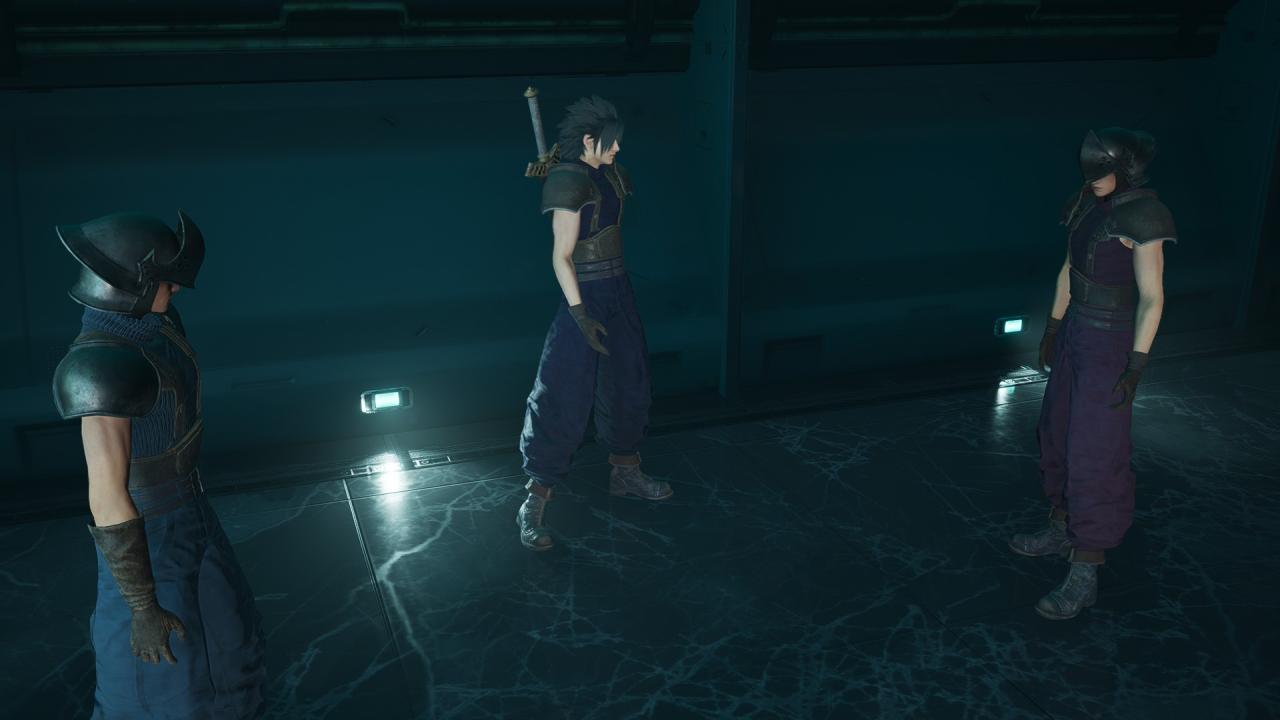 Complete all M7-1: Recall Missions from M7-1-1 to M7-1-6. When you finish all of them, go talk to SOLDIER 3rd Class to obtain the Premium Tires.

Mail: Lazard – At the end of war

Received automatically when you get near the elevator of Shinra Building.

Received automatically when you get near the elevator of Shinra Building. 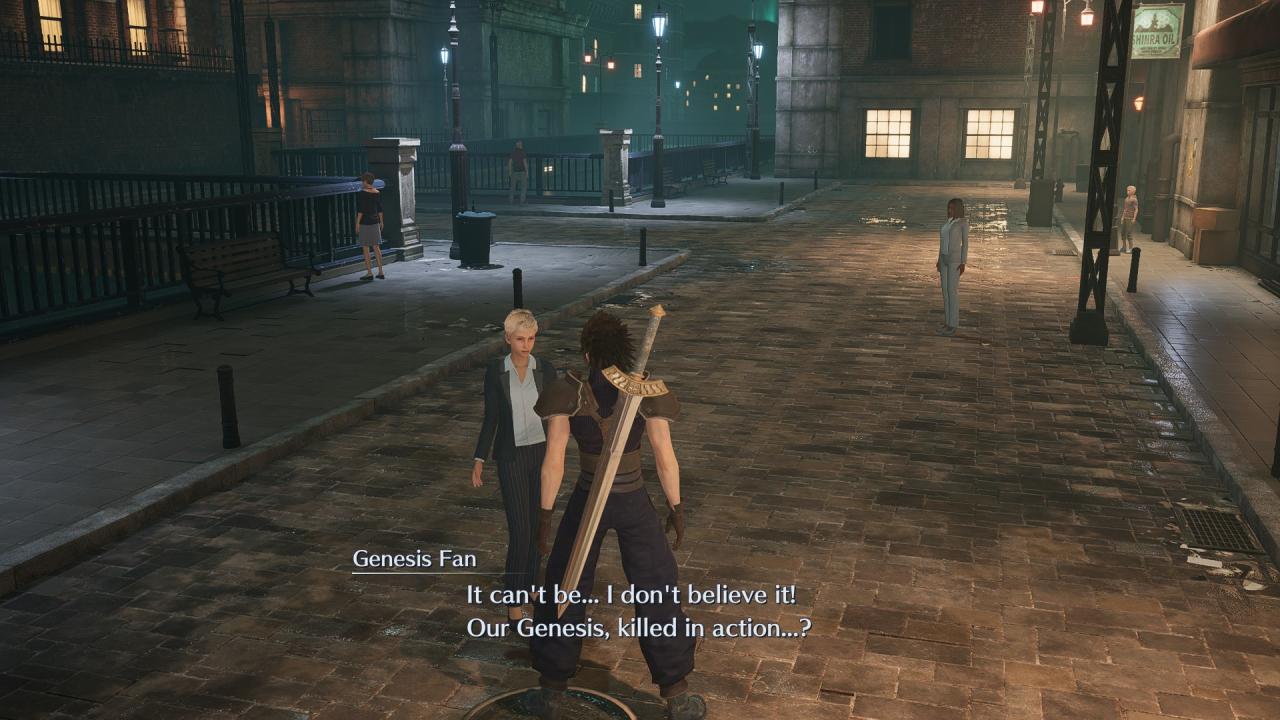 Speak to the Genesis Fan to receive this email. 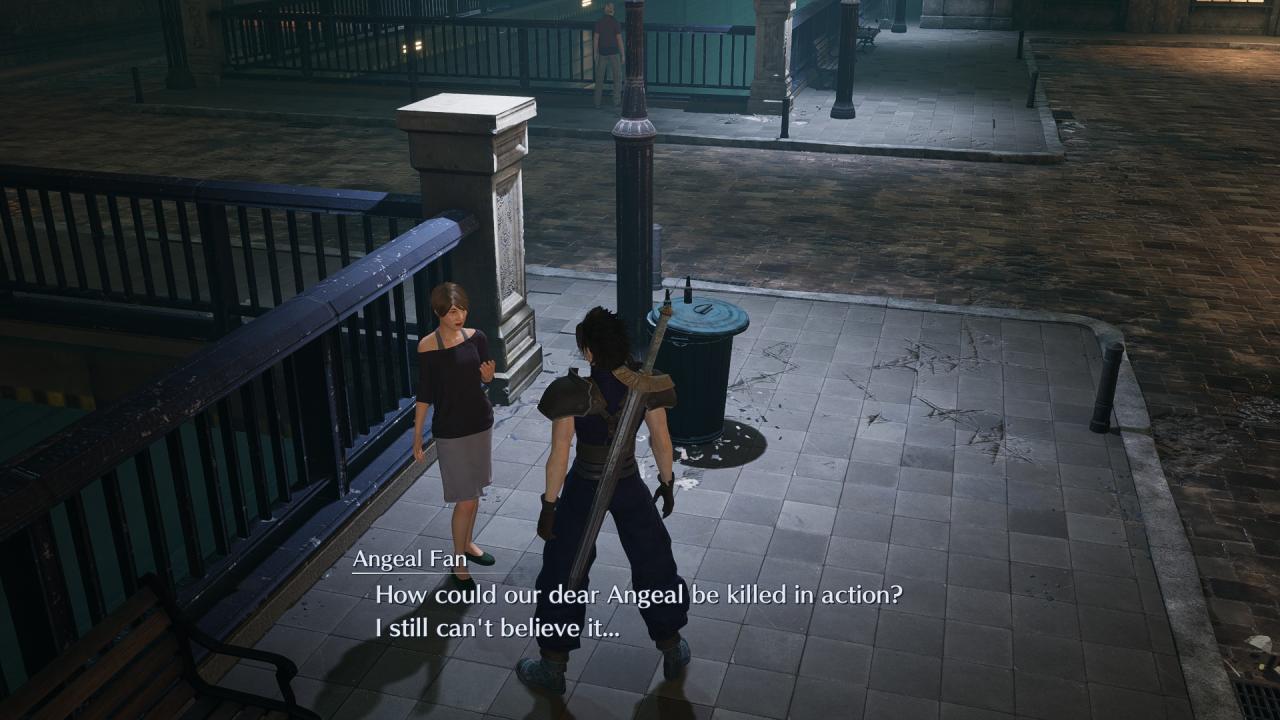 Speak to the Angeal Fan to receive this email.

During the Main Quest

Not available yet.
That’s all we are sharing today in CRISIS CORE –FINAL FANTASY VII– REUNION Collectibles Guide, if you have anything to add, please feel free to leave a comment below, you can also read the original article here, all the credits goes to the original author WhiteExperience