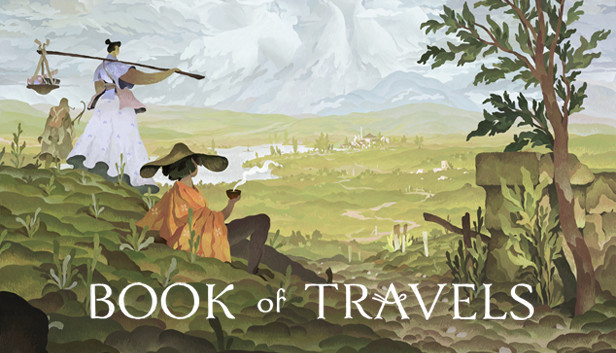 This is a Book of Travels guide to making the game’s survival aspects easier and avoiding attacks. If you want a easier travals in game, this guide will help you out.

Basics of not dying

This section explains some of the relevant gameplay mechanics. Personally, I’ve found the survival aspects minor and have never been close to ‘losing a life petal’, but I’ve seen other (possibly more inexperienced) players struggle with it.

Energy:
You need it to stay conscious, obviously. If there’s nothing left of that red bar in the upper left corner of your screen, you pass out and miss a life petal (see below), so check it once in a while, check it quite often in demanding conditions, and try to keep it up.
You use up a little bit of energy constantly (also while you leave the game idle or in the menu!), more while walking, MUCH more while running, and apparently also more while your clothes are wet or you’re having other debuff cards active.
You gain energy by eating, a little by drinking spring water and a lot by drinking tea, bit by bit while resting, quicker while resting by a fireplace.

Life Petals:
You’ve got up to three, though you may have started with two. If you lose your last one, your character dies – and at least until further notice, this is permanent. You can walk around (slowly) as a ghost, but you can’t really do anything (other than creating a new character).
There are a few ways of regaining life petals.
The most accessible one that you may not have figured out during the beginner’s quest: one of the deer at the Dandelion Temple can heal life petals
The obscure one: on the island of Myrt, there’s a petal-healing tea hidden behind a tree
The social one: you can ask another player/character who might have the Bandage skill to heal you – either by using the most pitiful symbols you can find and hoping they get it (if they do have the Bandage skill, it’s not unlikely) or by asking for help in the discussions on here or in the Discord server’s in-game chat.

– Beginner’s tips: You start out injured, exhausted, and with little food or valuables on you. Take it easy. Don’t run around right away. Check out your surroundings and try to find a nice place to rest. Then see if you can locate wild food or gather a few things to trade, or both.

Attacks:
Can happen in some areas (more on that later). You can avoid a lot of them by walking slowly, relying on your Careful trait if you chose it (see below) and/or watching out and/or pressing TAB to highlight hostile NPCs with red backgrounds on their name tags (unless you’ve got the same bug as me). Technically, you should always be able to flee, though personally I find combat prompts stressful in themselves, and the whole thing might be disorienting if you’re not used to combat games.

I’m going to assume that you want to avoid fighting, also because I don’t know anything about it. Basically, if you hear an alarming sound and see a red circle like this pop up: 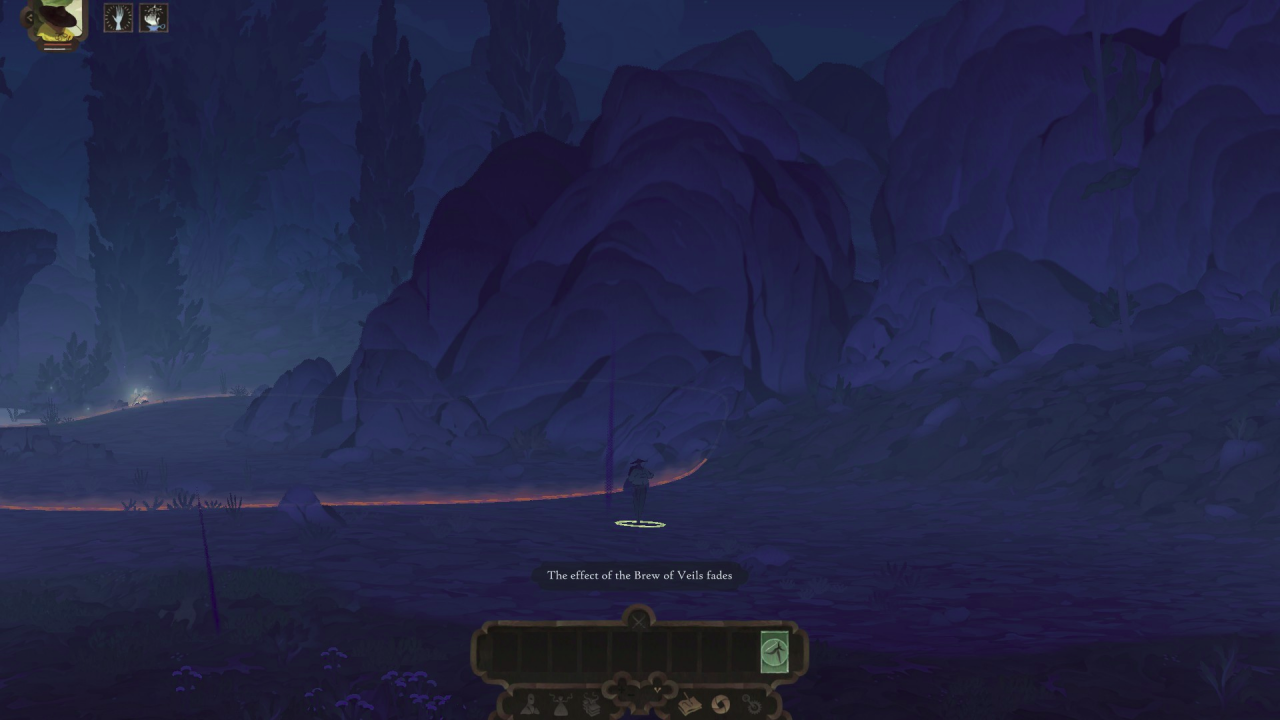 …You can hit the green symbol to flee and get away from combat. I deactivated (“forgot”) my Attack Stance and Attack skills so that Flee (as the only relevant one for me) would be easy to spot.
If you get a… one-sided trade menu pop up, you’re being mugged and you’ve got limited time to decide whether to give some of your items to the NPC. To be honest, I always panicked and manually shut down the game when that happened, but apparently you can refuse to give them anything and then do the Flee thing described above.

Fleeing doesn’t harm your character. It only auto-moves you to a random place within the same general area, makes you need some rest, and gives a temporary debuff that’s irrelevant if you don’t want to fight.

These are traits that you can choose for some of the forms during character creation, if you’d like to plan ahead to make things more relaxed.

Careful: If you choose this trait, you’ll get a notification when you’re getting close to hostile NPCs. Well, at least that’s the goal. Right now the trait is slow to react – it often takes a couple of seconds, which can be crucial seconds, even if you’re walking rather slowly (don’t run into areas that can be dangerous, more on those areas later).
This trait also overreacts and flags some NPCs as hostile that wouldn’t attack you (notably, some of the Wardens that offer training duels).
It takes a bit of experience to figure out which NPCs are actually hostile and you can’t always rely on it, but I’ve still found it very useful.

Venturesome: With this trait, you’ll lose less energy while out walking alone, i.e. it’s especially helpful if you’re going to do solo exploration. Losing less energy means you’ll have to worry less about finding food or other means of keeping that red bar up so you won’t pass out and lose a life petal.

Peaceful: You gain more energy from resting by a fire. I haven’t tried this one, but it would make most sense in combination with the fireplace skill, or if you’re going to play with someone else who has that skill (it’s widely available and rather cheap).

Calm: You gain more energy from eating and drinking. I haven’t tried this one to see how much of a difference it makes, but it’s probably useful enough to choose if it suits your character.

Basically, Goodward and Mosswalker (and Dimmed?) are excellent beginner forms with some of the most helpful traits and a knack for survival skills in addition (which means you’ll get to start out with one and have to use fewer skill points on the ones you can get during gameplay).

These are skills that you can acquire and learn during the game, or in some cases start out with.

Assemble Fireplace: It’s cozy, dries your clothes, gives you energy, and you can share it with others.
Where to get it: possible starting skill for Goodward, Mosswalker, and Dimmed; 24/7 active merchants in Crossings, Bat Saha, several other places

Affinity for Water: Gives you energy while in water. Situational, but there IS a lot of easily accessible water in the game and you have to wade through it to reach certain places. Super metagaming tip: this skill is more rare and much more expensive to “buy”/trade in the game than Assemble Fireplace, in case that helps with deciding which one to take as a starting skill. On the other hand, you’ll still be wet once you get out of the water…
Where to get it: possible starting skill for Goodward, Mosswalker, and Dimmed; I’ve seen it a few times from merchants, at least Retired Adventurer who walks around just East of Crossings on Saturdays

Guiding Spark: Shelter: Honestly haven’t tried this one, it seems more useful to just build your own fireplace and/or shelter. As a roleplay choice, sure, why not.
Where to get it: possible starting skill for Goodward, Mosswalker, and Dimmed; quite a lot of merchants, especially those dealing with mystic and knot items

Fishing: gives you food and therefore energy, and items to trade. No-brainer unless you’re very vegetarian and/or want to make things more difficult for yourself (like me, apparently?)
Where to get it: fish traders; the one that’s most reliably present is the one in Myr

Smoke Cylinder: Now this is only second-hand knowledge, but apparently you surround yourself with smoke so that hostile NPCs won’t notice you, and it lasts until you interact with something. Can’t be used once combat is initiated.
Where to get it: from the notorious Night Traders – bandits that sell stolen goods on Monday (?) nights in the ruins to the West of Charwood Forest (one of the most dangerous places to get to at night, but people on Discord pointed out that you can get there during daytime and then log in again at night..). I haven’t checked it out because my character would find it too immoral 😛 They also say you can find this skill randomly in loot containers, but I’ve never seen it.

Animal ports: let you transform yourself into various animals, last until you do something that the animal wouldn’t do (pick up an item/reagent, talk to someone etc. – you can eat and rest while in animal form). Expensive for newer players, and require a reagent that’s mostly found in dangerous places (tufts of animal hair). Very neat for fast travel though (especially the deer port), and for scouting to find out if an area is currently safe for your human form. CanNOT be used for quick escape as it takes 20 seconds to initiate.
Where to get them: Supposedly common, but I’ve only seen them offered two or three times, by Traveling Knot Binder who travels along major roads.

Meld: you become one with a bush until you click to move. The bush manifests itself, so it can be used anywhere. Funny skill with limited usefulness, as you can’t move while using it and you can’t use it once you’ve been attacked. Good for using the Rest skill to sit down and recover energy in dangerous places though. This one works almost instantly.
Where to get it: Retired Adventurer who walks around just East of Crossings on Saturdays

Brew of Veils: Beware. I’m not sure who it’s supposed to make you invisible to (maybe bandits? someone said only players?), but I’ve been attacked while having it active.

I hope I’ll get around to editing this section more later, when going through all my screenshots etc.

Probably safe, but I haven’t been there much: Char Cape Passage (with one exception that’s rather hard to find), Obo’s Blade Pass, Siriam Fields

Should logically be safe and I’ve never been attacked, though I haven’t been able to confirm what my Careful trait thinks is dangerous: Bat Saha

Possibly unsafe at night, though I’ve roamed the woods a lot and never been attacked: Kuro Orchard

That’s all we are sharing today in Book of Travels Survival Guide for Easier Travals and Avoiding Attacks, if you have anything to add, please feel free to leave a comment below, you can also read the original article here,  all the credits goes to the original author löyly