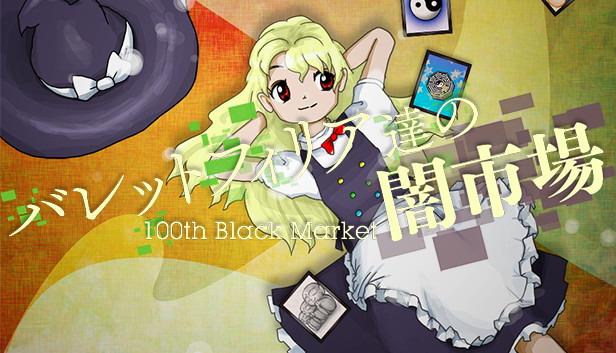 For Black Market of Bulletphilia ~ 100th Black Market players, this guide will show you how to play the game, with some helpful tips and tricks.

The Touhou Project is a long-running series of indie games, currently celebrating its 20-year anniversary, set in modern-day japan in an enclave where forgotten mythological creatures end up when people stop believing in them.

One of the central gameplay/lore themes is the ability to store magic in cards (known as Spell Cards), which is a type of combat magic with a greater focus on looking cool than being efficient.

What’s the plot of this game?

Beats me, I don’t know japanese either. It’s a direct sequel to the 18th game, whose plot revolved around a group of people creating illegal spell cards by damaging the environment and selling them for massive profit, so there’s probably some connection to that.

I just randomly got swept here by the reviews. What is the game actually like?

The game is an arcade shmup / roguelite hybrid. You fight through a couple waves of basic enemies or minibosses, between every wave you can cash in temporary money for upgrades for that run, before finally fighting a boss. Beating a level boss permanently unlocks an upgrade card of your choosing and also permanently makes that stage harder, with the long-term end goal being to unlock every card.

If you have more than one Active Card, pressing this button will cycle through them.

The game takes place over the course of several stages.
Stages consists of several waves of enemies or minibosses. Just surviving for a certain time will clear these waves, but you will want to shoot enemies and graze bullets to earn Gold and Bullet Money.

After every wave, you will enter the Black Market and be able to exchange Bullet Money for cards.

Every stage ends with a random boss fight, out of the 4-6 assigned bosses for that stage. Bosses have two phases, a phase transition is triggered when their health gets low and will clear any bullets on-screen.

To clear the stage, you need to beat the boss. Performance in waves don’t matter.

Every boss has an unique card, which can only be unlocked by beating them (this is on the far left of the choices, and is replaced with a Gold Crystal card after you unlock the unique card). Additionally, each stage has a certain number of cards to unlock, as displayed on the stage select screen – for instance the tutorial has 5 cards to unlock, and the first stage has 21 – and you can also choose to unlock these.

Once a card is unlocked, you can buy it in the stage select’s store. It will be available as random Black Market choices regardless if you own it or not, but owning a card has two benefits: it will have a reduced price when you encounter it in the Black Market, and you can equip it as a starting card.

Every time you unlock a card, that stage’s difficulty will increase permanently. If you want to 100% the game, get ready for some really hard bullet patterns!

Of course, more bullets means more money, so you’ll find grinding gets faster if you can just persevere.

Bullet Money is used to buy cards in the Black Market between stage waves, so for a good run it’s important to play dangerously and touch as many bullets as possible without actually getting killed by them. Make good use of Magic Circle Deployment (press X) so you don’t need to get close to bullets more than necessary.

Gold is used to permanently unlock stuff from the stage select menu.

Bullet money is lost when you lose a run, but Gold is permanent.

Clearing a stage will convert all your remaining Bullet Money into Gold, so if you’re looking to unlock a specific card, you might want to risk skipping upgrades between waves.

You can equip one starting card, which you begin every run with. By default, you will have the Golden Hammer active-use card, but as you unlock more cards you can replace it.

As you clear certain challenges, you will get more starting equipment slots, allowing you to use more than one card.

There is a limit to total card power as well. Card power is shown as a percentage value and the total value of all your equipped cards cannot go past 100%. Again, this value can be increased by clearing certain challenges.

I’ve only played the game for 3 hours and don’t know japanese, so this will not cover every available card.

As a general rule of thumb, there’s three types of cards:

In the Black Market, cards have a number above them, such as “0/5”. This shows how many you have and how many can be stacked. Most cards that only upgrade a stat can be bought repeatedly, as long as you have enough Bullet Money.
(Note: the Purple Crystal card says you can get 999 in total, but it will always end the current Black Market if you pick it)

Also note that you can only get at most 3 cards from any Black Market, regardless of if you can afford further cards.

A delayed attack that turns any bullets it hits into money (split evenly between Gold and Bullet Money). It’s your only way to actually DESTROY bullets, so it can be really useful in boss battles.

Note that you can combine it with Magic Circle Deployment: deploy your magic circle to slow down a large group of bullets, making it easier to aim the hammer, then convert them all to money in one swoop!

Creates an external turret which fires homing projectiles.
Incredibly useful to deal with bosses, and I recommend you buy this as your first card, especially if you’re struggling with making progress.

Makes you fire a piercing laser. Increases your DPS, but you still need to be directly below enemies to hit them….

Increases the size of your Magic Circle while deployed, letting you convert more bullets into money at once.

Patchouli (Girl with a Pentagram)

Increases damage dealt with Magic Circle. Mostly useful against mini-bosses, since regular enemies die quickly from an un-upgraded Magic Circle and it’s very risky getting close enough to a regular boss to deploy your magic circle on them.

A Bunch of Snakes

Your Magic Circle Deployment stops bullets, instead of just slowing them down.

Fires a slow but powerful projectile. Useful to cover a greater area, since you can move quite a distance before the projectile reaches the enemies.

Your Magic Circle has a small chance to destroy bullets rather than slowing them down.

Increases starting lives by 1.
(Lives are shown as small hearts in the bottom right corner of the screen)
Cheaper than the Heart card, but you can only ever have one of these.

Gap (Rift in reality with eyes inside it)

Kappa inside a wallet

When Bullet Money or Gold falls off-screen, they’re collected instead of permanently lost.

Increases the amount of Gold and Bullet Money(?) that drops from enemies.

Gives a random value between 50 and 100 Gold.
Picking this card while you still have cards to unlock from that stage basically means you wasted the run.

That’s all we are sharing today in Black Market of Bulletphilia ~ 100th Black Market Gameplay Basics Guide (Early Card), if you have anything to add, please feel free to leave a comment below, you can also read the original article here, all the credits goes to the original author Yal