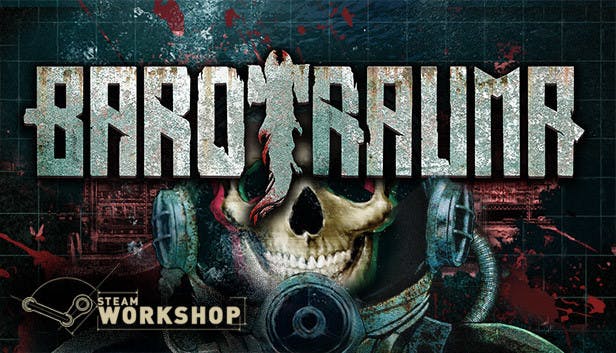 Lots of people died in Barotrauma for not knowing how to treat patient correctly, this is an updated for the recent medical system overhaul. All information is obtained from the game’s code, and is reaffirmed by my extensive medical experience. If you want to how to save life in Barotrauma, you better read this guide.

Afflictions are buffs and debuffs that effect the patient. They are typically shown in the health overlay. These are brief descriptions of them and treatment options. A few afflictions that can only be applied through console commands are not shown. The affliction type correlates with what drugs are used to treat it. Some afflictions are unique and do not have a type.

Internal Damage
Type: Damage
AKA blunt force trauma. A common injury caused by blunt damage, such as falls, or being beaten with a blunt object. Treat with opiates.

Low Oxygen
Many things cause this, such as heavy opiate usage, welding fuel in masks or suits, a lack of oxygen in the sub, or being in water without a mask or suit. Treat with CPR when the patient has oxygen available to them. Avoid treating other afflictions requiring opiates. If you are not a trained medic, treat them with stabilozine, deusizine, or liquid oxygenite if not trained.

Blood Loss
Caused by bleeding, blood loss can be treated with blood packs, saline, or alien blood if necessary, but the blood loss will continue to worsen until all bleeding wounds are treated. Causes weakness.

Stun
Caused by the person disconnecting, being hit with a stun baton or stun gun dart, chloral hydrate. Many attacks and weapons also cause a short stun. The stun will go away on its own (unless the player disconnected, in which they will eventually die of “brain death”), but it can be quickly shortened with hyperactive drugs.

Barotrauma
AKA pressure. Always present when swimming outside the ship with or without a suit. If a suit is not worn the patient will soon die. Barotrauma also occurs inside the ship when there is a major leak and the patient is submerged in the water. Cannot be treated by medication.

Husk Infection
A dangerous infection caused by a husk or infected crawler bite, or an injection of husk eggs. The patient will slowly become a zombie-like creature. Treated with calyxanide, or broad-spectrum antibiotics. Once the patient completely dies from the infection, after several seconds their corpse will be reanimated by the husk parasite. After the husk dies, it will no longer resurrect.

Space Herpes
Caused by having low karma. Not treatable with medication. The afflicted player must perform good tasks to increase their karma. Can cause slowness, inverted controls, and more.

READ:  Barotrauma: How to Deal with Trolls

Drunk
Caused by ingesting ethanol. Not treatable. Too much ethanol will cause alcohol poisoning, leading to suffocation, which should be treated with a constant supply of oxygen-providing drugs until the drunkenness subsides.

Opiate Withdrawal
Caused when an opiate addiction forms and is not treated. The withdrawal can be treated with opiates, but naloxone should instead be used to get rid of the addiction. Can kill if left untreated.

Opiate Overdose
Caused by ingesting large amounts of opiates. Oxygen loss will also occur in an overdose. If the overdose becomes lethal, immediately administer naloxone, and prepare to treat their oxygen loss as well.

Radiation Sickness
Being exposed to a reactor explosion causes this. The affliction will constantly cause burns all over the body, eventually causing death. Can be temporarily treated with opiates or bandages, and antirad will cure the affliction.

Morbusine Poisoning
A deadly toxin that will kill the patient unless cured with the antidote.

Sufforin Poisoning
A deadly toxin that will kill the patient unless cured with the antidote.

Cyanide Poisoning
A deadly toxin that will kill the patient unless cured with the antidote. Slowest of the other two poisons.

Deliriumine Poisoning
A non-lethal toxin that causes psychosis. Cured with the antidote.

Paralysis
Caused by the green cells in the thalamus. Will slowly slow the patient until they go unconscious until cured. Cured with anaparalyzant.

Slow Metabolism
Lengthens other effects such as vigor. Caused by tonic liquid.

Husk Infection Resistance
Caused by antibiotics, reduces the chance of a husk infection.

Vigor
While affecting the patient, their damage will be halved. Caused by anabolic steroids.

This section will go over every drug in detail. Including the crafting materials for them, their usage, and more.

Example
Treats: Damage (5-10|60-120) The affliction(s) or affliction type(s) the drug treats, as well as the minimum and maximum amount of the affliction that is treated per second, depending on medical skill, as well as the min/max of the total amount the drug will treat. In this example, the drug treats 5 damage per second if you’re unskilled, and 10/s if skilled. However the drug lasts 12 seconds (see below), so the total amount of damage it treats is 60 to 120.
Causes: Damage (8-2) Afflictions that the drug will cause, the minimum is higher because a lower medical skill typically will cause more damage than if you are skilled. If the maximum is zero, it means the drug will not cause the affliction if the skill check passes.
Length: 12 How long the effect of the drug will last in seconds.
Uses: 2-4 The min and max amount of uses the drug has, depending on medical skill.
Recipe: Cheese Materials to make the drug.

READ:  Barotrauma How to Fix Downloaded Submarine Not Appearing in Submarine List

Patient is Not Moving

The patient is not moving, and it is unclear if they are unconscious, dead, or stunned. Observe the following image.

Patient is Not Breathing

The patient is unconscious and not breathing, slowly nearing death. They may or may not have other injuries.

The patient has a husk infection. This is apparent because they may have a tendril hanging out of their mouth, or the health headset or overlay has told you so.

Other Protocols
READ:  Barotrauma: How to Deal with Trolls 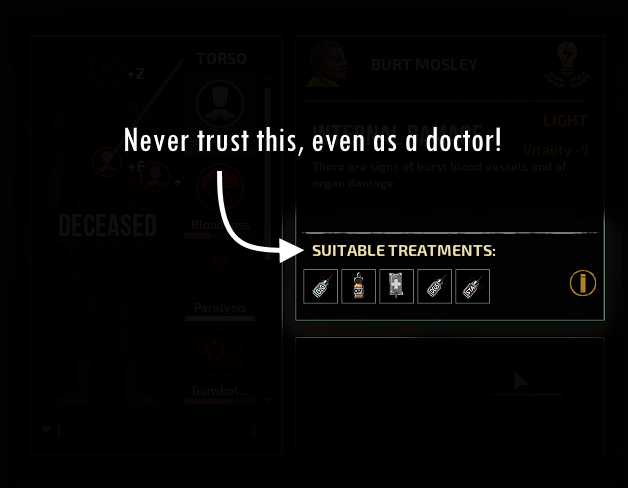 That’s all we are sharing now in Barotrauma The General Crewmate’s Medical Guide, hope this helped you out, if there are more you want to add, please leave a comment below, and we’ll see you next time.
Credit to SonoFelice