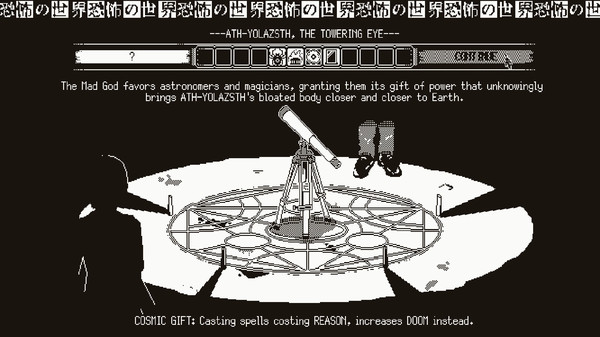 World of Horror, a “1-bit horror game” that enters Steam Early Access tomorrow, blends nods to Ito and Lovecraft with the look of a 1980s HyperCard game. Here is a A list of the achievements in World of Horror, including tips on how to get them.

Have 30 Cigarettes in your inventory at once.

This one is pretty easy. Start an Easy difficulty game as Haru (the Yakuza guy), and go to the shop. Simply keep rerolling stock/going into and out of the shop until you can buy two more units of Cigarettes, then “use” all three in your inventory (since you start with one).

Purify 2 locations in one playthrough.

With a Holy Candle in your inventory, certain random events can call for using it to purify a location. You only need one Holy Candle; it is not used up when purifying a location. The places I found to purify were in the Mansion during the Vigil case, and one random location while investigating the School.

This unlocks the Monument location, where you can trade STAMINA to lower DOOM. Thanks to General Charm for the tip

Defeat an enemy with the Baseball Bat.

This achievement was bugged in the launch version, but it’s now working properly. Simply get the Baseball Bat item from the Apartment Stalker, then bludgeon someone to death with it.

Find the hole in the painting.

Enter the Overgrown Factory while wearing a Ritual Robe and Kurakosa Mask.

Shop for items ten times in one run.

Another easy one. Simply enter, leave and re-enter the shop ten times in one playthrough.

Unlocks the Dog Treats item, which when held lowers all shop prices by 1 FND

Investigate 20 locations with a Compass equipped.

Another fairly easy one. Buy a Compass as early in the playthrough as possible and just have it equipped while you play your game, and you’ll unlock this.

READ:  WORLD OF HORROR: How to Save the Game?

Unlocks the Map item, which has a chance to lower DOOM while exploring, and is also usable in certain events

Take a hostage as Miku while wearing the Tokyo outfit.

I haven’t gotten this one yet, but I assume that you simply need to intimidate a person into following you while playing as Miku in her Tokyo outfit.

Defeat the Mad Janitor as Aiko.

Start a game as Aiko, and if the Mermaid case isn’t in your list of cases, restart until it is. Simply play the case normally, and when you defeat him the achievement is yours.

Prepare an attack during combat, but do not attack in that round.

Unlocks the Pocket Knife, which allows you to escape from combat once with no DOOM penalty.

Seems to be bugged at the moment, as even when you select your follower and click the “kill” button nothing happens.

Meet your _other_ neighbor.

I actually just unlocked this while typing this very guide. Simply leave the WOH window unattended for some time, then click it back into focus.

Have 4 followers at once.

Very easy achievement to get. Go to the Schoolyard and simply ask or threaten people to follow you.

Unlocks the Seal of Savvesh spell

Sacrifice a follower with the Ritual Dagger equipped.

I got the achievement after doing the School Scissors case only a couple of times.

Unlocks the Seal of Bramel, another spell.

Before choosing a new case, go to the Watch TV room and dial 56709 (a lyric from a Junko Ohashi song “Telephone”) to unlock this achievement.

This unlocks the spell Thread of Fate, which costs 4 REASON but instantly kills a human enemy. Thanks to General Charm for the info on this one!

Have a follower die in combat.

When you have a follower, there is an option in Support Actions to have your follower attempt to distract the enemy. This action has a chance to kill the follower, so simply do that until your follower dies.

Find a Ghost enemy, and use the bow-clap prayer thing to exorcise them. This one is random and while it’s not hard, it’s kind of a pain to do. I found a Ghost enemy while investigating the School; there is an even where you enter a bathroom and can choose to leave, or close a stall door. Close the door and you’ll be attacked by the Toilet Ghost.

This unlocks Pancakes, which I haven’t been able to find.

Research five spells in one playthrough.

Go to the School Library and simply research five spells.

Unlocks the Army Knife, a PER weapon.

Beat the game as the first character, Kirie Minami.

Beat the game as the second character, Aiko Takahashi.

Beat the game as the third character, Haru.

Beat the game as the third character, Mizuki Hamasaki.

Beat the game as the fifth character, Kouji Tagawa.

Beat the game as the sixth character.

Beat the game as the seventh character.

Roll a 1 during an event stat check.

Trust me – this is going to happen eventually.

Unlocks the Hermit, a follower.

Defeat an Old God with over 90% DOOM.

Unlocks the Eldritch Amulet, an item.

Burn down the school.

At the end of the Mermaid case, in Support Actions there is an option to topple a lamp. This will net you this achievement.

Unlocks the Leather outfit for Haru.

When you’re shopping, click that cute dog’s nose and he’ll bork at you, unlocking the achievement.

Beat the game once.

Die due to REASON.

Die due to STAMINA loss.

Beat a game while using the World of Horror backstory.

Beat the game while using the Medical History backstory.

Beat the game while using the Hunted By The Cult backstory.

Beat the game while using the Inheritance backstory.

Beat the game while using the Frail backstory.

Buy, then return an expensive drug.

Beat the game on Hard difficulty.

Meet and defeat SOMETHING EVIL.