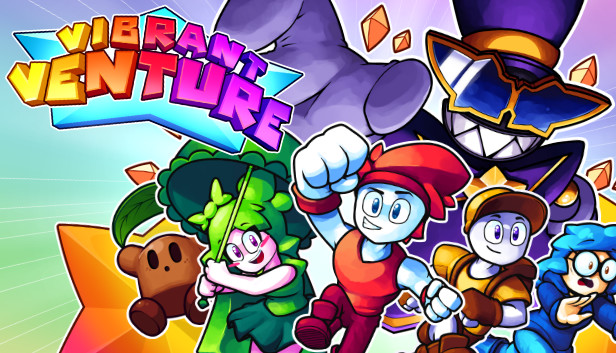 If you play Vibrant Venture and looking for a guide to know more about Madeline, this article will provide everything you need, let’s check it out.

Madeline has a total of 2 phases, 1 where she’s above ground and 1 where she’s below ground.
Each of these phases needs a minimum of 2 cycles to complete the level.
Every cycle consists of 2 attacks, once those 2 attacks have been performed you’ll be able to hit her with either the Log or one of the boulders. 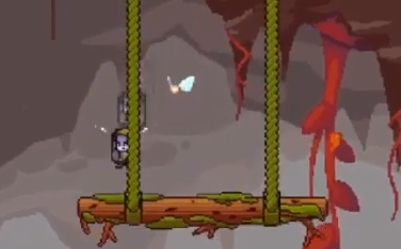 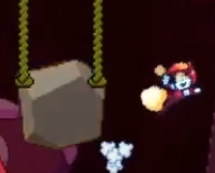 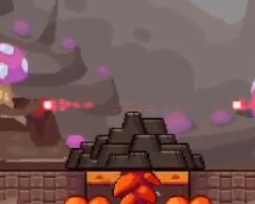 To hit Madeline in the first phase you’ll need to lure her onto one of the 2 rocks blocking the airstream. Once she jumps onto it and breaks it you’ll be able to fly up to the platforms above with Pistachio. Once you’re up there you’ll need to change into Banana and ground pound one of the 2 sides of the log to hit her.

In her second phase you’ll have to hit her 3 times instead of 2, but don’t worry since she spawns in 2 per cycle.
The rest of the boss fight is pretty straightforward, just dodge her attacks and hit her with the boulders.

Here is a video that demonstrates the entire fight for if you’re still having issuse with defeating her.

Madeline has a total of 3 different attacks, 2 of which have variants in phase 2. 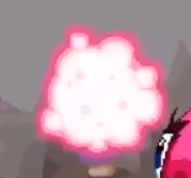 This is 1 of the 2 attacks that can be used during the first cycle.
To indicate that this attack is being charged Madeline’s front eye will start turning red, once this happens you have about a second and a half to dodge it before it hits you. This attack is pretty slow and easy to dodge when you’re standing far away from Madeline. If you’re standing in front of her tho you’ll get hit instantly so you’d better keep your distance.
During the second phase this attack will change, in her first cycle of the second phase she’ll fire 2 spores and in the second cycle, she’ll fire three of them. these are pretty much the same as the first one just a bit harder to dodge.Shroom’s

This is the other attack that is used during the first cycle.
To indicate that this attack is being charged Madeline’s top eye will start turning red, the attack itself probably won’t hit you, but when it hits the ground it’ll transform into a mushroom that spit’s projectiles in 3 different set directions. This can be quite frustrating so you’d better defeat it as soon as possible.
During phase 2 this attack will multiply just like the spores, in the first cycle there will be 2 and in the second there will be 3.Laser 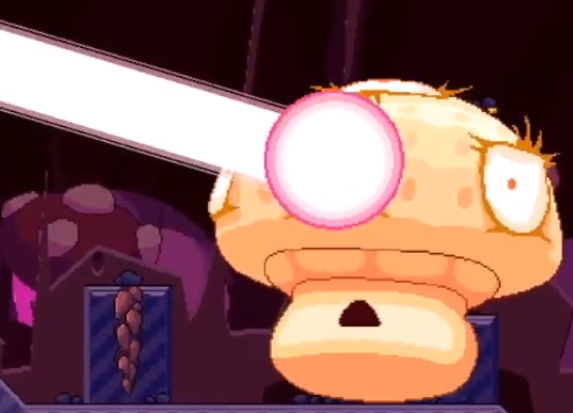 Madeline will start using this attack during the second cycle.
This is the fastest and most difficult to dodge attack. When this attack is being charged a laser will be pointed at you and after a second an enormous laser will be shot at you. This attack is by far the hardest attack to dodge because it requires a fast reaction time.
This attack luckily doesn’t vary during the 2 phases so once you get used to it you’ll be able to deal with it no problem.

This is my favorite section of the guide, Before I start explaining the tricks I’ll let you watch the fastest run from the date this guide was made, performed by none other than me.

I’ll explain the techniques in the same order that they were used in the video.

Getting onto the platform early

This is probably the most important trick in the entire level, you may or may not have noticed, but gliding up to the platform with Pistachio’s umbrella isn’t that fast. Because of this we had to find a way to get up there as soon as possible.

The way you perform it is to get up on this little ledge and longjump off of it with Azura, once you hit the highest point of the longjump you need to use your dash, aim it upwards and when it starts to slow down switch to cardinal and use your double jump to land safely.

More tips will be added soon

This is the sole reason why running this boss can be a pain and here is why. I made an easy to follow scheme that explains the RNG in an easy way.

Here is a link to the document if you’re interested: RNG scheme[docs.google.com]

The document goes into this more specifically but it basically shows that perfect RNG and worst RNG can result in a 7.6 second difference which can be awful for full game runs specifically, but this also means that you’re going to be resetting a lot to get a good BOSS run

That’s all we are sharing today in Vibrant Venture Complete Madeline guide, if there are anything you want to add please feel free to leave a comment below and we’ll see you soon.