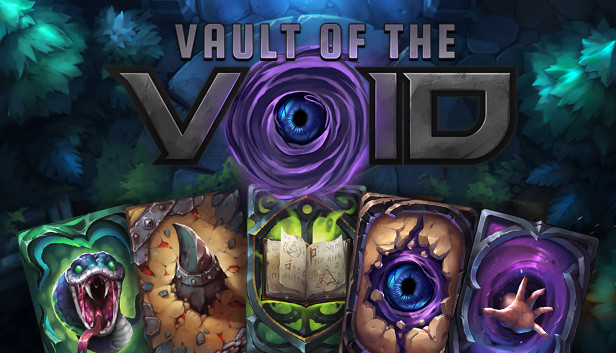 So I played Slay the Neogrift Trainverse. What’s different here? A lot, actually. If you are a Vault of the Void beginners, this guide will show you some useful tips, let’s check it out.

Everything below this point assumes you’ve at least played through the game’s introduction or seen some gameplay of it online – it won’t be explaining the very basic-est basics of the controls or such.

The exact details of how this mode will end up are still up in the air, so tips aren’t too extensive here.

How Void Points will exactly work is still up in the air, so there won’t be too much in this guide on that yet.
Void Points

You get these for playing, and use them to unlock card backs and Challenge Coins. The system might not be too fancy, but the card backs just might be!

Card Backs are what you’d expect – show up in the Vault to show the Void your style. Ah yes, spoilers, the Vault belongs to a Void, by the way.

Challenge Coins are cute little variations on runs you can purchase with Void Points to unlock playing them whenever you want – these will start you off with different cards, artifacts and conditions. Some’ll be a breeze, some’ll be punishingly difficult, and some’ll just be plain weird. And there’s achievements for beating them, if you’re into that sort of thing! You know who you are. I’ve seen your Steam profile.

Each time you beat a run with a certain class, you get to pick one of 10 class commons to “master.” When playing on Normal or Hard difficulty, you can choose one of these 10 cards to start out with each run – a great chance to jump start your deck’s synergy, cover for a weakness, or just help push your deck towards being whatever you’re in the mood for today.

Once you’ve mastered all 10 cards for a class, you’ll also unlock a reroll for the starting booster – which IS usable on Impossible difficulty. This means you’ll get to replace one card from your starting booster with another random one of the same rarity – so replacing your uncommon will get another uncommon in its place, guaranteed. Oh, and any boosters you pick up as end-of-floor rewards too. You won’t always pick another one, but a chance to turn a card you wouldn’t use into one you would is always great!

It’s worth trying to get a few different kinds of cards with your first mastery chances to be ready to adapt to starting boosters – you may find yourself lacking good attacks or good block and want to plug up a gap, so once you’ve got the card(s) that build on your favorite strengths, it’s worth getting some contingency plans in place.

Oh, and if it’s your first run with a class, don’t worry, you can always pick a health potion instead of a mastered card, and health potions are pretty great. If that health potion ends up giving you an excuse to take down an Elite you otherwise would’ve shied away from, it may well end up being a much better deal than starting out with an extra common card!

The three difficulty options form a straightforward continuum – from Normal to Hard and from Hard to Impossible, you can expect enemies to have more health, hit harder, and for their passives to be stronger. An enemy that does 2 damage when you attack them on Normal might do 3 on Hard and 4 on Impossible.

Impossible isn’t as impossible as it sounds, but it’s definitely not for the faint of heart and not every run will give you a path to victory. Just get used to not getting as many Perfect combats and having to play it a little… or a lot… safer than you normally would.

He’s a rogue, you know ’em, you love ’em. He stabs things, he makes them bleed, he’s been getting bonuses for backstabs since before you were born. Your game plan’s always aggressive – pile up the Bleed stacks, or trigger even more extra attacks via Combo, and watch things die before they get a chance to overpower you. Your starting defensive game isn’t great, but you have access to a unique class feature that lets you upgrade and customize a card to be extra-powerful, and then trigger it 4 times by playing it once!

Where the Hidden’s a violent assault, the Daughter is an insidious takeover – you’ll be gaining Corruption constantly, whether gradually accumulating it from Purging cards, or rapidly gaining it from Soultithe – setting yourself up to take damage next turn in the process. And the turn after that, and after that…

The Daughter’s strongest tools will use her Corruption to deal ever-rising damage, but she’ll have a harder time killing enemies early on, needing to use her solid access to debuffs and powerful Block cards to survive until she powers up. But once she does, she’ll hit harder and more consistently than almost anyone else – a major feature of the class is a lot of ways to both thin your deck (Sift, which removes cards from your draw pile, ensuring you’ll be drawing the things you most want) and get cards back from discard (Recur, which puts a card from your discard pile back into your hand, letting you play your most powerful cards over and over in a single turn).

You’ll have a lot to manage with a two-stage game plan, and a lot of choices – you can ensure power comes more quickly, but at a cost of even more incoming damage to have to deal with. You can also just let it trickle, but enemies tend to be powering up too, and you’ll need a lot of defensive tools to keep yourself safe as you wear down your enemies with ever-growing dark magic… Helping all of this along is her starting artifact allows you to freely move Void Stones between your cards at any time, helping her delicate game-plan adapt to ever-changing threats.

Or maybe you just want to beat them over the head! The same self-damaging Soultithe that can get you Corruption more quickly can also be used to power up her expensive, big attacks to hit an extra time with Deathstrike. You’ll still be building up Corruption on the side to hit hard later, but in the process you might be able to pick off a defensively weak but highly damaging enemy right out of the gate – but you may find yourself being your *own* most damaging enemy in the process.

Vault of the Void is a game where you’re often playing a turn ahead – you know everything but your draws for the next turn (and if you’re keeping some cards left over or have little left in your deck, even that might be known). The informally dubbed “Time Monk” takes it a step further – you’re often playing for the next turn more than the current one. That’s when all your big hits will go off at once – this turn’s card plays are next turn’s big block infusion. You don’t need to apply Vulnerable before you attack – just before your attacks actually hit.

Helping all of this along is the basic mechanic of Zen. Play three of the same card type (usually meaning an Attack or Ability – good for you if you have 3 Buffs in hand at once!) and for the rest of the turn every card costs 1 less Energy, as well as triggering various card’s Zen-specific bonus effects. This changes how you view a lot of cheap neutral cards – what was a cantrip before is now a complete freebie – and is also a second level of encouragement to plan out your turns down to a science (well, the Enlightened himself would probably prefer it called an art-form).

Rounding all of this out is the simple Foresight mechanic – making a card still in your draw pile cost 0. As with Zen’s cost reduction, this fundamentally changes how you view expensive cards, especially Buffs. Basic tenants of the genre like “you want your big important Buff in hand early” are up in the air once the Enlightened gets his hands on them. In a sense, any individual turn you play isn’t ever just responsible for that turn. The future is by-and-large an open book. Decisions constantly ripple into future turns, offering more and more options to stack more and more impact into the further future.

That’s all we are sharing today in Vault of the Void Basic Gameplay Tips For Beginners, if there are anything you want to add please feel free to leave a comment below and we’ll see you soon.