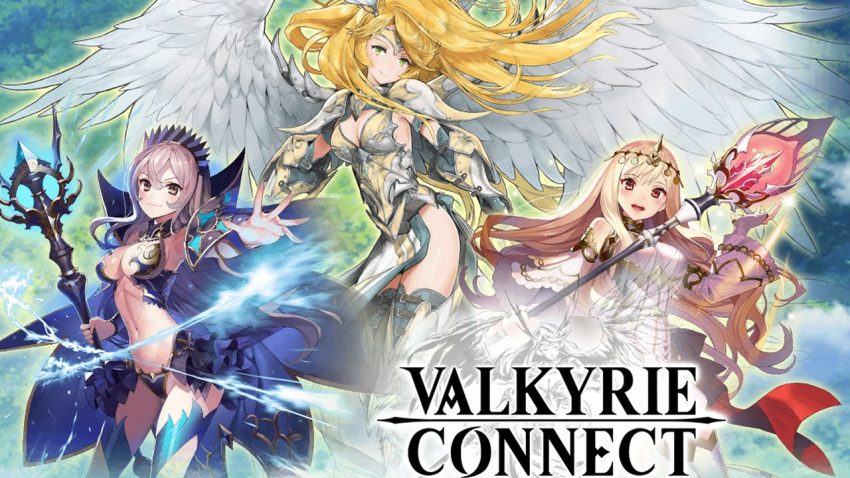 VALKYRIE CONNECT is a Japanese RPG set in a world that’s basically an anime version of Norse mythology.  here are some tips for new players.

When you first start out, there is a lot to learn.

The game has 4 currencies, one of which is variable.

Mana is used to level your Heroes, Summon basic gear, and is spent upgrading items.

Rubies are another real world money equivalent, used to alter the buffs on Artifacts, and spent in the Ruby Trader for unique gear

Summon Coins are earned by doing summons, are named after that summon, and disappear once that summon is no longer available.

All heroes come in 3 Classes, and 3 values
The categories:

Heroes have another stat limiting their growth: Orb level, shown by the frame around their portrait. Orb level also limits how much gear they can equip

Gear matters. Orb your heroes. Finish Main Quest so you CAN orb your heroes
Some heroes can move past Purple Frame, this requires summoning them multiple times to get potions specific to that hero. There are generic potions that can be used on any hero, but as of this writing they are extremely rare, perhaps not available enough to have used on any hero.

Some heroes have access to something called Awakening.
This requires items from various Connect Battles, and from Key Quests from 3 heroes.
Awakening gives that hero a strong passive percentile based boost to their stats, and a strong passive skill.
All Awakened heroes are of some use, though many such as Valkyrie Skuld or Cleric Litany are of less use than others. Valkyrie Skuld maintains some use as a tank (Giving up to a 15% HP boost to all Aesir) Cleric Litany as DPS for some Connect Battles (though usually being outperformed by such as Thunder God Thor, she gives multi-hit light damage for fight such as Fafnir)
NOTE: The bonuses from the % stat boosts make Valkyrie Skuld useful for a long time, despite being a 1 star hero. It is my understanding that this % boost applies to all gear equipped (If I am wrong, please cite source) though obviously higher star level heroes would have a stat advantage simply by being a higher base star level.
UnAwakened heroes do Non-Elemental damage for their Basic Attack
Awakened heroes do Elemental damage based on their Awakening (IE Thunder God Thor does Light damage, Queen Hel does Dark)

GEAR. MATTERS.
This is one of the bigger tips.
READ:  VALKYRIE CONNECT: How to Fix Game Not Starting

All gear comes in 3 types, and 3 values.

Each turn you each hero either performs a basic attack, or uses the skills on their Equipment, starting at the top of the list, then moving down a step each turn. Turn 5 they move back to the top of the list. The stats on all equipped Equipment are cumulative

Accessories are passive bonus. Their stats are fully cumulative. Their passive bonuses are cumulative, but cap at +50%. IE Bangle of Defense and Guard Dog Ring both offer a bonus to DEF, 25% and 30% respectively. Equipping both does not give you a 55% bonus to DEF, only a 50%.

Artifacts are crafted with items earned from Raids, and give passive bonuses like Accessories. Artifact bonuses stack with, but are separate from Accessory or Equipment bonuses, thus an Artifact can increase your DEF in addition to the 50% cap mentioned above
NOTE: If I am wrong about this, please state the source, I may be wrong, but to my knowledge, all different types of bonus (such as Equipment vs Accessory vs Artifact) stack past that cap, but within each type of bonus, there is a 50% cap?

Most 1 star gear is used to level your 2 and 3 star gear.

Most 2 star gear is used until you have 3 star gear that does the same thing, then sold to buy gear from the Blacksmith Trader (usually for Reforge items)

3 star gear is the strongest gear you can get

NOTE 2:
Most 2 star gear becomes useless fairly quickly (especially if you have access to Video Summon, and thus more ready access to 3 star gear)
Druid Cloak is one to hold onto for a long time, it’s HP Up effect is a version of healing, that sidesteps the negative effect Brand.
Brand converts most healing into damage, negating any bonus from trying to heal.
HP Up does not “heal” but the way it applies the bonus HP keeps some of it after the effect fades, giving a form of healing that, while weaker than straight up healing, does not trigger Brand’s effect.

There are 3 kinds of summons.
READ:  VALKYRIE CONNECT: How to Reroll and Easily Account Switch

Mana Summon gives you 1 star heroes and 1-2 star gear
Mana Summon is far from worthless though, as it gives you material for the Soul Trader, things to sell for the Blacksmith trader, and material to level your gear. Once your heroes have reached the level cap, Mana Summon is where most of your mana will go.

All other summons cost Diamonds
What Other Summons are available, and what they offer changes with time.
They will have names such as Yggdra Summon
Most offer a discount on the first 1-3 tries at each 10x summon.
Most offer increased chances at specific heroes on the 3rd, 4th, or 5th summon attempt
Some offer a guaranteed hero out of a specified set of 4-8 on the 3rd, 4th, or 5th summon attempt. IE they offer around 8 heroes, you pick 1-4 (out of a specified set) and on the 3rd-5th try at a 10x summon, you are guaranteed one of the heroes you picked.
If you plan to stay FTP? Save your Diamonds for those Guaranteed summon events.
Many offer coins you earn by doing the summon, and will have another page in the Trader where you can exchange your coins for Heroes or Gear. Getting Specified heroes from the Trader usually takes 50k+ Diamonds. Save your Diamonds for either those, or a Guaranteed summon

Lucky Summons are like Other summons, but NEVER offer a Guarantee, and usually have low odds for their Specified heroes. However, “Lucky” heroes will never be available anywhere else, and so if you want one of them, save up your Diamonds until you can do enough summons for them that you can exchange the Lucky coins in the Trader for that hero.

Once the Main Quest is finished, Connect Battles (known as CBs) are one of the biggest parts of the game.

You will fight a variety of foes, under a variety of limitations, for a variety of rewards.
Element. Race. Gender. Resistances. Buffs. ATK or MATK damage. Whether you are flying or grounded. Every stat is involved in one fight or another.

For example, the Mermaid Marmalade will be fought under an Eclipse Field (reducing healing, and removing the ability to buff your party, unless they Resist Eclipse) and will render most Female heroes incapable of acting. Marmalade is also guarded by two crystals, who are best taken down by Earth and Dark type damage.

Meanwhile the Mad Fafnir is fought under a Gravity Field (slowing the action rate of all who do not Resist Gravity) and is covered by a shield that requires hitting it 10-20 times before Fafnir himself can be hurt, possibly requiring you to bring heroes that are not what you might think, in order to help bring the field down (Sun God Amaterasu does not Resist Gravity, but her SP weapons are multi-hit, making her more effective than most other options)

All of each CB’s stats are listed in game, and solving the puzzle of building your team is a large part of the gameplay

READ:  VALKYRIE CONNECT: How to Fix Game Not Starting

Limited come in a variety of difficulties, their only common trait being that they are only available for a limited time.

When looking at a CB, the Multi rewards have a red square with 3 silouettes on it (iconic for most multiplayer icons) Host rewards are the ones that do not have that symbol.
Whoever hosts a CB gets the host rewards, people who join a CB without hosting do not get those.
Both parties get Multi rewards, but only if the CB is set to Multi at launch (IE if you run a CB in Solo mode, you only get the Host rewards)
When joining someone else’s Multi CB, you are given the option to spend stamina to get the Host rewards, or to join without spending stamina, in which case you get only the Multi rewards.

NOTE: If you die during a CB, you usually get some Connect Tokens to trade at the Connect Trader. Getting some of the Bangles (Strength, Wisdom, Defense, Faith) go a long way to boosting your stats. Having a Bangle that boosts your offensive stat (Bangle of Faith or Wisdom) and one that protects you against the boss’s attacks (Bangle of Defense or Faith) is a good starting point for team building for 7-8 star CBs

Raids are similar to CBs, the big difference being that where CBs are designed for 1-3 players. Raids are designed for up to 50 players. As such, you will be the only team shown during a Raid. Rewards are based on your DPS rank within the raid, and whether or not you hosted.
Hosts are given extra rewards, but cost 3x what it costs to simply join.

The basic artifacts of each element can be equipped by any class or race, the others have limits listed in game.

Arena and Grand Arena are available to every player, and are the primary source of Diamonds for FTP players.
Status Effects (such as Paralyze/Petrify/Sleep/Charm) and DPS seem to be the rules for higher level Arena play. The strongest hero in the game becomes a hurt to your team if he is Charmed, but you cannot win if you do not take out more of their team than they do yours.
Draws go to the defender.

Guild Battles are a large source of Guild Tokens, used in Awakening heroes, and spent in the Guild Trader.
Guild Battles require you to be in a guild, and for the upper leadership of the guild to begin one.
You will be fighting through a fortress built by their Guild Master, and can only act so often.
Some times you will be fighting a player ‘s Arena team, some times you will simply be pounding on a wall, that is only vulnerable to some types of damage (ATK, Purple Frame, SPD, etc…)
Some guilds are active in Guild Battles. Some are not.

Guilds are also a source of more Stamina, as you can “help” up to 10 guild mates each day for a boost to stamina (for you) and guild tokens (for them)