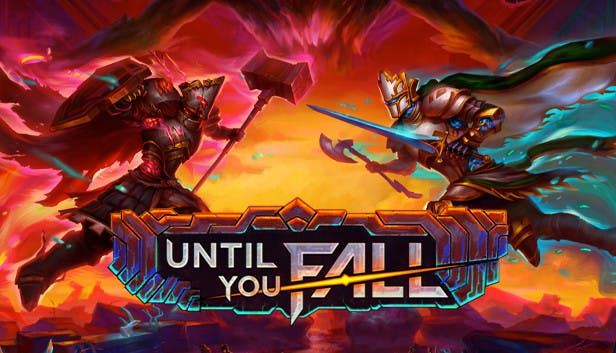 For Until You Fall players, if you are hunting for achievements, this complete achievement guide will help you out and get those difficult achievements for you.

Most of the achievements are fairly straightforward and easy, although there are quite a few that are maddening, and quite difficult to those of us new at this game. This guide is designed to mostly help out with those tricky ones.

These are achievements you will get over the course of your play through.

Rude Awakening
Defeat your first enemy
Relatively easy if you have two hands. If you don’t, hold the controller with your wrist stumps. If you don’t have arms….how did you make it this far.

Welcome to Rokar
Finish the tutorial
Self explanatory.

On the Wings of the Knight
Launch an defeated opponent 10 meters into the air
You will naturally achieve this over your first few runs.

Guard Breaker
Inflict 1000 guard breaks
A guard break is that orange broken shield that appears over an enemy when you drain all their guard.

Wounded Pride
Defeat the first Boss encounter of the Shattered Woods
Should be easy enough with the right traits.

Super-est
In a run, upgrade a super to level IV
You’d have to grab the enchance super after clearing a level. You should be able to pull this off before getting to the second boss

Buntmaster
Successfully reflect 100 ranged attacks
The third boss and spellweavers are the only ones who shoot projectiles.

Tricked Out
In a run, have 6 or more Traits equipped to a single weapon
You should get this after having a weapon upgraded to level VII or IX

Masterwork
Upgrade a weapon to level X
Self explanatory.

Cognitive Overload
In a run, equip 10 or more traits
This will come naturally as you upgrade you weapons and add more trait slots.

Horror Vanquished
Defeat the final Boss encounter of the Shattered Woods
Self explanatory, although there are three phases to this fight.

A Fine Collection
Acquire 12 unique weapons
Will be automatically unlocked after defeating the final boss.

Quick on the Draw
Complete a Critical Strike Combo of 6 or longer
A critical strike is the orange lines that appear after you break an enemies guard. Grabbing a Shard of Guile (The pointy yellow things) will add to your combo.

I recommend going for Relentless Reclaimer first, as it unlocks the other one retroactively.

Fat Stacks of Aether
Earn 10,000 Aether total
Will come naturally as you are going for the Rokari Retirement Fund.

Unempower-er
Defeat 100 Empowered Enemies of any kind
Self explanatory.

Achievements that are difficult, but not impossible.

Kneon Knightmare
Complete the Shattered Woods Campaign on Nightmare
If you can beat the game on Relentless, you can do it on Nightmare. If you’re struggling on a level though, you can just save and quit. When you reenter the game, it will send you back to the start of the level, allowing you to redo it without worrying about dying. You can abuse the hell out of this on the final boss too.

Sword God
Complete the Shattered Woods Campaign on Nightmare without ever using a Shard of Resolve
I recommend going for both this and Kneon Knightmare at the same time. After finishing it, you can then move on to:

Ain’t Got Time to Heal
Clear the Shattered Woods Campaign on Challenging or higher without ever using a Shard of Vitality
This will feel like a breeze after completing Nightmare mode. Going for Shards of Resolve and Super Enchancers will make this far, far easier, especially with your upgraded weapons.

These are the ones that will take the longest to accomplish, and are generally the hardest in the game.

NOTE: PLEASE DO THE ACHIEVEMENTS IN THIS EXACT ORDER, IT WILL SAVE YOU TIME AND YOUR SANITY.

Rokari Retirement Fund
Have 50,000 Aether in the bank
(Note, this is NOT total Aether, only Aether that you have gained and have not spend on upgrades.)

Ooooh boy, this one requires math, skills and you having two arms still at this point.

This one is really about maximizing your aether/time ratio. You’ll want to be as fast as possible to get the most aether as possible. Sure, you can do 16 sucessful straight runs on nightmare to get 50k. But you’d need to grind out 5 hours of some insanely difficult fights. There are potentially much faster ways to gain aether

The higher level weapons really do make it a much easier affair to earn Aether though
Farming through the first two tiers, (boss included) on normal is probably your best time/aether ratio

Third Tier is the biggest slog versus the most time and energy consuming enemies
And you need to beat the last boss to get the bonus 1k
So until your weapons are level 10 or if you’re training full runs anyway, you make better money per time not doing T3
The increased aether from upping the difficulty is not worth it

On Challenging, I did a run through of the first 2 tiers, grabbing as many aether shards as I could while upgrading just my supers. Using the Level X Knight Blooded Crest along with the Level X Ritual dagger, I achieved a time of 14 minutes 32 seconds and got 1664 aether. Roughly speaking thats around 115 aether a minute, or 6900 an hour. Unfortunately, that would take you roughly 7.2 hours of constant grinding to get to 50k.

Thanks to Ketha’al on the Until You Fall discord, I have times to directly compare and contrast with eachother (Note, these are with Level X weapons)

A 0.5 increase in exchange for a massive jump in difficulty. Fun.

But there’s definitely ways to do it faster.

Remember, these numbers only matter if you can beat the final boss quickly, efficiently, and not die in t3 or get bogged down by the enemies.

Assuming you use a level X Duelist Edge along with a level X Knight Blooded Crest, you can use it to positively melt most enemies guards in 2 or 3 hits. It’s also generally not worth it to pick up the aether shards, as it is far more effective to grab something that makes your weapons more powerful. You might take a +100 or +300 if you come across one after a boss or whatever, but generally it’s better money to take the powerups that allow you to be more aggressive/faster.

As a hypothesis, assuming it’s taking 9 minutes or so for second boss clear, and you’re clearing 1300 Aether or so, you’d be pulling about 145 ÆPM
And without having to worry about dying or fighting the last boss. And spending a bunch of time in T3 and then losing without clearing
I myself, am not that person, with my runthrough, I managed to clear it in 13 minutes, with 1312 aether netting me a pitful 100 ÆPM

I asked a few other people in the discord too, this is Rokari Chicken’s stance. Someone who had gone from 100k to over 400k aether in two weeks, and is also on the Until You Fall Discord

“Keth has already outlined the most important bits, but I’ll just add that once you’ve calculated your projected ÆPM, you can use that to quickly judge if it’s worth it to take an aether grab over traits.

One big thing I’ll say is that the a trait rolled in tier 1 could save you minutes on a run, but the same trait rolled in tier 3 might only net you seconds. Combine that with aether offerings of ~20 in tier one vs 250 grabs in tier 3, and you can see what I’m getting at here.
I personally take a lot of aether grabs when grinding specifically for aether, because as you go through the levels, ROI increases for aether grabs and decreases for traits. Obviously it’s a case by case thing and will vary according to playstyle, but generally a 250 grab is better than a 30sec time save while 30seconds is worth more than 50 aether, etc.”

Honestly? If you want 50k Aether as fast as possible, become a speedrunner, that’s the true way to get it. You won’t save much time here, an hour or two at most. It’s really best to just slog away at this, as this one will *technically* take the longest to do if you’re upgrading as you go.

Of course this leads perfectly into

Pinnacle of Perfection
Upgrade 12 unique weapons to Level X
Please. PLEASE get the last achievement before going for this one. After you get these, the rest of the achievements should be a breeze, as they are all achievements based around using specific weapons.

Titan’s Grip
Clear the Shattered Woods on Challenging or higher using any combination of Heartsplitter, Vestal’s Wrath, or Mistcutter
Self explanatory.

Spellweaver-in-Training
Clear the Shattered Woods on Challenging or higher using both the Ritual Dagger and Spellsword’s Charm
Self explanatory.

Katastrophy
Clear the Shattered Woods on Challenging or higher using both Gemini Stranded and Gemini Esper
Self explanatory.

Fundamentalist
Clear the Shattered Woods on Challenging or higher using both the Engraved Arming Sword and Rokari Keenblade.
Self explanatory.

Monk of Rokar
Clear the Shattered Woods using both the Knight Blooded Crest and Spellsword’s Charm on any difficulty
I recommend saving this one for last, as you can’t block, only dodge. At this point, you should have complete mastery of the game. Play on Relaxed, you’ve earned a break after all of this.

That’s all we are sharing today in Until You Fall 100% Achievement Guide, if you have anything to add, please feel free to leave a comment below, and we’ll see you soon.
Credit to Zelaird Gervik

1 thought on “Until You Fall 100% Achievement Guide”