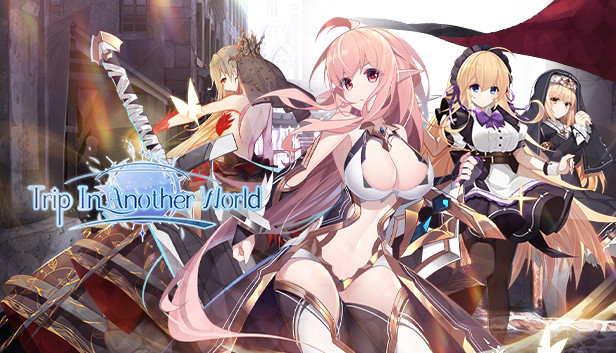 For starters of Trip In Another World , this is a general guide for things that the game doesn’t do a great job of explaining by itself.

Note: it is known as “Lord of the Other World” on Mobile.
The recent steam release has re-titled it as “Trip in Another World”

Server 4 was opened with the steam release and is available to Steam and Mobile users.
Server 1, 2, and 3 are older servers accessible to Mobile users only.
I do not believe you can use a steam account on the mobile version or vice versa.

The cross server chat includes all 4 servers.
All in game chat has language translation available.

How to build a team

A team has 1 Commander unit and 2 other units.

Because the commander is less likely to be attacked or hit by status effects, you usually want to put a DPS unit as your commander and use your 2 other units to support them.

But it really depends on what units and skills you got.

What troop to use
Each unit on your team can be assigned one type of troops.

Infantry: ok movespeed, low attack, high health, ok defence, low destruction.
Use on your other 2 units if you have healing on your team. healing is more effective on troops with higher health.

Cavalry: fast movespeed, ok attack, ok defence, ok health, low destruction.
Use on your other 2 units if they still deal decent damage, or you just want to move fast.

Siege: slow movespeed, ok attack, low defence, ok health, high destruction
Could use siege on debuffers. but they are so slow that maybe its better not to use them at all.

The academy is used to research different technologies that improve your resource gathering, troops, and trade.

Just like any other building, it needs to be upgraded along with your city hall.
When you are upgrading the academy, you cannot research anything so it is best to use building speedups to instantly upgrade your Academy, so that you can always be researching.

What to research – Economic

You should rush the research speed and building speed technologies. It is the best long term strategy.

You can max out some of the earlier researches since they don’t take very long. But I wouldn’t research anything else more than what is required to reach the “Advanced Research” – last research speed technology.

It’s not worth researching technologies that increase resource gathering or production, since you can make a second account and use it to send resources to yourself if you ever run low.

What to research – Trade

You should rush to “Carriage” – the last caravan load technology. Increase that to an amount where you are comfortable reaching the trade limit every day.

You could also consider staying with 1 trade route forever, and levelling technologies related to the price of those 2 items. I do a trade route between Alonia and Amrittes, trading their city exclusive items. There might be better trade routes, but is it really worth worrying about?

What to research – Military

You should rush higher tiers of troops. You can max some of the earlier technologies since they are quick, but otherwise just try to get to tier 4 archers fast. Tier 5 archers takes a crazy long amount of time, so tier 4 will be the baseline for most players.

Hopefully they both take roughly the same amount of time, but sometimes the step 4 building requires other buildings to be upgraded too.

As long as you are using both building queues to advance closer to the next city hall upgrade at all times, then you are doing good.

And speedup the Academy upgrades if you can. Since you can’t upgrade the Academy and research at the time.

Each fight consists of a pre-battle phase, then 8 rounds of combat.

In the pre-battle phase, many “Strategy” type skills apply their effects here. These could be buffs, debuffs, or status effects that aren’t active until later rounds.

The fight ends when either commander loses all their troops. If both commanders still have troops after 8 rounds, an impasse occurs.

During each round, the turn order for all units (your team and enemy team) is determined by each units individual speed.
During a units turn, it makes a normal attack, then rolls the probability for any Chase/Tactical skills to activate. Then it goes to the next fastest unit to have their turn. Once all units have their turn, proceed to the next round.

You can view the battle log to see the breakdown of a fight.
Once you build a Library, you can use it to simulate battles.

The damage an enemy deals to you is largely based on their troop numbers. So lowering the number of enemy troops is the best way to protect yourself.

But it also helps to have a skill that gives you an advantage early on. There are many strong units or skills that give you the upper hand for the first 3 rounds, such as Pomon, Rhea, Saintess Shin SP, Dream Eater, Set Ambush, Hesitate or Undercurrent. If you have one of these, you can stay relatively safe in the first 3 rounds, while lowering the enemy troops considerably with your attacks.

This means the effect of the skill is roughly multiplied for every 200 in the specified stat.

“Damage Coefficient X”
This describes how much damage you can expect a skill to do. A damage coefficient of 1.00 is the damage of your normal attack.

Strategy Skills (blue)
Skills that activate before a battle starts or during a specific round if that’s what the skill description says. These skills cannot be prevented using status effects.

Tactical skills (purple)
These skills have a probability of occurring every round when the unit has their turn.

Chase skills
These skills only have a chance to activate after the unit does their normal attack.

1 round preparation
Found on some Tactical skills. When the skill activates, it does not apply its effect until the start of the units next turn.

Counterattack
A unit with counterattack will strike back at any enemy that hits them with a normal attack.
Example: Pomon skill Spirit Flame

“Aid”
A unit with aid will redirect any attacks on allied troops to itself.
Example: Rhea skill Star Shield

“Combo attack”
Some units and skills let a unit do their normal attack twice in one round. Chase skills can also activate on both normal attacks.
Example: Mia skill Divine Punishment

Shield
Blocks the first instance of damage a unit receives.

“Burning” or “Spell damage”
skills with this text damage the enemy before they take their turn.

“Gain a strong attack… with real damage”
This text means after any normal attack or damage dealt by a skill, the unit will deal a fixed amount of damage based only on the units troop numbers and actual attack the unit has during a battle (see last section for how that is determined).
Skills that deal damage multiple times, will also activate the fixed damage every hit.
Example: Patra skill Ghost Bone.

“Normal attacks will also Splash”
The damage from your normal attack will also be dealt as a percentage to the other 2 enemy units. The percentage that is dealt, depends on the damage coefficient of the Splash skill.
Eg: a unit with a 0.60 damage coefficient splash will deal 60% of their normal attack damage directly to the other 2 enemies, completely ignoring their defence.
For example: 4 star Slider skill Red Blade

Taunt
Unit must target the taunter with its normal attack. Does not apply if the unit is also in chaos

But what stats does my unit have during a battle

The troop stats are increased by many factors such as boosts from armour, technology, and titles before being added to the units stats.

You can check a units real stats by equipping a skill that increases their stats by a flat amount, and looking at the battle log. Since the battle log will tell you the amount that the stat was increased to.

You got to the end of the guide, so now you get a nice picture. It shows you roughly how the attack of a unit is determined during a battle. 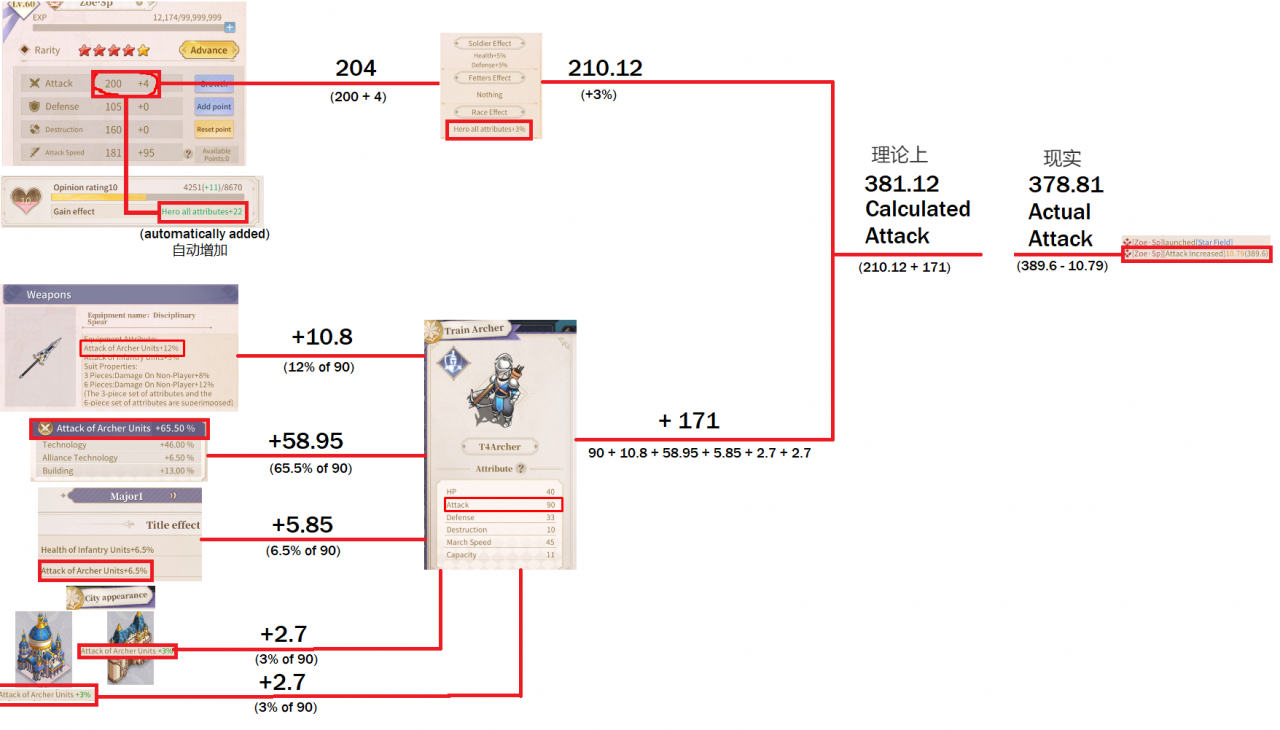 That’s all we are sharing today in Trip In Another World General Basic Guide For Beginners, if you have anything to add, please feel free to leave a comment below, you can also read the original article here, all the credits goes to the original author Lofthouse