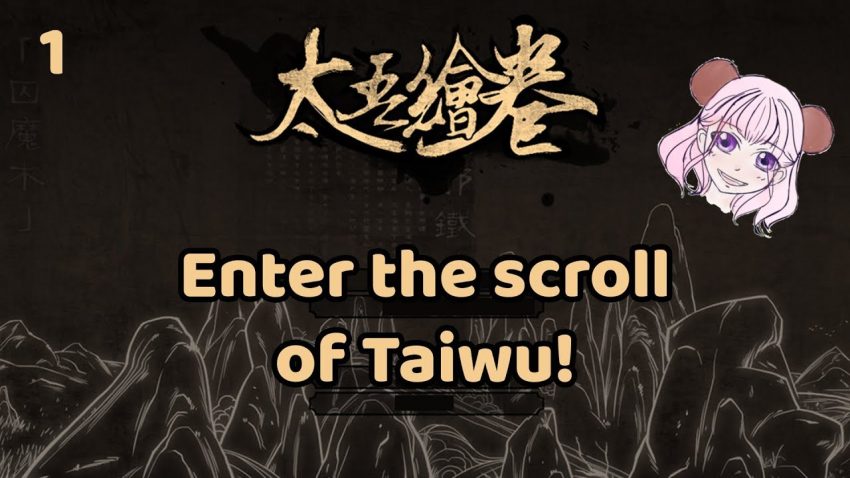 Discussion about the underlying mechanics of attack skills.

This guide will mainly focus on discussing various aspects related to weapon skills.

The Costs, Stats, Attack distribution, Hidden Stats, and Damage Formula will be discussed. 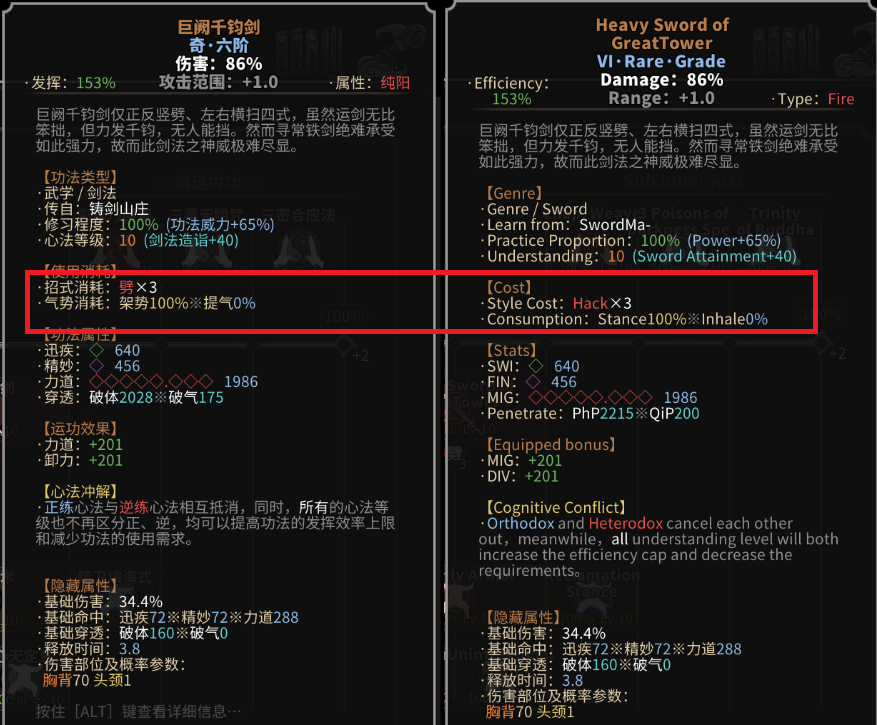 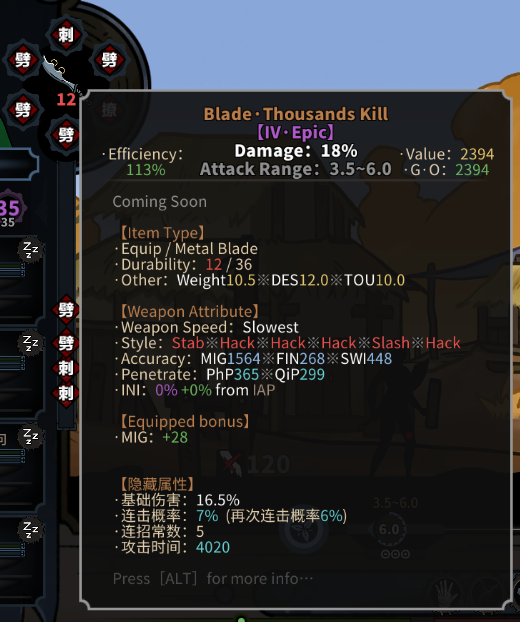 In order to cast an attack skill, there are 2 costs involved.

First is the style cost. Styles are generated when landing basic attacks from the main character or from attacks done by followers. These styles are then accumulate in a queue on the left, to a max of 9 then the oldest one will be lost when a new style is generated.

The styles from the main character will be generated depending on the equipped weapon. In the example shown, the first attack will be a stab, then the second third and fourth will be hacks etc.
And in order to cast the listed skill, 3 Hacks will be consume from the queue. 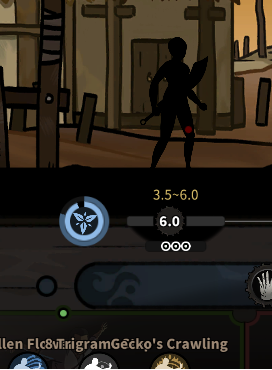 Next is the inhale/stance cost. Inhale and stance are represented by the 2 blue circles. Inhale is the inner one and stance the outer. Inhale will fill up first, then stance will fill up. Attack and defense skills consumes those and cannot be cast if the circles are not full.

When an attacking skill is cast in combat, a window will pop up which shows the three attacking
categories and the three corresponding defenses.

So long as the attacking type is greater than the defense, that attack will connect and deal a portion of the dmg.

However you will notice that there are actually 4 attacks; the first 3 attacks corresponds to those attacking types list above, the 4th attack is actually the sum of the three which will be discussed below. 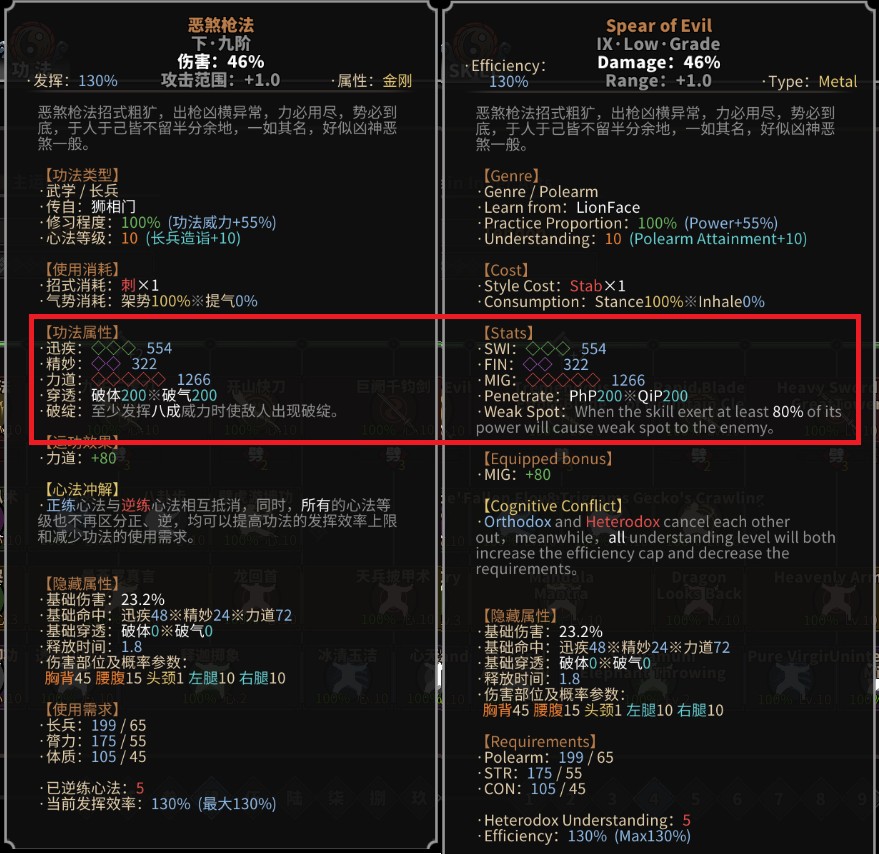 Take this skill for example.
The [Stats] section lists the values for the corresponding attack categories SWI – Swiftness, FIN – Finesse, MIG – Might. The diamonds/rhombus on the other hand correspond to what i dubbed as the attack distribution of the skill. Each of those diamonds represents 10% of skill power when the skill hits.

In our example we have 3 diamonds for SWI, this means that if SWI hits the opponent (SWI > EVA)
30% of the skill dmg will hit the opponent.

Suppose that our SWI and MIG connects, but our FIN missed (FIN < PAR). In the attack animation, we would see our first attack hits, our second missed, and our third and fourth attack hits the enemy.

Furthermore those percentages also determine what type of wound gets generated.
10-50% causes light injury
60-90% causes heavy injury
and 100% causes critical injury
These will factor into the damage calculation that i will discuss later.

In conclusion, the attack distribution determines the power of the fourth attack. And dodging at least one attack will affect the final damage greatly since the fourth attack is the sum of the previous three. 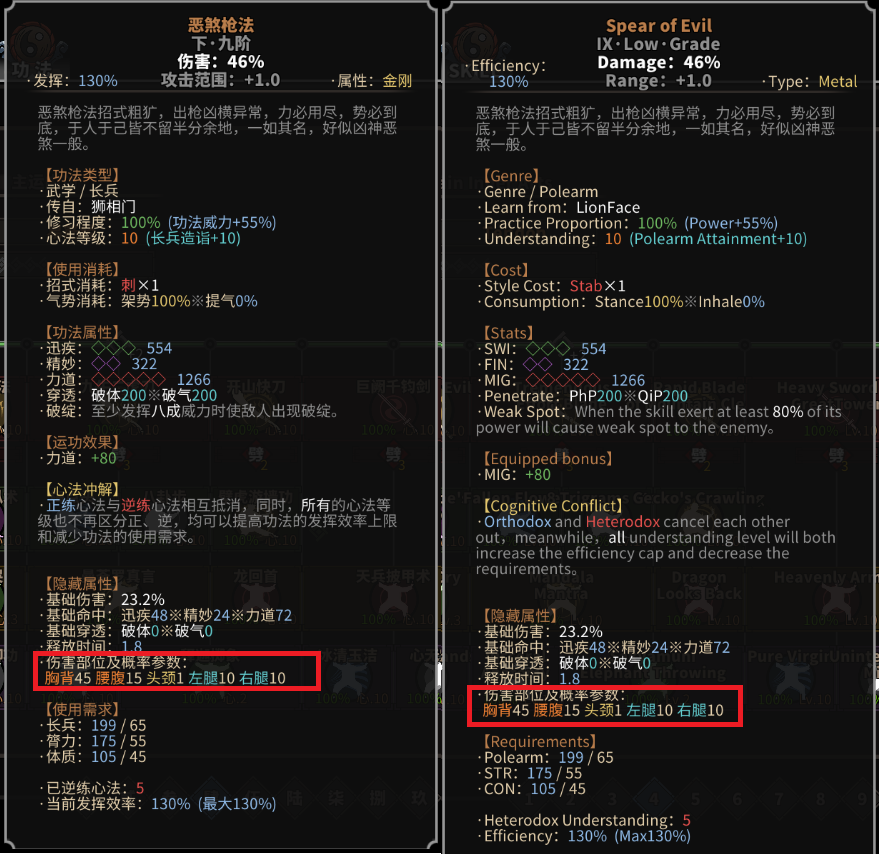 Another important yet hidden aspect of the game is the body part hit ratio of skills.
I have installed a mod: 更多信息 or ShowMeMore
which lists these hidden information in the skill tool tip.
READ:  The Scroll Of Taiwu: English Mods Collection

Each skill has its own body part hit ratio, and will determine how likely each body part will get hit by the skill upon activation. Head is always listed as 1, and the numbers don’t all add up to 100.

From what i understand, the damage percentage of the skill will cause some injury % wound on a body part which in turn becomes EXI – External Injury or INI – Internal Injury number. Hence it is advisable to have skills hit the same body part if you are looking to deal damage.

Furthermore you can have one skill which is used to create weak points for a body part, and another skill that is used to deal dmg to that same body part. This is because those weak points and acupoints causes the body part to receive more dmg.

In addition to that, some skill has a gimmick where they only hit a certain body part, like the tier/grade 9 BloodHou Finger skill. This skill only targets the head. Likewise, there are certain stunts (or what i liked to translate as special technique) that have special interactions with certain body parts. Hence it is advisable to know which body part the skill can target.

The other hidden number for attack skill is the casting speed of the skill. This is the number right above the red box shown in the image. Again, each skill has its own casting speed. Some skills like XuanNu music skills cast fairly slowly (i think around 5.5) whereas others skills casts fairly quickly. This is just another number to keep in mind, especially if enemies are fast enough to maneuver out of range for slow casting skills.

Final Damage is calculated based on the following categories listed below (numbers and/or formula might be subject to balance changes, use this a rough guide on how certain things interact with one another)
READ:  The Scroll Of Taiwu: English Mods Collection

For a normal attack if the might,finesse,or swiftness reached 2x of enemy’s diversion,parry,or evasion, it causes heavy injury

G: Damage reduction by armor
There is some max DR value and also relationship between DES and TOU of the armor versus the weapon.