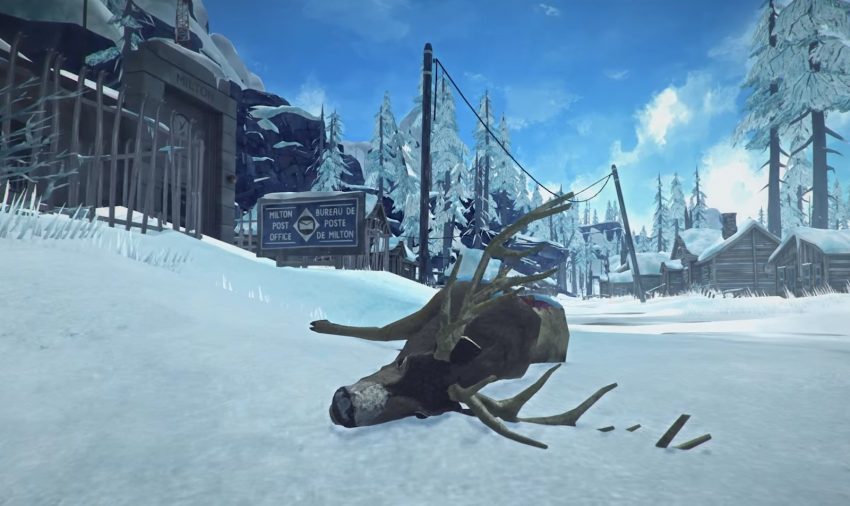 Mostly this is a spoilers filled description of getting through Chapter 3. You do not need this guide, or any guide, to get through. However, it is written as “in order” as possible, in case you are at point and questioning things. It also points out that you do not need to carry the kitchen sink around with you, but provides more specifics should you want them.

Before jumping into spoilers … let’s summarize where I finished:

I finished with all but Aftermath at 100% on the main quests. I’m not sure what it would have taken to get this one to 100%, so decided to move on. I only searched out one side quest (bunker), the rest happened along the way.

This was a nice chapter.

Good length (perhaps could have been longer – but not after the wait we have had between chapters). And no goofy BEAR SPEAR scenes.

Having played through it, I now know what to carry and what not to carry, and won’t be slogging 100+ pounds of gear along with me. My next play through will likely be half the overall time.

I think the development company, Hinterland, decided to use some full motion capture from an earlier an acquisition causing a delay in this release. They also used full voice acting, instead of the reading option.

It felt more professional and polished. I felt more immersed in the game play. If it were my company, I would be quite proud of this release.

Side note: there’s no reason you cannot accomplish this Chapter with zero help. If you read further, you will spoil nice reveals that are best experienced in the game.

You start with a Molly having rescued you. She quickly leads you to a barn, and leaves you to the wolves. Later you’ll find out that she has done this before. And … she is hunting some of those escaped prisoners and shooting them with arrows. After sending you to her barn, you will no longer interact with her in person. I never found a way back in to the main level of her house … but I might have rushed out of the valley too early. I used the basement once or twice later on to warm up.

The priest sends me to the airplane to look for survivors (but mostly for ID cards and insulin for the one person in the group that needs it). It is convoluted to get there, and yes, you have to come in from the east, circle north and west around the airplane, and come back down south east again to search the wreckage.

However, there is a mid-span way out I might have missed while circling north to the plane. I used this way to get out. You will be carrying a survivor. It leads to a route down the mountain and some ruined houses. I might have missed this doing the Church Artifact quest … not sure.

Molly will be ringing you up during as you reach an abandoned shack on your return path. The message sounded ominous, and I decided to avoid stopping at her place on my way back.

Side note: this place is a nice stopping point to warm up your patient. Next will be the barn. Then next, the town hall with the priest.

If you did the side quest for the Church Artifact, you are going to get a bunny hat. I love it; it’s the best warmth to be had for your head. I’ll write a poem about it later.

Side note: However, you never fight rabbits in this game. You never find a rabbit skin. As such, you may want to plan early about killing a rabbit (you’ll have plenty of bullets) or trapping a rabbit. That way, on the way out, you can use that to repair your hat.

Having returned with your patient and talked to all of the survivors, you talk to the priest; and he sets you about the tasks of rescuing 3 more survivors; and stocking the larders with calories.
Side note: the stocking of supplies is like playing survival mode, and I enjoyed it. However, I combined it with the quest for the 3 missing people.

I even established a home outside of the town hall. It is the one with the truck in the driveway. You can walk onto the porch just where the snow piles up. I store my meat outside there, in the snow. The house’s layout is exactly like the one on Jackrabbit Island on the Coastal Highway map – a common home site for survival mode.

Side note: use a flare gun when you are in the “circle” of where the survivor is, and they will shoot one off in return. I forgot this two out of 3 times. :/

After getting to the first person, and I don’t know if this is a random event for THE FIRST PERSON RESCUED … or for the person at that rescue site. But there is a bear roaming nearby. I went and killed the bear first. If you are attacked, you will survive, and can finish him off. I am “assuming” you have the rifle, at this point.

After that, carrying this person back is all about avoiding the wolves. You cannot do so all the time. I think I averaged 1 wolf pack attack per person returned. And just the 1 bear encounter. But I did reload several times. When the wolves sound, drop the person and get your pistol out. They “know” when you are aiming, and will run goofy paths to avoid your aim, be patient, let them get close if you need. And feel free to shoot them on their retreat (whether your first shot got them, or they bit you).

Side note: the wolves do not seem to care or fear flares or the flare gun, or the burning spot on the floor. I used my pistol exclusively with them.

After my first rescue, I returned to the bear and made a supply trip out of it for the stocking quest.
I have no notes for you for the side quests. The only one I went out of my way for was the first of Joplin’s Bunkers. The one that appeared on my map, was far north, and near another site (a tall tale?), but I could carry everything from both … so had to return.

Side note: That is … I was CARRYING TOO MUCH.

Carrying too much: you never have to feed your patients; you sometimes get a chance to give them water. Most of the time I could not sprint in my first play through. This was a ridiculous load to be carrying. Supply up, leave most of your tools home. You are always going to be finding stuff. Don’t bring cloth (do bring bandages). Or extra clothes. You can find those. Of tools, I used handsaws for slaughtering. Never used a hatchet while out and about. A knife “maybe” once in a fight … but honestly, I beat them upside the head with my gun. Obviously you need a crowbar, and enough supplies for 1 – 2 fires, at most. Besides the final cave, I used matches when I REALLY needed some light, not a lantern.

I do not know if the STORM will appear until after you have turned in food quest, or after the last survivor quest, or both. As such, I left about 6 oz or lighter fluid out of my stocking order, and turned them in both at the same time as I returned the last survivor. The storm hits, it lasts like 2 – 3 – 4 days. Repair your gear.

Snow storm is done. You do a silly quest up to the radio tower, where there is a bunch of stuff to pick up. Head back to your house, repair your gear (which you should have done during the snow storm), and then to the coal mine.

Side note: there is no short cut to the coal mine; follow the priest’s map. Anyway, there will be a group of 4 wolves up there. Boring. You will be fully loaded for this trip and not need anything from them.

Coal mine. I will be curious, at the end of the day, how many people will vote this even a positive part of the story. Anyway, you go in alone. You look around, eventually you find a small floor section covered with some wooded planks, and a cave in starts.

Side note: you wake up with sprains and pains. And no bed roll. They removed it from your inventory. I tried many, many times to be sneaky and leave it in a safe place … but they really require you to lose this item. I eventually gave it up … having left it on the floor. I wonder if they would have given it back to me after I find the exit … had I kept it in my inventory? I doubt it.

Anyway, the next part is about an elevator, fuses, bolt cutters.

Side note: Like an idiot, I carried around 140 lbs of stuff, afraid they were going to “rock slide” my stuff away again. Mistake. Once you find the elevator … leave most of your stuff on the floor outside of this. It will truly make the rest of the effort go SOOO much quicker.

Side note: you need 3 good fuses, not two. Go searching.

Eventually, you will have two, but not three. You’ll find a fence that needs bolt cutters.

Side note: these are hidden down some dark, never lit passageway you probably haven’t felt the need to search yet. Grab them, and get your 3rd fuse.

The funny part is, it was never clear to me where the 3rd fuse went. I found it obviously, but cannot remember to tell you where. The first two are within sight of the elevator. The 3rd, I don’t remember, but not quite within sight. Anyway, you grab your stuff, take the elevator, and then you can see the exit.