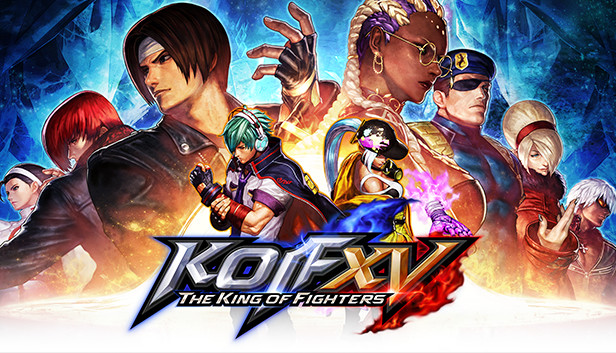 For THE KING OF FIGHTERS XV players, this guide is for people that are struggling against blocking opponents and don’t know what to do.

This guide is meant for people who can’t throw their opponents with 100% accuracy.

Why grabs are important?

Grabs are important because your opponent can keep blocking your attacks all day long and getting your moves blocked all the time is bad because they do nothing; once the opponent see the weakness behind your failed attempted attacks he’ll beat the pulp out of you.

Once you have successfully thrown your opponent, he/she will take the risk to stop blocking or else they’ll get grabbed and thrown again, grab is important because it’ll keep your enemy off balance so you can get in with combos and make them mash buttons and eventually get hit and fall for your special moves, advance cancels, max cancels and so on.

How to do a normal grab?

Button Translation:
-> – Right button
HP – Heavy Punch
HK – Heavy KickConsidering your opponent is on the right side of the screen while your character is on the left-side, normally you would walk towards him and grab him by the collar and squeeze his neck! But hey, this is video game and you can’t do that yet, so you would walk towards him and hold the right button on the d-pad(or keyboard) and once you’re close to him you would release -> and press -> + HP at the same time. This would result in a normal grab.

However, using this method online is too obvious and players will mash all buttons on their gamepad at the same time as soon as they realize you’re going for a collar grab on their neck.

So I’ll definitively be teaching a few different tricks just for grabbing your opponents in the next few sections.

How to Run and Throw your opponent at the same time!

So in order to run on the screen, you’ll do the usual stuff and press -> -> twice in a row. But in order to run and grab properly, there are three known ways to do it effectively and some people may find one or the other easier to execute depending whether they’re playing on joystick/gamepad/keyboard/hitbox:

READ:  THE KING OF FIGHTERS XV How to Assign Spacebar& Arrow Keys for Keyboard

1st Method – The Normal Method: Normally, people would run towards their opponent, then stop running and press -> + HP in order to grab as soon as they’re close for a grab, however this isn’t effective and will fail most of the time for a few reasons: 1st, your character won’t stop running if you do it too fast, 2nd your opponent will become alert if you don’t execute it fast enough and will mash all their buttons in order to avoid the grab or punish your grabbing attempt.

2nd Method – Running Crouch and Grab: as a Safe option to Method #1, you can run towards your opponent and feint a footsie by crouching next to them and finally doing the grab/throw by pressing -> + HP, however you’ll need to space the crouch correctly before doing the grab or else it won’t come out. This method is better than #1 but will fail if not spaced correctly, it requires your character to be very close to the opponent right before crouching which will likely fail if you’re too scared to run forward or anything of the likes. Your opponent can also walk away which will also result in a failed throw attempt.

3rd Method – Running and Pressing Backwards for grabs: This is by far the best method(IMHO), to do this make your character run towards your opponent and as soon as it closes in for a grab, press <- + HP instead of doing the normal grab which would be -> + HP or -> + HK. This works effectively in the current version of the game, hopefully this doesn’t get changed.

4th Method – Running then pressing backwards and forward: This is an alternate version of #3 method, in here you’ll do the same as described in #3 but as soon as your character gets close to your opponent you’ll press <- once and then press -> + HP or -> + HK for a throw. In my opinion, this is safer than #3 but not as effective and it will likely not change in future versions of the game once it gets patched. The reason it’s not as effective as #3 is because pressing <- for too long may alert your opponent or make your character walk a little bit away from your opponent which can result in a failed throw attempt.

READ:  THE KING OF FIGHTERS XV How to Enable V-Sync

In summary, you should be using #3 and #4 methods, they’re more guaranteed #1 and #2 and also easier to use.

How to Jump then Land and Grab your Opponent

Jump towards your opponent and as soon as your character lands on the ground, press <- + HP or <- + HK for a grab/throw.

Note that this is risky and unsafe by default because it requires you not to attack your opponent while jumping on top of them.

In summary, this should be used only when you’re 100% sure your opponent thinks you’re gonna attack them from the air.

How to do a Tick Throw

A Tick Throw is when you pull a LP or LK and then grab your opponent as soon as they recover from the block stun; it’s called ‘Tick’ because it’s as fast as the tick of a clock and because of that your opponent won’t see it coming to them.

Step 1: get close to your opponent and pull a LK or LP (Light Kick or Light Punch) while crouching
Step 2: as soon as your opponent blocks or get hit, walk slightly forward by holding ->
Step 3: finally, as soon as you close down the small gap in distance, let go of the -> button, and then then press <- + HP for a throw.

How to Counter-Grab / How to Tech Throw your opponent

Tech throws are as important as throw, it can save your day during the match as an opponent tries to finish you off or get out of the corner by throwing you at the corner he was in.

To do a tech-throw, all you have to do is read when your opponent is gonna attempt a grab on you, once you’ve seen that through his eyes, all you need to do is press -> + HP or -> + HK and then his grab will fail.

If you have difficult understanding, try the ingame tutorial.
Doing tech-throws is the difference between a good, average and expert player.

Finally, grabs and throws are important not just for the damage, but because it can turn the tables against your opponents! Imagine you’re at the corner of the screen and your opponent is pressuring you, he then stops attacking and waits for your turn and as soon as you notice this you run and throw your opponent INTO THE CORNER he is now at the corner ready to eat pressure until his Health Bar depletes.

Mind you that grabs can also be used to finish the match by destroying all your opponents chances: Imagine you have your opponent cornered, he has low health and he is blocking all of your moves, you can finally end the match by running and grabbing your opponent instead of giving him the chance to turn the tables on you by punishing you and doing a Lvl3 super on you.

Furtherover, grabs are the difference between a good, average and expert player; The higher the level, the better his grabs and tech-throws will be.

That’s all we are sharing today in THE KING OF FIGHTERS XV Throw & Grab Guide, if you have anything to add, please feel free to leave a comment below, you can also read the original article here, all the credits goes to the original author Xakurinha