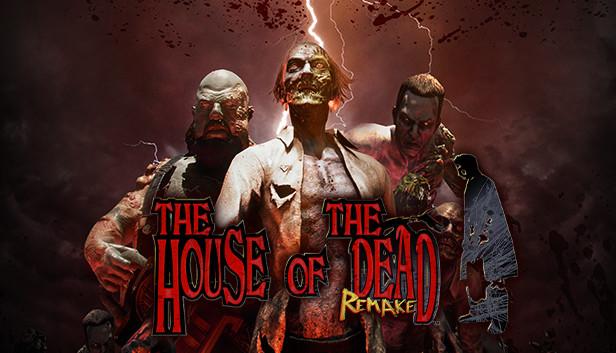 It provides all of the information you need to install the necessary driver software (BetterJoy) and configure it to work with House of the Dead. This guide covers outputting gyro inputs from the Joy Con to mouse output and to joystick output. Steam controller configurations and BetterJoy configuration parameters are provided.

For this, you will need a Nintendo Switch Joy Con (configuration is for right Joy Con, but could be modified for a left Joy Con if desired) and the BetterJoy driver available from Davidobot’s GitHub. This driver appears to be meant for Windows 10 and has been tested on Windows 10 in the scope of this guide. Other operating systems may or may not be compatible.

Note: Davidobot is not involved with this, and I am using his freely available tool as-provided on his GitHub to accomplish this. Many thanks to him for putting in the time and effort to develop this tool so we can have nice things.

Once these steps are complete, you’re ready to run BetterJoy.

Once BetterJoy is installed and your Joy Con is connected to your computer via Bluetooth, it’s time to open BetterJoy

Open BetterJoyforCemu.exe, and it should detect your JoyCon as shown in the image. (Note: Cemu is a Wii U emulator for which this driver was originally intended, hence the name. This version doesn’t require Cemu, and it will work fine for standard use on a PC too.) 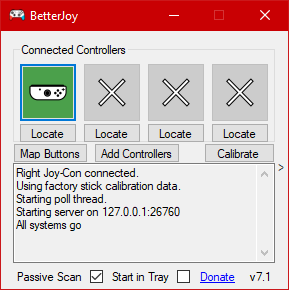 The Joy Con starts in horizontal mode, but we want it in vertical mode. Simply click the image, and it will rotate. 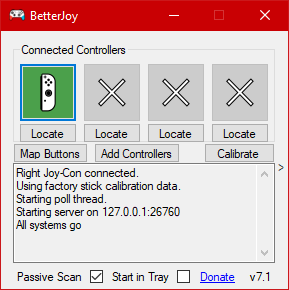 READ:  THE HOUSE OF THE DEAD: Remake Deratization Achievement Guide

In my testing, I mapped the following for keyboard/mouse: 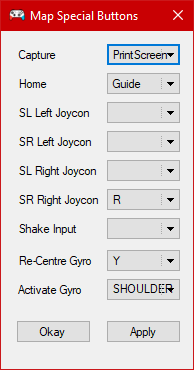 It is of note that the mapper calls the right side of the controller “shoulder” and the left side “shoulder2,” and the bumper is _1 while the trigger is _2. For example: the right bumper (R on the Joy Con) is shoulder_1 and left trigger is shoulder2_2. 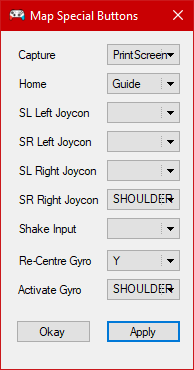 These configurations can be tested by searching for “game controllers” in Windows search to find the Windows controller testing utility. Once that is open, click “Controller (XBOX 360 For Windows)” and click properties. This window will show you which buttons and axes are firing when you press the corresponding buttons, allowing you to test your mappings, although it is more helpful if you have an Xbox controller to test in parallel since the utility calls all inputs by generic numbers and X, Y, Z axes. 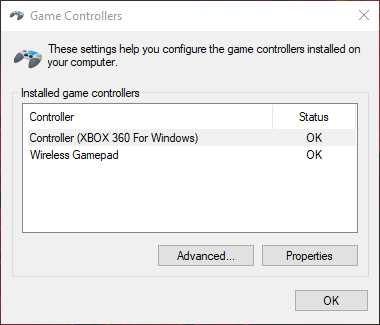 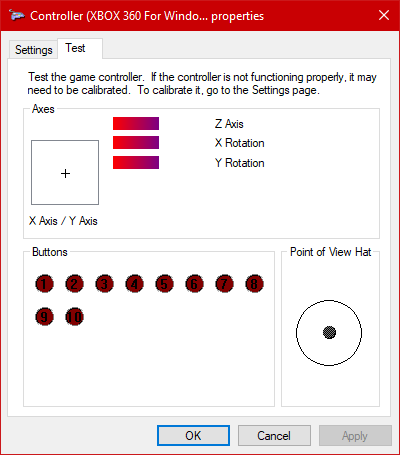 Buttons that are not unique to the Joy Con will be handled by Steam’s built-in configurator (which recognizes the Joy Con as an Xbox 360 controller), and I have generated and play-tested Steam configurations that can be applied for either joystick input or mouse input. Additional configuration parameters for BetterJoy and accessing the Steam profiles will be addressed in the next sections.

Some edits also need to be made to the BetterJoy configuration file. To do this, simply open “BetterJoyForCemu.exe.config” from the BetterJoy folder in Notepad++ or a similar text editor.

Note: Notepad++ is better than Notepad because it has syntactic highlighting and better formatting, making it easier to find and modify these parameters. However, it is not required, and these parameters can be modified in any text editor of your choosing.

The changed settings are as follows (all are changes, not additions, and default values provided by the developer of BetterJoy exist as comments in the configuration file):

<add key=”AllowCalibration” value=”true” />
-This allows you to calibrate the Joy Con gyro. Not sure if it’s helpful, but I prefer to do it before I start playing

For mouse aiming:
<add key=”GyroToJoyOrMouse” value=”mouse”/>
For joystick aiming:
<add key=”GyroToJoyOrMouse” value=”joy_left”/>
-This is key for which configuration you use. In fact, it is only one of two lines different between configuring for mouse or joystick input. “mouse” will output gyro inputs as mouse data and “joy_left” will output gyro inputs as left joystick data (which House of the Dead reads for aiming if using a controller)

For mouse aiming:
<add key=”UseFilteredIMU” value=”false”/>
For joystick aiming:
<add key=”UseFilteredIMU” value=”true”/>
-This is the other key difference between the configurations. My experience is that FilteredIMU is “smoother” and requires more physical movement for gyro detection. This is problematic for mouse aiming (it takes too much movement for a response, set to false) but essential for joystick aiming (raw gyro is too jerky, set to true).

READ:  THE HOUSE OF THE DEAD: Remake All Route Map Guide

<add key=”GyroMouseSensitivityX” value=”120″/>
<add key=”GyroMouseSensitivityY” value=”80″/>
-These affect gyro sensitivity when read as mouse input (has no effect on joystick input). I find these numbers work best when using an in-game sensitivity of 3.0. They provide close to 1:1 movement with the Joy Con vs the crosshair sitting at normal viewing distance from a 15″ laptop screen. Your mileage may vary based on preferences, hardware setup, etc. Edit as you see fit.

All other parameters are left at their default values. All are well-documented by the developer as comments in the configuration file, so refer to that documentation for any questions or further modifications.

The Joystick profile maps right stick to left stick to allow it to control the game. It also applies an anti-deadzone to the center of the joystick to make it more responsive to any movement instead of requiring you to move a certain threshold before any movement takes effect.

The mouse profile maps the buttons to appropriate keyboard keys. Enter is mapped to A to assist with navigating menus, but overall, it’s better to just use mouse and keyboard for navigation.

Any bindings can be easily changed with the Steam configurator as needed or perferred.

Some Last Steps Before Jumping In

For reasons that are unclear to me, using the filteredIMU setting for gyro to joystick mapping results in the X axis of the joystick being inverted.

To fix this, check the invert X axis option in the House of the Dead control settings: 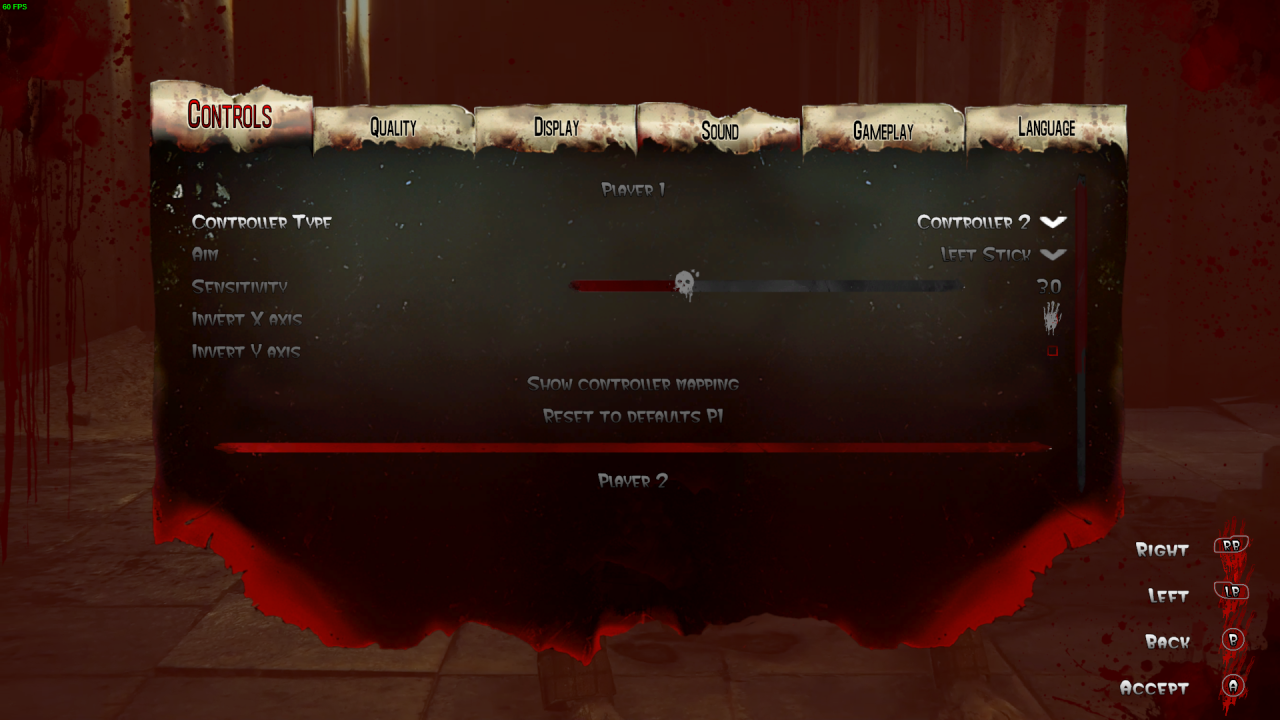 Be sure that you also select the right controller input. I think that the Joy Con itself is detected (Windows can recognize them by default after all, even if it can’t use the gyro inputs), and it comes up as Controller 1, so I need to select Controller 2. Luckily, House of the Dead tends to automatically set inputting controllers to Player 1 on that screen (I think to keep you from soft-locking yourself), so if you move the joystick on the Joy Con, it should automatically set the right controller (in my case Controller 2) to be player 1. It’s also worth mentioning that this can be really problematic when trying to set up additional controllers and/or keyboard mouse controls for another player through remote play together, so be careful.

Also, remember to toggle the gyro controls on by pressing R. They can make it difficult to navigate menus (especially with the joystick mapping), so I usually do it once I’ve started the game and reached the “shoot to start” screen before I…well shoot to start.

Final Remarks and Remote Play Together

I know this game has gotten a lot of negative press due to disappointments in Joy Con controls on Switch, lack of out-of-the-box light gun support on Steam, poor performance in some cases, and some unappreciated deviations from the source material. Overall, I’m hoping that this guide can provide some joy (pun partly intended) and another, slightly more accessible light gun-like option to the community.
READ:  THE HOUSE OF THE DEAD: Remake How to Fix Startup Crash Bug

I will be the first to admit that it’s not perfect, but I’ve found it to be really responsive both with mouse mapping and joystick mapping. Originally, I intended to try to get this to work so I could have a “good enough” option for multiplayer with my friend who was struggling to map his Steam Controller’s gyro inputs to joystick and make them accurate enough. In the end, it turned out to be a lot of fun and my preferred control scheme for the game.

Regarding multiplayer, I have not run into this issue, but the developer of BetterJoy notes that BetterJoy can cause clashes with additional XInput devices, and an additional HIDGuardian driver (that’s included with the BetterJoy files) needs to be installed to prevent this. I did not have any issues with this, so I have not installed HIDGuardian. It doesn’t seem to affect my Xbox One controller inputs, and it doesn’t affect Steam controller inputs from a remote play together client when I host, but that is the extent of my experience.

Regarding remote play together, configuration can be a little tricky, but I have gotten it to work with me hosting using the Joy Con mapped to joystick movements and the client using a Steam Controller with gyro controls mapped to keyboard/mouse. I just wanted to enumerate some pitfalls that we ran into so someone else doesn’t spend 3 hours on a Friday night trying to get it to work (assuming your friend will be using keyboard/mouse; thanks, Kevin for suffering with me):

That’s all we are sharing today in THE HOUSE OF THE DEAD: Remake How to Use JoyCon as a Light Gun, if you have anything to add, please feel free to leave a comment below, you can also read the original article here, all the credits goes to the original author Mark and Kevin