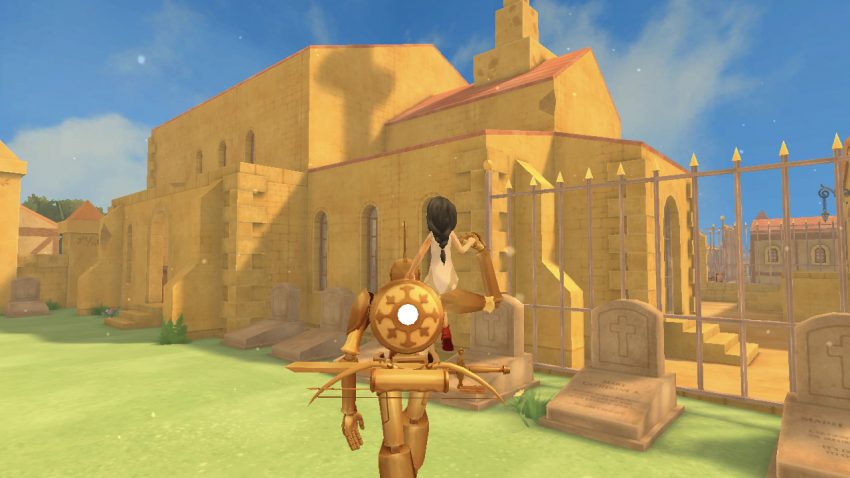 A guide for completing all of the achievements in the game. You will get 6 of them just by completing the story but the other 4 can be missed.

Free from our Cages
Complete the prison towers.

Always Turn Left in a Maze
Complete the maze.

Branching Paths
Complete The Girl and The Robot.

Not Smart but Strong
Complete the shape puzzle in the prison towers with brute force.

You’ll encounter the shape puzzle in chapter 1 (Prison Towers). It’s impossible to miss but to get this achievement you will have to fail the puzzle by stepping on the wrong platform that is on the floor. Doing that will make 6 dark armored knights attack you, which you’ll have to defeat.

The way I defeated them was to run around, then attack the group once or twice and then run away quickly before they hit me. It’s very easy for them to surround you and get you stuck in a corner so make sure that you have enough space to escape from if they get too close. When they attack they will put up their shield to block themselves, if you are quick enough you can dash behind them and backstab them for an insta kill. When they die they explode and deal friendly damage so if you are having trouble backstabbing them while they are many it might help to focus on killing one or two of the knights in the group so their explosion can deal some extra damage on the others.

Found in chapter 2 (Castle Town) and after chapter 3 (Maze) when you go back to Castle Town. After doing the puzzle where you connect red floor panels to open doors you’ll end up in a church that’s connected to a graveyard. Behind one of the tombstones in the graveyard is the little Gnat-Man. Shoot him with the robot’s bow.

Found in chapter 3 (Maze). After taking an elevator down as the robot you’ll encounter a puzzle with an invisible path that can only be seen by the robot. After helping the girl navigate through it both the girl and the robot have to stand on buttons which will open up a room for the girl. Go into the room and look at the wall to the right. There will be a small blue arrow on the wall. Jump into the wall which will reveal a hidden dark path. Follow the path forward and then to the left to find the cute little robots.

Memories from a Kingdom
Examine all the paintings.

There are 8 paintings in total. 4 in chapter 2 (Castle Town) and 4 in chapter 4 (The Throne Room). They are all very obvious but you have to interact with them for it to count. You will go back to Castle Town after chapter 3 (Maze) so if you missed any in chapter 2 you will be able to get them again later.

Chapter 2: All of them are found during the puzzle where you have to press on red panels on the floor.

1. King sitting on his throne: After going down a spiral staircase and pressing the first red panel the painting will be in front of you.
2. The king going to war: At the part where you have to shoot arrows at a spiny thing to open metal bar gates.
3-4. King and a girl meeting and sitting together: At the end of the puzzle after you crawl through a hole in the wall as the girl.