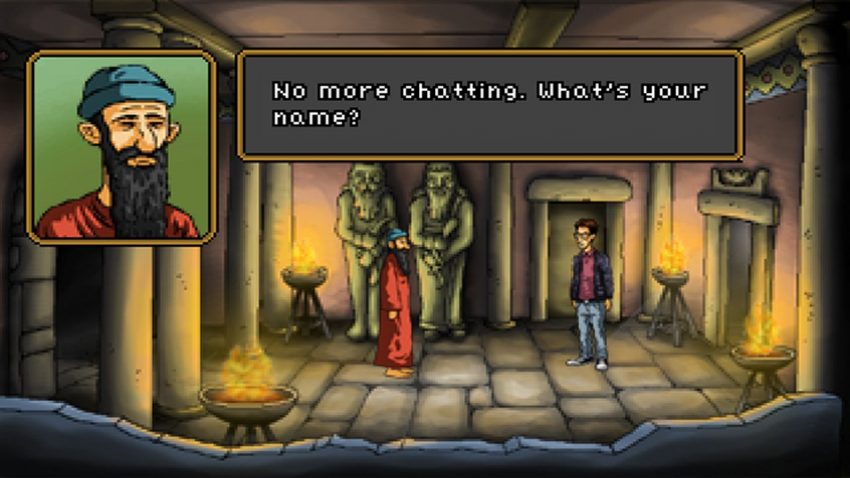 Guide to getting every achievement in Tales PC.

It’s recommended you do separate playthroughs for all the achievements. Don’t worry though, the second is very short.
First Playthrough (22 of 24 achievements)

Done right, you will unlock 22 achievements and only have two left for your second playthrough.

Turn off autosaves and play through the entire game without saves. This isn’t nearly as bad as it sounds, and you should be familiar with the game now after the first playthrough.
It takes around 45mins if you skip dialogue and cutscenes.

These achievements are ones you should be aware of before starting the game.

The Observer
You made sure to examine and look at many things throughout your tale!

Examine (right clicking) on a large number of items. This unlocked for me during Thor’s section of the story, so there’s no need to pixel hunt for every examinable item. Though I recommend you examine everything along the way as there won’t be enough items left if you leave it too late in the story.
It seems like you need ~200 items examined and they all need to be different, so you can’t keep examining the same item to get the achievement.

Ker’aooc The Wizard
You only used Merlin’s advice when strictly necessary – the rest was your own wizardry!

There are eight times in the story when Alfred (or a note in the case of the first time) will suggest asking Merlin for advice, and usually Merlin will direct you to a new book.
However at least four of these Merlin sections can be skipped entirely.

The achievement unlocks during the credits, when Merlin is show on screen.

Alfred Walsh – Chatty Man
You spoke to many, many characters about many, many things!

I don’t know the exact requirements for this besides exhausting as many dialogue options with as many characters as you can. I unlocked this on the same playthrough as “Ker’aooc The Wizard”, so you can safely skip asking Merlin for advice (except for the four times needed to progress the story).

Below is a quick list of all the people in the game.

– Atab: exit the kitchen to talk to him
– Queen Ninsun (story)

– Mayan guys (part of the story, but ask about tomatoes first)

The achievement unlocks during the credits, after all the voice actors are credited.

Lord Of The Files
You played the game from start to end without autosave or saving!

Self-explanatory. Recommend you do this on a fresh playthrough without worrying about other achievements.
A speedrun of this game skipping all dialogue and cutscenes will only take around 45 minutes.

These 5 achievements can be missed because they require you to solve a puzzle in your first attempt.

Riddle Me This
You solved the tavern riddle in one attempt!

Burglar Bill
You opened both Panurge’s box and the Giant’s box on the first attempt!

Note there are two parts to this achievement.

Also in Gargantua and Pantagruel, when you need to fix the mill to make flour.

The Man, The Myth
You solved the Mayan Creation Myth puzzle in 1 or 2 attempts!

In Popol Vuh after completing the kicking minigame and you are sent to the temple.

Classy Classicist!
You solved Athena’s riddle in 1 or 2 attempts!

In Sisyphus and Bellerophon, at the top of Mount Olympus.

These cannot be missed and will come naturally by playing through the storyline.

Arthur and the Knights of the Round Table
You travelled into a book and met Merlin the wizard!

The Great Escape
You escaped the prison of Uruk, great!

Immortal Twin
You escaped from the Mayan temple!

Gilgamesh
You completed the Gilgamesh tale!

Tales
You defeated Oblivion and saved the Tales!

These two achievements don’t fit in any other section.

Yellow Brick Road
You were curious about The Wizard of Oz tale!

At anytime during your playthrough, click the “Oz (The Wizard of)” entry in the library catalogue. Nothing actually happens, other than the achievement unlocking.

Self explanatory. Assuming you followed my advice, this will unlock after you finish your no-save playthrough.