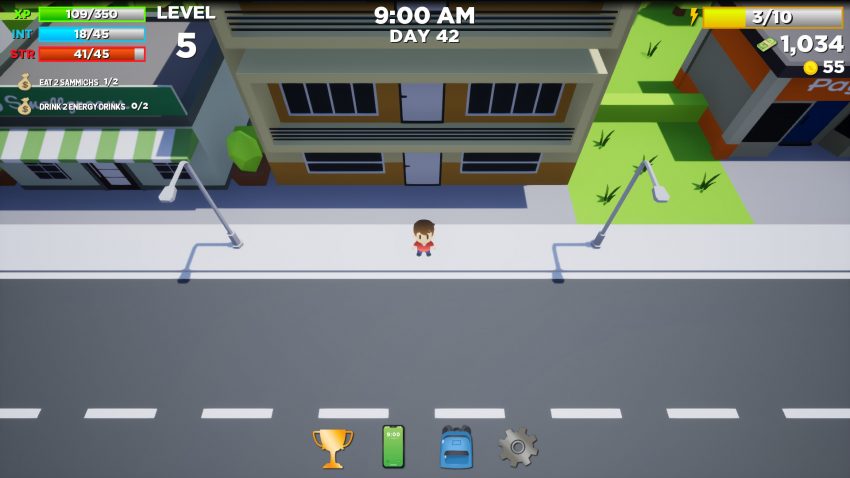 Here is the Super Life RPG Oregano and Golden Egg & Ticket guide. hope you like it.

Oregano Guide:
On day 420 go to Smallgreens and buy at least 4 Oregano costs $50 each. Give them to Papa Jay who is behind the house on the very bottom left of the map which you open up by giving the owner a pineapple which you can get by buying the house on the bottom right (cheap house) and passing between the gap on the south side of the house. Then follow the path north and you should find the pineapple near northeast corner of area 2 (which is the designation for the area for the park).

Golden Egg:
1. Buy small house(southeast side of park or otherwise known as area 2).
2. Get Pineapple. Pass between the gap on the south side of the house to the east then follow the path north and you should see a cooler take the pineapple from within.
3. Buy big house(southwest side of park)
4. Give pineapple to guy in the southwest house of the street.
5. Go to back of the house and buy the $5 million(developer may change price) house from Papa Joe.
6. Get the 3 keys
a. Bronze key is in the maze in area 1 or Downtown. Entrance is between the tree where you get Margaret’s (Old lady’s) cat Boliver, and Slimmy Sams. Follow the maze through until you get to the chest at the end.
b. Silver key is given by the Lich which only can be accessed after you get the bronze key. Also, you need to have scored at least 25k in the Space Blaster game and have received the Pizza King T-Shirt. So once you have that stuff then in the park go the northwest manhole cover and press E a time or 2, then southeast manhole cover, then northeast manhole cover, then finally southwest manhole cover to make the Lich appear and then he’ll give the Silver key.
c. Gold key is given by Roger the alien. You need to have a Time Potion and during the 1am hour go the bridge in area 3 or near CostGo then follow the bridge north to the gas station and there should be a blue sparkly on the ground walk over it, and then proceed to north of the CostGo building and there should be another one. Walk perfectly east from this 2nd one so you can easily hit the 3rd and 4th one. The 4th one should be on the northeast side of the CostGo building. Then go south to under the Philo overhang to get the 5th one. Then behind 23 hour fitness for the 6th one then go south to the college entrance for the 7th one then on the east side of the Medical building for the 8th one then the south side of Pizza King for the 9th one then go around the west side of the Medical building and go to the entrance to the Arena for the 10th one and then go to the soccer ball in the middle of the Arena to talk to Roger who will give you the Gold key
7. Make sure to have found all 3 pages for Ellie.
a. 1 you get for doing Chad’s stuff. (Frat boy at north end of campus)
b. 1 you get from trash bins on southwest side of Arena
c. 1 you get for breaking the rock (with a Str Potion) on the south side of Taco Box Cantina and then following the path to pick it up.
8. After all this talk to Ellie again and she should hand you the Spellbook, which you need to break a barrier later.
9. At 12am or last hour of day go to Papa’s Mansion and go to the Den and unlock and then enter the wardrobe.
10. Maze 1 (Magical Forest) Talk to Mr. Goat Man and quickly buy 1 of each potion that he carries unless you already have them. (XP Potion, Int Potion, Str Potion, Time Potion each costs 100 Klick coins I think)
11. Then you need to figure out the maze in under the time limit and will eventually need to be good enough to do the maze in about 55 secs after you get the Energy Potion/Infinity Potion. Once you make it to the end it will transport you the the next area. Also, you can enter the wardrobe only once per day.
12. Maze 2 (Frost Haven) Quickly talk to the Ice Queen and give her a Rose (if you need a Rose you can dig one up in the west graveyard of this area) she then gives you Speed 6 shoes which you’ll need to help beat the clock.
13. Then you need to figure out the maze in under the time limit and will need to later be good enough to beat it in under 55 secs. Once you make it to the end it will transport you the the next area.
14. Maze 3 (Dragon Castle) Quickly talk to Crazyblobb who gives you another key.
15. Please practice all 3 mazes until you can clear them in about 55 secs. (WARNING after you pick up the Energy Potion your new time limit will be 60 secs instead of 90 secs.)
16. Now make your way through this maze and go to the northwest corner and pass through the trees that would usually block your path and get to the well which will give you the Energy Potion.
15. Then let your time run out and get back to Maze 3 on a new day and with 1 of every Potion (XP, Int, Str, Time, Energy) press E on the fountain when you enter. This should give you the Infinity Potion which will allow you to enter the Dragon Castle at the end of Maze 3.
16. Then just make it to the end within the Time Limit and you will be granted the Golden Egg and Golden Ticket by the developer Austin.
Written by riotofblood