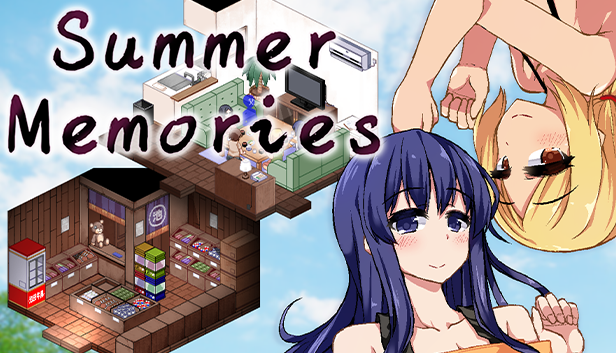 If you play Summer Memories and looking for a guide about everything of the game, this guide provides gameplay, stats, family outing, map, skills, items, side quests and all endings, let’s check it out.

(written from the Dlsite version then adapted to Kagura’s translation; may contain errors or omissions) 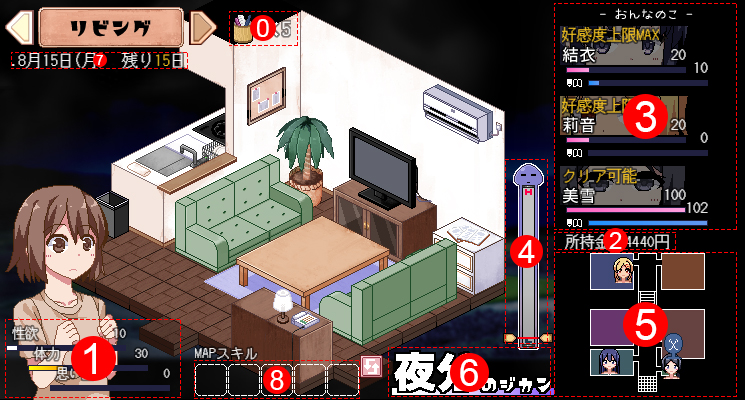 The game takes place over 30 days that you can occupy with different activities.
Each day is divided into 4 moments: Morning, afternoon, evening, night.
Each moment has its own events. The player can manually move to the next moment by clicking on the time indicator or by running out of stamina.

The pencil pot at the top of the screen represents the number of actions the player can perform before moving on to the next moment. The player starts with 3 points and earns 1 after each family outing (Sunday). Can also buy 2 in for 100 points each. (see Bonus)

The player has 3 bars:

Every Monday, Miyuki give you 500Y. If you have sex with her, she gives you 1000Y instead. There are 2 way to earn money (¥) : By doing Yui or miyuki’s mini-game job or by reselling your fishes and bugs catch to Suzuka, the animal survey girl, after the 21st day.

Each girl (Yui, Rio and Miyuki) has 2 bars each:

*To trigger Miyuki’s event 1, you must sleep at least once with her (to see the Miyuki and Husband sex scene). When your affection’s and homework’s bars are max., during the afternoon a kitchen event will occur. After that, sleep with either Rio or Yui.

Each girl also has sex statistics represented by 4 additional bars that appear instead of the house map when you talk to them.

Satisfaction increases by as many points as the amount of lust points spent during sex (see lust) and is reset once sex is over. At 100 points, the girl offers you an object.
If you sleep with a girl whose other 3 bars are at 200 points, she will wake you up with a pipe.

The vertical bar is the noise bar. When the player have sex, he can vary the intensity of the act. The higher the bar rises, the more noise the character makes, which increases the level of vigilance of the people around. A bomb icon appears next to a character whose vigilance level is above 70. If the vigilance level rises to the maximum (max. 100), this character will enter the room = Game Over. Sleeping with a girl decreases her vigilance by 5.

*Miyuki’s toilet mini-event: Appears when you come in your pants. One day Miyuki will talk about your pants’ accident. When Miyuki’s affection is high (>40), if you ask her to sleep with together the evening another choice of dialogue may appear: she will ask you if you want her to clean you. (yellow answer)

Silence
40 SP
Prevents the Vigilance from going up

Nightwalker
40 SP
Allows to walk around the house at midnight

Suggest A Foursome
See Vigilance
Allow to have sex with Rio, Yui and Miyuki at any empty room. Force the Foursome ending
Coax Skill

Having unlocked the Foursome skill, once unlocked, the end is automatic.

Appears day 10. Unlock mini-game after 145 stamina. Start her mini-game (training) and successively beat his/her records. At the 4th race, catch her to trigger the sex scene.

The longest quest. Get a Menko and go talk to the teenage band in the square. Show the boy with the fuse the Menko you are going to play and then a mini-game starts. Restart the mini-game to beat all your opponents until you beat the boy in the fuse and then it will disappear. (3 times)
The boy will reappear at night, talk to him.
The next day, continue to play with him several days in a row. One day, a girl will show up at the square as a Menko pro player. Fight her. During the mini-game, when the girl appears to throw her Menko, click on her to kiss her. Continue until you win.
The next day talk to her again and restart the mini-game by kissing her to start the sex scene.

From the 8th day, you can use the computers in Yui’s or Rio’s room.
Use every day until a breast picture appears.
Repeat the next day to see a booty picture appear.
The next day a photo of a teddy bear appears. After the event, go to the candy shop and click on the bear on the counter.
The next day, use the computer but you will not receive any more pictures, leave the house, go to the candy shop and talk with the sales assistant. The sex scene will start.

Appears after the family outing to the mountains (day 14). She buys the insects and fish caught. If you bring her one insect and one fish of each rarity (8 in total, rarity 1 to 4, no matter the species) then she will reward you with a sex scene.

Appears after the exit to the beach (day 21). Start her fishing mini-game and catch the yellow fish to pull up 1 piece of treasure. Repeat (difficulty increases) 5 times for the sex scene to start.

That’s all we are sharing today in Summer Memories Ultimate Guide (Gameplay, Stats, Items, Side Quests, Endings), if there are anything you want to add please feel free to leave a comment below and we’ll see you soon.