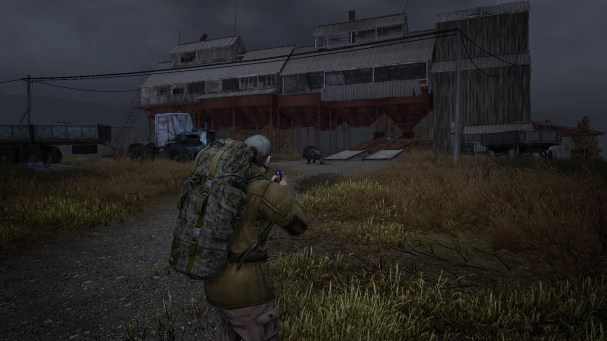 Some quest and NPC locations for quick reference

It’s not a complete list of all quests, but a handful of useful ones.

ALL patrols start in the north of Г5-4 ,
You have to go in numerical order to each checkpoint along the patrol and finish in the specified time.
read chat, patrols update at each checkpoint, some spots you have to kill things

1: Prospect of Heroes of Labor (5 Pink dots)
30 min timer
Kill a dog and Butcher one Dog Tail along the route.
Return to Acid in time.
Rewards: exp, various rep. 12210 rubles

the orange on the right side is hard to see, 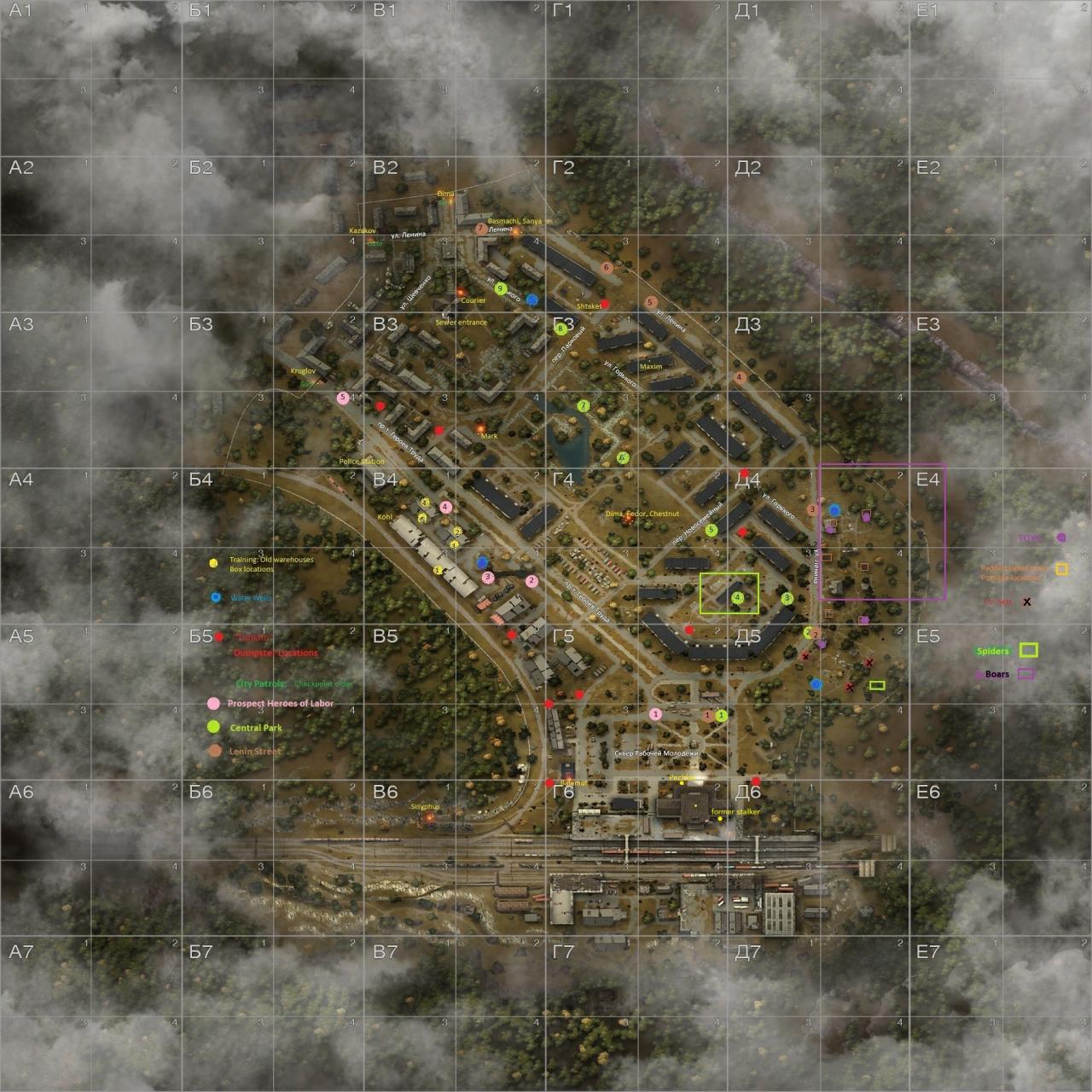 some Daily quests from station npc’s

Get 1 Padded Jacket (Orange squares) Quest giver:former stalker
д4-2 and д4-4
(randomly found at one of the six locations)
Reward: a bunch of different rep, exp and 803 rubles

Tips:
you can lose dog/rat/boar aggro entering a house, but they have 2 bogies inside
you can lose bogie aggro by standing on a table etc..they are easy to kill

Box 1 can be tricky to find, it is behind one of the cargo boxcars in B4-3

Mark’s daily quest is I believe, to run around the center park counter-clockwise twice, reporting to him after each lap. After the first lap, you get a stamina buff for 10mins making the second lap a breeze, and you a track star for 9 minutes or so.

Search each area as they may have multiple dumpsters, till one allows you to loot it
Quest should update in chat ? maybe not,

Just visit all 11 locations and loot

Acid Г6-2 inside the station
He’s not marked on this map….go seek him, just don’t make him run after you
Pechkin Г6-2 Toy quest
former stalker Г6-2 T.V. Set and padded jacket quests
Balamut Г6-1 Tomato quest
Mark B3-4 Dailies along with some key quests
Courier B2-4 Quests to advance through the gates
Shtaket Г2-3 A bunker entrance down leads to him. Bandit leader, has many quests.
Basmachi B2-2 ….
Dima, Kruglov and Kazakov are Gate Guards, some dailies from Courier and Greek require visiting their stations and getting reports(talk to them) or radio tubes (from their desks)to replace with Basmachi

Maxim Г3-2 he is inside the building, middle door
A Technician that has a quest line leading to an MGD
(the device to capture artifacts from anomalies)

Dima, Fedor and Chestnut Г4-1
Chestnut wants 5 raw meat, he will give you back 2 fried meat
Dima buys rat tails and/or dog hide in stacks of 5
Fedor has a Daily quest to collect some silks from just killing spiders

Sisyphus B6-1 Has a quest needing some screens

Kohl B4-1 suppose to be a body, not sure what for

Very rough outline, not referenced on the map –

I was able to get a Mosin rifle from completing Alex’s quest line “Gathering Information”
Alex is on the second floor of the police station.

The quests are pretty much are, doing quests for Lev, Stick, Shtaket and Acid,
and then informing Alex of what they are up to after each quest for them…

1) Alex needs information about the affairs of scientists.
(get quest from Lev (Leo) Valerianovich, first floor of police station)

To gather this information, it is necessary to perform a task scout a location on the outskirt map around H14-4 . Just go to the location and it triggers the quest end.
Return and tell Alex.
(may have to do one quest before he gives this one, I’m not sure)

2) Alex also requires information about the affairs of Stick. To gather this information, you need to perform a quest “Messenger” from Stick , followed by a return to Alex and report.

Stick is just outside the police station door,
a) He will have you talk to Greek (second floor police station)
b) Stick then will give a quest “suspicious noise” just scout B3-4 and find boars, quest will update
Then go tell Valentine, found inside the Police Station, Maybe tell Alex ? return to Stick
c) Stick should give the Messenger quest – ” Coherent stick disguised as a local and can wait in one of two places: at the station or behind the walls Liubech proud nearby. ”

Tell Alex and swap the packages,

I found the disguised local, was at Д6-1, the guy who trades meat for ammo.
Return and tell Alex.

3) Alex needs to know the affairs Shtaket. To gather this information, it is necessary to perform the task Sour: mercenaries Shtaket and Shtaket: baryg cache , followed by return to Alex and report.

Shtaket is located in the basement in Г2-3
you will have to do a few quests to gain his trust….

a,b,c) you may have to buy a block of ivy special cigarettes(23k) and loot or buy some tea, coffee cans, toilet paper, drinking glass, etc to gain his trust to progress but it is worth it, giving him cigs he will reward you 15k
(if you haven’t looted what he asks for, sometimes the store at the Police Station will have them for sale.)

*)……till he gives a quest “cache baryg”…..
you will find the cache at a destroyed house located exactly in the center of the square B3-2, it is necessary to go inside the building, go up the stairs as much as possible and then with the help of jumps to get to the cache box.

-at some point , I think now, go get quest “mercenaries Shtaket” from Acid
(available after quest “work for acid” which is kill a few pups)

1) Sour asked to find out from Shtaket, is it true that someone has ordered to kill him. May be able to know who the customer or be able to somehow pay off.

go talk to Shtaket about the “hit” on Acid
then return and talk to Acid about it
Return and tell Alex.

Once done, you have enough personal credit with Alex to buy a Mosin and a few clips, Alex will also offer a clip and rewards 30041 Ruble, enough to cover the rifle cost+

It doesn’t take to long, getting Shtaket to grant the cache quest can be annoying

I am sure I have something wrong above, as the translations can be hard to decipher

but it should help complete the quest lines