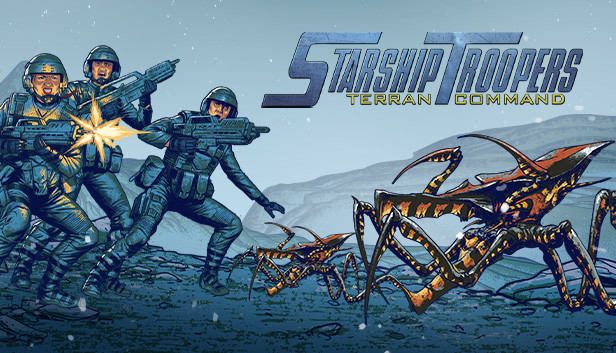 Veteran troops in Starship Troopers: Terran Command should feel like veteran troops. These changes make fully vetted troops much more valuable and useful than rookie troops. It takes more time to fully vet them now, but the benefits make it well worth it.

Want the challenge of relying on the iconic Mobile Infantry to get the job done?

Well, these changes are for you. My original intent was to make veterancy ACTUALLY mean something worthwhile. Besides the unlocked ability, there is no real benefit for having a Vet3 squad over a non-vetted squad – giving no real incentive to keeping them alive. Sure, there is a small bonus to accuracy and fire rate, but its effect is negligible at best.

Perhaps, I’ve been spoiled by the Company of Heroes franchise, where you do everything you can to avoid getting your fully vetted squads wiped out because of the very noticeable decrease in quality of rookie squads. That’s not so much the case in STTC. Apart from the Powered Infantry, who get a very noticeable buff at Vet3, does anyone really care about losing a unit? Just spawn in another one, right? These changes are expected to address that.

Also, these changes will increase the potency of several units against light to medium armored threats, allowing them to remain as a viable option to tackle late game missions. Want the challenge of beating the game using only basic MI troopers? Now, you can.

Note:. These are Google Sheets of the units, variables, and weapons files. To get them, Click File > Download > Comma Separated Values (.csv)

You may need to rename the file name to make sure that it says units.csv, for example. Place the files in the following folder (be sure to rename or create a backup copy of your original files).

Note: changes are highlighted in yellow to make it easy to find the adjustments on the spreadsheets.

NOTE: All units that received veterancy bonuses will gain experience at a slower rate after Vet1. This is an attempt to balance the strength of the unit by making it more difficult to get to Vet3. Also, this further incentivizes working to keep your units alive, as it now takes even longer to get a fully vetted unit.

Sure, they are good in a pinch when you need some extra firepower, but who keeps them around after things settle down? They gain no benefits, have no abilities, and those 5 supplies would be better used to get other units. We either never use them or immediately de-spawn them after an emergency use. These changes will make them worth keeping around:

Let’s face it. For its cost, the grenade launcher is a very lackluster unit. After firing its initial volley of six grenades, it just sits there for 10 seconds while the horde of arachnids is still coming at you. I found myself never building these things, as building two additional MG turrets was always much more effective. The following changes improve the grenade launcher and make it worth the cost and trade-off for two MGs.

This is a great unit, but it is too easily destroyed by Scorpions, especially when 3+ show up at once. This is a heavy piece of armored artillery, and it should feel like it. Additionally, I noticed an issue with its targeting. It currently fires a salvo of two shells in rapid succession, followed by a four second delay. The problem is that this salvo will target the same enemy – even if the enemy is in its death animation – wasting a shell. The following changes improve the Wavebreaker:

The DPS remains the same, but the unit is much less likely to waste its second shell and will, instead, target another enemy. With two cannons, the Wavebreaker now maintains a sustained rate of fire by firing one cannon at a time (although, the animation has it firing from the same cannon, lol).

Note: adjusting the values to get the same fire rate with both cannons firing still resulted in the Wavebreaker firing at the same target, despite death animation.

I get it. She’s supposed to be the equivalent of a general grade officer, but there’s no way someone would drop into this war zone with a pistol, even the Radio Operator and Tactical Officer carry rifles. Plus, it is quite difficult to level her up, given that her only practical experience-gaining ability is the bombing run. To increase her effectiveness and ability to gain experience points, she now carries a rifle.

Note: I am aware of her wonky animation while firing. The animation for her model has her pointing the rifle as though she was holding a pistol. I’m still looking into how to change her animation without changing her unit model.

In the base game, this ability only decreases the reload time of your units; however, since it alerts all other enemies in the vicinity, there is no real incentive to use this ability – as the increase in enemies only makes things harder for you. This change strengthens the ability by adding a strong incentive to use it. There may be more bugs, but your soldiers are fighting a lot harder.

This is meant to be the Arachnids’ indirect fire unit, operating much like a mortar; however, with a range of only 55, the Grenadier has to get too close to the front line before it starts firing – allowing you to quickly focus it down. This change allows the Grenadier to operate more like a conventional mortar behind the front line; therefore, if your units have been spotted, it can fire from much further away, providing effective indirect fire coverage for advancing arachnids.

Note: the sight range for the unit remains the same, with a value of 40. If your units have not been spotted, the Grenadier would still need to close the distance before it could “see” you.

That’s all we are sharing today in Starship Troopers: Terran Command Veterans Guide, if you have anything to add, please feel free to leave a comment below, you can also read the original article here, all the credits goes to the original author Anderson ABN