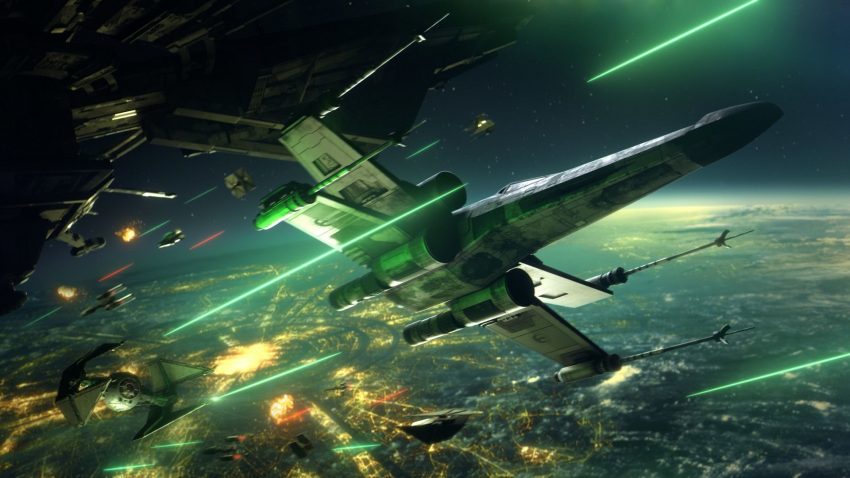 For STAR WARS™: Squadrons players, this is a guide about fleet battle, even if you are not good at shooting, you can be good at fleet battles, let’s check it out.

A successful mission begins with a capable ship. Ideally you want to coordinate with your team to see what they plan to fly out in, and pick accordingly. However, this may not always be a sure thing, as you are playing solo or have RANDOMS on your team. No worries, because you’ll have a ship ready for any situation. Here are some quick suggestions based on their purpose.

This is going to be your all-rounder. Since it’s solid at doing the two things you’ll want to be doing, have two loadouts set-up: one for taking out capital ships and subsystems of the flagship, and one for taking out fighters and bombers.

People are arguing that this is the best ship in the game due to what it brings to the table. The Rotary Laser Cannon is easy to lead with since it paints a straight line ahead of you. It also deals solid damage and just feels oh so satisfying. This, the SLAM Engine for boost gathering, and the Reinforced Hull are must-haves for bombing runs. You’ll be slow, with a top speed of 91, but with the SLAM Engine you’ll have the boost to get to your target.

This is for taking out enemy fighters. It doesn’t excel as well as the TIE-Fighter for taking AI ships out from a distance, but it will tear up a named enemy fighter if you can tail them long enough. The Rapid-Fire guns are attractive but require being right on the enemy, and the Onslaught Rockets are absolutely the best Auxiliary Fire weapon in your arsenal. Don’t bother with the Repair Droid, as you should have a Reaper out supplying heals.

This is your healer. You should be rocking the SLAM Engine to maintain the boost necessary for jetting over to friendlies and supplying them with the heals they need to stay out dog-fighting. Have another loadout (can even be the same loadout) for following the bomber on their bombing runs. The Ion Torpedo is a must-have for this and the TIE-Fighter on bombing runs so you can take the shields out of the Corvettes and capital ships.

With this in mind, it’s time to move onto the Fleet Battles themselves.

This is going to be the phase that takes place immediately after leaving the Star Destroyer. You will either be in one of three roles in this phase: dog-fighting, bombing, or supporting. Your goal is to destroy the Rebel Corvette before it can reach your capital ships, as well as defeat enough fighters to secure morale and defend your Raider.

You’ll want to bring a TIE-Fighter or TIE-Interceptor for this. Your soul mission is to defend the Raider, which means your ideal targets will be shared among you and your wingman (the other pilot that is dog-fighting). Together, your focus should be on bombers, then the other fighters, but stay near your Raider so that you have proper support. Ideally, the bomber will not be able to handle the assault and will be taken out before they can do sufficient damage to your Raider. Your other target will be their Support Ship (U-Wing) if they bring one. Despite its defense, it shouldn’t be able to stand up to the both of you. Your mission is done once the Corvette is destroyed or you’re given the fall-back order after losing enough morale.

You’ll want to bring a TIE-Fighter or TIE-Bomber for this. Ideally a bomber, but the TIE-Fighter has a much better escape potential than the TIE-Bomber does. Your soul mission is to destroy the Corvette. Take a scenic approach, unless you’re in open space with no obstacles to travel around, and even then fly on the outside of the formation. You’ll have the TIE-Reaper with you for support, and will be able to help with the dog-fighting while the TIE-Reaper fires Ion Torpedoes on the Corvette. Once hit, the shields will be either weak enough to dispel with the Rotary Gun/Burst Lasers, and only after the shield is down should you fire your payload into the Corvette. Beam and missiles, while all your energy is put into your weapons. Should you not have the luxury of a TIE-Reaper’s Ion Torpedoes, you can fly close enough to be under the ship’s shield entirely, bypassing it completely. It requires a bit of skill but with a Reinforced Hull a TIE-Bomber should be fine. Your mission is done once the Corvette is destroyed, even if you have to respawn and try again.

You’ll want to bring a TIE-Reaper for this. Your mission is to supply heals for the team and eliminate the Corvettes shields. Make sure your aim won’t be blocked by terrain or your own Raider and when you get within 1500m turn up your shields. The Ion-Torpedo will begin slowly locking on at 1500m but it is advised to wait until you are closer (500m-1000m) to fire as the Ion-Torpedo is a very slow moving projectile. A well placed Ion-Torpedo will down a Corvettes ship in one shot. It helps if other squadmates are able to ping the Corvette for you. Afterwards make sure to resupply your bombers or whoever else needs help. Then circle around and prepare for Phase Two.

Once your mission is done, proceed to Phase Two.

This is going to be the phase that takes place immediately after the Rebel Corvette or the Imperial Raider is destroyed. It consists of attacking and defending capital ships, and has a very similar pattern to Phase One. The Morale Meter at the top of the screen will let you know where you should be at any given time.

Attacking follows a very similar formula to Phase One. Here are some guidelines when making attack runs. 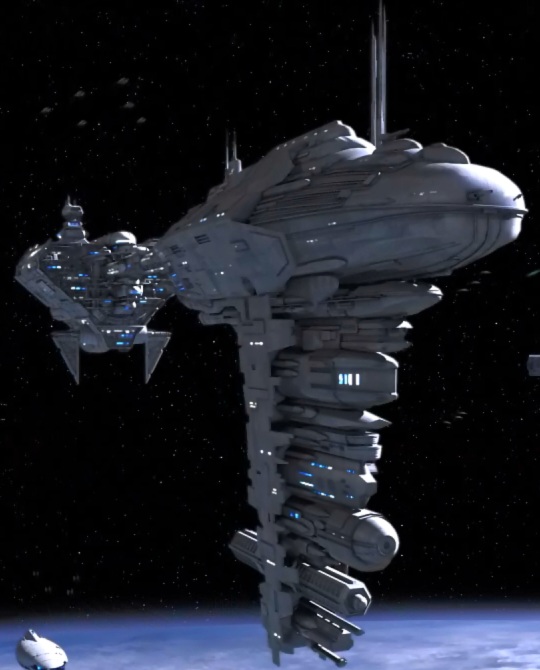 Defending follows a more similar structure to Phase One, however it doesn’t require you to change ships. A bomber taking out enemy bombers and fighters is also very viable. Here are some guidelines for a proper defense: 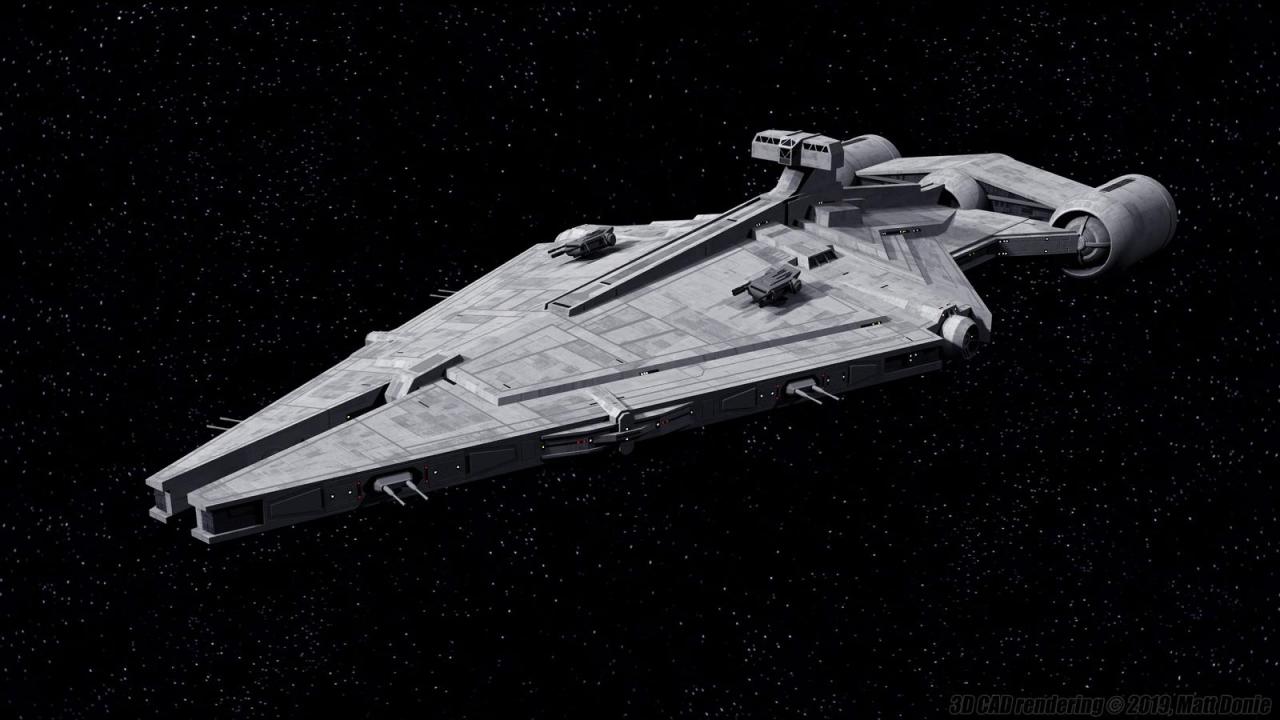 Once you move to assault their flagship, or retreat to defend yours, you have entered into Phase Three.

This is going to be the phase that takes place immediately after destroying the enemy capital ships or suffering the loss of both your capital ships. The phase consists of coordinated attacks on the enemy flagship, destroying its subsystems and turrets, and removing the fighters in your way of that goal.

On the top and bottom of the Rebel MC75 Star Cruiser are two subsystems that are insanely hard to miss: the Power and Targeting Systems. The smaller of the two, on top of the cruiser, is the Targeting System. This will disrupt several turrets on-board the cruiser and cause them to emit static to symbolize that they’ve been tampered with. This also prevents the cruiser from firing missiles in your direction. It’s probably the easiest to attack since its base at the top of the cruiser counts when fired upon. You can easily slip in under its shield and begin immediately firing at the subsystem from the bow of the ship, unlike the Power System. As before, bring in a TIE-Bomber or TIE-Fighter (with Onslaught Rockets) and take it out within seconds. A TIE-Bomber can take it out faster and has more of a chance of surviving the flight, and a TIE-Fighter can make it there faster but will possibly take two trips depending on how quick the enemy force is to catch on.

The Power System is the large knob on the underside of the cruiser. Destroying this is much safer than the other three subsystems relative to what can shoot you from the cruiser itself, however the shield around the subsystem is quite small and formfitting, and can only be passed by getting really close to the system itself. This is done by a TIE-Bomber or TIE-Fighter very similarly to the capital ships or Corvette, where you boost in and come to a near immediate all-stop once you get close enough. Unload all three of your weapons onto the subsystem, and once it’s taken out, huge sores will appear over the entire surface of the cruiser. These open sores are full of bright, noticeable static, and the only way to heal them up is to fire copious amounts of lasers into them…..

The Shield Generators of the MC75 Star Cruiser are located along its sides, about halfway down the ship. These look like gills, or grills, and can be easily targeted from a distance if the shields are down without much of a fuss. If the shields are up, it’s back to the charging tactic your bombers will love by now. This however will prove difficult, as the ship’s equipped with tractor beams near each generator. If you’re quick enough, a TIE-Bomber with a SLAM Engine and a Reinforced Hull can reach these generators by going full-boost at 2000m out. Once there, you will likely still be caught by the tractor beam. However, if you made it under the shield, proceed to light the generator up. Once destroyed, if you have time, you’ll see a dish on the side next to the generator glowing blue: that’s the tractor beam. You can turn on it next. 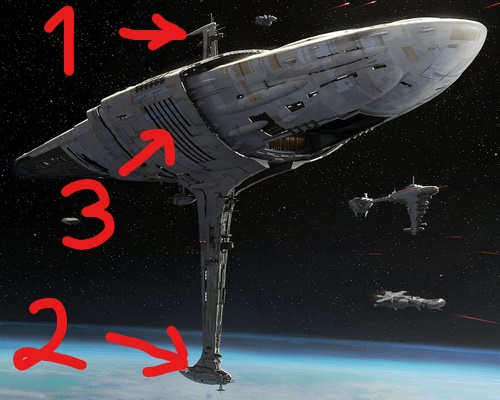 Once all subsystems are taken down, the ship is already on its last leg. Fire into the weak points of the cruiser and destroy it for the win. Here are some quick tips to make this phase run smoothly:

And that’s it. That’s the cut-and-dry, no-nonsense, foolproof plan for destroying the Rebels in your conquest to keeping the Galaxy a safe place to live. Do keep this to ourselves, because this all applies to them as well. Should they get a hold of it, the consequences could be losing a good 30% of your rank because the ranking system is flawed right out of the box even though several games have implemented the same one for years now.

That’s all we are sharing today in STAR WARS™: Squadrons Fleet Battle Guide, if there are anything you want to add please feel free to leave a comment below and we’ll see you soon.