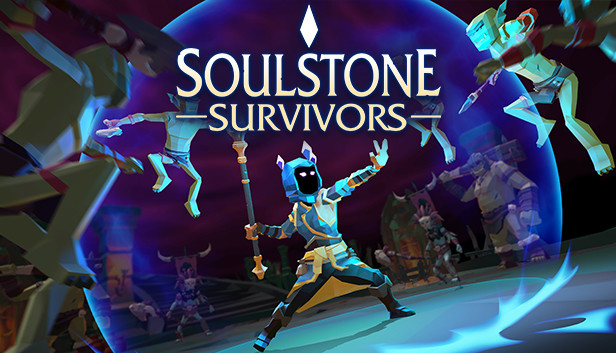 For Soulstone Survivors players who are trying to achieve the last couple speedrun achievements, this guide will help you out.

I want to start by mentioning that this entire build comes from Brokenz Plays on YouTube, check out his video here to see it in action:
I had done sub 8 minutes (barely) using necromancer before this, but my first run using this build ended up sub 7, and with some effort and luck i pushed to sub 6. It does require you to have progressed a bit in the game, one of the optimal abilities requires unlocking all characters and another requires a sub-9 minute run to be completed. Here is the best run i was able to manage with this setup: 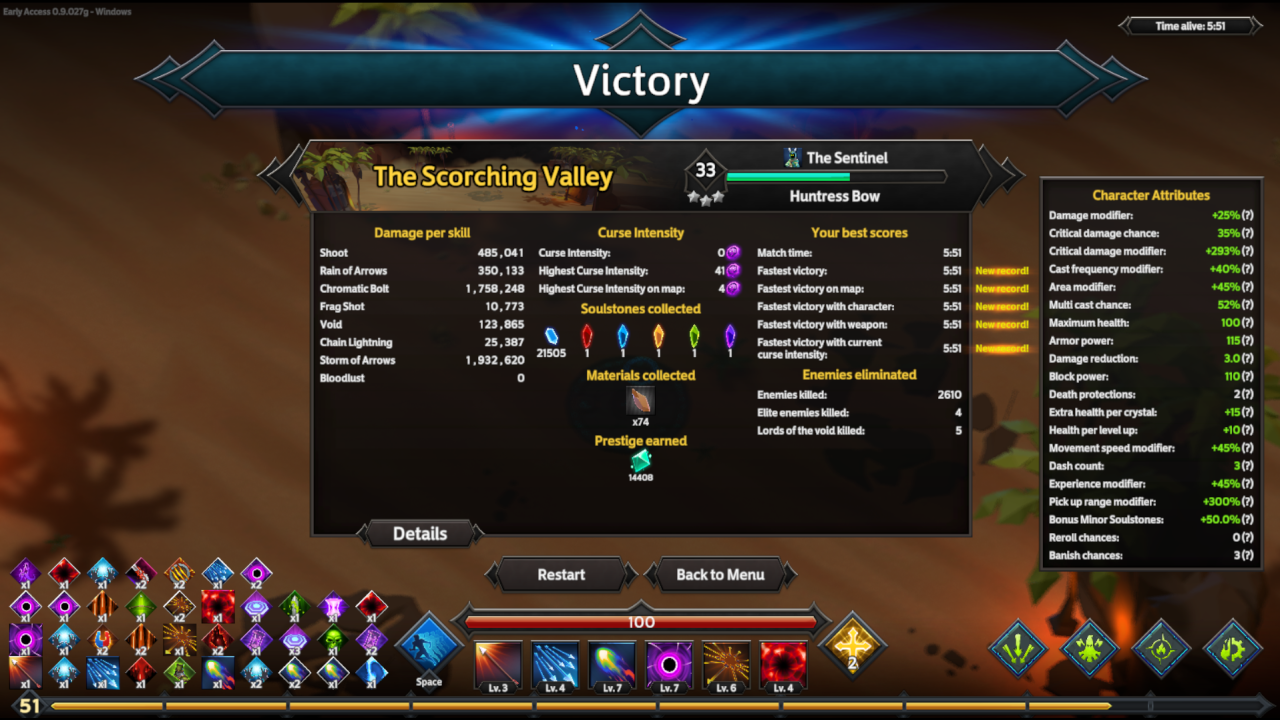 Shoot and Rain of Arrows: The two abilities tied to sentinel’s first weapon. If i had prestiged enough to unlock ricochet i think that would work better than RoA, but havent tested it.Void: MOST IMPORTANT ABILITY!!!!!!! This will pull enemies from offscreen, indirectly increasing spawn rate by bringing them into your killzone faster. Other abilities CAN hit stuff offscreen but this is far more consistent

Chromatic Bolt: Unlocked after you have purchased every currently unlockable character (there are 14 i believe). This does its own thing and will frequently launch offscreen to kill enemies there that may be outside your Void radius. Best part about it is its homing, will always hit its targets. I think area increases how far it travels before expiring but havent tested it too much.

Storm of Arrows: Another offscreen murder machine, very quickly becomes insane with cast speed + multicast, it beat out chromatic bolt in damage on my fastest run.

Bloodlust: Cast speed is king, this ability definitely carries its weight. No need for a Sixth damaging skill to be honest, CB and SoA do plenty of work on their own.

I’ll just preface this by saying one thing…… cast speed and aoe are king. Always take them over damage, provided you have some damage multiplying runes it shouldnt be an issue and most everything should be one or two shot, with bosses dying in a few seconds.

1.) Area of Effect: Most important for void, but it’s just generally really good at increasing your chance to hit distant enemies. Also, like i mentioned above, I believe it makes Chromatic Bolt travel further (and thus hit more enemies) before it expires.

2.) Multicast: Just as effective as cast frequency, except this scales much harder (especially with a particular rune that i will talk about later). More casts = more hits = more dead enemies.

3.) Cast frequency: Same as above, hitting more is gonna be better than hitting harder when everything dies instantly anyways

Everything else is pretty much irrelevant. In terms of debuffs i would value Fragility over others (maybe doom as well) just to make bosses a bit smoother.

These will make everything much easier, mostly because the modifiers on damage runes are multiplicative, not additive like most damage sources in the game. Most of the damage runes are unlocked naturally as you play the game, but i’ll detail the unlock requirements as well:

1.) Purity: Increases damage by 50%, but reduced by 5% per different type of negative effect on the target (to clarify, from what i can tell, the empowered versions of effects, i.e. melting for burning, weakness for fragility, do not count separately for this.) Unlocked after defeating a total of 200000 enemies. I used Focus Fire in my run, which in hindsight was a mistake because of the reduced area, i probably could have pushed it a bit lower without it but meh (Focus Fire adds 40% damage at the cost of 20% area of effect, unlocked by defeating 2000 elite enemies)

READ:  Soulstone Survivors Scent of Blood is Decadent and Depraved

2.) Executioner: Enemies take 5% extra damage per different type of negative effect on the target. Unlocked by winning a match with all curses up to and including tier IV enabled on Dungeon of Despair (map 5). This cancels out the negative effect of purity and then some since, again, all of these are multiplicative.

3.) Generalist: You deal 5% extra damage per each different type included in your currently active skills. Unlocked by defeating 400 lords of the void. This is extremely effective with Chromatic Bolt because it includes every damage type in its tags, contributing 12 stacks to the buff by itself. include the tags from our other skills and it adds up somewhere on the order of 80% increased damage.

4.) Multicast Mastery: Increases the chance for long chains of multicasts to happen. Unlocked by winning a match with all curses up to and including tier IV enabled on the Caves of Dhal Zhog (map 3). Now then, what does this mean. We don’t have any numbers here and i haven’t done enough testing to say for sure, but the general idea is that multicast can trigger itself. Spells triggered by multicast have a (greatly reduced) chance to trigger multicast again, and this rune increases that chance. Basically you can end up triggering 4,5,6 casts from a single one with less than a few hundred multicast %. Again, i don’t know the exact values but it did seem noticable compared to playing without it.

Now let’s briefly talk about gameplay. Really it’s quite simple…. pick a corner, any corner will do, and pretend its your best friend you havent seen in forever. just give it a big old hug while your arrows and spells take care of everything around you. Corners indirectly increase spawn rate since it forces enemies to spawn closer to you. You’ll want to position yourself not directly against the wall but a little bit away from it so enemies can spawn between you and the wall as well. Other than that just let the autocasting do its thing. Hope this helps you all with your runs 🙂
READ:  Soulstone Survivors Endless Cycle 5-6 Arcane Weaver

That’s all we are sharing today in Soulstone Survivors 7 Minute Speed Run Guide, if you have anything to add, please feel free to leave a comment below, you can also read the original article here, all the credits goes to the original author lfmasked