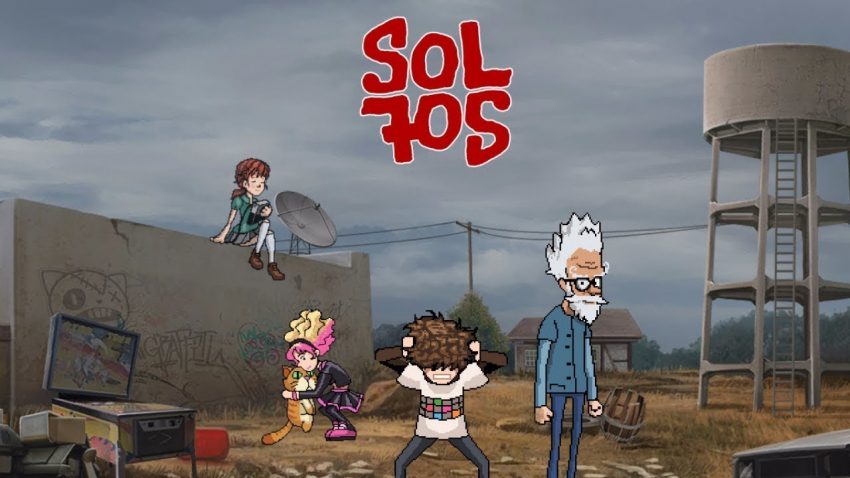 For Sol 705 players. this guide is here to help if you get stuck with Sol 705. It is possible to complete the game very quickly if you know what you are doing, so you should try it on your own first.

You may wish to enable “hints” in the main menu. This is a bit of a mistranslation. Enabling hints does not give you hints, but it does let you highlight hotspots with spacebar.

Leave through the window going down and pick up the pot. Take the key out of the pot in the inventory and reenter the house.

Climb out of the window, going up this time, and grab the branch.

Leave through the window going down and pick up the pot a second time.

Reenter the house and use the pot on the leak. Grab the broken step.

Climb out of the window, going up, and plug the hole with the board.

Take the case. Open the packet in your inventory. Use the whistle on the dog.

For this puzzle, do:
RIGHT RIGHT to get the dog’s attention, followed by
RIGHT LEFT to make him jump down.

You must now pick up the scattered letters scattered randomly at the bottom of the screen. If given a dialogue choice, your answer doesn’t matter. Some of them are well hidden. There is also a BUG you can pick up and eat… yay?

Use the LENS in the telescope and click the icon to focus.

Use the yoyo on the boy by the wall and bounce on the tires. Go back and exit left this time.

Feel free to talk to the kid here and the lady in the concession shop. Go left again.

Try to pick up the seagull and then talk to the girls here until it flies away. Use the papers on the stool and have a seat. Pick up the ball when it falls.

Go left again. Talk to your brother here and pick up the books.

Go left again. Pick up the books. Pile all 3 sets of books on the return and grab the ball.

Bring the ball back to the blonde girl. Go right and enter the hole.

Pick up the pipe and then click the ceiling several times until glass shatters. Pick up the shards of glass and open the box on the right. Use the crucifix on the light to charge the glow.
Exit left and slide the boxes at the end of the tunnel to get to a classroom.

Grab the jar, and when the chair breaks, grab the jar again as well as the washers.

Leave through the window and go back to the concession stand.

Exit right and go through the door to get a key.

Return to where your brother is and use the key to get to a service room. Cut the power here and you will be back at the stand. Use the sticky rocket on the wire. Go back and turn the power back on.

Grab the candy and leave through the hole!

Take the robot. Exit right, and then north.Kick the door here a few times and then talk to Lena until she disappears.

Leave and enter the bike shop. Take the PLIERS and SCREWDRIVER. Use the screwdriver on the tape. Combine the magnet with your yoyo and use it on the oil can to get the OIL CAN as well.

Leave, and use the screwdriver on the bike for a COG.

Go left and kick the green door on the right. Talk to Lena again and agree to get her cat back.

Look at the posters on the back wall and write down two phone numbers. Meeno will say he is thirsty, but stay away from water because it will erase your phone numbers. Exit left and then right.

Use the yoyo in your inventory to split out all of the items. Use your yoyo on the cat and then use
your pliers on the bike to sharpen them. Grab two more phone numbers from the posters here as well. Exit north.

Grab the trash. Use the wire cutters on both holes. Grab both wires that fall. Use a wire on the left hole to repair it.

Go back up the ladder and exit left twice. Grab the ball here and then use your plastic spoon on the digging man for a gear. Use the wire on the statue and enter the building.

Grab the hook here and then hit the fallen yellow sign for two more phone numbers.

Go back to the area in front of the school and combine the magnet, yoyo, and hook for a fishing rod. Use this on the toxic puddle for a fish on a board. Separate these items in your inventory.

Go back to the newsstand and use the fish on the cat here. Bring the cat to Lena in the area with the green fence.

In the interlude, click the icon in the lower left in order to understand the aliens.

Exit left and climb the telephone tower. Jump right to the leaning pole. Dial all the numbers, saving the one called Marco Pogo for last.

Use your retainer on the aliens and exit through the hole.

Grab the book here and use it from your inventory.

PAPER PLANE PUZZLE.
Starting with a flat sheet, click the top button four times and then click the soldier. The soldier should run away.

Click the air pump several times in quick succession until the submarine robot surfaces. Use the control panel and then enter the sub.

Grab the air pump and the deflated ball from the bottom of the screen. Combine them. Use the soccer ball on the mean fish.

Open the cabin. Investigate the plans.

That’s all we are sharing today in Sol 705 Full Walkthrough and Achievements Guide, if there are anything you want to add please feel free to leave a comment below and we’ll see you soon.