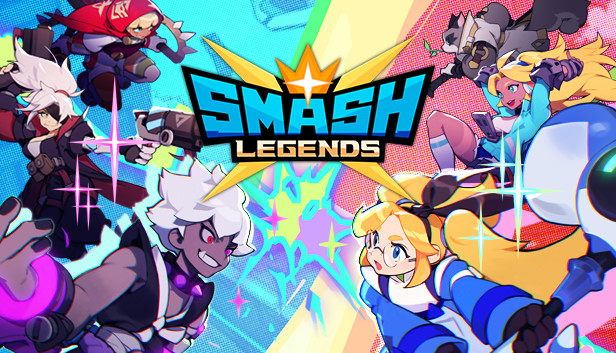 For Smash Legends players, this is a guide that explain all those game modes in game, and will provides tips and tricks for the different game modes as well.

The different game modes
In SMASH LEGENDS there are the following game modes (as of March 2021);

These are explained in more detail in the following sections.

In the Domination mode, the objective is to capture a point in the middle of the map and defend it against the opponent for as long as possible. The team that reaches 4 points first or has the most points at the end of the time wins the match. If there is a tie in points, there is a draw without overtime.

It should be noted that control of the point does not change until all players of the defending team leave the point.
This makes it even more important to hit as many opponents as possible at the same time with strong knockback or even ultimate abilities in order to quickly gain control of the point.
Another obvious as well as effective tip is to secure control of the point right at the beginning. This works very well with mobile characters like Red or Cindy, who bring mobility via their abilities.

Also, various items spawn on the item platforms, which can be healing potions, ult skill boosts, or even bombs.
The bombs in particular are a really powerful item when taking over, as they deal area damage and blast away any enemies they hit a solid distance.

As you already know from other Battle Royales like Fortnite, PUBG, Realm Royale etc., the goal here is to survive within the ever-shrinking zone and collect power points (so-called candies). You can get them either from crates that spawn on the map or from defeated enemies.

The wall of fire does a lot of damage and healing potions are very limited. Since many characters have strong knockback abilities, it is advisable to throw enemies into the wall of fire to deal extra damage to them.

I would recommend Peter, Red and Cindy here, as these characters can destroy the crates very quickly and thus get their candies quite easily to defeat their opponents afterwards.

Off to the 1 against 1!
In Duel, you fight in a 1 vs. 1 format, and whoever knocks their opponent out of the arena 3 times first, gets the victory.

As in all other modes, healing options are very limited, often there is only one place on the map where a healing potion appears.
Make sure you grab the healing potion and you’ll have a big advantage over your opponent.

Off to the field – literally!
In Harvest mode, fruits appear on the battlefield that need to be destroyed and collected.
Golden fruits give more points.

Fighting in PvP is rather secondary here, since you only want to get the fruits. All you have to do is throw the enemies far enough away with a strong blow, so that you can collect the fruits in peace of mind.
Team Deathmatch
Team Deathmatch is a 3-on-3 format in which players smash each other’s skulls until time runs out or one team reaches 10 points.
One point is awarded for each opponent knocked down.

This mode is probably the most team-dependent, as each death is worth a point and thus the weakest link of a team often decides who comes out victorious.

Strong characters for this are those who can throw multiple opponents out of the arena in one hit to get multiple points in one hit.

In Crown Guard, everyone becomes a king once:
The idea is that each player receives the “crown” once, and it is given to the next player upon death.
The crown increases the size of the character currently wearing it and increases the damage dealt as well as the health points.
The game ends once all players on a team have been defeated while they had the crown or time runs out.

Since healing potions always restore a percentage of the maximum life, it is advisable to use the potions as the crown owner or leave them to the crown owner.
The crown owner should stay as close as possible to his own base (the re-entry point of his own team), because here the path for defeated enemies is as long as possible and the one for re-entering team members is as short as possible.

Another important fact is that the crown owner (when he gets the crown) automatically gets a fully charged ultimate ability.

Another mistake that many players make is to only stay with the crown owner as a non crown owner.
It is much more effective to leave your crown owner alone in the base and rather chase the enemy crown to take the lead first. Once you have a lead, you can still defend your own crown as the opponents are under pressure.

That’s all we are sharing today in Smash Legends Guide to the Different Game Modes, if you have anything to add, please feel free to leave a comment below, and we’ll see you soon.
Credit to Undergrinder and leinad13