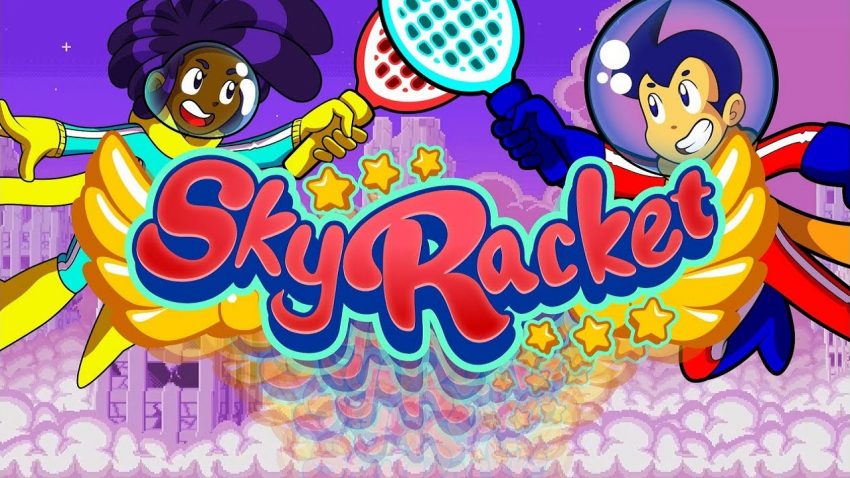 Hello fellow Sky Racket players! We are doing a guide on how to beat all achievements through video footage. This is still a work in progress so we will be putting new content as we beat the game. Any questions you might have please tell us and we will try to help you the best we can!

– Every time you’re trying to achieve a high combo, it’s always good to have one thing in mind: Don’t get hit! Taking damage restarts your combo. Considering each area is short, it’s best to do it from the very start.
Combo achievements and No Damage challenges go in hand-to-hand together.– When you have to hit objects to spawn flying squirrels, always hit those objects from below. When doing so, the squirrels will spawn from above, usually one above and two for each side. This is the best way to release those cuties and still have time / space to avoid or hit them.

Float like a butterfly – Clear Set 1-1 without getting hit

Cloudy with a chance of Rackets – Clear Set 1-2

Fly like an Eagle – Clear Set 1-2 without getting hit

Glide like a Seagull – Defeat Platanorr without getting hit

Just wing it – Defeat Platanorr without striking any balls

Do you have enough potassium to defeat the very first boss? I’m sure you do, and Platanorr becomes extremely easier if you take a full grown pet, as can be seen in the video.
The attacks are simple and after a few tries they become predictable. Watch out for the tentacle-like attacks and use the extra bananas for more damage, but don’t take unnecessary risks.

Just wing it achievement is much harder, and your pet can be used, since its attack doesn’t count as normal projectiles. If not, focus on using the bananas in stagger attacks. Hitting multiple bananas creates an extra damage combo. If you’re having issues, just hit them one at a time.
Special attention to when the spacial spikes appear, just play more defensive and wait for openings and don’t rush.

Welcome to the jungle – Clear Set 2-1

Flutter like a Hummingbird – Clear Set 2-1 without getting hit

My personal space – Avoid all Tanukis on set 2-1

Aren’t those flying squirrels cute? Yes, they are, but to avoid them, follow the steps on the video. Some areas are tricky, as seen at 1:03. Just focus on those squirrels falling from above. Don’t worry too much about taking a hit or two, as long as you see them falling, you can plan your space.
Another intense moment at 1:39 where tons of squirrels fall from above. But check closely in the video, as we can avoid a huge amount of them by rolling to the left and hitting the last 2 or 3 squirrels.

As for the final boss, try your best to hit the falling brown spikes from below. Hitting them from bellow splits the squirrels into three, and if you stay below you can just hit one and avoid the other two. This will grant you a safe space from possible grabs, and still throw one to damage the boss. It’s highly recommended that you take a full grown pet, to deal a massive amount of damage!

Winners don’t use spores! – Avoid all spores on Set 2-2

Level 2-2 have one major challenge, which is avoiding the mushroom spores. We all know drugs are bad, so what’s the best way to avoid them? Easy, first don’t take candy from strangers… errr, I mean, spores! Don’t take any spores. Once they stuck to a place their effect will last, even when the dust remains. Make sure you get your timings right and be patient. Don’t rush and wait for the effect to completely disappear.

For the final boss the challenge is much higher… But there’s a trick you can use. Every time you feel you can’t avoid the spikes and the spores, go for the spikes. I-frames make you resistant to the spores. As long as the character takes damage and gets those 2 seconds of invincibility for recovering, mushroom spores will not affect you.

If you don’t want to play dirty, use the roll and strike the mushroom with your pet’s attack. If you don’t have one, avoid all the spores and wait for the perfect opportunity to hit the brown spikes from below, like previously said in the General Tips.

Soar like a Pidgeon – Clear Set 2-2 without getting hit

Rush like a Swallow – Defeat Luchanuki without getting hit

Defeating the Luchanuki without taking damage, is like moving from one house to another, with all the furniture on your back. Luckily, we only have to deal with chairs!
First, take your pet with you and if it’s a full grown one you can deal a great damage right at the start. If you want to hit the chairs, hit them from below. Like specified in General Tips. Being dragged by those cute rodents might look cool, but Luchanuki is fast and you need to roll.

When the boss creates two duplicates, as seen at 0:26, two of them are fake, but one is the real Luchanuki. Try to hit at least one, and thus the equation becomes much simpler. Luchanuki sometimes attacks with a flying kick as can be seen at 0:52. Other times it doesn’t. Either way, just keep rolling to have the advantage of avoiding him if and when the time comes.

When he stars spawning, he’s twice as hard, but make sure to keep a safe space and do not take risks. At this phase Luchanuki will dash against you, sometimes even twice in a row. Just be patient and go for the easier balls to projectile. If you still have your pet, use it for mass damage.

If you like to play risky, you can keep a flying squirrel grabbed on you for a while, and kick it at the right time. This is dangerous and not recommended, unless you like to live on the edge! Risky but can be rewarding if luck is on your side.

Drift like a Macaw – Clear Set 3-1 without getting hit

Racket-Signal – Destroy all spotlights on Set 3-1

The Racket is undeterred! – Destroy 15 barriers on Set 3-2

Shoot like a Parakeet – Clear Set 3-2 without getting hit

I am the night! – Avoid all spotlights while fighting MegaFoxorah

Swoop like a Bee-Eater – Defeat MegaFoxorah without getting hit

You are not alone – Obtained after beating level 1-1, in the world map

The power of friendship – Obtained after beating level 2-1, in the world map

The friends we make along the way – Obtained after beating level 3-1, in the world map
Written by Anezka890 and Tiago Rocha