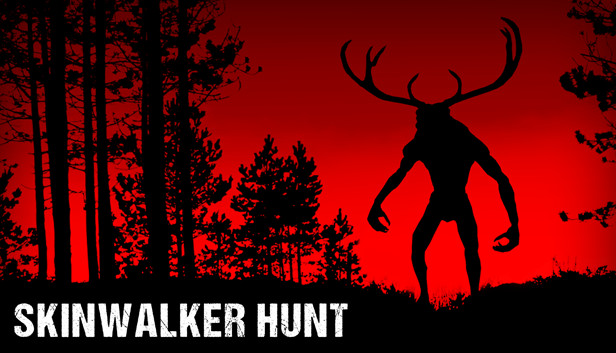 For Skinwalker Hunt player, this a quick guide to pass on a few simple things I learned in the game that helped me complete the first forest.

I will go over a few things that may help some out on their first game. I will cover weapons, items, locations of interest, points of interest and the Skinwalker itself.

Once you start your game you will start at a random point on the map. It is different every time you play.

There will be an ammo box with you which you can use to get some extra rifle rounds before heading out to find your first location. This ammo box contains an unlimited amount of ammo. You can return to this as much as you wish. You will find ammo around the map. However, these boxes are one time use so keep that in mind.

Familiarise yourself with the menus, the map.

Pressing TAB opens up the build/craft/place menu. You can place a variety of items to help you, I will go over this in more detail a little bit later.

Pressing Q opens the map. You can place your own marker on it by simply clicking on it and a display marker will appear on your compass at the top of your screen.

The menu also includes items such as food and medkits. You can use them from this interface.

Hunting Rifle
You will start off with a hunting rifle, you can currently hold up to 25 rounds total.

A Native American Axe
You will start off with one in your inventory, cycle between it and your rifle by pressing the 1 and 2 keys.

Shotgun
You will not start off with this. However, it can be found in a couple of random spots in the world. The ammo for it can only be found and cannot be resupplied in the starting ammo crate.

Bear Trap
Placing a bear trap will use a bear trap and one piece of meat. Placing these around the map is vital to hunt the Skinwalker. You can see their radius on the map, the yellow circle will show the radius that the Skinwalker will be attracted to the bait. Once the Skinwalker steps on it, you will be able to interact with the now broken trap and get a rough location of where on the map it is or which direction it is running. Note: The Skinwalker will not go for the trap if you are in the radius, you can see this on the map. Once you are out of the zone the yellow circle will rotate signalling it is working. Once the bait has been taken it will give you a signal on the map and a notification. You can find bear traps around the map.

READ:  Skinwalker Hunt How to Get Weird Skull Achievement

Meat
Meat can be used to bait traps but you can also cook it on a fire to make food which heals you over time. Meat can be harvested from animals found around the map. These include wolves, bears, deer, boars and snakes.

Food
Can be used to heal the player over time. Food can be found around the map or made on a fire using 1 meat.

Flares
Flares can be used to stop a wild animal or The Skinwalker attacking you, you can throw them by pressing F. They can be found around the map.

Medkits
Medkits can heal the player to full health, they can only be found around the map. Use them wisely.

Totems
Totems can be placed at locations around the map. They are by far one of the most important things in the game and are vital in hunting. Once placed, the totems can be used to save your hunting progress. More importantly, they are able to notify the player when the Skinwalker is in radius of a totem. They can also be expanded by consuming 50hp to increase their radius or shrunk for some HP.

There are an assortment of random items you can find around the map that will help with your hunt.

For instance:
A flak jacket can increase your max ammo and carry capacity of food and meat.
Hiking Boots can decrease fall damage.

They can be found randomly at any location around the map.

You will find an assortment of locations in game. The location of these will stay the same each game. However, the loot that can be recovered will be random each time you play a new game.

Sometimes you may find backpacks at these sites which can be searched for supplies.

These places can be found by sticking to trails but some may be found blindly walking through the forest.

There are certain points of interest you can use to your advantage.

You will be able to find green herbs in the world that can heal you fully by interacting with them.

You can find Skinwalker Totems which can be destroyed to lure the creature to you.

There will be supernatural events also. You may come across a ghost in game which will grant you an increase in maximum health. Once you get closer to it, you will start to become cold and will need to make a bonfire to warm yourself up.

You will also encounter a worshipper of The Skinwalker who can levitate around in a fight and also pull a player back if they try climbing on something or get too far from him. Killing him grants a health regen (1 per 7 seconds) or An increase in stamina as well as a stamina passive ability.

The objective of the game is to kill The Skinwalker. Once it has been defeated the game will end and you will unlock the next map. Below are some tips and hints that made my game easier.

My strategy for this is all about patience and setting up traps.

Using baited bear traps in strategic locations such as open fields to lure the prey. You can pick bear traps back up again.

READ:  Skinwalker Hunt How to Get Weird Skull Achievement

Gathering meat to create meat and making food to heal myself, saving the valuable medkits. The ability to heal without using these makes it easy to upgrade your totems and increase their radius. You can also heal from green herbs.

With traps placed and your totems placed in good locations you should be getting notifications of where The Skinwalker is. Making the hunt much easier for you.

Dogs can lead you to the Skinwalker as they run towards them. However, the more damaged The Skinwalker is it can mimic a dog and once close will attack you.

All wild animals will attack you, except dogs (unless it’s The Skinwalker) So don’t feel too bad shooting them, you need the meat anyway for your traps and food.

Keep an eye on the birds. They can alert you to movement such as wild animals and even The Skinwalker. At first I didn’t notice but near the end of it. I was able to visibly see birds far in the distance flying away in my direction and see The Skinwalker sprinting towards me.

Fighting the Skinwalker with a clear line of sight is recommended. That and if you can get on a hill to see it coming, you will be able to optimise the amount of times you can shoot at it as it runs away.

That’s all we are sharing today in Skinwalker Hunt Beginners Guide on How to Hunt the Skinwalker, if you have anything to add, please feel free to leave a comment below, and we’ll see you soon.
Credit to Zeruel