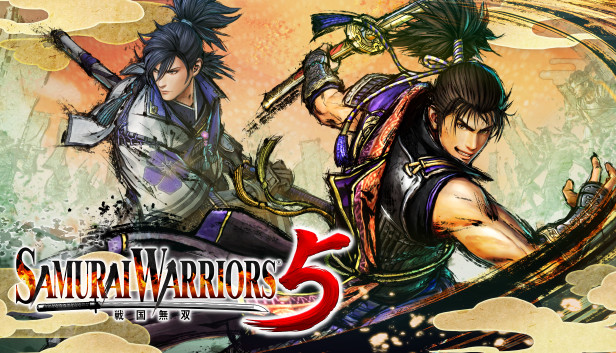 For SAMURAI WARRIORS 5 players, this is a guide of Objectives in game, which provides a list of all objectives, and explain how to achievement them, let’s check it out.

Raid on the Imagawa 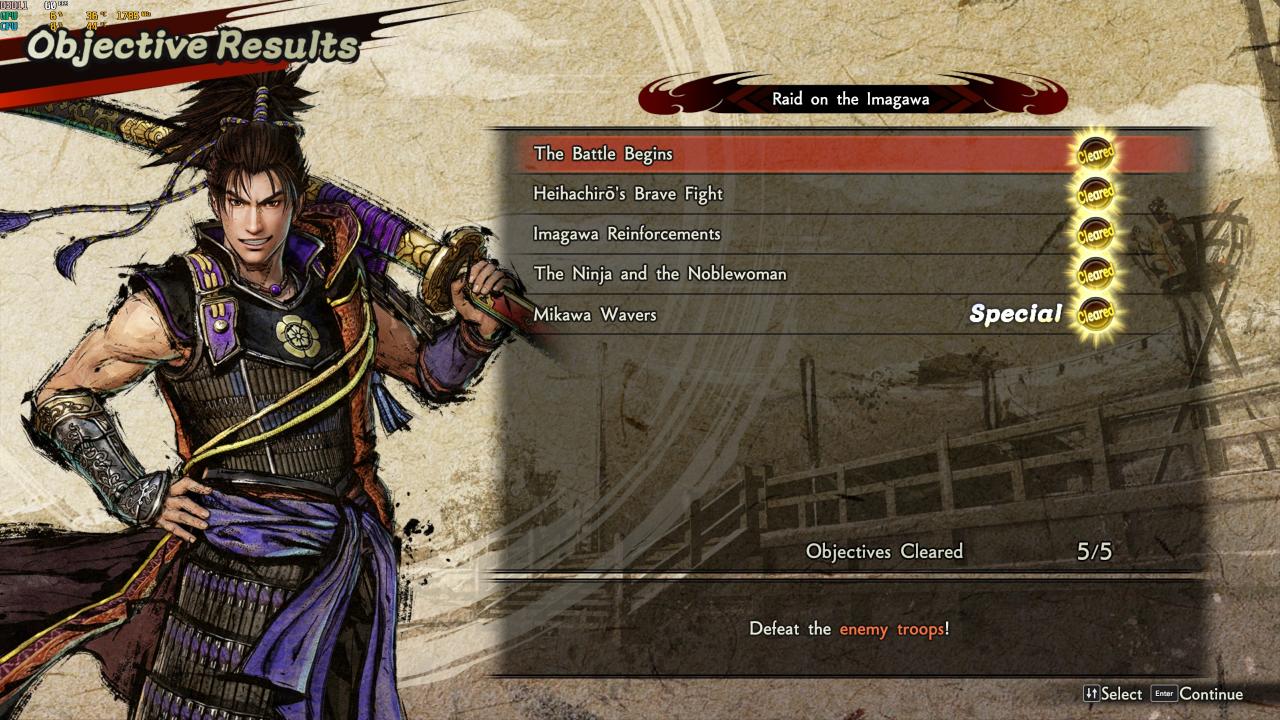 Ninja and the Noblewoman 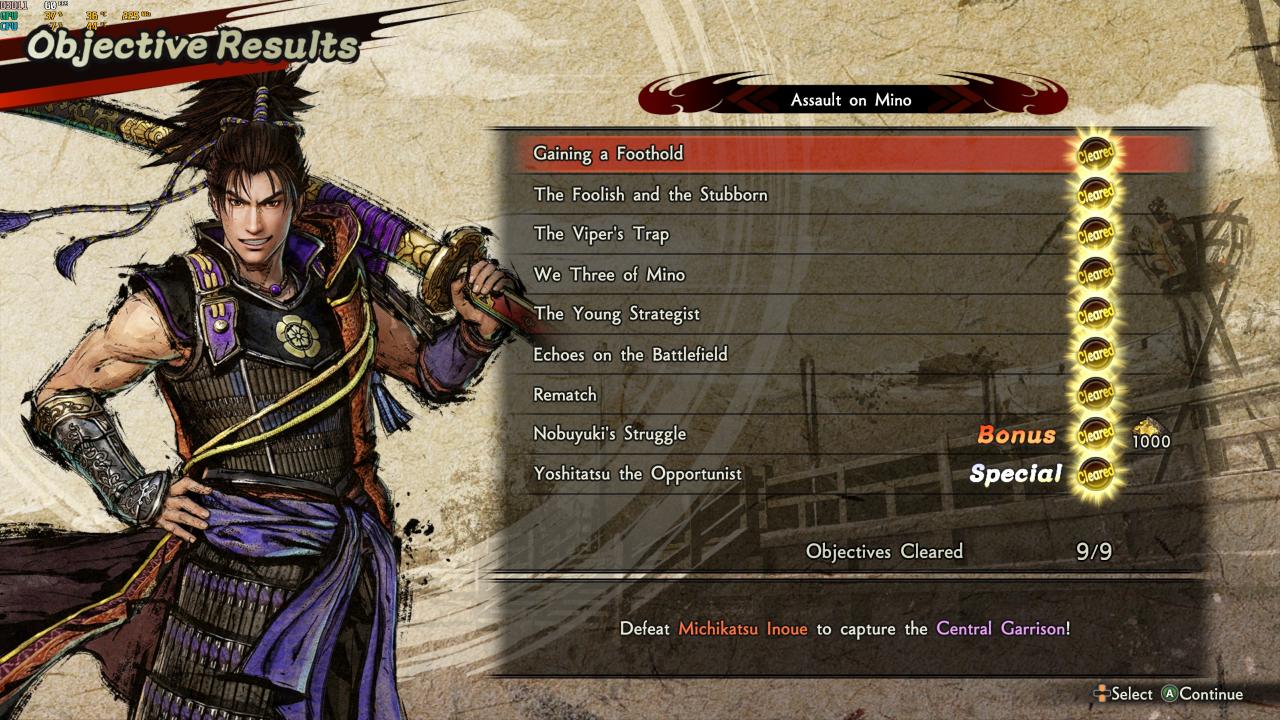 The Foolish and the Stubborn

We Three of Mino

Echoes on the Battlefield 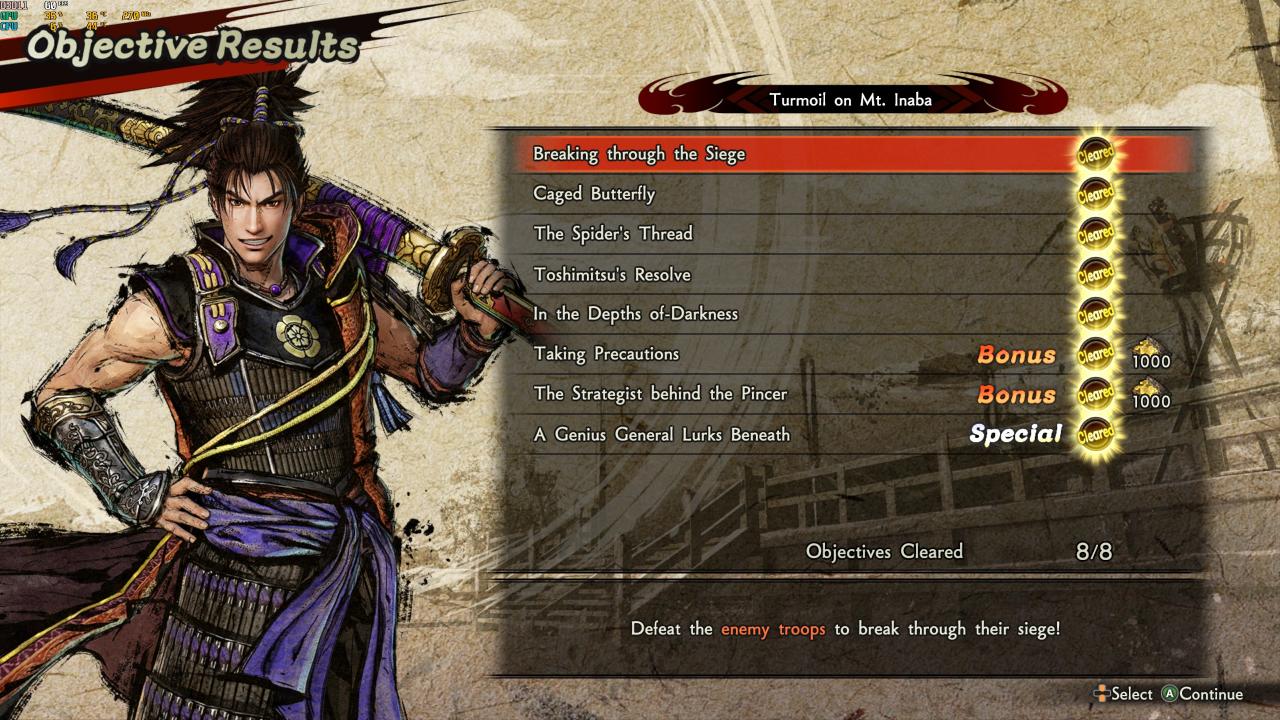 Breaking through the Siege

The Strategist behind the Pincer

A Genius General Lurks Beneath 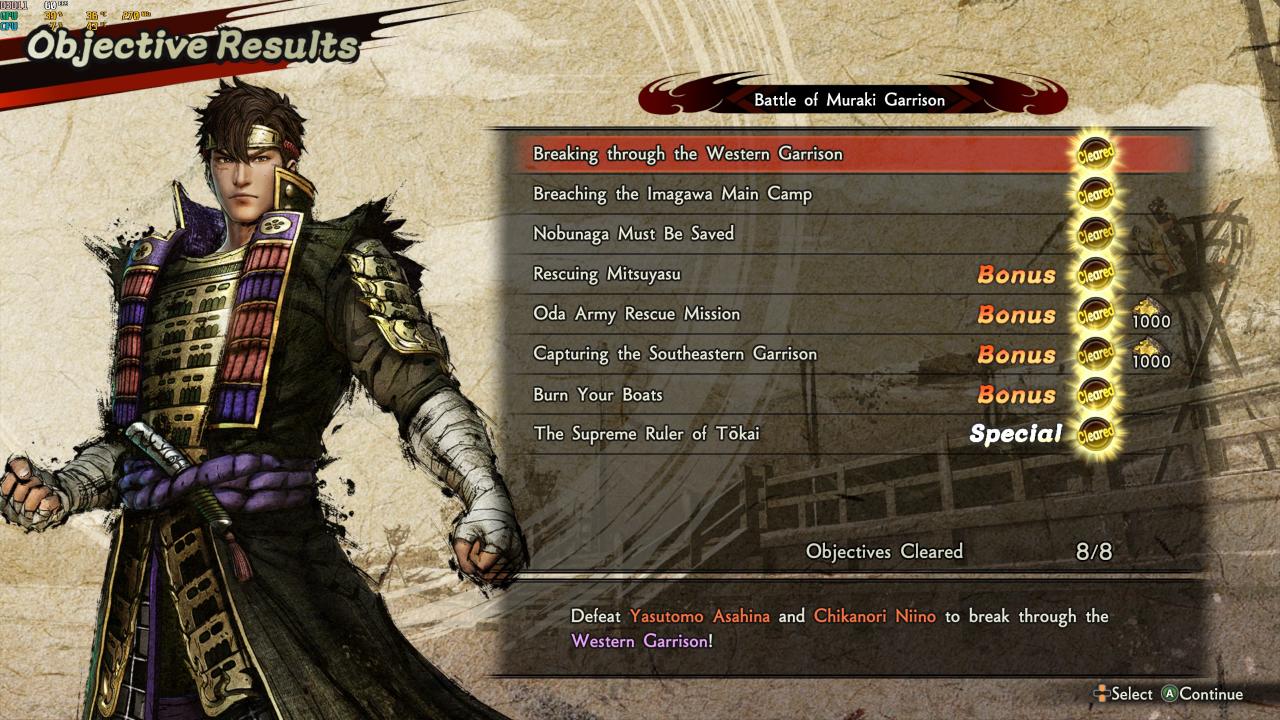 Breaking through the Western Garrison

Nobunaga Must Be Saved

The Supreme Ruler of Tokai 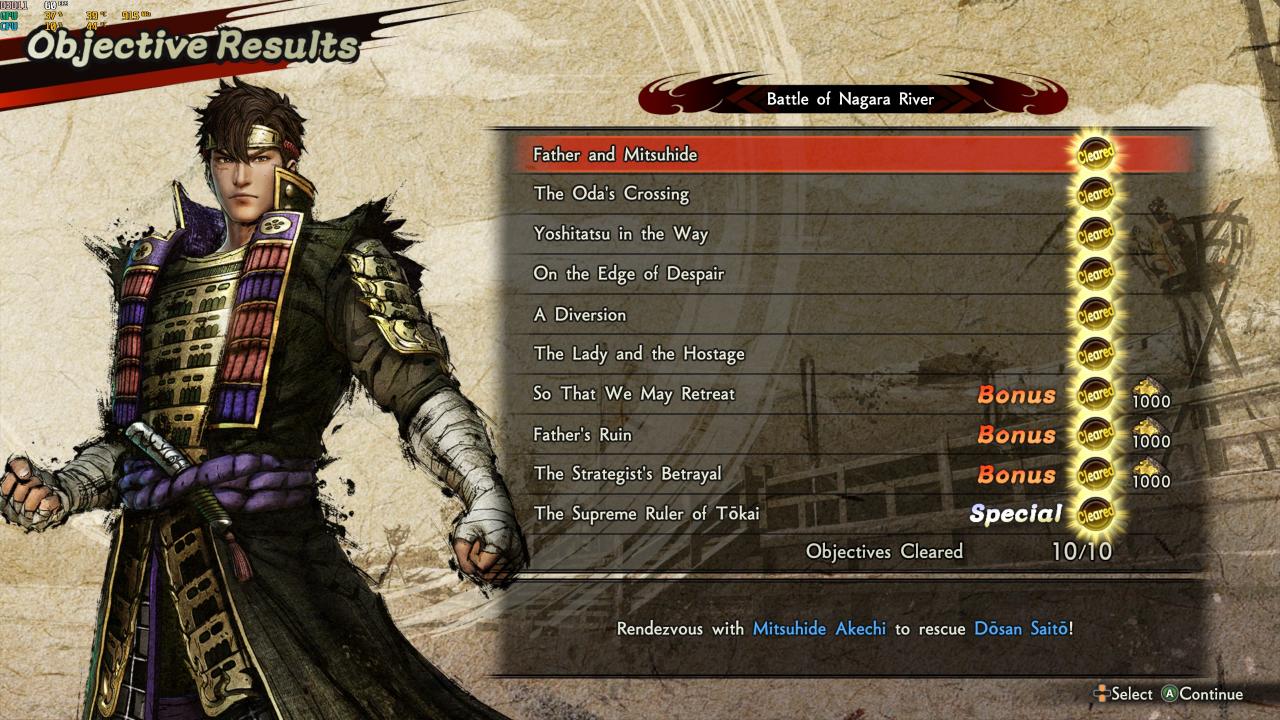 On the Edge of Despair

The Lady and the Hostage

So That We May Retreat

The Supreme Ruler of Tokai 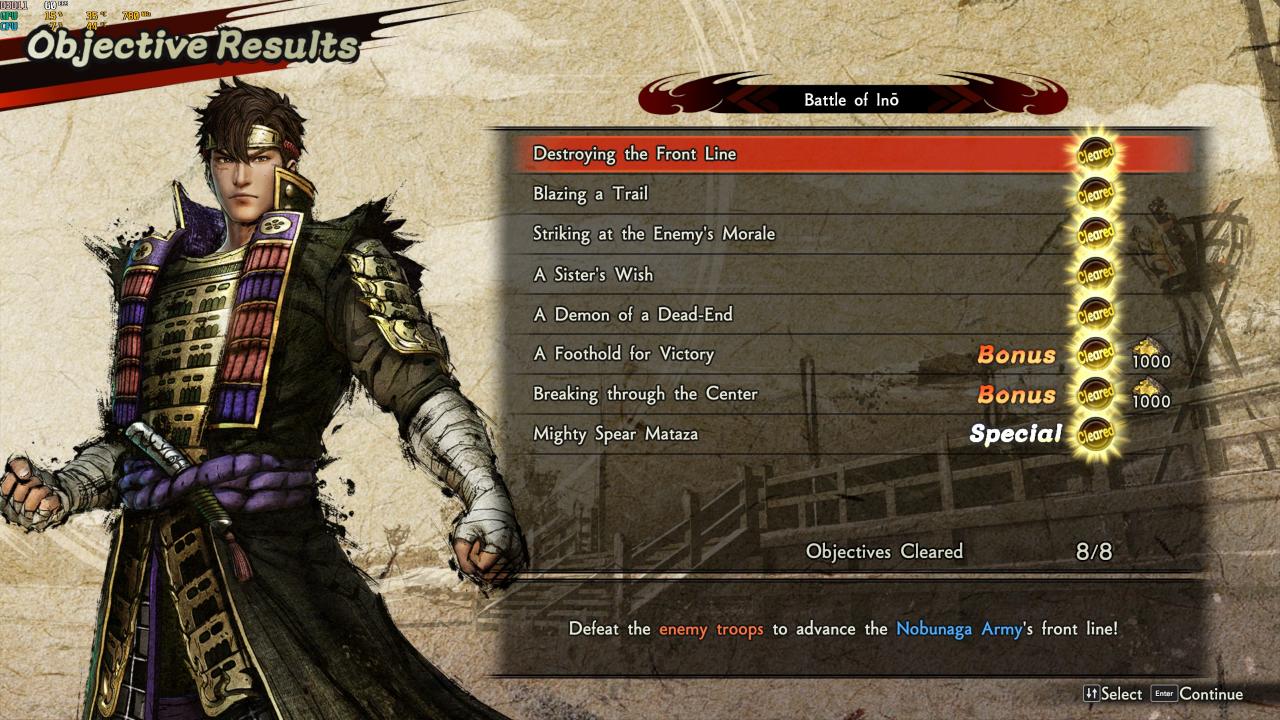 Striking at the Enemy’s Morale

Demon of a Dead End

A Foothold for Victory

Breaking through the Center

A Foothold for Victory

Where, Oh Where Is The Back Road? 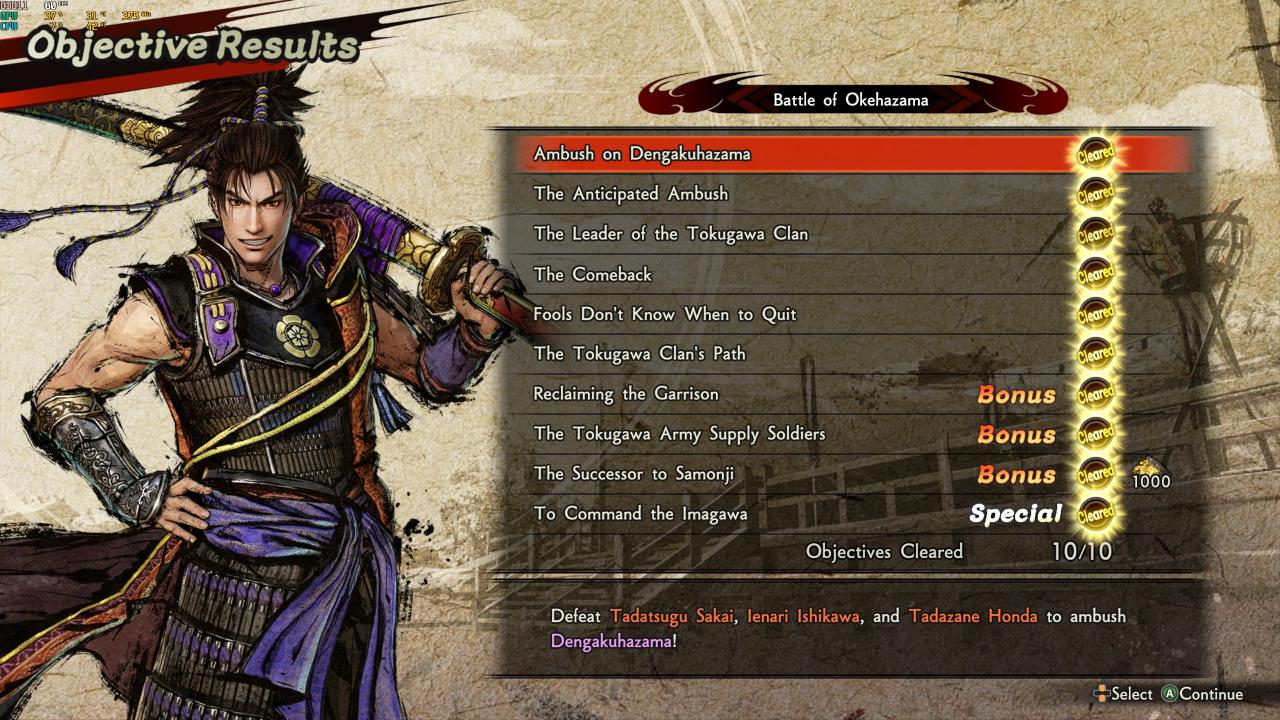 The Leader of the Tokugawa Clan

Fools Don’t Know When To Quit

To Command the Imagawa 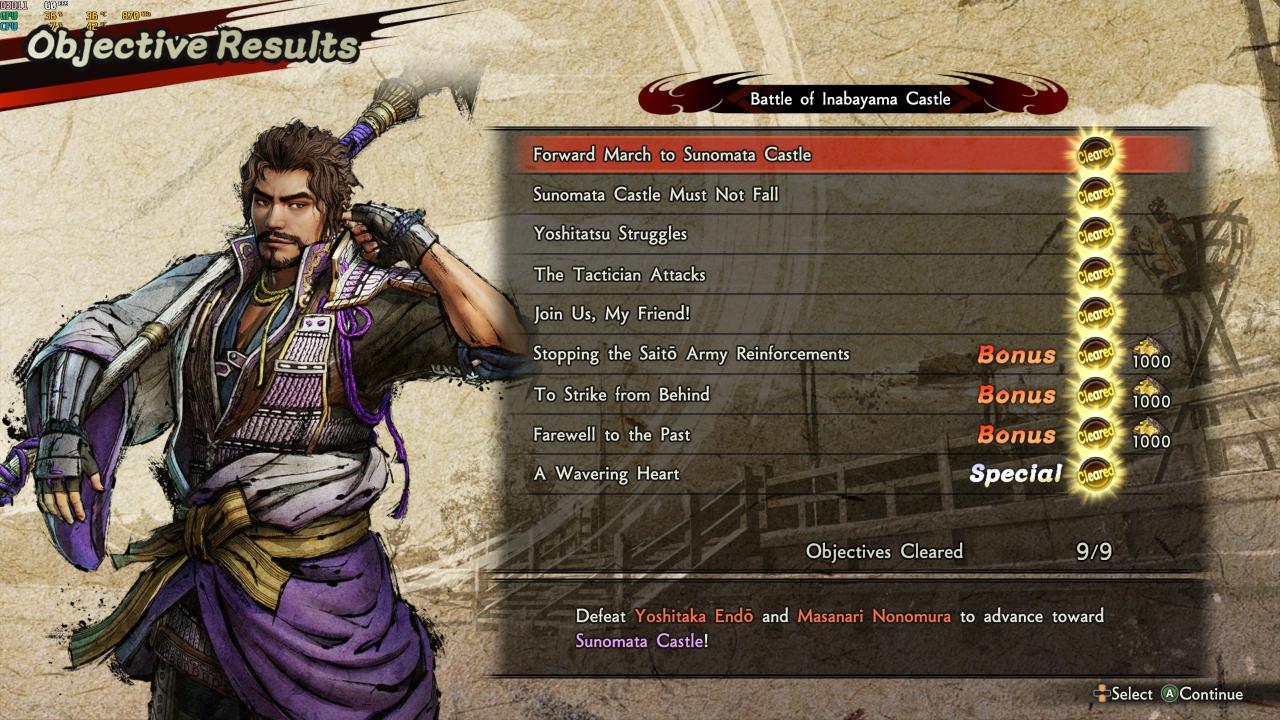 Sunomata Castle Must Not Fall

Join Us, My Friend

To Strike From Behind

Farewell to the Past 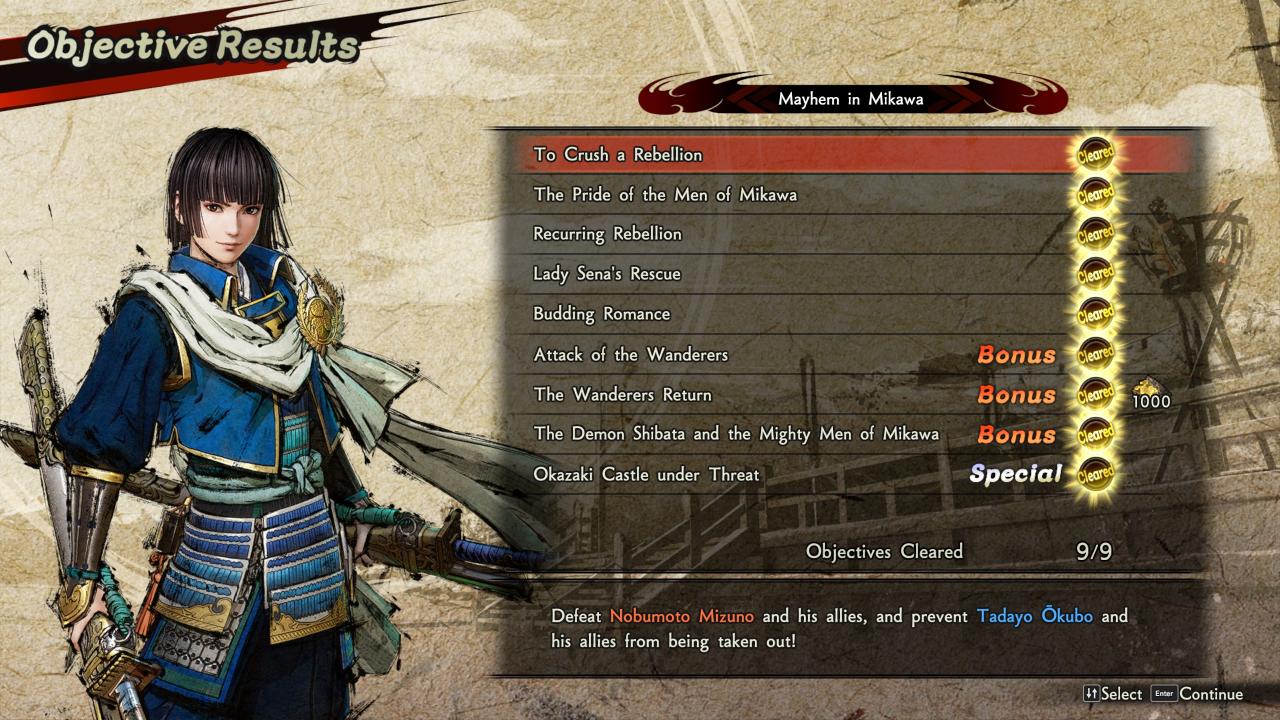 To Crush A Rebellion

The Pride of the Men OF Mikawa

Attack of the Wanderers

The Demon Shibata and the Mighty Men OF Mikawa 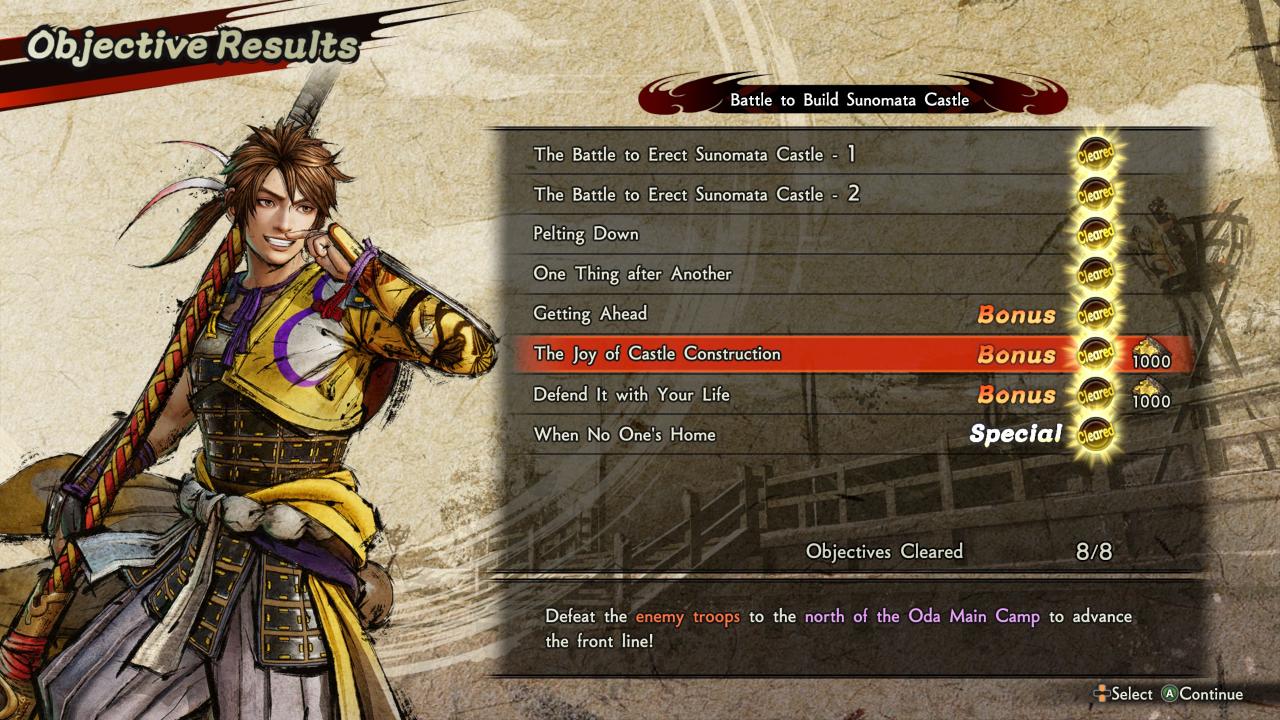 The Battle to Erect Sunomata Castle 1

The Battle to Erect Sunomata Castle 2

One Thing After Another

The Joy of Castle Building

Defend It With Your Life

When No One’s Home 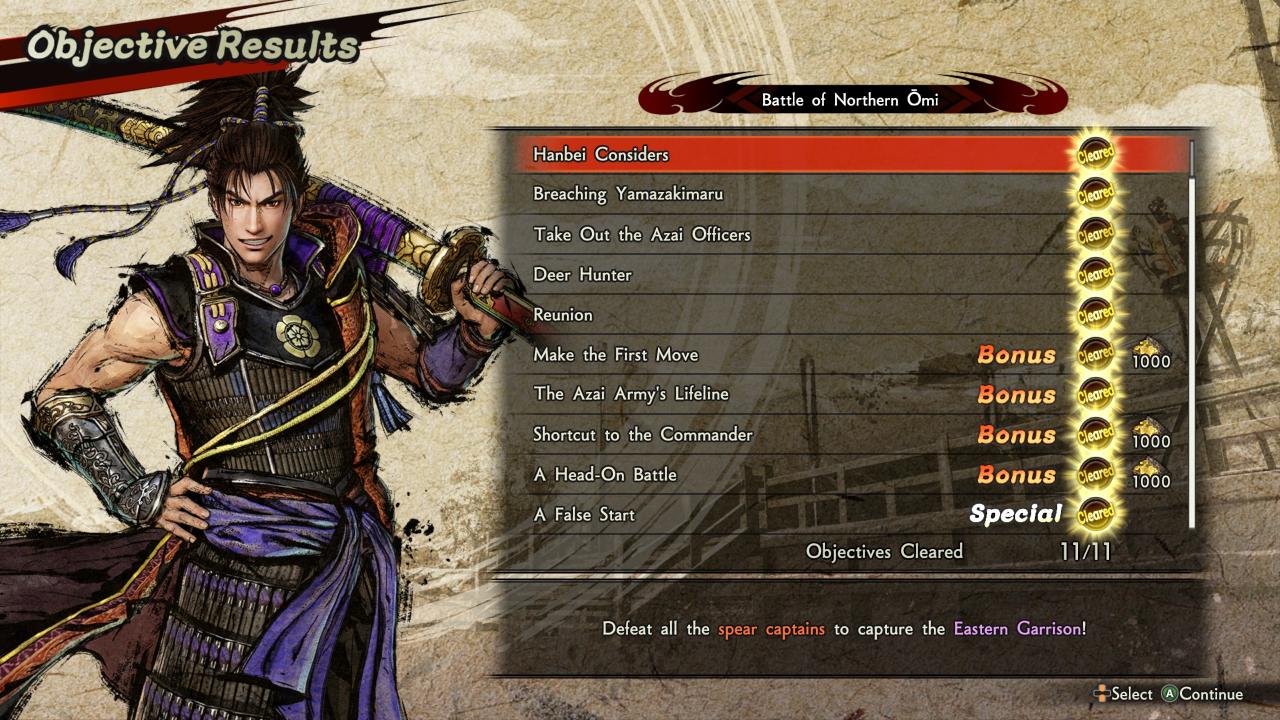 Objectives 11/11
NOTE: Very tricky here. Trigger “Breaching Yamazakimaru” but do not complete it, Trigger and finish “Azai Army’s Lifeline”. Triigger “Shortcut to Commander” by killing troops in that central area, but do not finish it. Then Finish “Breaching Yamazimaru”. This will trigger “Take Out the Azai Officers”.

NOTE2: The absence of Nobunaga in your team means you have only 10 Objections.

Take Out the Azai Officers

Shortcut to the Commander

A Head On Battle 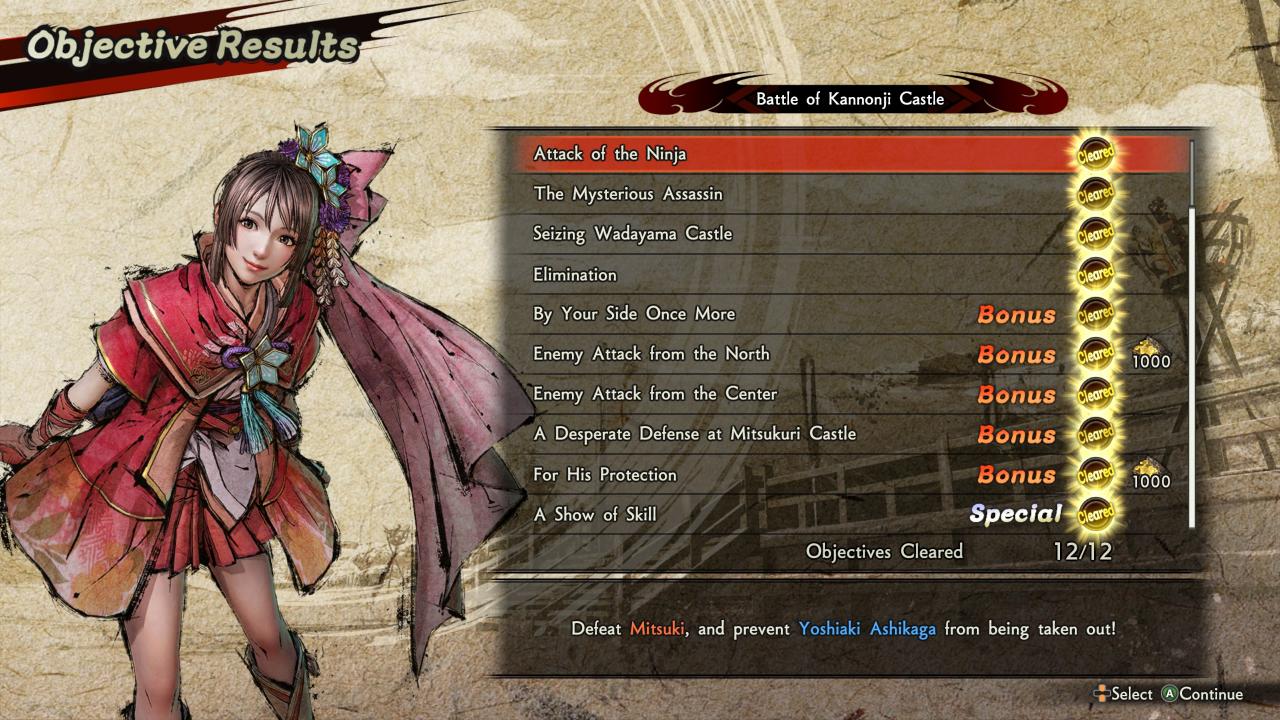 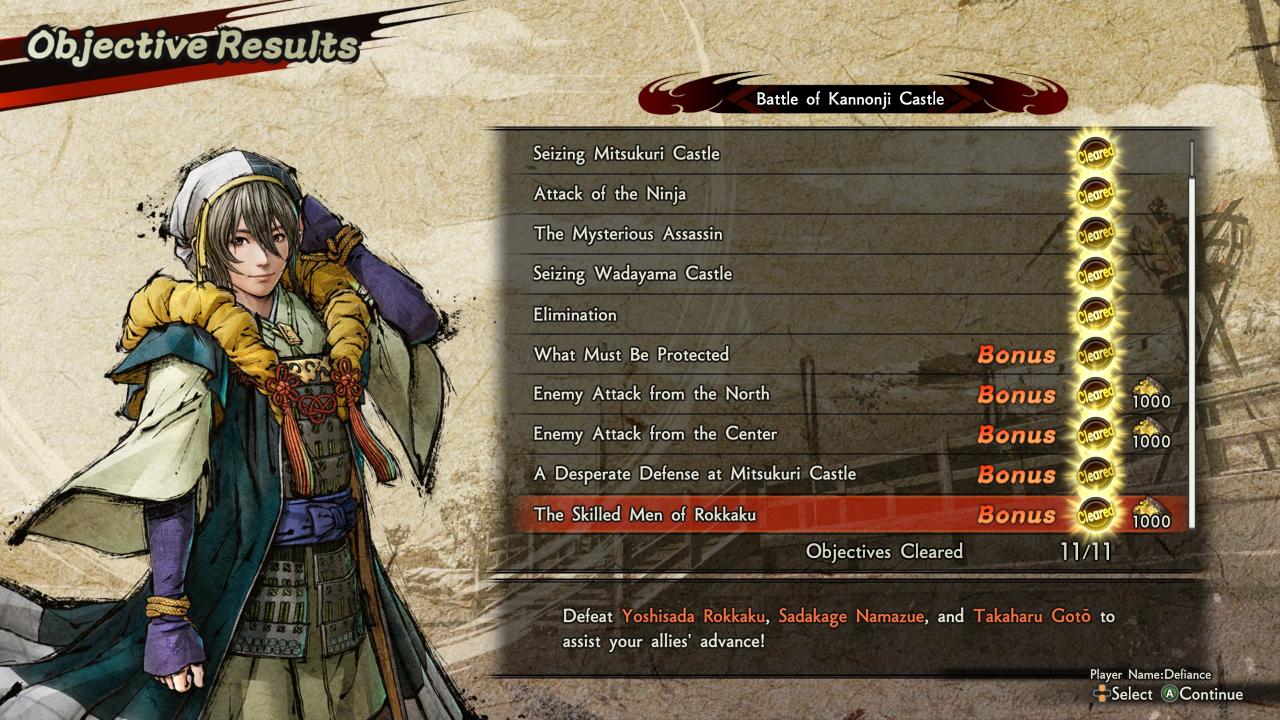 A Stepping Stone to Kannonji Castle

Attack of the Ninja

Bonus Objectives for All Characters

Enemy Attack from the North

Enemy Attack from the Center

A Desperate Defense at Mitsukuri Castle

Bonus Objectives for All Characters EXCEPT Oichi

What Must Be Protected

The Skilled Men of Rokkaku bonus

By Your Side Once More

A Show of Skill 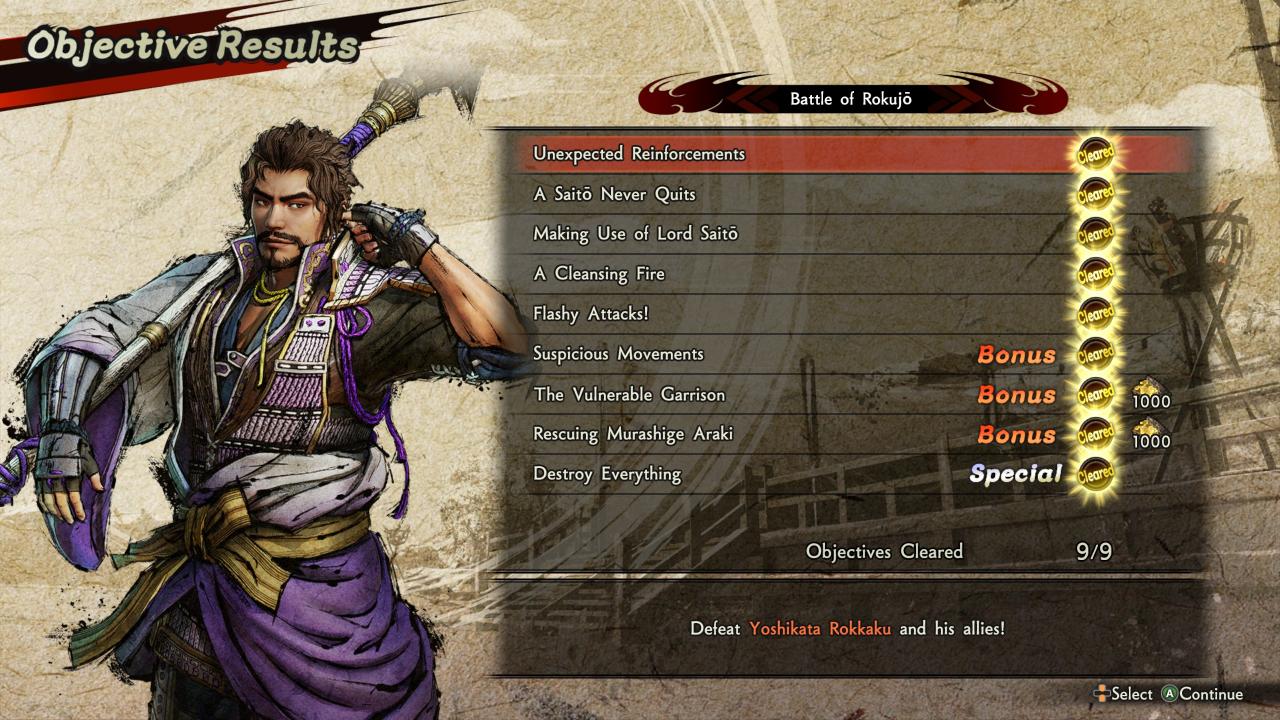 Making Use of Lord Saito 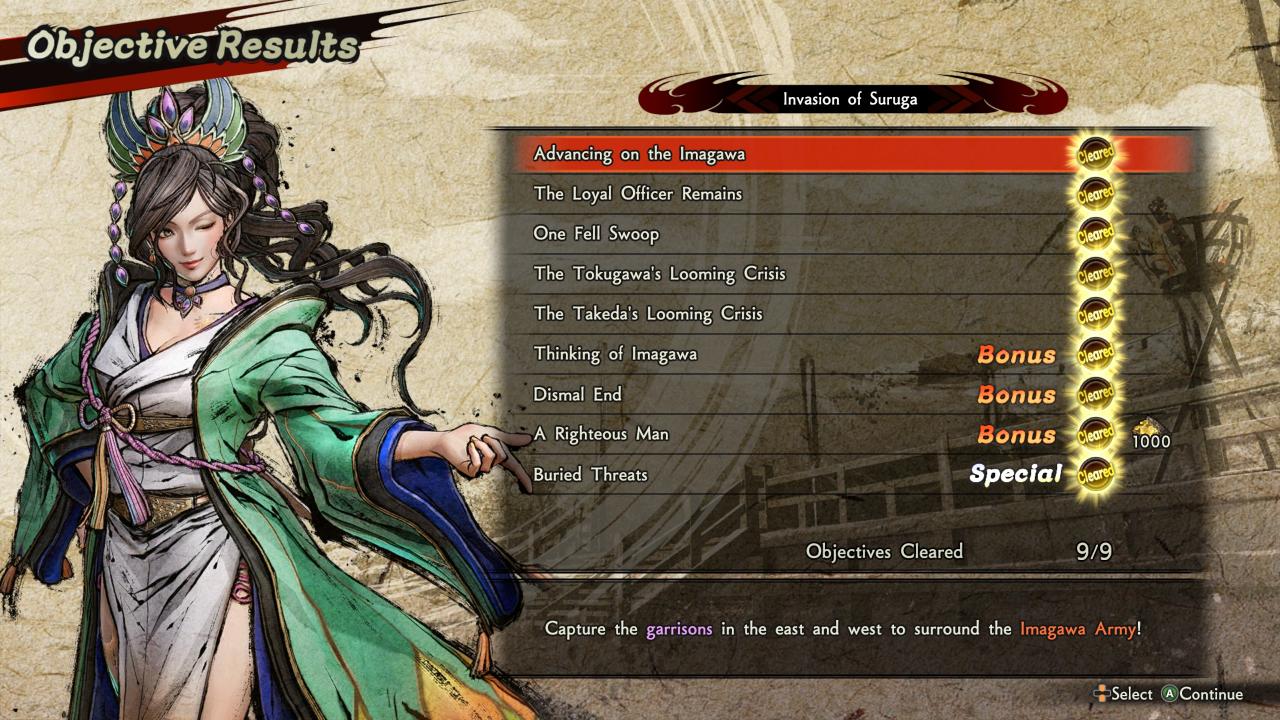 Advancing on the Imagawa 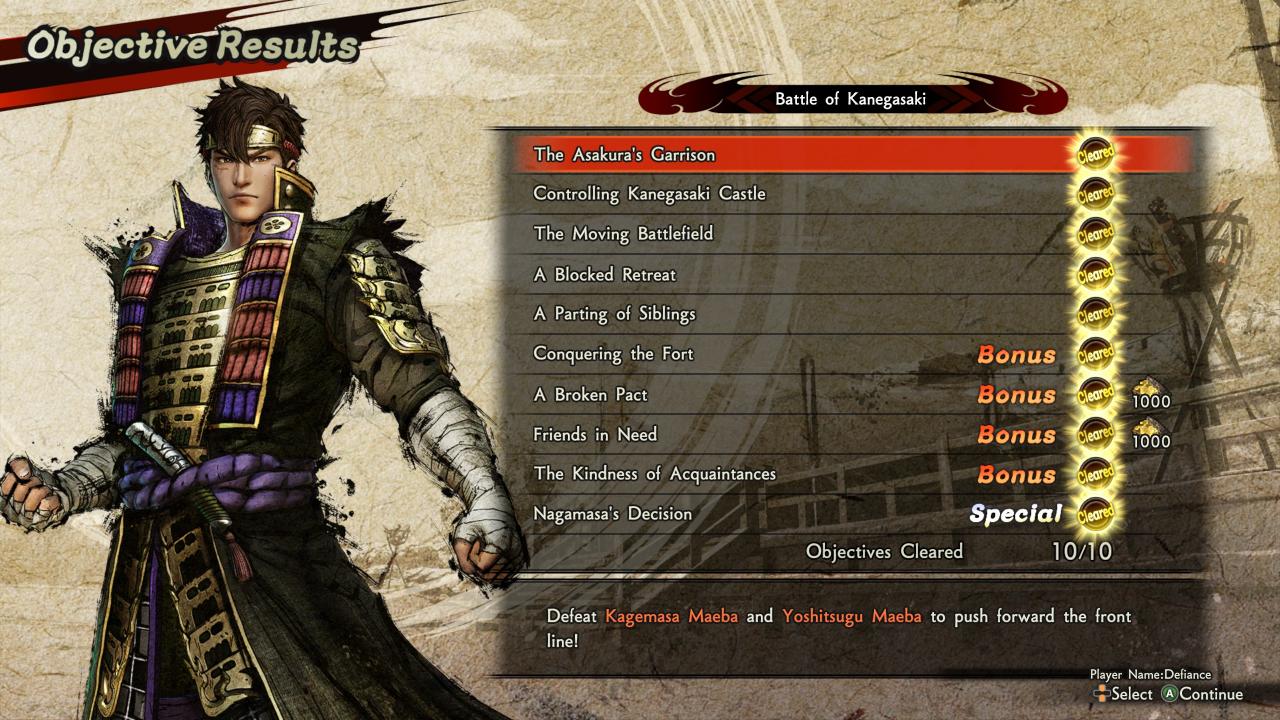 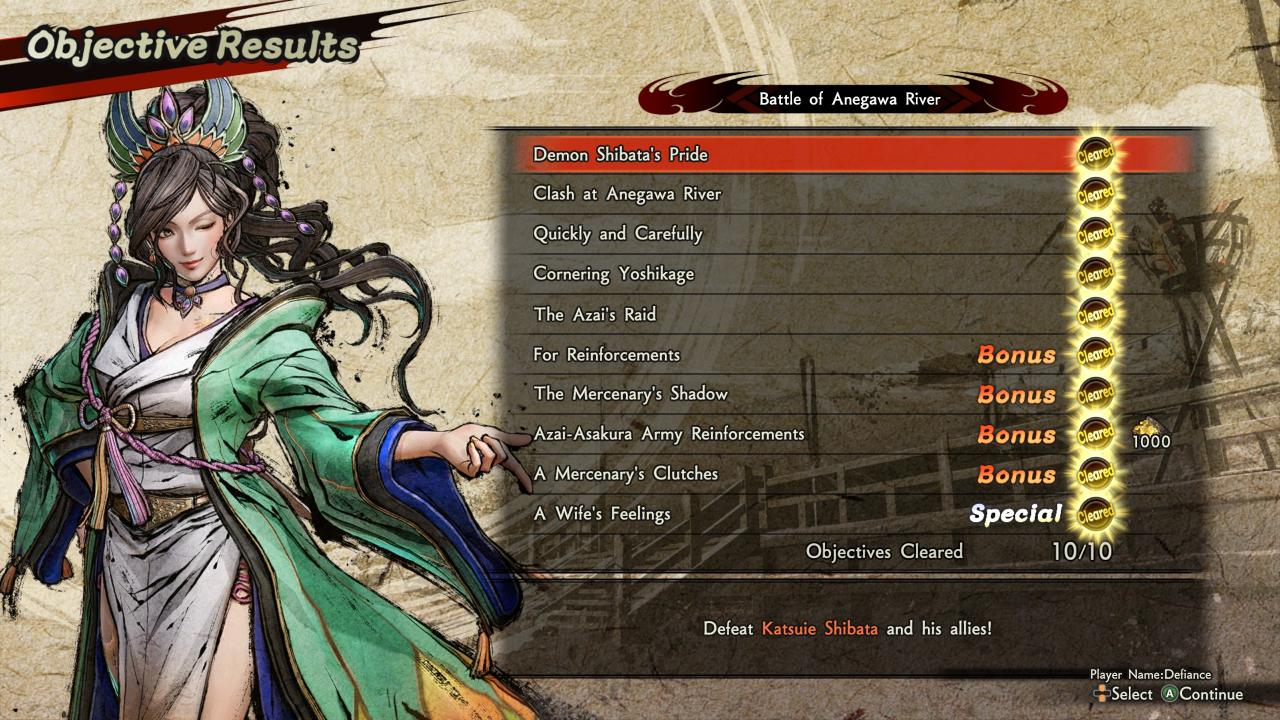 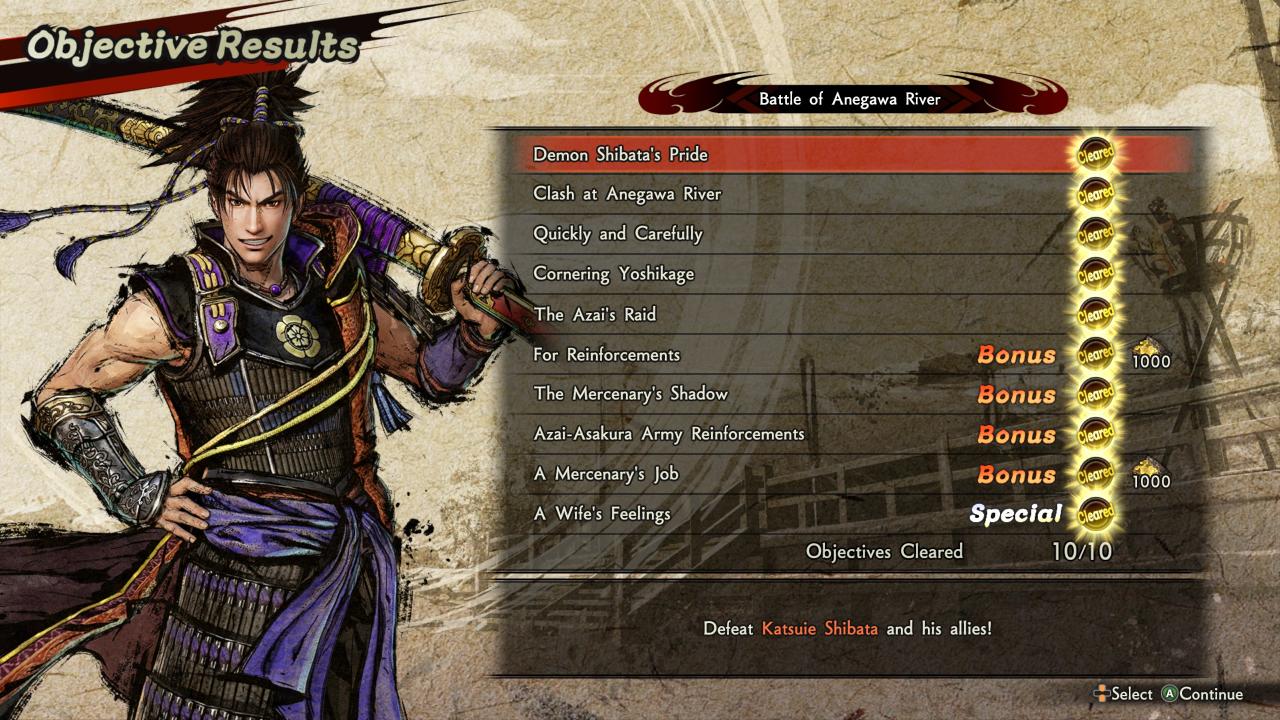 Objectives 11/11
NOTE: “A Mercenary’s ____” Objectives are interchangeable depending on Nobunaga’s participation. Meaning Stage has 11 Objectives, but you’ll only ever see 10 Objectives max on a playthrough.

The Scorching of Mt. Hei 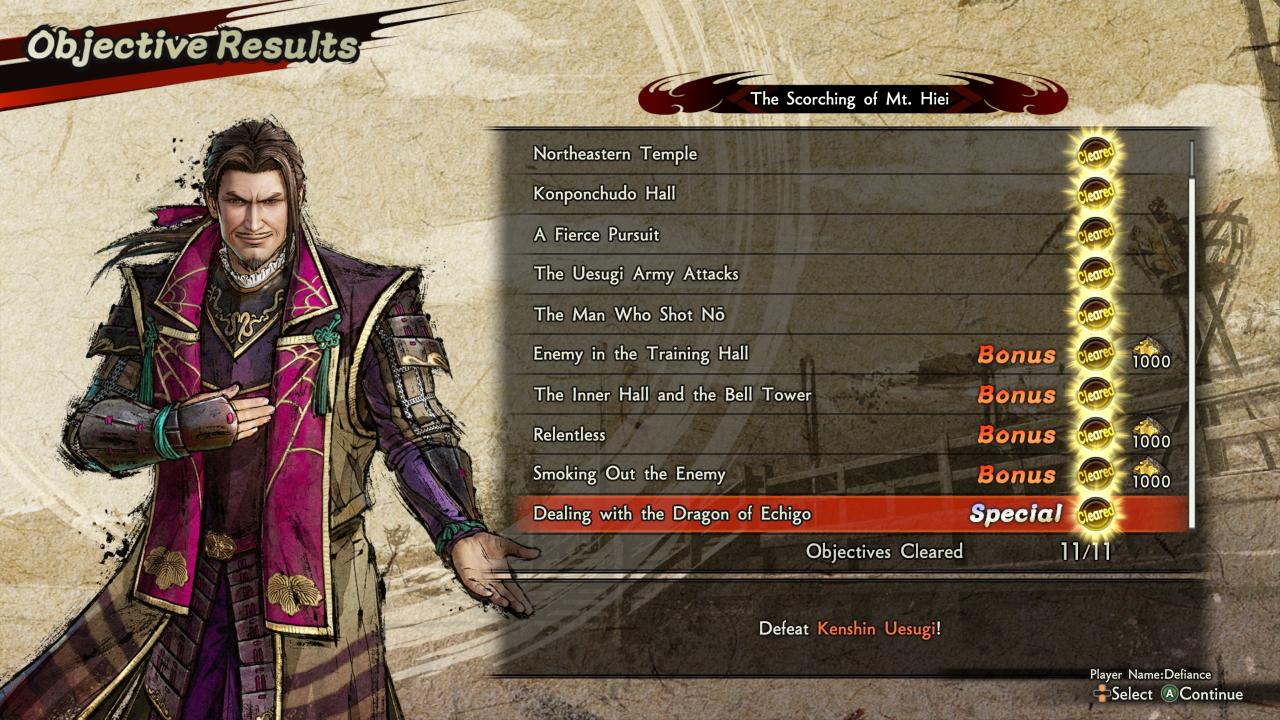 The Man Who Shot No

Enemy in the Training Hall

The Inner Hall and the Bell Tower

Smoking Out the Enemy

Dealing with the Dragon of Echigo 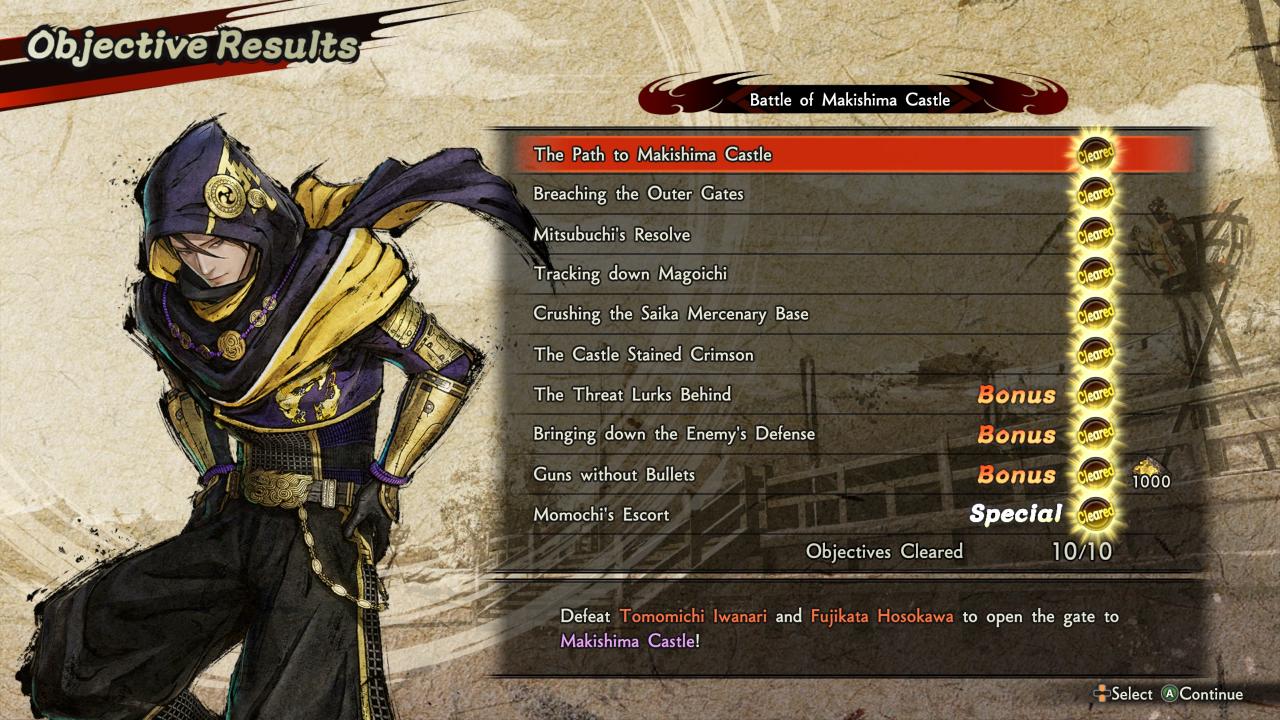 The Path to Makishima Castle

Crushing the Saika Mercenary Base

The Threat Lurks Behind

Bringing Down the Enemy’s Defenses 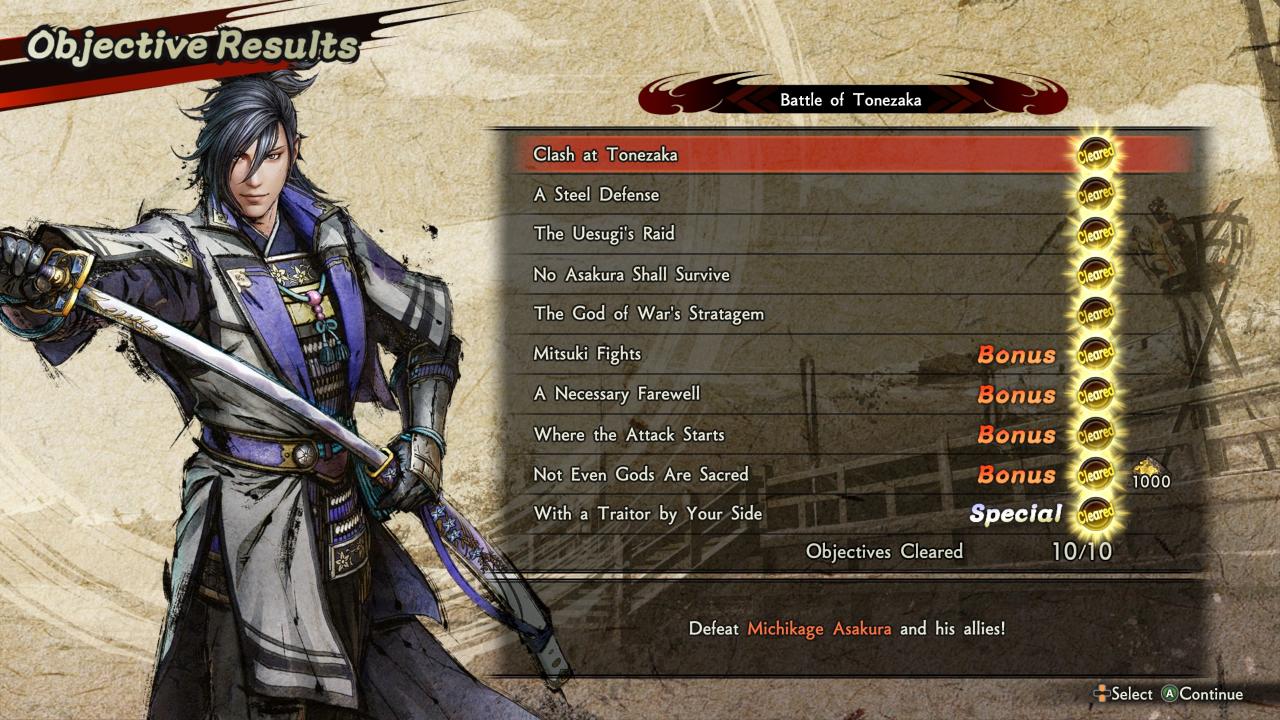 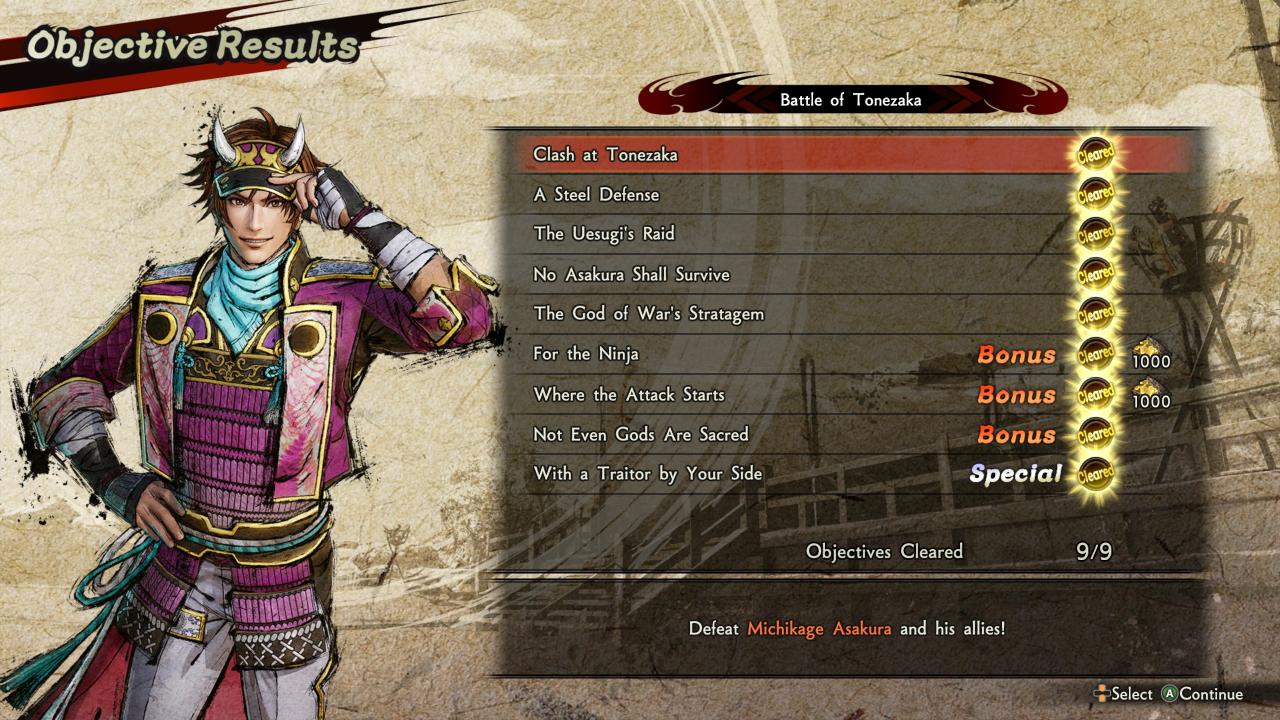 Objectives 11/11
NOTE: “Mitsuki Fights” and “For the Ninja” are interchangeable missions. With a playable Mitsu being the only trigger for “Mitsu Fights”.

No Asakura Shall Survive

The God of War’s Stratagem

Where the Attack Starts

Not Even Gods Are Sacred

With a Traitor by Your Side 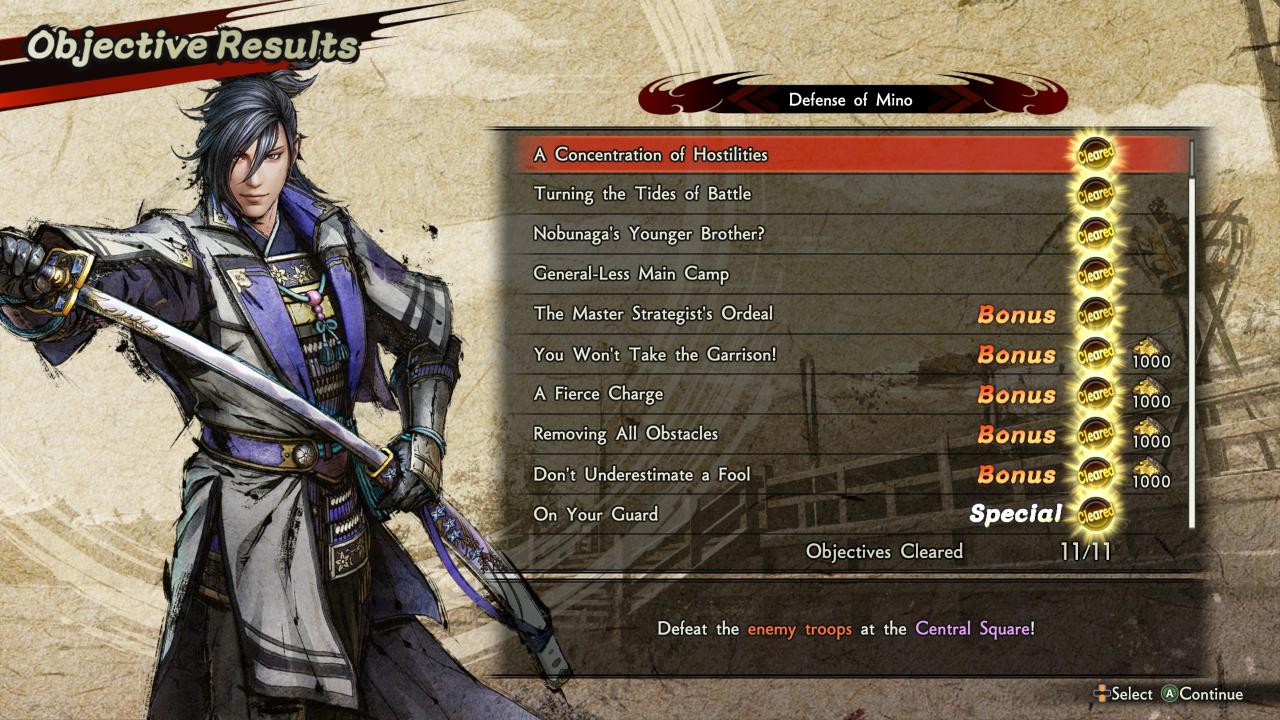 A Concentration of Hostilities

Turn the Tides of Battle

You Won’t Take The Fortress 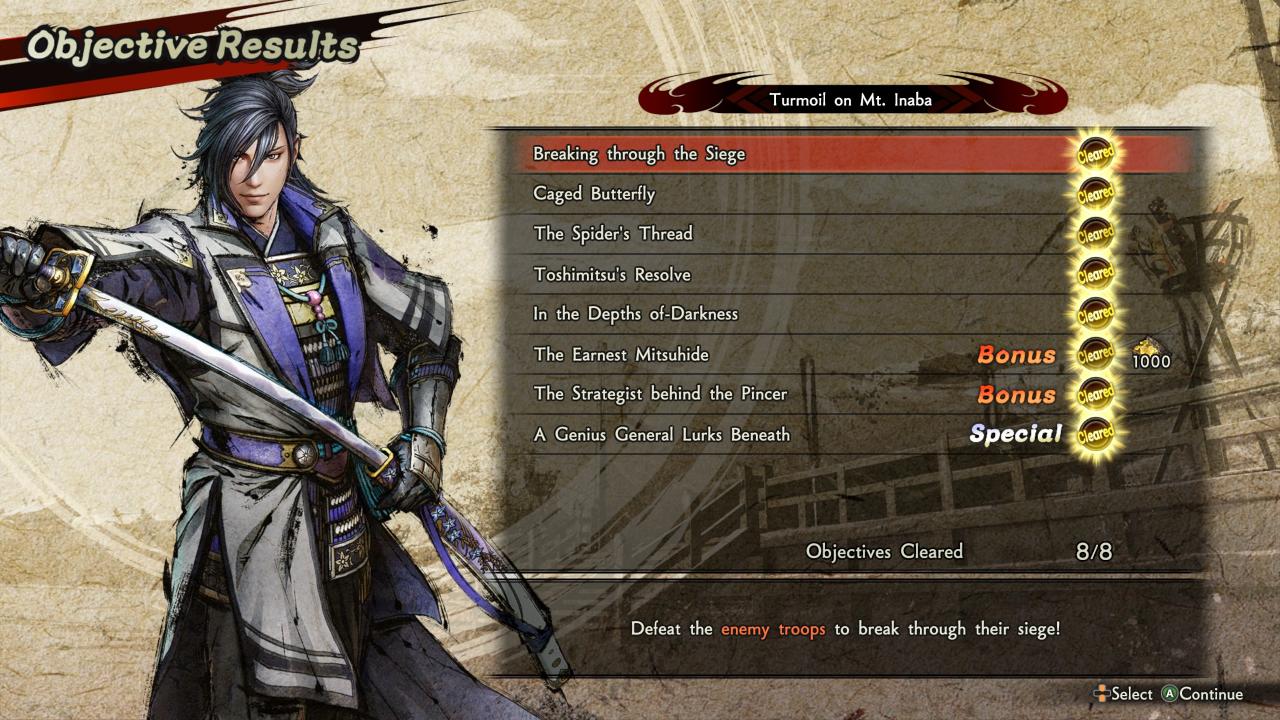 Breaking through the Seige

The Strategist behind the Pincer

A Genius General Lurks Beneath 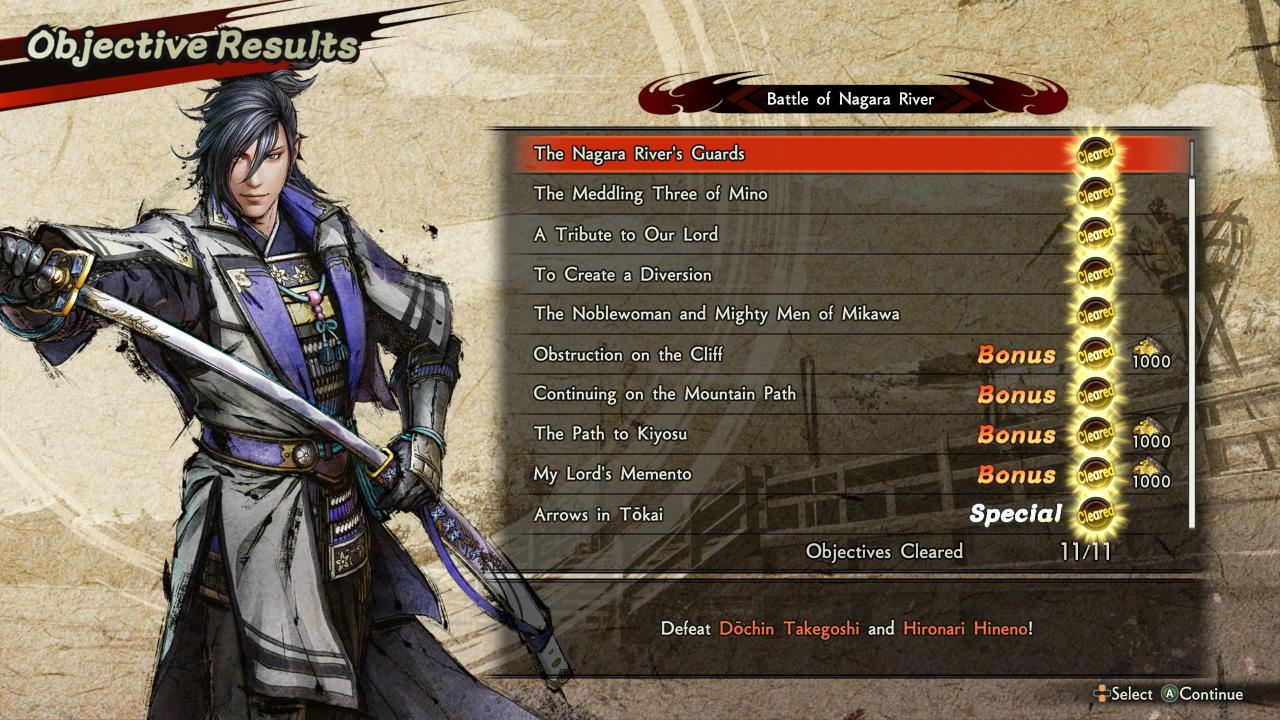 The Meddling Three of Mino

A Tribute to Our Lord

To Create a Diversion

The Noblewoman and Mighty Men OF Mikawa

Obstruction on the Cliff

Continuing on the Mountain Path 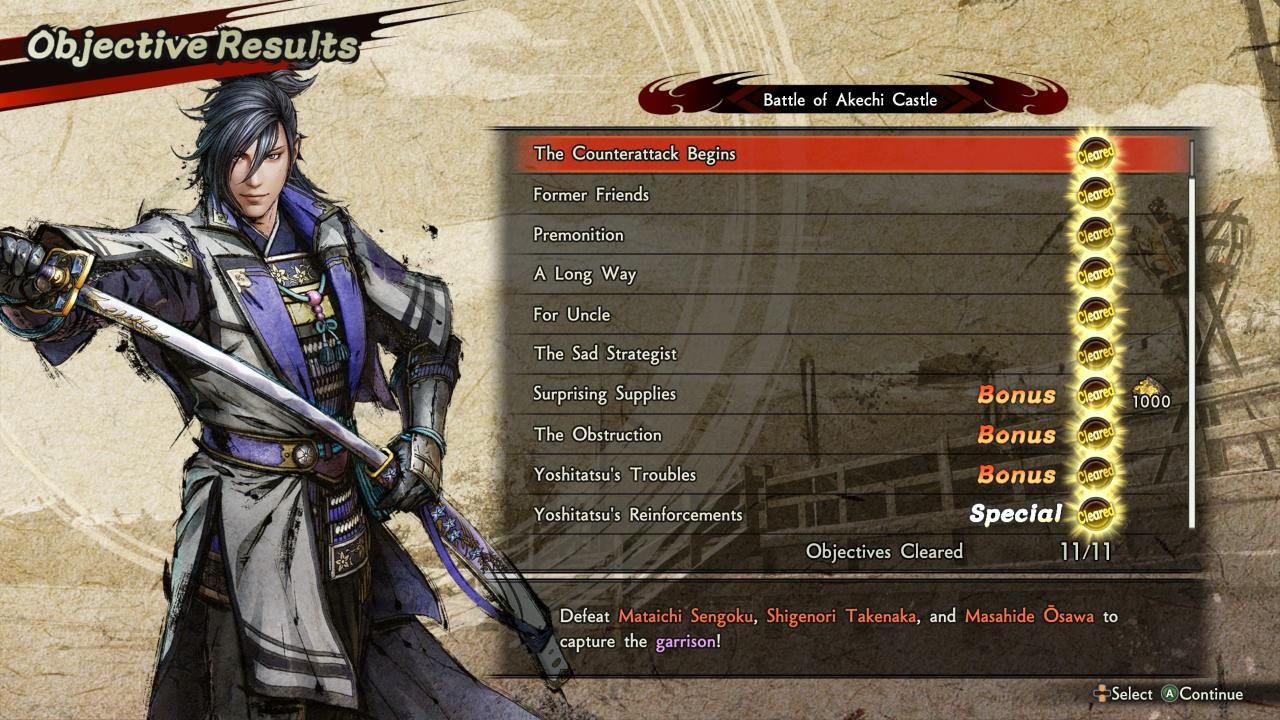 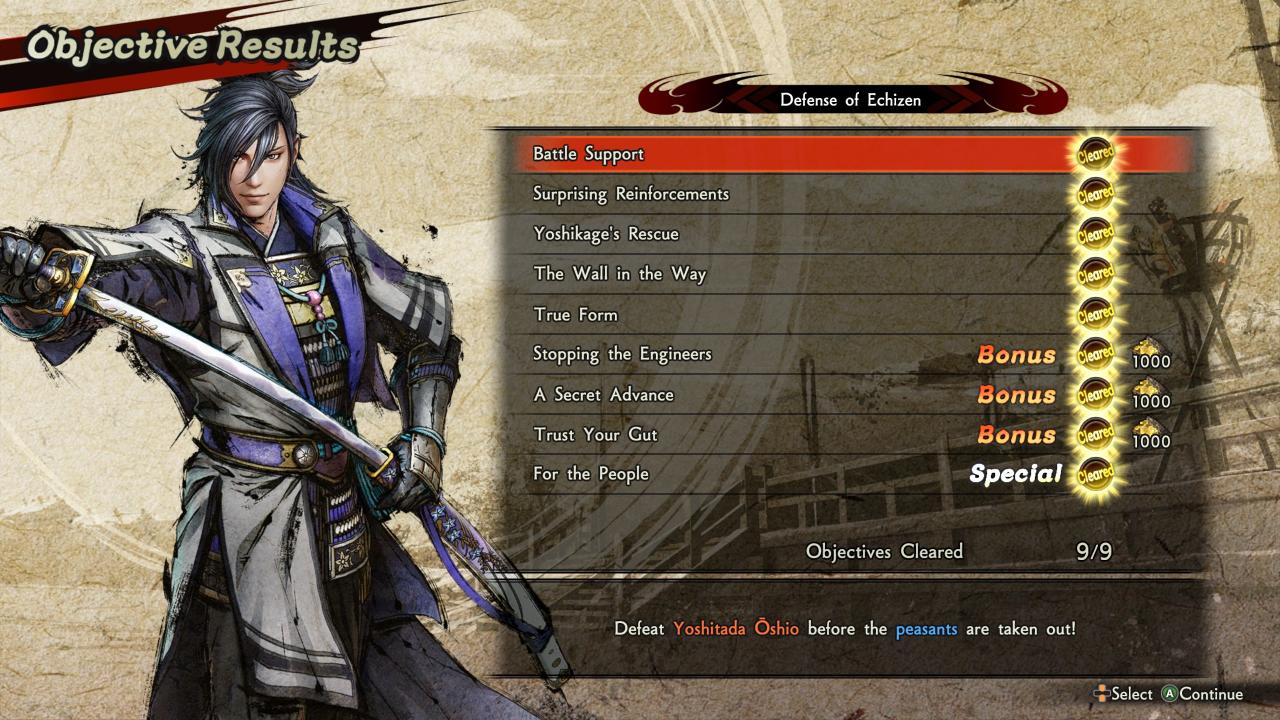 The Wall in the Way

That’s all we are sharing today in SAMURAI WARRIORS 5 Objective List Guide, if you have anything to add, please feel free to leave a comment below, you can also read the original article here,  all the credits goes to the original author bruticus0